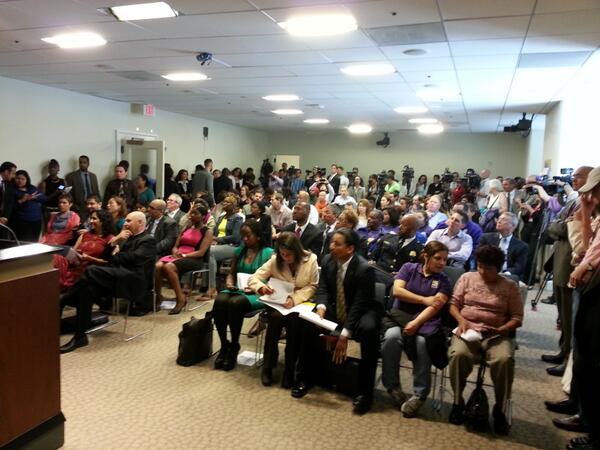 Gray certainly won plaudits galore from the immigrant, Hispanic and union advocates on hand, but he also watched as several advocates turned his “One City” motto back on him by calling for “one city, one license.”

The issue is that under Gray’s proposal, those city residents unable to prove their legal status would be issued a license or identification card with distinct markings indicating it is “not for federal identification purposes.” That would prevent holders from entering federal buildings or boarding airline flights — and it would, for all intents and purposes, identify them as illegal immigrants.

Labor leaders Joslyn Williams of the Metropolitan Washington AFL-CIO and Jaime Contreras of the Service Employees International Union 32BJ, among others, called on Gray to issue the same license to all city residents, regardless of their legal status.

“Our work here is not done,” said Sapna Pandya, executive director of the nonprofit Many Languages One Voice. “One license for one city.”

The problem is that a 2005 federal law, the REAL ID Act, placed new requirements on state-issued driver’s licenses and identification cards, including “evidence of lawful status” of the cardholder. Not complying with the law could put the District at risk of forfeiting federal funding or suffering other sanctions.

“I know it would not be good,” said D.C. Council member Mary Cheh (D-Ward 3), who leads the committee that will be handling the bill.

Gray said he appreciated the advocates’ concern: “It would be [the same license] if I had the authority to do it,” he said. But Gray cited both federal law and the prospect that Congress could move to nullify the bill, noting that he’s already heard objections from Capitol Hill — objections he declined to detail.

Making non-federal-marked licenses available, while not ideal, Gray argued, would allow the city’s estimated 25,000 unauthorized immigrants to lead more convenient and productive lives while making the roads safer by reducing the number of unlicensed drivers. Muddying the political waters by challenging REAL ID or provoking Congress, he said, would make that more difficult: “We want to stay on the subject.”

Cheh has set a June 6 hearing on the Graham/Mendelson bill, and she said the mayor’s proposal will be rolled into that. Gray called on the council to move the bill through to his desk by the time the council breaks for summer recess in mid-July.

The “one license” push could lead to some divisions as legislators take up the bill. While Cheh acknowledged the necessity of complying with REAL ID, Council Chairman Phil Mendelson (D) said he considered Gray’s bill “a companion” to legislation already introduced that would simply bar the Department of Motor Vehicles from asking for a Social Security number — a change that could make all D.C. licenses non-compliant.

Jim Graham (D-Ward 1), who co-introduced the older legislation with Mendelson, said the matter is “complex.”

“He and I both want one license,” he said of Gray. “The question is, what we can do within the existing law.”