Joe Biden’s prep team for Thursday’s vice presidential debate with his fellow Catholic Paul Ryan has asked him to resist the temptation to explain himself on the abortion issue. There are dangers in that thicket, and he mustn’t wander off into a disquisition on the various views of when life begins. (The plan instead? Stock answer, pivot. What could go wrong?) 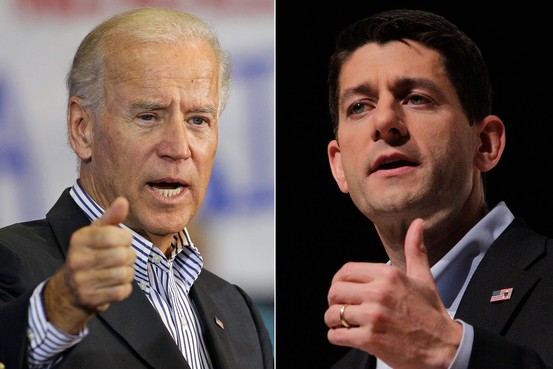 Plenty, of course. And with the momentum in Romney-Ryan’s favor, America’s first Catholic vice president is under even more pressure than the man who wants to become the second.

Both not only practice their common faith but have been shaped in important ways by it. “My idea of self, of family, of community, of the wider world comes straight from my faith,’’ Biden said in his book “Promises to Keep.’’ The vice president, whose mother once counseled him to put off any decision about the priesthood until after he’d gone on some dates, brought the rosary he prays with daily to the Situation Room as the Navy SEALs closed in on Osama bin Laden. He never misses Mass. His trip planners regularly scout for parishes where there’d be no big fuss over him — and no risk of him being denied Communion over his pro-choice politics.

Ryan, a former altar boy, is just as serious in his practice, and on the day his vice-presidential nomination was announced he was introduced by Mitt Romney as such: “A faithful Catholic, Paul believes in the worth and dignity of every human life.” The congressman and his wife, Janna, send their kids to their parish school in Janesville, Wis., and he has many friends in the clergy, including Cardinal Tim Dolan of New York.

Having grown up in the same culture, the two men almost certainly understand each other on a level no amount of briefing could provide. Yet they also almost perfectly embody the split in the American church as well as in American politics, with Biden representing the old-school, union-tied, Vatican II generation of Kennedy-loving Catholics whose focus is social justice and who are comfortable with questioning. He was praised for being the only kid in his ninth-grade theology class who copped to doubts about transubstantiation, and his mother also famously instructed him, when she heard he was meeting the pope, “Don’t you kiss his ring!”

Ryan, meanwhile, upholds the younger, more conservative, John Paul II-era, anti-abortion-focused Catholicism of the sonogram generation. It’s doubtful that the different faith-based emphases of these two running mates will influence the election much, despite the efforts of Ryan’s cheering section.

But the religious makeup of our country is being dramatically reshaped by politics. According to a Pew study released on Tuesday, Democrats are increasingly turned off by conservative politics coming at them from the pulpit, and they are fleeing all religious institutions they perceive as being co-opted by the right. Immigrants have so far allowed the Catholic Church to hold steady despite these defections, but one in five Americans now self-identifies as religiously unaffiliated, even if 68 percent of these folks also say that they believe in God. Their number is expected to keep growing, too, since among Americans under 30, one in three is now unaffiliated.

I certainly don’t see the church backing off of its criticism of the Obama administration in an effort to win back those members who have had their fill of homilies that make them squirm. But I am sorry that it takes two Catholic leaders to present the whole of church teaching, while the institution remains as divided as the two men who on Thursday will offer their competing visions of what matters, and what we ought to do about it.

What Biden could learn from Ryan is that the vice president’s insistence that he doesn’t want to impose his morality on anybody in a pluralistic country doesn’t really track; the Civil Rights Act imposed morality on lots of people who wanted no part of it, and thank goodness. And same-sex marriage is doing the same, isn’t it?

What Ryan could learn from Biden is that the leading cause of abortion in this country is poverty; once you recognize that cutting Medicaid would surely increase the number of financially struggling women who’d opt to have the procedure, the Catholic calculus even on that one issue isn’t so clear any more.

Many Catholics stick with the Republicans because they keep promising to overturn Roe v. Wade, but they don’t ever deliver on that promise, and won’t. As even strongly pro-choice Nancy Pelosi told me recently,  “Let’s face it, the Republicans have had the House, Senate and White House any number of times; they could have overturned Roe and they didn’t.’’

She’s right about that. And Catholic leaders such as Bishop Thomas Paprocki of Springfield, Ill., who recently wrote on the subject of abortion and the upcoming election that “a vote for a candidate who promotes actions or behaviors that are intrinsically evil . . . places the eternal salvation of your own soul in serious jeopardy” might consider whether 40 more years of supporting Republicans would bring any different result. (Lying is another ‘intrinsic evil,’ but I happen to believe Romney was telling the truth when he told the Des Moines Register that regulating abortion was not on his agenda.)

Meanwhile, the more outspoken “Fox News bishops” and priests are not only running off those Catholics who don’t agree with them, but are unwittingly whittling away at their own influence with the increasingly secular Democratic Party. Keep it up, and strong Catholic voices like that of Biden, who argued against the Health and Human Services mandate as it was written, will have less leverage. And as time goes on, there will be fewer Joe Bidens inside the party who will pick up the phone when a bishop calls.