I don’t want to talk about Liza Long.

She’s the blogger whose post, “I am Adam Lanza’s mother,” went viral this weekend, spawning harsh criticism and resulting in a joint statement by Long and writer Sarah Kendzior Tuesday expressing “the need for a respectful national conversation on mental health.”

But I do want to talk about mental illness. I want to tell the stories from two friends who decided to go public with their families’ struggles after Long’s post. Because this can happen to any family. Anywhere. Any time.

I knew Holly Barstow’s brother in high school as one of the popular kids, smart, funny and handsome. But he’s always been “wired differently,” Barstow, who lives in Omaha now, told me. He could throw a fit lasting five hours as a child and later “could play tennis for seven hours until he looked down and saw blood coming out of his tennis shoes.”

Turned out it was the manic phase of bipolar disorder that gave him such energy.

After the breakup of his second marriage, he began drinking. After the third marriage ended, the man who’d earned a master’s degree and had a successful career in public administration became homeless. He moved in with their mother eight years ago in the small Missouri town where we all grew up. He’d been fascinated by guns and had collected them until he owned 47. Barstow heard he would dress in fatigues and a bandolier, wandering around town with weapons, once even entering the local Catholic elementary school. “He was so out of touch with reality,” she said.

Barstow admits she didn’t know a lot about mental illness. “But I’m the daughter of a librarian,” and so she learned. She also went to the county sheriff — “a godsend, he was so wonderful and so calm” — and asked for his help. He reached into a drawer and pulled out multiple pages referring to her brother’s activities. Her brother couldn’t be arrested until he broke a law, but he was being watched — by the sheriff’s office, the local police and the state highway patrol.

Barstow’s mother realized just how “horrible” his situation was after he left her at a rest area on Interstate 70 because she didn’t believe he “was the 13th Jesus.”

That’s when Barstow filed papers at the courthouse to have her brother involuntarily committed for 72 hours — the only step she could take to ensure the safety of those around him. She hand wrote eight pages of explanation; the county clerk looked it over and said, “The part about being the 13th Jesus would have been enough.”

While her brother was held in the nearest psychiatric facility, she and a family friend hid his guns. “I’m nervous as a cat around guns,” she admits, but she knew they had to do this. He was soon released, however, even though he apparently refused all counseling and all medication.

Since then, her brother has discovered a loophole in Missouri law: You can buy “antique” guns without a background check. Barstow doesn’t understand it. “As if an antique gun shoots you any less dead?” Her brother now owns at least seven antique firearms.

He was approved for disability in less than two weeks, a fight that often takes years, and is living in an apartment on the other side of the state. She’s frustrated. “The law has swung so far the other way from the days when the state could order a lobotomy.” And Barstow admits that she’s worried something terrible might happen.

She’s satisfied at her diligence. “But everything that I did? To what end?”

My other friend, Jean, who doesn’t want her last name used, isn’t worried about her daughter hurting others as much as hurting herself through suicide.

Long’s blog post struck a nerve with her. “I get it,” she told me. “You don’t understand unless you’ve hidden every knife in the house, every pair of scissors, the car keys, all the medications, even the vitamins.

“Most people have no idea what kind of hell we’re living in.” 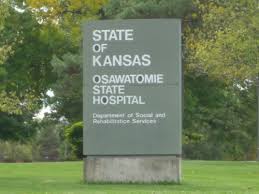 Osawatomie State Hospital is one of the nearest psychiatric hospitals in Kansas for Nancy’s daughter.

She’s been told the only option when her daughter Maria is dangerous is to commit her once again to a local psychiatric hospital.

Maria, now 21, was diagnosed with bipolar disorder at the age of 12. Back then, the family tended to keep it quiet. “I had a couple of friends who wouldn’t let their daughters be friends with mine when they heard,” Jean said.

Maria made it through high school with help from the school nurse, counselor and a resource teacher “who understood her.” Ironically, there are more services for those under 18 with mental health issues.

Last year, she “snapped” and ran her car into a pole on Easter Sunday in a suicide attempt. No one really understands why, although one psychiatrist said to try to keep her alive until the age of 25, when things seem to improve for many patients.

Since then, she’s been admitted to local psychiatric hospitals a total of nine times, twice forced through the legal system. She stays for 10 days, gets stabilized on medications and is sent home. “There are 40 people wanting each of those beds in the state hospitals,” Jean said she’s been told.

And some of those patients released are given a bus token — to go downtown to the homeless shelter.

This fall Maria spent two and a half months in a residential treatment facility in Atlanta until she jumped out of a second-floor window and was then released because “she wasn’t well enough to be treated there.”

They drove home from Atlanta “with bungee cords through the car doors” so she couldn’t jump out of the vehicle in traffic, Jean said. The next day Maria took 78 Benadryl pills.

Jean, who has a master’s in social work, understands the choices, limited as they are. And she’s frustrated. “Is there no help here?”

She knows mental illness is more common than you would believe, and can cite examples of other friends. According to the National Institute of Mental Health, one in four adults suffers from a mental illness in any given year, while one in 17 has a serious mental disorder.

Yet no one except the extremely wealthy can qualify for long-term care. Jean cites 25 residential treatment facilities in the country, with price tags ranging from $15,000 to $40,000 a month — and waiting lists.

“If I won the lottery, I would establish a treatment center where the doctor, the psychiatrist, the psychologist were connected and would work as a treatment group, not as individuals as they do in the Kansas City area,” she said.

They have found some help through Johnson County Mental Health, a public agency serving the middle-class suburbs near Kansas City. But Maria has two caseworkers and a psychologist, equating to three hours of help a week, and budget cuts threaten those services.

Jean once told an ER nurse, “I almost wish she had cancer. Then they’d do blood tests and X-rays and biopsies, and there would be chemo and radiation and a game plan.” As she recounted the story to me, her voice broke. “Our friends would bring us casseroles and surround us with love and support.”

The nurse then asked how to help.

“Heal her,” Jean said. “But there’s no healing with this.”

And there are no casseroles.