One of the most memorable aspects so far of the 2020 presidential campaigns has been their merchandise: Elizabeth Warren’s "Billionaire tears" mug. Amy Klobuchar’s branded ice scraper. And, of course, President Trump’s iconic red hat.

The proliferation of slogan-emblazoned products is perhaps not surprising, considering that we are in the era of influencers and memes. Not to mention that the eventual Democratic nominee will compete against a former marketing mogul whose savvy campaign branding helped pave his way to the White House.

But they aren’t just eye-catching conversation starters. Sales of official merchandise are considered campaign contributions, and these items have played a big role in the presidential candidates’ fundraising.

Here’s what the candidates’ merchandising may tell us about their campaign strategies.

President Trump took campaign merch to a new level during his 2016 campaign. His signature "Make America Great Again" hats were seemingly everywhere. Since then, Trump’s reelection campaign has figured out how to produce merchandise quickly, capitalizing on his supporters’ outrage. For instance, it made Trump-branded plastic straws after restaurants began banning them for harming aquatic life.

While running for reelection, he has refashioned his slogan: "Keep America Great." Also among the products that have helped generate millions of dollars for Trump’s campaign is a T-shirt bearing an unflattering likeness of the House impeachment manager, Rep. Adam B. Schiff (D-Calif.). These sales have been a key part of his successful low-dollar fundraising machine. Prices: $15 for a 10 pack of straws, $30 for the shirt and $29 for the hat.

In January, people wait in line for an "Evangelicals for Trump" rally in Miami.Scott McIntyre for The Washington Post

Laura Demint, 47, dons earrings with Trump’s face as she waits in December for the president to hold a rally in Battle Creek, Mich.Brittany Greeson for The Washington Post

A merchandise booth is set up before Trump speaks at a rally in Fayetteville, N.C.Jabin Botsford/The Washington Post

Just as he did in 2016, Sen. Bernie Sanders (I-Vt.) is using merchandise to promote an image designed to inspire his devoted following of voters. His campaign gear plays off the candidate’s iconic silhouette — ruffled hairstyle, slightly hunched posture or raised fist — and also reflects the youth of his base.

The "Tio Bernie" T-shirts are a sign of his 2020 campaign’s emphasis on galvanizing young Latino voters, who were crucial to his win in the Nevada caucuses. And an edgy poster promoted his appearance alongside New York rock band the Strokes. Prices: $27 for the poster, $27 for the T-shirt and $5 for the sticker.

Volunteers in Des Moines on Feb. 3 load a large sign that will be hanged at a precinct for Sen Bernie Sanders (I-Vt.).Salwan Georges/The Washington Post

Aaron Beckwith shows off his socks before Sanders gives a speech in Milford, N.H.Sarah Rice for The Washington Post

Sen. Elizabeth Warren’s rejection of corporate and special interests has become a centerpiece of her campaign, which is evident in her merchandise. In fact, Warren (D-Mass.) was often filmed drinking out of her "Billionaire Tears" mug as she called donors giving as little as $5 — underscoring her strategy not to woo wealthy donors by courting them at private fundraisers.

As Warren faced questions of electability that were largely based on her gender, she began leaning into being one of the few female candidates left standing — and her campaign merchandise reflected this strategy. Prices: $25 for the mug, $25 for the onesie and $12 for the button.

A person holds a Warren pin at a caucus site in Henderson, Nev.Melina Mara/The Washington Post

A girl holds a Warren poster at a town hall in Muscatine, Iowa, on Jan. 25.Melina Mara/The Washington Post

Sen. Amy Klobuchar (D) has embraced her Midwestern identity on the campaign trail, even employing her own recipe for a popular Minnesota meal: "Hot dish is a great unifier — just like Amy." Her campaign has hosted hot dish house parties to attract voters and is selling tea towels emblazoned with her signature recipe, which includes a lot of tater tots and cheese.

Klobuchar announced her presidential campaign in the midst of a blizzard and freezing temperatures in her home state of Minnesota. The weather conditions helped drive home her campaign’s core message: that she has the Midwestern "grit" and resilience necessary to become the country’s commander in chief. Prices: $50 for the sweater, $12 for the tea towel, and $10 for the ice scraper and mitt.

Shortly after announcing his bid, Pete Buttigieg released his "Rules of the Road" that describes 10 values he said would guide his candidacy, aiming to make presidential character and temperament a cornerstone of his messaging. Among his campaign items is a pack of 10 pencils, each identifying a value, such as "Responsibility."

When Buttigieg started campaigning, a lot of people didn’t know how to pronounce his last name. So his early campaign strategy focused on familiarizing voters with the name of the then-mayor of South Bend, Ind., including a phonetic breakdown of it. Prices: $27 for the shirt, $15 for the pencil set and $14 for the socks.

A supporter waits to greet Buttigieg at a town hall on Jan. 20 in Pella, Iowa.Matt McClain/The Washington Post

Buttigieg supporters wait for results to come in for the Iowa caucuses.Matt McClain/The Washington Post

Billionaire Mike Bloomberg has an unconventional campaign strategy: skipping the first four nominating contests and instead running more than $500 million in advertising aimed at Super Tuesday states, like the ones featured on T-shirts below. The former New York mayor, one of the wealthiest people in the world, is self-funding his campaign. His campaign is not taking any donations and is selling gear at face value.

Other items carry slogans that reflect his identity, including his Jewish heritage (the hat above says "Mike" in Hebrew), his financial data empire ("In God We Trust. Everyone Else Bring Data"), his executive experience ("Mike Will Get It Done"), and his advocacy for stricter gun-control laws and climate change policies. Prices: $22 for the shirt, $20 for the hat and $10 for the mug.

Shirts for Mike Bloomberg are given out at a rally on Jan. 15 in New York City.Scott Heins/Getty Images

A bowl of pins and other campaign items are placed on a table for Bloomberg supporters.Toni L. Sandys/The Washington Post

Former vice president Joe Biden’s campaign has emphasized substance over style, saying he is opting not to focus on crowd sizes, viral moments or flashy campaign slogans. His campaign merchandising reflects his no-frills campaign strategy, including T-shirts carrying messages of "hope over fear," "science over fiction" and "truth over lies."

Perusing through his merchandise store, there is not much "malarkey" to be found: The items mostly depict his signature Ray-Ban aviator sunglasses or simply carry his name. There’s not a huge variety of items, either. Biden’s campaign declined to send items to be featured in this story. Price: $6 for two pins.

The Washington Post selected items from the campaigns’ online stores to feature in this story. Each campaign was asked to ship those items, along with others they believed were important to their strategies. The items were returned after they had been photographed. Every campaign but Biden's participated in this story.

Washington Post photographer Toni Sandys spent 55 hours behind the scenes with Michael Bloomberg on the 2020 presidential campaign trail. Here’s what she saw. 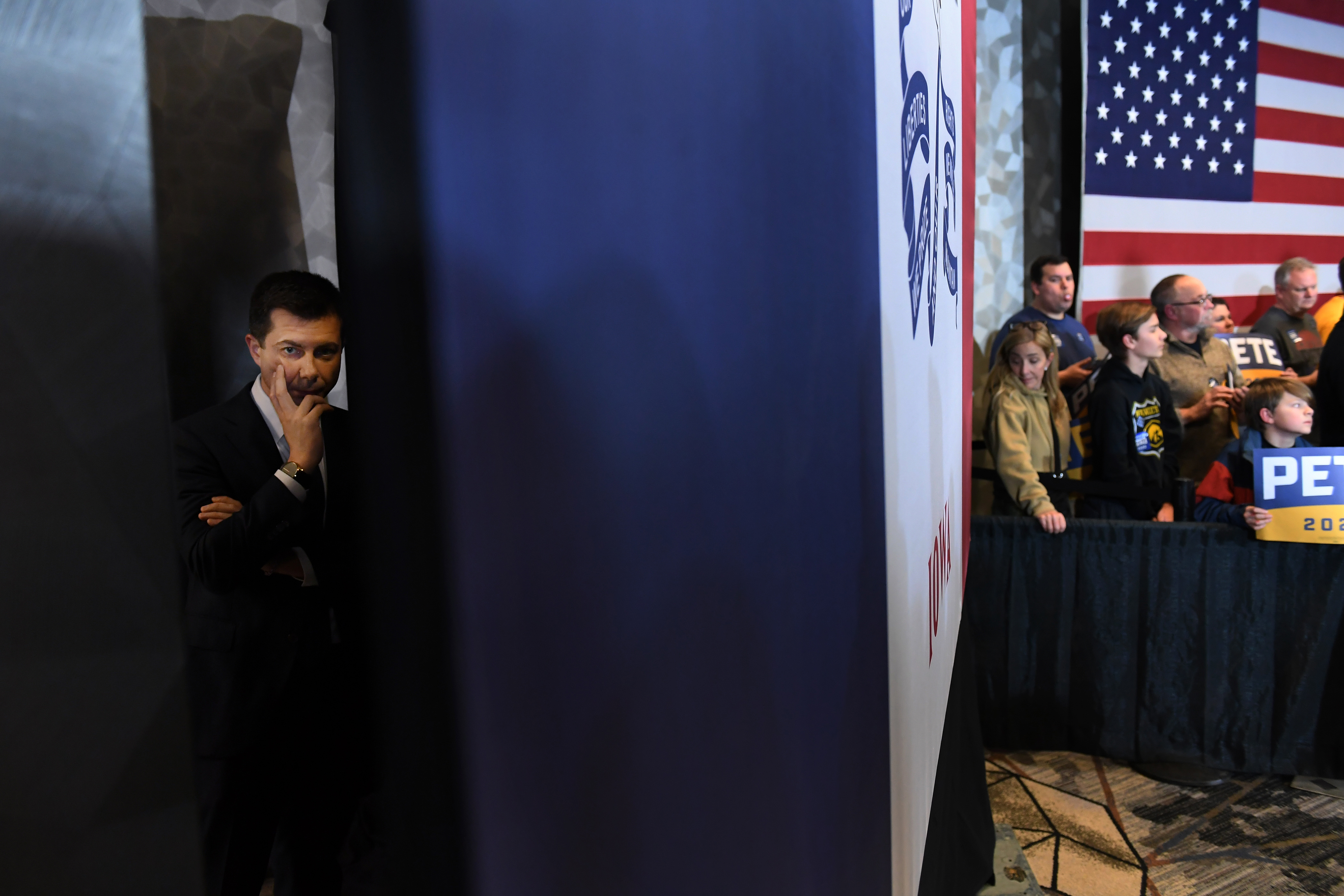 From impeachment to Iowa: Inside Klobuchar’s cross-country campaign

Sen. Amy Klobuchar, along with three of her colleagues, is trying to do something no one in history has tried: running for president in the final days before voting begins in the Democratic primary, and serving as a juror in President Trump's impeachment trial at the same time.