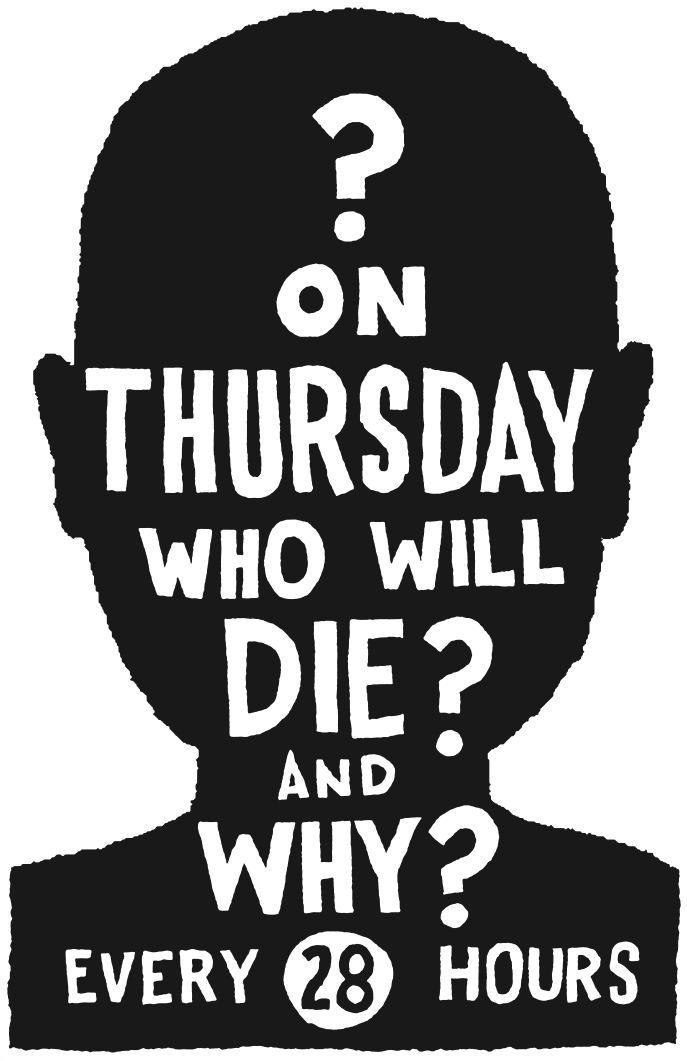 "why you gotta be so morbid Renee?" "You shouldn't be so negative Renee." Last I checked the truth wasn't pleasant. #every28hours #blacklivesmatter

Search the phrase “every 28 hours” on Google, Twitter, Instagram or Facebook and thousands of messages like these will come up. This is the phrase that has gone viral after police-involved killings of black males in Ferguson, Mo., and Staten Island, N.Y.: “Every 28 hours, an unarmed black person is killed by police.” It is now being used to describe the deaths of two New York City police officers, to draw comparisons between the deaths of police and deaths of unarmed African Americans killed by police.

PolitiFact rated this claim false in August when a CNN commentator Marc Lamont Hill said it on air. Hill corrected his statement after the PolitiFact article.

Yet the claim is still being perpetuated widely. It’s written on signs at protests, shared through #every28hours or written on social media memes. Where did this statement come from, and is it accurate?

The figure “every 28 hours” comes from an April 2013 report titled “Operation Ghetto Storm” by the Malcolm X Grassroots Movement. The report analyzed officer-involved killings of African-American victims in 2012. The report “is a window offering a cold, hard, and fact-based view into the thinking and practice of a government and a society that will spare no cost to control the lives of Black people,” according to the preface.

It’s not hard to debunk the claims using basic findings and methodologies from the report. (Twitter user @FeministaJones did it in a series of tweets using Storify.)

The report looked at the deaths of 313 African-American men, women and children in 2012, who were killed by police officers, security guards or “vigilantes.” Vigilantes are defined “self-appointed enforcers of the law” who had immunity under self-defense legal protections such as the stand-your-ground law or the castle doctrine.

The “every 28 hours” figure is being quoted by thousands of people, including those who accurately cite the figure based on the report’s findings.

The report’s author, Arlene Eisen, wrote in an article in September that the use of “every 28 hours” as a standalone figure oversimplifies the point made in her report, which was to “prevent future extrajudicial killings of Black people by those paid or sanctioned (security guards and vigilantes) by the national security state, it is important to know that these killings are a result of the perpetual war on Black people.”

There is no accurate or comprehensive figure for the rate of homicides by police in the United States. The Killed By Police Facebook page posts news reports of officer-involved homicides starting May 1, 2013. The FBI’s database is limited, and uses self-reported and conservative estimates. It’s even more difficult to accurately study the racial breakdowns of victims who were killed by police. Even so, the data yield an interesting statistic: A white police officer killed a black person nearly two times a week during a seven-year period ending in 2012, according to a USA Today review of the most recent accounts of justifiable homicide reported to the FBI.

In the absence of reliable official reports, it might make some sense that protesters turned to Eisen’s research of news articles, police department announcements, obituaries, interviews with crime beat reporters, social media postings and other sources.

Yet the methodology of this report is curious.

It takes into account deaths that do not seem to fit into the report’s description of “thinking and practice of a government and a society that will spare no cost to control the lives of Black people.” For example, a 24-year-old woman died in July 2012 at her birthday party, where she hugged an off-duty police officer from behind. He was carrying a loaded gun, which allegedly went off and killed her. A 59-year-old woman died after she was hit by a police officer driving his patrol car responding to an emergency call. A 31-year-old man was fatally shot by police when he ignored commands to stop eating a homeless man’s face.

When The Fact Checker inquired how Eisen arrived at the cases she listed, she said she took cities where she knew African Americans lived in, and searched on Google for “officer involved killing in (city name).” She also corroborated those numbers with cases she knew of in other cities.

Eisen agreed she included outliers that do not necessarily fit the theory that there is a “war against black people.” But even without those outliers, Eisen said the study confirms the point that there is a systematic problem of law enforcement and “other extrajudicial killers” using excessive force that is justifiable by law: “For every case you would want to take out of there (as an outlier), I would say if I had the resources, or the police were required to report, I could replace that case with three or four more,” she said.

Eisen acknowledged the report’s figures are not accurate. She said the real figure may be even higher — more like every 24 hours, a black person is killed by a police, security guard or a vigilante.

“I don’t think the burden should be on me to prove that it’s an accurate list. I’m saying it’s not accurate. It’s a way undercount. If you want a full count, you should demand it from the Department of Justice,” she said.

Yet this alarmist statement continues to be perpetuated on social media and in protests, and it is inaccurate, especially when distilled to a hashtag. Other variations of the statement may be more reflective of the report’s findings, but the report itself does not tell the full picture, either. Perhaps Eisen is correct that her numbers reflect an undercount, but she has little evidence to back that up; it’s just a hunch at this point. Protesters would do better to cite the FBI statistic, which is powerful enough by itself.

Remember: Just because it’s on the Internet doesn’t mean it’s true. And think before you retweet.

Update, Dec. 26: The Fact Checker is always willing to update our columns with additional responses from the subject of the fact check. Arlene Eisen provided this following response to this column:

I welcome the opportunity that The Washington Post has given its readers to consider the report that generated the hashtag #every28hours: “Operation Ghetto Storm: 2012 Annual Report on the Extrajudicial Killings of 313 Black People by Police, Security Guards and Vigilantes.”

Unfortunately, The Fact Checker concluded that “protesters would do better to cite the FBI statistic…” This conclusion demonstrates that The Fact Checker misses the message and significance of the report.  Most of the column makes the same case that others, including this author, have made.

“Every28hours” as a hashtag, like most hashtags, lends itself to oversimplification and misrepresentation. The focus on this straw man attempts to shift the narrative and ignore the significance of the movement against police terror. It fails to help readers understand either the report or the context and dynamics of policing black communities.

Those of us who respect and take seriously the movement that was triggered by the killing of Michael Brown in Ferguson understand that whether people repeat “every 24, 28, 54 or 84 hours” is not the point. Any of these numbers carry the meaning that police killing of black people is systemic, routinized and without legal consequence. The hashtag went viral because it challenges the assumption that these killings are isolated or the result of the personal prejudice of a handful of rogue cops. Those dubious assumptions support a package of myths that policing in the U.S. is “race-blind”, dedicated to protecting all communities equally.

(The double standard when comparing The Washington Post’s treatment of extrajudicial killings inside the US and inside Venezuela is glaring. A recent editorial cited the heavily disputed number of 41 dead—admitting that not even all were killed by the government—to justify imposing sanctions on officials of the Venezuelan government.) [Editor’s Note: The editorial page is entirely separate from the news side of the newsroom–Glenn Kessler]

In addition to beating a straw man, The Fact Checker asserts the methodology of the report “is curious”, without demonstrating that the entire report has been read. For example, The Fact Checker writes that I based my estimation that the number was far worse than 313 “on a hunch.” But on page 12 there is a detailed explanation of why I am confident of an estimation of as many as 400 extrajudicial killings of black people or one every 22 hours.

More importantly, the total number of people killed is a subtitle. It is not an analysis. The analysis is based on 100 pages of data that include as many details as could be documented about each deadly encounter. The methodology for analyzing this data is detailed in pages 10-29 of the report. For example, on page 27, I state 25 cases in this 2012 report or eight percent involve situations where the “suspect” shot at, wounded and/or killed a police officer and/or others while the police were on the scene. Although it may have been preferable to stop them with non-lethal force, the use of lethal force in these circumstances cannot be considered excessive. In an additional 13 cases (four percent), the facts surrounding the killing are unclear or sparsely reported. These are coded TBD in the “excessive force” column. But in the remaining 275 (88 percent) cases, killings were extrajudicial, that is, they used lethal force with no legitimate justification and violated peoples’ basic human rights.”

If 88 percent of the killings (or even several fewer allowing for categorization disputes) cannot be justified by international human rights standards, then any Statistics 101 class would allow the student to conclude that the data support the thesis implied in the report’s title. “Operation Ghetto Storm” is a title that initially appeared on t-shirts at a police training camp. It adapts the code name of the first U.S. invasion of Iraq. It sums up the report’s theme that the purpose, policies, high tech military hardware and mind-set that sustain the military occupation of black communities inside the US resemble those used to invade Iraq and sustain the occupation there.  To prevent future extrajudicial killings of black people by those paid or sanctioned by the national security state, it is important to know that these killings are a result of a perpetual war on black people.

The Fact Checker ignored another section of the report that reinforces this conclusion. It is titled “Impunity in the Judicial System for Extrajudicial Killers”. This impunity has ignited recent outrage at the exoneration of the killers of Michael Brown and Eric Garner. Even before 2014, the exoneration of the vigilante George Zimmerman who killed Trayvon Martin and countless police and security guards dating back decades has left a simmering outrage in black communities. The chart, which begins on page 130 of the report, details how as of November 4, 2014, the U.S. legal system determined that 91 percent of the killings were “justified”.  Of the scant 10 police who were charged, only two shooters were convicted of manslaughter.

Nor have the executive or legislative branches of government done much to limit the impunity police enjoy. On the contrary, they have supplied police with enough military hardware to wage several wars at a time, passed legislation that strips citizens of the basic rights that protect against all forms of police tyranny, given various agencies carte blanche to monitor citizens’ every move and utterance, justified racist profiling and provided infinite funds to maintain a system of mass incarceration. If you think the label of “national security state” for our government and its armed agencies is hyperbole, please do more study.