“Look, in Kansas, for example, we put our photo ID law in place in 2012. So, if you want to test the effect on participation, you look at the 2010 election and the 2014, which we did. In the rest of the country, participation dropped severely between 2010 and 2014. In our neighboring states, it dropped severely. But in Kansas, it stayed flat, which suggested that Kansas was doing better over that period with the voter participation. . . . We have found no evidence that there was a disproportionate effect on minorities. Again, the effect was positive.”
— Kansas Secretary of State Kris Kobach (R), interview on CNN, May 12, 2017. Kobach is vice chairman of President Trump’s voter fraud commission.

Do laws requiring identification at the polls help or hurt voter turnout?

Baldwin, who is running for reelection, posted on her campaign Twitter account that about 200,000 votes were suppressed in Wisconsin during the 2016 presidential election. This is a common talking point among Democrats, often used in the context of Hillary Clinton’s loss to Trump in Wisconsin by about 20,000 votes.

Kobach, who is leading President Trump’s voter fraud commission, said the law had a negligible or potentially positive effect in his state of Kansas, where the voter-identification law also includes a requirement for proof of citizenship.

First, here’s an important caveat: Many factors — including even weather on Election Day — affect turnout. It’s difficult to isolate specific reasons for increased or decreased turnout. So readers should be skeptical of politicians who attribute one specific factor to turnout, and dig into the underlying studies that prove or disprove the claim.

Critics of voter ID laws say it creates barriers that prevent or discourage people from voting — especially those who already are marginalized and less likely to vote. That includes minority communities, those with language barriers, poor communities and people who live farther away from polling places.

Baldwin’s claim is based on a study by a left-leaning group, Priorities USA. Election experts have widely criticized the report, but 0ther Democrats, including Rep. Keith Ellison (D-Minn.), have made claims based on the report.

The study looks at turnout in Wisconsin and Minnesota, which does not have a voter ID law. It finds that Wisconsin had lower turnout among nonwhite communities, while Minnesota did not. The study concludes that “if turnout had increased by the national no-change average, over 200,000 more voters would have voted in Wisconsin in 2016.”

But correlation isn’t always causation, and the study does not offer evidence of causation.

One of the main criticisms of this study is that it attributes all 200,000 votes to Wisconsin’s voter ID law. Yet it’s not that simple. While the law likely had some impact on deterring potential voters, there are other things that may have affected the lower turnout.

For example, many voters in Wisconsin decided to sit out this election. There was a lack of enthusiasm among voters for Clinton or Trump, and some may have believed Trump didn’t have a chance at winning Wisconsin, PolitiFact Wisconsin wrote. PolitiFact Wisconsin also pointed out that 2016 turnout in the state was higher than in 2008, before the voter ID law.

Rick Hasen, an elections expert at the University of California at Irvine, noted that black voters in Milwaukee, which experienced a dramatic decline in turnout in 2016, were not motivated by Clinton the same way they were for Obama in 2012 or 2008. Moreover, there was a general decline in the black vote in 2016, compared with 2012 or 2008, in both states that had voter ID laws and states that didn’t.

Baldwin’s staff says the findings in the Priorities USA report are consistent with the findings of a 2014 Government Accountability Office report that analyzed various data sets to find out the impact of voter ID laws in Kansas and Tennessee in 2012. The report found that a decline of 1.9 to 2.2 percentage points in Kansas and a decline of 2.2 to 3.2 percentage points in Tennessee that were attributable to changes in voter requirements.

Yet the GAO report has a different methodology, and the same percentage decline (2 to 3 percent) in the report would have been equivalent to between 61,000 to 94,000 votes in the 2016 Wisconsin election.

Scott Spector, spokesman for Baldwin’s campaign, said: “From the 90-year-old woman in Eau Claire that can’t obtain a Wisconsin photo ID due to a typo on her birth certificate to a woman in Milwaukee who lost her driver’s license right before Election Day and wasn’t able to cast a ballot, examples of law-abiding Wisconsinites no longer allowed to participate in their civic duty due to the new restrictive photo ID requirements for voting abound. No matter the number, any eligible Wisconsin voters unable to participate in our democratic process due to the new law is too many.”

[Update: A September 2017 study by University of Wisconsin-Madison researcher Kenneth Mayer found 11.2 percent of eligible nonvoting registrants — or 16,801 people — were deterred from voting in the 2016 election due to the state’s voter-identification law. About six percent of nonvoters — could be up to 9.4 percent, or 14,101 people, based on the confidence level — were prevented from voting because they lacked identification, or cited the identification requirement as the main reason they didn’t vote, the study found. Hasen wrote this was a careful study that “seems much sounder" than the earlier Priorities study.]

It’s difficult to isolate the impact of a specific law on voters’ behavior, yet Baldwin definitively said that Wisconsin’s voter ID law reduced turnout by approximately 200,000 votes. This claim goes too far.

The study that Baldwin cited looks at turnout in Wisconsin compared with Minnesota, which does not have a voter ID law. It finds that Wisconsin had lower turnout among nonwhite communities while Minnesota did not — then concludes votes were suppressed, without exploring any other factors that may have affected turnout. By the time of Baldwin’s tweet, there were several criticisms of this report and talking point. It should have been a warning sign to her campaign staff before she tweeted it as a definitive fact with no caveats.

According to Kobach’s office, out of the votes cast in 2014, 570 (.06 percent) were provisional ballots issued because lack of sufficient photo ID at the polling place. Among the 570, about half (267) provided sufficient photo ID before the county canvass and were able to make their votes count, his office said.

The research found that there was no statistically significant change among youth and minority populations in Kansas, while there was a decline nationally among those groups in neighboring states. So the report’s findings were more nuanced than Kobach’s claim that “the effect was positive.”

Again, it’s difficult to isolate the voter ID law as a single factor that made a difference in the turnout in 2014. Midterm years aren’t always the best gauge for voter behaviors because there normally is lower turnout, compared with presidential election years.

Kansas elections in 2014 were uniquely competitive and led to intense, effective get-out-the-vote efforts, according to elections experts in the state. Gov. Sam Brownback (R) narrowly won reelection after a hard-fought campaign — the first competitive gubernatorial race since 2006. The Senate race was one of the most competitive in the country, and elections experts expected turnout to be high in the 2014 election.

“I think that his comparison is not really appropriate, or even a fair comparison, because he’s not counting for the difference in what those elections [in 2010 and 2014] looked like,” said Patrick Miller, University of Kansas elections and political behavior expert.

This shows that even if voter ID laws have a negative impact, other factors can counteract the effect of such laws. Certain communities may be discouraged from voting, but grass-roots mobilization efforts may target other communities that turn out in droves and end up increasing turnout rates for the whole precinct, city, county or state.

The 2014 GAO report found that in 2012, compared with 2008, there was a decline in participation in Kansas in certain registered voting groups — voters 18 to 23 years old, those registered less than one year, and black voters. The GAO controlled for other factors that may have affected such turnout, especially compared with turnout in states similar to Kansas, and found changes in voter ID requirements may have led to the decline.

Kobach criticized the methodology in the GAO report and said 2008 and 2012 are not comparable because there was no statewide election in 2012 that mobilized get-out-the-vote efforts. But several elections experts said turnout in presidential years are not usually tied to down-ballot candidates.

Kobach’s claim lacks context. He claims that the voter ID law in his state either didn’t have much effect or had a slightly positive effect, because there was a net gain in votes in 2014 compared with 2010. But 2014 was a unique year for Kansas elections, and intense grass-roots organization led to increased turnout for a midterm year. And midterm elections aren’t the best gauge for turnout behavior. Washington Post Rating:
Two Pinocchios
“Look, in Kansas, for example, we put our photo ID law in place in 2012. … We have found no evidence that there was a disproportionate effect on minorities. Again, the effect was positive.”
Kris Kobach (R)
Kansas Secretary of State 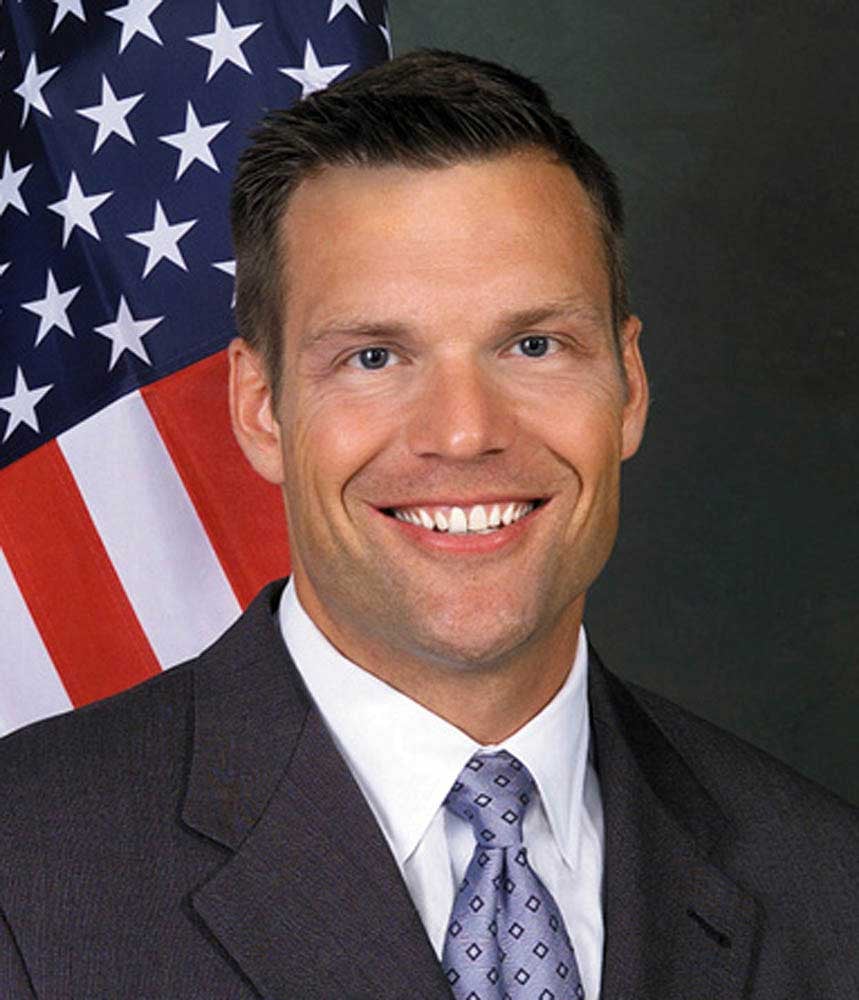 Noted: Reps. Greene, Jordan among GOP lawmakers to get boost on Twitter during Musk era