“He is loved in Arizona. I thought he was treated unbelievably unfairly when they came down with their big decision to go get him right before the election voting started, as you know. And he lost in a fairly close election. He would’ve won the election, but they just hammered him just before the election. I thought that was a very, very unfair thing to do.”
— President Trump, news conference, Aug. 28, 2017

“Thank you @realdonaldtrump for seeing my conviction for what it is: a political witch hunt by holdovers in the Obama justice department!”
— Former sheriff Joe Arpaio of Arizona, post on Twitter, Aug. 25, 2017

In a move that drew criticism from both Democrats and Republicans, President Trump pardoned Joe Arpaio of his criminal contempt of court conviction. The embattled former Arizona sheriff, who is a longtime political ally of Trump, thanked the president and claimed that his conviction was a “political witch hunt by holdovers in the Obama Justice Department.”

Trump similarly described Arpaio’s investigation as a political one that jeopardized his reelection chances. Let’s look at the facts.

The conviction that Trump pardoned stems from a 2007 racial profiling case, Melendres v. Arpaio, that ran parallel for some time to the civil rights probe. Here’s a timeline of that case, and Arpaio’s campaigns in 2012 and 2016.

2007: Melendres dates to a traffic stop in 2007, and grew into a class-action lawsuit by Hispanic plaintiffs who alleged that sheriff’s deputies discriminated against Latinos in traffic stops.

2011: U.S. District Judge G. Murray Snow ordered the agency to stop detaining people solely because they were suspected of being undocumented, and ordered sweeping changes to the office’s policies.

Snow was appointed by Bush and is known as a “straight-shooter,” ideologically a “very conservative Republican” who “quoted Scalia favorably.”

2012: Arpaio faced his first serious challenger in his bid for a sixth consecutive term as sheriff. Arpaio far outraised Democrat Paul Penzone, but 80 percent of funds raised for Arpaio’s campaign came from out-of-state donors — a sign of the waning local support for Arpaio. Penzone lost to Arpaio by six percentage points.

2013: Snow found that the sheriff’s office engaged in systemic racial profiling of Latinos in its anti-illegal-immigration efforts. But Arpaio and his deputies resisted Snow’s 2011 order, and Arpaio acknowledged as much in interviews with the media. For example, in April 2012, Arpaio told “PBS NewsHour”: “I’m still going to do what I’m doing. I’m still going to arrest illegal aliens coming into this country.”

2015: The Justice Department joined in the Melendres case to get the sheriff’s office to adopt court-ordered changes. Later that year, Snow found Arpaio in civil contempt of court. Arpaio argued that his violation was unintentional, and that the order was unclear.

August 2016: In an extraordinary move, Snow referred Arpaio and top aides to the Department of Justice for criminal prosecution for a slew of contemptuous acts, including failing to produce materials and violating the court order. Snow also found that Arpaio and his chief deputy had committed perjury.

In September, a survey by the Arizona Republic/Morrison/Cronkite News found that the majority of Maricopa County registered voters viewed Arpaio unfavorably.

October 2016: The DOJ’s Public Integrity Section, which investigates corruption charges against public officials, announced that it would charge Arpaio with criminal contempt of court. U.S. District Judge Susan Bolton took up the case. Bolton was so well regarded by both parties for her fairness that then-Sen. Jon Kyl (R-Ariz.), one of the country’s most conservative senators, recommended her for nomination by President Bill Clinton.

Although the DOJ was not on any timeline to take up the case, it made its announcement on the eve of early voting. Arpaio and his attorneys question the timing of this. Still, had the DOJ declined to pursue it, Bolton could have assigned it to a private attorney, per Snow’s request. As Snow noted in his referral, the case was still under the judicial branch’s purview.

The charge may have swayed some voters, but polling throughout the summer showed the sheriff’s race was a toss-up. And by October 2016, a potential criminal contempt charge had loomed over Arpaio since early 2015 as a worst-case scenario, the Arizona Republic reported: “The threat of criminal prosecution became increasingly inevitable after a prolonged series of hearings” in 2015.

July 2017: Bolton found Arpaio guilty of criminal contempt after a bench trial. While Arpaio requested a jury trial, the Justice Department opposed it, and maintained that position even under Trump and the new Attorney General Jeff Sessions.

Arpaio’s attorney, Jack Wilenchik, said Arpaio was referring to the DOJ’s political appointees and the Public Integrity Section, “which announced that it would be bringing charges two weeks before his reelection (and while the former president was still in office), directly and materially contributing to Mr. Arpaio’s loss. Those are the prosecutors who brought the case.” He added: “It’s important to recognize that every prosecution is in some sense a political decision.”

Political appointees can set priorities for prosecution, but this argument by Arpaio and Trump does not comport with the historical context or the facts of the conviction. (The White House did not provide a response.)

Moreover, Raymond Hulser, who in 2015 became chief of the Public Integrity Section, is a nonpolitical career civil servant who has worked in the unit since 1990. The Criminal Division has nearly 700 lawyers and only about six of those lawyer positions are political appointments, per a DOJ official. The remaining 690-plus lawyers serve in the career ranks.

This column in the right-leaning Federalist offers a comprehensive account of the role that politics played over the past decade. But it’s clear that the conviction was not tied to the ideologies of Obama’s political appointees at DOJ. Instead, the decisions to convict Arpaio of civil and criminal contempt came from the judiciary — two U.S. District Court judges. Moreover, the threat of a criminal contempt charge loomed long before October 2016, as Arpaio was found in civil contempt early 2015.

“These were not Department of Justice charges. This was the court’s request that its order be vindicated with a trial. Whether it was the Department of Justice who was going to, at the judiciary’s invitation, prosecute this case or a lawyer here in Phoenix, a prosecution was going to take place,” said Paul Charlton, former U.S. attorney in Arizona under the Bush administration.

Moreover, there is criticism of the DOJ that it did not prosecute Arpaio as aggressively as it could have, Charlton said: “Judge Murray Snow’s order indicated that the court believed that Arpaio had perjured himself and obstructed justice. The single misdemeanor count prosecuted by the Obama DOJ was an exercise in restraint, and others would say far too timid given the facts.”

Arpaio’s conviction stems from a lawsuit filed by individuals who were racially discriminated against by the policing practices under his watch. A Bush-appointed federal judge ordered the agency to stop this, but Arpaio resisted and flouted the order. That judge found Arpaio guilty of civil contempt of court, and referred his case for criminal conviction. Another federal judge, known among Democrats and Republicans for her fairness, issued his criminal conviction.

The DOJ’s announcement on the eve of early voting may have swayed some voters from Arpaio. But local support for the six-term sheriff began declining long before that, and voters knew since early 2015 that Arpaio may face a criminal contempt charge. Despite Trump’s claim, there was no clear path to victory for Arpaio before the DOJ charge.

Trump and Arpaio continue to make false claims about his conviction. But there are no presidential pardons for Pinocchios.

Washington Post Rating:
Four Pinocchios
Joe Arpaio "is loved in Arizona. … He lost in a fairly close election. He would’ve won the election, but they just hammered him just before the election. I thought that was a very, very unfair thing to do."
Donald Trump
President of the United States

Washington Post Rating:
Four Pinocchios
“Thank you @realdonaldtrump for seeing my conviction for what it is: a political witch hunt by holdovers in the Obama justice department!”
Joe Arpaio
Former sheriff in Arizona 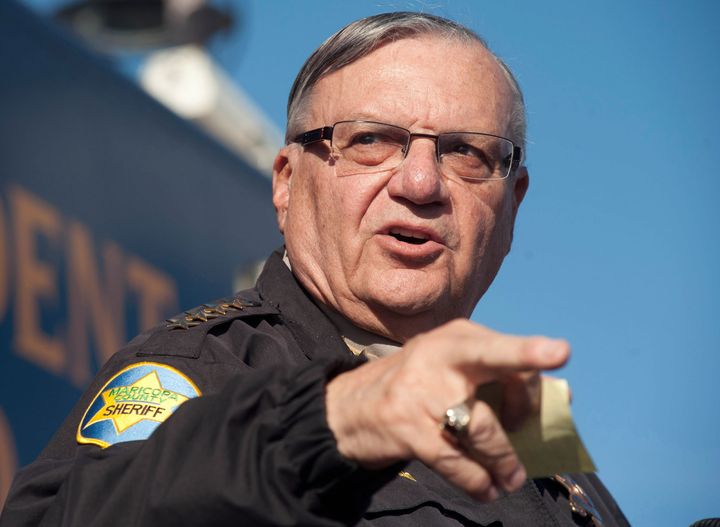