“Kavanaugh, who could be presiding over a case should the Pres be indicted, thinks that the Pres can’t stand trial. Trump has nominated a get-out-of-jail free card.”
— Rep. Carolyn B. Maloney (D-N.Y.), on Twitter, July 9, 2018

“The fact that #ScotusPick Kavanuaugh (sic) believes that a President cannot be indicted is an automatic disqualification from Supreme Court consideration. Plain and simple.”
— Alexandria Ocasio-Cortez (N.Y.), Democratic nominee for the House, on Twitter, July 9, 2018

As we’ve reported, this is a gray area of the law. Two opinions from the Department of Justice’s Office of Legal Counsel say the president is immune from being indicted while in office. But the Supreme Court has never ruled on this directly, and only the justices can settle this constitutional debate for good.

Because a presidential indictment is one of several possible outcomes of special counsel Robert S. Mueller III’s investigation, it’s natural to ask how Kavanaugh might vote on this question if confirmed.

Kavanaugh, a judge on the U.S. Court of Appeals for the District of Columbia Circuit and a former staff secretary to President George W. Bush, has left a long paper trail to sift for clues. An article he published in the Minnesota Law Review in 2009 makes several sweeping recommendations regarding the presidency and Congress. Some Democrats argue that Kavanaugh showed his hand in this article: he thinks the president can’t be indicted.

While it’s possible that Kavanaugh does hold this belief, the 2009 article doesn’t go so far as to say that. Let’s take a look.

Kavanaugh helped investigate President Bill Clinton as part of independent counsel Kenneth W. Starr’s team in the 1990s. Looking back, Kavanaugh wrote in his 2009 article, “the nation certainly would have been better off if President Clinton could have focused on Osama bin Laden without being distracted by the Paula Jones sexual harassment case and its criminal investigation offshoots.”

His argument was that the president these days has many weighty responsibilities — wars, economic crises, the threat of terrorist attacks — and shouldn’t be encumbered by criminal investigations or charges, or civil lawsuits, while in office.

“I believe that the President should be excused from some of the burdens of ordinary citizenship while serving in office,” Kavanaugh wrote in 2009, three years after Bush appointed him to the D.C. Circuit. “This is not something I necessarily thought in the 1980s or 1990s. Like many Americans at that time, I believed that the President should be required to shoulder the same obligations that we all carry. But in retrospect, that seems a mistake.”

In his 12 years on the bench, Kavanaugh has written nearly 300 opinions, often supporting presidential power and urging restraint of government bureaucracy, as The Washington Post’s Michael Kranish and Ann E. Marimow reported.

“He is a staunch defender of executive prerogative,” Stephen Vladeck, professor of constitutional law at the University of Texas School of Law, previously told The Post. “The question is just how far he would go in cases really testing whether there is any limit to that theory.”

Kavanaugh makes other recommendations in the 2009 article, arguing that the president should have more authority over some independent agencies; that “the Senate should consider a rule ensuring that every judicial nominee receives a vote by the Senate within 180 days of being nominated by the President”; that the president should defer to Congress on some issues involving war, and that it’s worth considering a switch to a single, six-year term for presidents instead of a four-year term with the possibility of reelection.

But the top recommendation is for Congress to pass legislation that defers civil lawsuits and criminal charges and investigations until after the president leaves office. Kavanaugh wrote that this would require an extension of the statute of limitations, to ensure the president can face any pending legal proceedings after leaving office.

If the president did something “dastardly” during his term, there’s always impeachment, Kavanaugh added.

Kavanaugh’s position in this article is different from saying the president can’t be indicted under existing law. If he thinks the law already bars an indictment of the sitting president, as some Democrats claim he does, why would he call on Congress to pass a law that shields the president from criminal charges?

A representative for Maloney pointed out a footnote in Kavanaugh’s article, which says, “Even in the absence of congressionally conferred immunity, a serious constitutional question exists regarding whether a President can be criminally indicted and tried while in office.”

That’s a mainstream view. As we noted, the Justice Department Office of Legal Counsel has written two memos (in 1973 and 2000) saying the president can’t be indicted — but the Supreme Court has never ruled on this question, so it’s up in the air.

In an earlier article published in the Georgetown Law Journal in 1998, Kavanaugh wrote, “The Constitution itself seems to dictate, in addition, that congressional investigation must take place in lieu of criminal investigation when the President is the subject of investigation, and that criminal prosecution can occur only after the President has left office.” In the same article, Kavanaugh wrote later on, “Whether the Constitution allows indictment of a sitting President is debatable.” (Emphasis his.)

In 1997, the Supreme Court ruled in Clinton v. Jones that a sitting president could be sued for his conduct while he was not in office. Clinton as president could not claim immunity from a lawsuit alleging he committed sexual harassment while he was governor of Arkansas, the court ruled. Kavanaugh wrote in his 2009 article that “the Supreme Court may well have been entirely correct.” He argued that government lawyers investigating Clinton, and judges ruling on those cases, had followed the law throughout. The problem, Kavanaugh wrote, was “the law as it existed.”

“I worked for Judge Starr and believe he performed his difficult legal assignment diligently and properly under a badly flawed statutory regime,” Kavanaugh wrote in a footnote.

Here are the key passages from his 2009 article:

“With that in mind, it would be appropriate for Congress to enact a statute providing that any personal civil suits against presidents, like certain members of the military, be deferred while the President is in office. The result the Supreme Court reached in Clinton v. Jones — that presidents are not constitutionally entitled to deferral of civil suits — may well have been entirely correct; that is beyond the scope of this inquiry. But the Court in Jones stated that Congress is free to provide a temporary deferral of civil suits while the President is in office. Congress may be wise to do so, just as it has done for certain members of the military. Deferral would allow the President to focus on the vital duties he was elected to perform.
“Congress should consider doing the same, moreover, with respect to criminal investigations and prosecutions of the President. In particular, Congress might consider a law exempting a President — while in office — from criminal prosecution and investigation, including from questioning by criminal prosecutors or defense counsel. Criminal investigations targeted at or revolving around a President are inevitably politicized by both their supporters and critics. As I have written before, ‘no Attorney General or special counsel will have the necessary credibility to avoid the inevitable charges that he is politically motivated — whether in favor of the President or against him, depending on the individual leading the investigation and its results.’ The indictment and trial of a sitting President, moreover, would cripple the federal government, rendering it unable to function with credibility in either the international or domestic arenas. Such an outcome would ill serve the public interest, especially in times of financial or national security crisis.”

Notice this is couched in terms of things Congress “should” do. Noah Feldman, a Harvard Law School professor, wrote that Kavanaugh might be saying “the president can be investigated and maybe even indicted unless Congress passes a law saying he can’t.” (Emphasis ours.)

Some Democrats acknowledge this aspect of Kavanaugh’s writings, and say it shows he’s predisposed to protect Trump from Mueller. “Kavanaugh has written extensively on his beliefs that a sitting president shouldn’t be subject to criminal investigations or civil lawsuits — this all but assures he would work to shield Trump from any litigation or criminal proceeding related to the special counsel’s investigation,” Sen. Cory Booker (D-N.J.) tweeted.

Senate Minority Leader Charles E. Schumer (D-N.Y.) said at a news conference Tuesday that Trump “chose the candidate who he thought would best protect him from the Mueller investigation.”

“He’s even argued that sitting presidents shouldn’t face criminal investigation — no investigation of a president,” Schumer said. “Is it any wonder that President Trump chose Kavanaugh from the list of 25 [candidates] when we know he’s obsessed with this investigation?”

In Nixon v. Fitzgerald, a 1982 decision, the Supreme Court ruled that the president had immunity from civil lawsuits arising from his official actions. This doesn’t apply in criminal proceedings or investigations, or in cases involving conduct before or after a president’s term of office.

Messages left for Fallon and Ocasio-Cortez were not returned. The White House declined to comment.

A judge who says the law should bar the indictment of a sitting president easily might rule in line with that belief. Kavanaugh supports a strong executive branch, and he’s held different views at different times on whether the sitting president should be made to face legal proceedings. When it was a Democrat in the White House, he thought it was fair game. After working for a Republican president, it was out of bounds. This is all important to keep in mind.

But Kavanaugh’s articles from 1998 and 2009 are no smoking-gun evidence that he would vote to dismiss an indictment against Trump, should one ever be filed. Although he clearly believes it’s a bad idea to indict a sitting president, Kavanaugh never states his view whether the Constitution allows it. In fact, he says Congress should pass legislation to ensure the president is immune from civil and criminal proceedings while in office. As Feldman writes, Kavanaugh’s 2009 article can be read as a signal that he might uphold a presidential indictment unless Congress changes the law.

We don’t mean to split hairs by analyzing whether Kavanaugh believes something “can’t” or “shouldn’t” happen, but in the legal arena, this distinction matters. Kavanaugh’s stated views on this question don’t go as far as Fallon, Maloney and Ocasio-Cortez claimed. Their tweets merit Two Pinocchios, although we considered giving Three. To say Kavanaugh is Trump’s “get-out-of-jail free card” is an extreme distortion of what he’s written.

Update (1:45 p.m.): Fallon pointed out that Kavanaugh, during a Georgetown Law School panel in February 1998, raised his hand when the moderator asked, “How many of you believe, as a matter of law, that a sitting president cannot be indicted during the term of office?” (Politico dug up the video of this panel after we published this fact-check.)

This is relevant to how he might rule on the Supreme Court. However, Kavanaugh wrote several months after this panel, in an article published July 1998, that it was “debatable” whether the Constitution allows an indictment of the sitting president. In 2009, he wrote that he had revised his earlier views on subjecting the president to court proceedings. It’s still premature to say he would toss out an indictment of the president based on this mixed record, but Fallon is correct to note that the picture is more complex than what we first described. This shifts our ruling closer to Two Pinocchios rather than Three.

Washington Post Rating:
Two Pinocchios
“Kavanaugh, who could be presiding over a case should the Pres be indicted, thinks that the Pres can’t stand trial. Trump has nominated a get-out-of-jail free card.”
Carolyn B. Maloney
Member of Congress (D-N.Y.)
https://twitter.com/RepMaloney/status/1016492630946013190 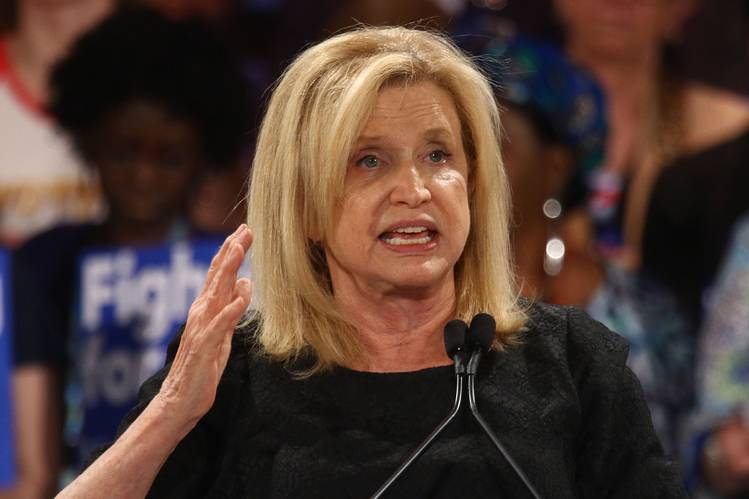