Runner falls just short of the finish. Four others pick him up and carry him. I’m literally in tears pic.twitter.com/vb9cjxG6pQ — Wesley Lowery (@WesleyLowery) April 21, 2014

It was a sadly common sight on Boylston Street during Monday’s Boston Marathon.

The runner, a Massachusetts man, was struggling. He could barely stand, his legs and arms shaking.

But he had pushed his body this far — nearly 26 miles — and surely he could make another few blocks to the celestial blue and yellow banners that mark the finish line.

The elite runners had long finished by this point, and thousands of charity runners lie in his rear. This man represents the middle of the pack, the runners who qualify. They know they’ll never win the race, but still they run for the love of the sport. For the love of the competition. As he passed The Forum restaurant — the site where one of two bombs went off around this time of the day, just before 3 p.m., during last year’s marathon — the man’s legs gave out.

Not far behind him was Dave Meyer, 57, of Grayslake, Ill.

Meyer was having a terrible race, running well under his normal pace. He was exhausted, he was disappointed. But, most of all, he wanted to finish the race.

“I made the turn onto Boylston Street, I looked up and saw the finish line and I thought: Thank the Lord. I was just focused on getting there and getting some water,” Meyer said.

As he got to the race’s final leg, Meyer noticed a man in front of him struggling to stay on his feet, his legs vibrating rapidly, nearly about to give out.

“I was approaching about mile 26. I could see the other runner in front of me, his legs were wobbly. He looked like he was about to go down…” Meyer recalled. “At that point, my time didn’t make any difference to me… I knew how important it was that I finish. So I knew it was important that he finish.”

Meyer caught up to the injured runner, and lifted him, wrapping the runner’s left arm around his shoulder.

Together, Meyer thought, they would both make it to the finish.

“I thought: I’m going down with him…” Meyer recalls.

And then Jim Grove arrived.

As he neared the 26-mile marker, Grove looked up and saw the man struggling in front of him – not an uncommon sight during Monday’s marathon in which a harsh sun beat down on the tens of thousands of runners participating. At this point in the race, the course was dotted with runners seated and lying on the sidelines.

“I see this guy really struggling, and then the guy behind him kinds of grabs him, so I start closing in on them,” Grove said. “[Meyer] was having a real hard time holding this guy up. But he wasn’t going to give up. He wasn’t going to let this other guy hit the ground. So, I grabbed his other arm and we got him up around our shoulders and we started moving toward the finish line.” 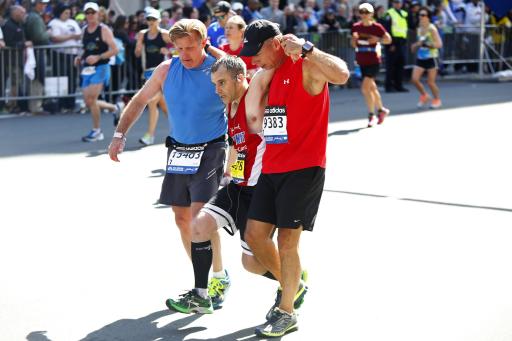 The runner is assisted by Jim Grove (L) and David Meyer down Boylston Street during the 118th running of the Boston Marathon in Boston, Massachusetts April 21, 2014. REUTERS/Dominick Reuter

The three men moved silently, the pain echoing from the tense expressions on their faces. But the injured runner couldn’t do it. His legs had completely given out.

“I started to think we might not make it, but then…”

But his legs just couldn’t do it. The group struggled a few feet. Another man stopped to help, and a woman pic.twitter.com/nM8FGP9Vgx

Seconds later, two more saviors appeared. First it was Mike Johnson, a 47-year-old marathon veteran from Stillwater, Minn. Johnson was running in his 20th marathon, but only his second Boston Marathon.

The first was last year, when he was stopped with just half a mile to go after the bombs went off. This year, he was determined to finish. As he approached the finish line, Johnson ran up to the left sidewalk, giving high-fives to as many people as he could. He had made it. He was going to finish.

“I was caught up in emotion,” Johnson said. But then he saw three men struggling. He had to help them.

Not far behind him was Kathy Goodwin, an accountant from Seattle, who began to pass the group on the left.

She stopped, turned around, and asked how she could help. Like the rest, Goodwin was having a miserable race. She felt sick, her time was unimpressive.  It was the hardest she’d ever run. So she could only imagine how hard it was on this man. Determined, she decided she would not finish unless this guy did too.

As the team of four buoyed the runner’s body up away from the pavement, the thousands packed onto these blocks of Boylston — just feet from where bombs had ignited at almost this exact point in the race a year before — erupted in a triumphant cheer.

“This year, everyone was going to finish the race,” Goodwin said.

As the runner was carried toward the finish, now just a few blocks away, the man cried out to his new teammates. “Let me walk it. Let me walk across the finish. I need to finish,” he urged those who carried his limp body. The five were now just a few hundred feet from the finish line. As they crowd roared, they set him down.

“We made a decision,” Meyer recalled. “Let’s put him down. Let’s let him walk across on his own.”

Then, individually, they each finished the race.

Momentarily united by their act of teamwork, the five soon departed. None of the four has spoken to the injured runner– who was immediately attended to by a marathon medic — or each other, since finishing the race. In a brief phone conversation Tuesday, the injured runner, who asked not to be named for privacy reasons, said he was doing well following some medical attention. The others departed to find loved ones and guzzle down water.

Stunned, and exhausted, Johnson stumbled toward the medical tents. “I totally lost it. I was bawling. I just kept my head down,” Johnson said. “When I looked up, everyone was gone.”

In the day since, the five runners have become an international symbol of what this year’s marathon stood for. Last year, images of heroic runners carrying wounded bombing victims signaled the heroism and resilience. This year, it will be the image of these four strangers banding together, to carry one of their own, that will symbolize the message of the 118th marathon.

Everyone finishes the race.

Read Monday’s story: Runner can’t make it to the Boston Marathon finish line, so others carry him to the end