The Daily Trail: 'The mood is somewhere between grim resignation and the Donner party'

We're still in Cleveland. If you're not, but you'd still like to see the official roll call nominating Donald Trump, and hear from Ben Carson, Chris Christie and the rest of the Republication convention's Tuesday night speakers, you can catch the action live here, at this link. Scroll down for tonight's full lineup — which tonight includes Trumps a bit more accustomed to the trail spotlight.

You can catch all The Washington Post's live team coverage of the second day of the convention here, here and here.

In the modern era, a major party political convention exists in service of one goal only: messaging. Who the candidate is. What the party represents.

So far this week, the Republican Party is definitely sending a message on both fronts, report Robert Costa, Dan Balz and Philip Rucker — it just isn't the one listed in the program:

When the opening night of the Republican National Convention ended here Monday, Donald Trump’s advisers were exuberant — thrilled with Melania Trump’s sparkling debut and confident that Rudy Giuliani and a parade of other speakers delivered the ideal combination of fire, emotion and reassurance.

One hour later, they were in crisis mode.

The potential first lady’s address — the night’s highlight — was suddenly under attack because of apparent plagiarism. By morning, the campaign’s efforts at damage control added up to a series of conflicting explanations and calls for firings. The episode reopened long-standing divisions among Trump’s advisers and allies who have been feuding all year.

Added to that were questions for Trump’s team about the choreography of opening night.

Why had they not ended the night with Melania Trump’s powerful speech?

Who had vetted the long and rambling speech by retired Lt. Gen. Michael Flynn, which prompted so many delegates to walk out that the closing act by Sen. Joni Ernst of Iowa — a rare next-generation star willing to address Trump’s convention — came close to midnight in a mostly empty Quicken Loans Arena?

Why had Donald Trump called into Bill O’Reilly’s program on Fox News, resulting in the network cutting away from the emotionally resonant remarks by Patricia Smith, whose son Sean was killed in the 2012 attacks in Benghazi, Libya?

Then there were the day’s earlier developments: the brief revolt on the convention floor from rebellious anti-Trump delegates over a procedural dispute, as well as Trump campaign chairman Paul Manafort’s decision to begin a week-long push for party unity by publicly chastising Ohio Gov. John Kasich and the Bush family over their refusal to support Trump.

The first 24 hours of Trump’s convention left Republican strategists — some of whom have long been at odds with Trump and his team — befuddled and concerned about the capacity of the Trump campaign to run a serious and effective general-election operation against the machinery of Hillary Clinton’s campaign. ...

At this rate the locusts will arrive in Cleveland tomorrow at noon!

“Talking to operatives here, the mood is something between grim resignation and the Donner party,” said Mike Murphy, a veteran GOP consultant who ran the super PAC behind the unsuccessful candidacy of former Florida governor Jeb Bush.

John Weaver, a GOP strategist who has feuded with Manafort, wrote in an email: “This was probably the worst first day of a national party convention since the Democrats gathered in Miami Beach in 1972. You would think it can only get better, but with this campaign, one never knows.” 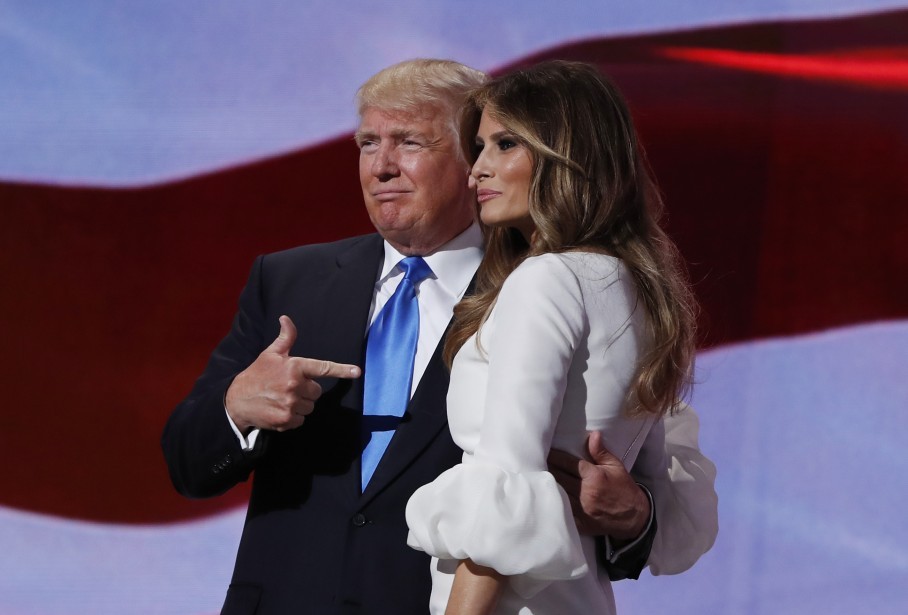 There's a new message coming tonight (more on that below) — but, as Chris Cillizza notes, the Trump team spent a good part of the day addressing the fallout from last night:

Donald Trump prides himself on flying by the seat of his pants. By doing things — in life and in politics — that freak out the squares. By being different and, in his mind, better.

That unpredictability has served him remarkably well in the presidential campaign to date; it kept his opponents in the Republican primary off balance and appealed to voters who wanted something, anything, different from politics as usual.

But unpredictability and rejecting all norms of "how things are done" have a darker side, too. And that darker side was exposed late Monday night when it became clear that portions of Melania Trump's speech to the Republican National Convention had been lifted from Michelle Obama's Democratic convention address eight years earlier.

The Trump campaign is spinning this as (a) nothing more than a few borrowed words and phrases (Chris Christie said that 93 percent of the speech was Melania's own) and (b) a secret plot by Hillary Clinton's campaign to discredit another powerful woman. This from Trump campaign manager Paul Manafort:

Ask yourself this: If it came out that I had plagiarized two or three paragraphs in a much longer story, would you be cool with that? Do you think my bosses would be?

What all of the excuses being offered by the Trump campaign are meant to cover up is the fact that someone, somewhere, needed to go through Melania Trump's speech with a fine-toothed comb before she delivered it. Then they needed to go through it again. And again. Hell, run each phrase through Google and see what pops up. This isn't that hard. The Internet exists. Use it.

Given that, how could something like his happen? Because Trump has set the example from the top: Say stuff and figure it out. And it has worked, which only affirms the idea that he can say and do whatever and not suffer any consequences. That he doesn't need the size staff that other campaigns have traditionally carried because he can do it better and simpler.

The problem with that is, well, what happened on Monday night. The candidate's spouse, delivering one of the three or four most important speeches of the entire convention, got caught lifting lines. This is a GIANT embarrassment for Trump and one that you can be sure he will be livid about — and be looking for a fall guy.

But the real blame lies with Trump. This is the campaign he wanted, the campaign he prided himself on running. Zigging when everyone else zags works — until it doesn't. Unpredictability isn't a strategy. Trump learned that the hard way Monday night. 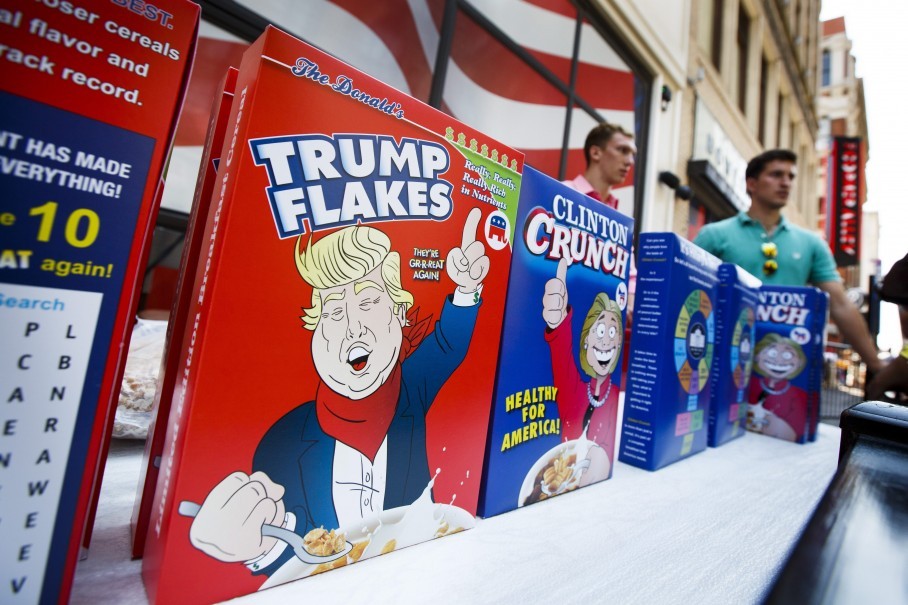 For sale at the convention. EPA/JUSTIN LANE

The postscript, via Callum Borchers: The journalist widely credited as the first to document the apparent plagiarism, Jarrett Hill, wasn't at Quicken Loans Arena in Cleveland and wasn't even assigned to cover the convention at all. He was 2,000 miles away at a coffee shop in Los Angeles.

...What's clear is that whoever wrote/copy-pasted Trump's speech figured the journalists covering the convention wouldn't notice. That turned out to be true. But the aide responsible for the speech didn't account for the out-of-work reporter in an L.A. Starbucks.

His business card says "Saving Cleveland one song at a time." A Cleveland #campaignfashionreport pic.twitter.com/JSUfkXKYO1

After the roll call, the message the Trump team will (try to) deliver tonight is "Making America Work Again." This does not mean that they think America is lazy. Far from it! The theme is the economy, and how Donald Trump's policies would encourage job creation.

Scheduled for the 8 pm ET hour:

Andy Wist
President of a waterproofing company in the Bronx

an unlikely hero emerges amidst the chaos pic.twitter.com/ZX43YQtwSV

Scheduled for the 9 pm ET hour:

I'm at big protest in Public Square. Both anti-Trump and pro-Trump. Fight just started. Cops broke it up. #RNCinCLE pic.twitter.com/XIYhpFUsOV

Scheduled for the 10 pm ET hour:

YOUR DAILY TRAIL PIT STOP: If you're in Cleveland, it's at Butcher and the Brewer, where you can catch The Fix's Politics and Pints trivia road show, featuring our very own Chris Cillizza, in just a few minutes. Hurry! 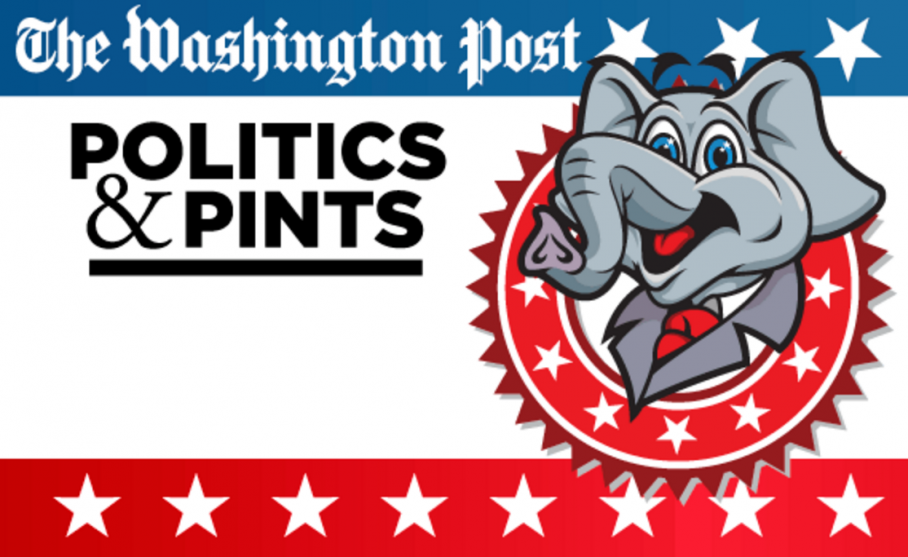 Note: Due to an error in the official convention schedule, this report originally said former congressman Chris Cox would be addressing the convention. It was the NRA lobbyist of the same name.