The greater a country’s income inequality, the likelier parents are to push their kids to work hard
By Matthias Doepke and Fabrizio Zilibotti
Add to list
On my list 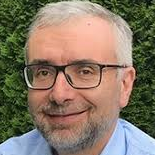