The Energy 202: The United States is running out of nuclear options

When planning began on two new nuclear reactors at Plant Vogtle in eastern Georgia a decade ago, Southern Company's Georgia Power thought the project would be one of several to come online in a wave of new nuclear power plants opening in the United States.

But as of this week, the two still-to-be-built reactors in Georgia are alone among new nuclear projects under construction in the United States.

On Monday, a pair of utilities, private SCANA and state-owned Santee Cooper, canceled construction on a pair of nuclear reactors in South Carolina after years of mounting building costs, stagnant electricity demand and competition from natural gas and renewables.

Many of the same economic forces that factored in the South Carolina decision weigh on the prospects of the Vogtle plant and its two planned nuclear reactors.

In March, Westinghouse, a once storied nuclear-energy business and lead contractor on both the South Carolina and Georgia reactors, went bankrupt.

In the years leading up to that filing, Westinghouse, along with nuclear energy boosters, touted its new AP1000 model reactor as the safer, cheaper and faster-to-build technology that would bring a “nuclear renaissance" to the United States, which has completed only one nuclear reactor since the 1980s.

Instead, the reverse happened. Since 2013, five nuclear power plants have retired soon after gains in a hydraulic-fracturing technology made natural gas cheap and abundant in the United States.

“In any industry, if it’s not growing it’s dying,” Rich Powell, executive director of the ClearPath Foundation, said. “If we can’t keep some construction going, our already pretty challenged nuclear renaissance will become fully challenged.”

After Westinghouse’s bankruptcy, Southern's nuclear-energy unit took over construction of the new reactors. With a larger market capitalization than SCANA, Southern appears willing to take on more risk in building the project.

Stan Wise, a commissioner on the Georgia Public Service Commission overseeing the Vogtle project, noted that the number of co-owners in the Vogtle project — Oglethorpe Power Corp., Municipal Electric Authority of Georgia and Dalton Utilities in addition to Southern — as well as the large electricity market in Georgia diffuse the financial risk of building the reactors.

“The dissimilarities of these projects should be recognized before making any suppositions on whether construction will continue at Plant Vogtle based on decisions made in South Carolina,” Wise said in a statement.

But the cost of the project in Georgia, like that in South Carolina, has swelled.

Back in 2009, Southern, which owns about a 46 percent stake in the project, estimated that the new Vogtle reactors would cost the company a total of $4.4 billion. Before Westinghouse’s bankruptcy, that estimated cost grew to $5.7 billion if both reactors were completed by 2020. If the completion date is pushed back another three years, to 2023, that figure could grow to $7.4 billion, according to a preliminary estimate this week from Southern.

State regulators, in consultation with the reactors' co-owners, will make a final decision about the future of the project later this year. Southern has indicated it wants to go forward.

Part of the reason nuclear reactors have become so expensive to build in the United States is that the nation has constructed so few recently. “We’ve allowed our nuclear construction ability to atrophy,” Powell said.

The Energy Department has stepped in to try to kick-start nuclear-energy construction. The new Vogtle reactors, for example, have the backing of the department, which lent funding to the project through its loan guarantee program.

Energy Secretary Rick Perry has spoken glowingly of nuclear energy as a part of the Trump administration’s official “all-of-the-above” energy strategy. But President Trump himself spends significantly more time talking about coal, while the White House’s proposed budget, if passed, would drastically reduce funding for the department's nuclear-energy office and eliminate the loan program altogether.

The future of nuclear energy likely lies with companies pursuing new technologies, such as small modular reactors. Unlike the Vogtle plant and its other larger cousins, modular reactors — like those being developed by a company called NuScale in rural Idaho with Energy Department support — are designed to avoid cost overruns by being built in factories.

Programming note: With Congress no longer in session, The Energy 202 will publish three times next week. It will not publish on Monday, Aug. 7 and on Friday, Aug. 11, but we’ll be in your inbox on Tuesday, Wednesday and Thursday. -- Preliminary probe: The Interior Department’s Office of the Inspector General has launched a “preliminary investigation” into reports that Secretary Ryan Zinke called Alaska’s senators to threaten them over their votes on the Republican health-care effort, The Hill reported.

Leading up to the final health-care vote last week, Zinke called Sen. Lisa Murkowski (R-Alaska), reportedly to warn the senator that there would be repercussions for her state if she voted against the bill backed by the White House.

“The OIG is undertaking a preliminary investigation into this matter,” Deputy Inspector General Mary Kendall wrote in a letter to House Democrats, according to the report.

“We will advise you about what further action the results of this inquiry lead the OIG to take.”

-- Meanwhile, Zinke tried to turn the page by posting a photo of him and Murkowski  over Alaskan-brand beer:

"We'll take away your resources"

"Have a local craft beer"

I guess beer summits are making a comeback https://t.co/U7P0a4ckhW

-- One of the very few things Congress got done in August before leaving for recess is give the Trump administration its deputy energy secretary. The Senate voted 78-to-17 to confirm Dan Brouillette to be the No. 2 person at the Energy Department. Brouillette worked at the department under George W. Bush.

The Senate also confirmed, by unanimous consent, two of Trump’s nominees to the Federal Energy Regulatory Commission. Installing the two, Neil Chatterjee and Robert Powelson, was necessary to give FERC a full quorum and allow it to make progress toward a top Trump energy priority: approving more oil and gas pipelines.

More nominee news: The Senate Energy and Natural Resources Committee approved nominees for the Interior and Energy departments after a vote was postponed last week. The committee approved Dough Domenech to be assistant Interior secretary of insular affairs; Mark Wesley Menezes to be undersecretary at the Energy Department; Paul Dabbar to be undersecretary for science at Energy; Brenda Burman for the Bureau of Reclamation at Interior; and Susan Combs to be assistant secretary of policy management and budget at Interior.

ENR is set to consider three more energy-related nominees following the recess. On Sept. 7, the committee will hold a hearing on Joseph Balash to be the assistant secretary of Interior for land and minerals management; and Richard Glick and Kevin McIntyre to FERC, The Hill reported. President Trump listening as West Virginia Gov. Jim Justice speaks at a campaign-style rally in Huntington, W.Va., where the governor announced that he is changing parties from Democrat to Republican. (AP Photo/Susan Walsh)

-- Kerfuffle in coal country: West Virginia Gov. Jim Justice, a former coal businessman, announced he is leaving the Democratic Party and becoming a Republican, declaring the switch at President Trump’s Thursday night rally in the state.

Justice said the Democrats “walked away from me,” The Post's Abby Phillip reported. “West Virginia, I can't help you anymore by being a Democratic governor.”

During his remarks, he told the crowd he had met with Trump twice in the last two weeks, adding he spoke with the president about coal and manufacturing jobs. Phillip writes: “Justice made headlines by refusing to endorse Clinton during the 2016 election. But he won the election for governor as a Democrat despite Clinton's massive loss to Trump. Trump campaigned promising to bring back coal mines to states such as West Virginia.”

Trump reiterated his commitment to the coal industry during his speech.

“I love your grit, your spirit,” he said. “And I love our coal miners, and they are coming back strong. The change you voted for is happening every single day.”

Some more Justice reading: Here's a story from last year by The Post's Steven Mufson on then-gubernatorial candidate Justice, a coal-mining baron who "left a trail of millions of dollars of unpaid fines to federal coal regulators, unpaid bills to suppliers and unpaid taxes to state and local governments throughout Appalachia."

And here is The Post's Amber Phillips on how Justice’s about-face brings Democrats to a record-low number of governorships. 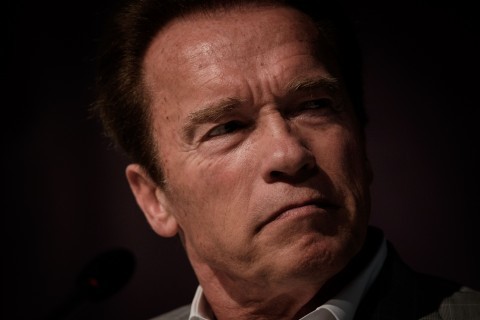 He said he'd be back...
Schwarzenegger flexes his muscles in an effort to counter Trump’s withdrawal from the Paris climate accord.
Politico 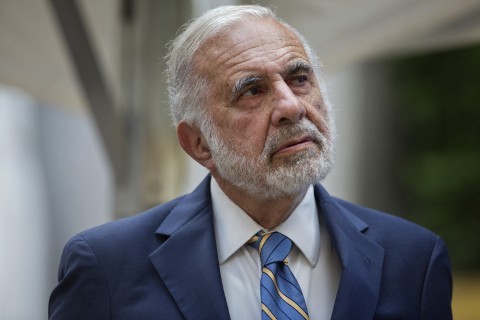 The Trump administration is not expected to enforce sanctions against Russia’s energy infrastructure, according to the report. But the Kremlin is concerned about whether Western partners needed to complete the pipelines will be deterred by the sanctions.

Reuters continues: “The European Union, fearing sanctions will hurt oil and gas projects on which it depends, said it was ready to retaliate unless it obtained U.S. guarantees that European firms would not be targeted.”

But it adds that five Western firms that invested in one of the pipelines warn it’s “too early to judge the impact of sanctions..” -- Man, it’s a hot one: Last month, Death Valley in California recorded the hottest ever month in the United States, clocking in at an average of 107.4 degrees Fahrenheit. It was also the second-hottest in the world, reports Capital Weather Gang’s Angela Fritz.

Another alarming data point, Fritz writes, were the overnight temperatures. On three nights in July, the “low” temperatures were 102 and 103 degrees. The low never got below 89 degrees.

-- "Every day we work, and every day it feels like it’s getting hotter": The effects of the warming climate can be seen in working-class communities across the Sun Belt, as the New York Times’ Yamiche Alcindor details in a long-read published Thursday.

The concerns are compounded, Alcindor writes: “Residents of working-class communities in the Sun Belt often cannot afford to move or evacuate during weather disasters. They may work outside, and they may struggle to cover their air-conditioning bills. Pollution in their communities leads to health problems that are compounded by the refusal of most Sun Belt state governments to expand Medicaid access under the Affordable Care Act.”

Robert D. Bullard, a professor at Texas Southern University, told The Times there’s been a disproportionate focus on animals over humans when discussing the impact of the changing climate.

“For too long, a lot of the climate change and global warming arguments have been looking at melting ice and polar bears and not at the human suffering side of it,” Bullard said. “They are still pushing out the polar bear as the icon for climate change. The icon should be a kid who is suffering from the negative impacts of climate change and increased air pollution, or a family where rising water is endangering their lives.”

The story also notes how President Trump’s agenda, specifically by pushing fossil fuels, could affect the communities by increasing pollutants.

“You can’t have freedom and justice in this country if you can’t breathe your air, if you can’t open your window because of the toxic smells,” Sen. Cory Booker (D-N.J.) told the newspaper.

-- And here's a good overview, from John Schwartz and Kitty Bennett at The Times, of how Trump tends to repeat inaccurate assertions he makes about energy and environmental policy.

Here’s how to stay safe in bear country:

What Trump’s golfing habits say about him:

Passengers see lightning from plane passing over a storm:

Stephen Colbert wants to be on Robert Mueller's grand jury: