Shortly after the United States elected President Trump, Bill Gates, the richest man in the world, organized a group of fellow billionaires to commit to funding clean energy technology.

With Trump promising to distance himself from policies to reduce atmosphere-warming emissions, the high-profile executives announced they had started a fund of more than $1 billion to go toward low-emissions energy.

But a new report finds that such sums from the private sector aren't sufficient to prevent dire climate warming — not by a long shot.

According to the analysis from the Precourt Institute for Energy at Stanford, to keep the planet under 2 degrees Celsius warmer compared to pre-industrial levels, the global economy needs to triple its annual investment in low-emissions technology — from $750 billion per year between 2010 and 2015 to $2.3 trillion per year going forward until 2040.

“The magnitude is just enormous,” said Jeffrey Brown, a lecturer at Stanford and co-writer of the paper.

Maintaining the planet's temperature under that threshold is an aim of the Paris climate accord, an international emissions-reduction agreement between nearly every nation in the world. Though brokered by the United States under President Obama, his successor has vowed to withdraw the country from the accord.

Although the cost of alternative energy technologies — in particular, solar panels — has plummeted in recent years, another crucial resource needed to deploy renewables — financial capital — has proven to be, unlike sunlight, exhaustible.

"This work is within the mainstream," said Mark Muro, a senior fellow at the Brookings Institution, who was not involved in the analysis. To decarbonize the world economy, Muro said, "on all kinds of measures there needs to be an astronomical increase" in investment.

In the first half of the decade, private institutional investors — which include pension, mutual and sovereign wealth funds alongside billionaires — invested a total of $3.4 trillion in the world economy per year, the analysis found. That means at current investment levels, two out of every three dollars invested per year would need to go toward clean energy to halt catastrophic warming — a tall order for which investors seem to have little appetite.

The arithmetic is not the only issue. Not every investable dollar is created equally. Pension and mutual funds, which together held more than half of all assets among institutional investors in 2015, tend to invest money conservatively because they, unlike high-net-worth individuals, aim to protect the retirement accounts of middle-class workers.

“It’s their view of their fiduciary duty,” said Chris Davis, senior director of the Ceres Investor Network on Climate Risk and Sustainability. “Their mission is not to save the world from climate change.”

There are, of course, exceptions among those risk-averse funds, such as the pension funds for public employees in Washington state and for teachers in California that have chosen to put their retirement portfolios toward low-emissions energy sources. “Unfortunately, it’s not happening so much in the red states,” Davis added.

The categories of "clean energy" technology requiring investment include not just wind, solar and nuclear power, but less high-profile work like making the electric grid and buildings more energy efficient.

Energy efficiency is "not as exciting -- it's not as covered in the media," said Dan Reicher of Stanford, one of the co-authors of the analysis. "People are a lot more intrigued by solar panels on the roof than by an efficient furnace in the basement."

Another issue is geography. Unsurprisingly, much of the investable money globally comes from developed countries that are already weaning themselves off coal, the most carbon-intensive fossil fuel.

Investing U.S. and European capital in foreign developing energy markets is not frictionless. For example, wild currency fluctuations relative to the U.S. dollar, such as changes in the rupee in India, make calculating the return on investment even more difficult for investors.

The Stanford researchers released their report over the weekend in the hopes that climate negotiators gathering in Bonn, Germany next month — facing a leadership vacuum after the United States announced its withdrawal from the Paris accord — consider addressing the international financing problem for clean energy projects.

"These dynamics should be front-and-center for ministers meeting soon in Bonn," Reicher said.

-- An unprecedented move: After hinting in speeches he would do just this, Scott Pruitt, the head of the Environmental Protection Agency, is poised to jettison scientists who have received EPA grants from from a key advisory group and replace them with industry experts and government officials from conservative states. The Post's Juliet Eilperin, Brady Dennis and Chris Mooney report: "A list of expected appointees to the EPA’s Science Advisory Board, obtained by The Washington Post from multiple individuals familiar with the appointments, include several categories of experts — voices from regulated industries, academics and environmental regulators from conservative states, and researchers who have a history of critiquing the science and economics underpinning tighter environmental regulations."

The heart of the matter: Critics say the move will bring more industry scientists with conflicts of interests regarding EPA regulations into the agency. But Pruitt has reversed the conflict-of-interest charge, saying the scientists who receive EPA grants should not be advising the agency.

Pruitt;s official announcement of the change is slated to happen at 2 p.m. today. -- Under investigation: The FBI’s office in San Juan, Puerto Rico is reportedly investigating the $300 million contract that the island government 'spower company signed with Whitefish Energy, a tiny Montana-based firm, per the Wall Street Journal. The report follows the cancellation of the controversial contract over the weekend.

-- "Betray:" U.S. oil refiners are ramping up rhetoric against the Trump administration's decision to maintain the renewable fuel mandate. In an ad airing on Fox News, according to Axios, a coalition including independent refiners like Valero Energy and PBF Energy accuse Trump of "caving to ethanol lobbyists." It continues: "Tell him not to betray the American workers who elected him." The oil refiners are agitating after the Trump administration told corn-state senators it will maintain Obama-era RFS volumes. (Read my reporting on this contentious issue here).

-- Oil exports up: Crude oil demand from the United States is up for the second year in a row since lawmakers lifted a 40-year-old ban on oil exports, according to the U.S. Energy Information Administration. Per the Washington Examiner, oil exports rose by 300,000 barrels a day to a total average of 900,000 per day in the first half of 2017, compared with the same time last year. The United States reached a record 2 million barrels a day in late September — a rally despite Hurricane Harvey sweeping through the Gulf Coast earlier that month.

There's a trio of noteworthy climate-related research results out this week. Let's run them down: The giant boulders of Eleuthera, Bahamas, known as “The Cow and the Bull,” have sparked debate among scientists about their origin. (Charles Ommanney/The Washington Post)

-- And don't forget "The Cow and the Bull:” Two massive boulders on the Bahamian island of Eleuthera have become symbols of understanding the changing climate, writes The Post's Chris Mooney. There’s no obvious explanation for how the boulders got to their location atop a 50-foot-high cliff. One climate scientist suggested two years ago that superstorms put the boulders in place more than 100,000 years ago when there were higher seas and dangerous weather conditions, the type likely to return if polar ice sheets rapidly melt. But a recent study says that the boulders didn’t need superstorms to get to the high cliff, suggesting storms of today’s strength could have done the trick when seas were 20 or 30 feet higher, Mooney notes.

The bottom line: “The controversy over Eleuthera’s boulders underscores just how little we know about how the oceans will react to climate change,” Mooney writes. 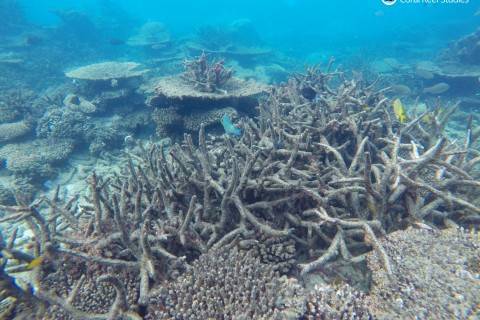 Loss of Federal Protections May Imperil Pacific Reefs, Scientists Warn
Fisheries officials call the marine national monuments unnecessary, and their boundaries are said to be under review by the Trump administration.
The New York Times
DAYBOOK

Is the White House haunted?

Watch volunteers rescue a deer with a Halloween pumpkin stuck on its head:

From The Daily Show with Trevor Noah: "It's Mueller Time:"