Scott Pruitt, administrator of the Environmental Protection Agency, will no longer allow scientists with EPA funding to serve on its scientific advisory boards. (Andrew Harrer/Bloomberg)

Want more news and analysis on President Trump's energy and environmental policy? Get it here.

It's official: After much speculation in recent days, Environmental Protection Agency chief Scott Pruitt announced on Tuesday he was upending the way the agency’s key advisory groups are staffed.

The news: Any researcher who receives EPA grant money is now barred from serving as an adviser on the Scientific Advisory Board, the Clean Air Science Advisory Committee and the Board of Scientific Counselors. The Post's Brady Dennis and Juliet Eilperin have the full story here.

Why it matters: The move would ban a large swath of researchers currently on the boards, and open more spots for scientists funded by alternative sources — including by regulated companies. Environmental and scientific groups were quick to condemn the changes, arguing that industry-friendly boards could lead to less rigorous environmental protection.

More: Pruitt, a deeply religious Christian, pulled a passage from the Book of Joshua to justify his decision. "Joshua says to the people of Israel: choose this day whom you are going to serve," Pruitt said, according to BuzzFeed News. "This is sort of like the Joshua principle — that as it relates to grants from this agency, you are going to have to choose either service on the committee to provide counsel to us in an independent fashion or chose the grant. But you can’t do both. That’s the fair and great thing to do."

Or as New York Times reporter Lisa Friedman put it:

In July, Niina Heikkinen of E&E News published a fascinating piece on how religion may inform Pruitt's deregulatory ideology. The takeaway is that the creation story in Genesis shows that God has given mankind dominion over Earth. In contrast, environmentalists, as one pastor in the piece put it, "have started worshiping God's creation, the planet and all the living organisms on it, instead of God." -- The Trump-Russia story gets an environmental angle: Among the many big revelations this week in special counsel Robert S. Mueller III's investigation into Russian interference in the 2016 election is that Sam Clovis, a former Trump campaign co-chairman, encouraged another Trump campaign adviser to foster ties with Russian officials.

The Clovis news is especially relevant because his nomination hearing to become the Agriculture Department’s chief scientist is tentatively scheduled in the Senate for Nov. 9.

Scientists and Democratic lawmakers, already inclined to vote against Clovis due to his "extremely skeptical” (Clovis's words) stance on climate change, used the Mueller news to further skewer the nominee.

“In every aspect, Clovis falls far short of the standards demanded by the position,” the Union of Concerned Scientists wrote to senators in a one-page letter with 3,100 signers.

One of the senators to whom that letter was addressed, Debbie Stabenow of Michigan, told USA Today the "emerging information about his role in the Trump campaign’s interactions with Russia raises serious concerns."

Sam Clovis is a climate denier, not a scientist. He’s nominated USDA Chief Scientist. Obviously ridiculous. He should withdraw.

The Post's Lisa Rein has more here on what one observer, lawyer Deepak Gupta, noted was the most 2017 story yet:

It doesn't get much more 2017 than this. And if it does, I don't want to know about it. https://t.co/oTIKNKurbF

-- FEMA washes its hands of Whitefish: Federal Emergency Management Agency head Brock Long told lawmakers Tuesday that he was not involved with the decision to award a $300 million contract to Whitefish Energy to restore the power grid in Puerto Rico. Speaking at a hearing before the Senate Homeland Security and Governmental Affairs Committee, Long said, “No lawyer inside FEMA would ever have agreed to some of the language in that contract,” according to the Associated Press, and added that there was “a lot wrong” with the contract. Long said FEMA learned about the deal only after it was signed. He also called for additional support from Congress to rebuild the power grid stronger than it was before the storm, the AP reported.

The latest on disaster recovery nationwide: 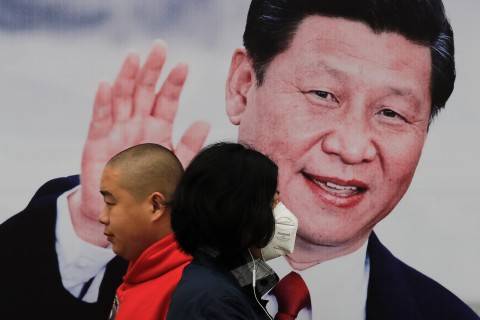 China says it still wants U.S. cooperation on climate change
A Chinese official said Tuesday that his country still wants to cooperate with the U.S. on climate change and hopes an upcoming meeting on the issue in Germany will produce a draft agreement on implementing the Paris climate accord.
Associated Press
OIL CHECK A polar bear sow and two cubs are seen on the Beaufort Sea coast in the Arctic National Wildlife Refuge. (U.S. Fish and Wildlife Service)

-- The GOP's plan to offset $1 billion in tax cuts by allowing oil drilling in the Arctic National Wildlife Refuge may not be realistic, Jennifer Dlouhy and Alex Nussbaum of Bloomberg News report. Adam Kolton, executive director of the Alaska Wilderness League, called the plan “pure fantasy.” “Data from previous Arctic oil lease sales suggest the U.S. is likely to collect less than a fifth of that billion-dollar goal over the next decade -- about $145.5 million -- from auctioning off territory in the sprawling northeast Alaska refuge where caribou calve and polar bears roam,” Dlouhy and Nussbaum write. “Oil companies may be scared away by the controversies and costs of drilling in that remote and fragile terrain. Even if they aren’t, crude prices would have to be some $15 more per barrel than they are today to make the effort pay off at all.”

Why does that number matter? Congress has sole authority to approve drilling in the Arctic refuge, but Republicans have never had the 60 votes needed to overcome a Democratic filibuster. So the Alaska congressional delegation, interested in opening ANWR, has turned to incorporating ANWR authorization into the budget package at various points since the 1980s. That maneuver requires only 50 votes, but in the process Congressional Republicans are counting on a $1 billion windfall from Arctic drilling that, according to Bloomberg News, will likely never come.

From Nicolas Gonzalez, a spokesman for the National Audubon Society in New York:

I'm not a mathematician or economist but I do know the Senate's proposed $1 billion is a different figure than the more likely $37.5 million pic.twitter.com/PuDCFn2O7B A solar installer from Baker Electric installs a solar panel on the roof of a residential home in San Diego. (REUTERS/Mike Blake/File Photo)

-- Solar tariff decision lands on Trump's desk: On Tuesday, the U.S. International Trade Commission voted to send a report to President Trump next month recommending that the United States impose tariffs and other import restrictions that would protect domestic solar companies from the influx of cheap solar panels from other countries. But The Post's Chris Mooney reports that the “proposed remedies were not consistent among the commissioners and did not go as far as the two companies" — Suniva and SolarWorld — "that brought the action before the board had requested — leaving few parties happy with the outcome along with lingering uncertainty over the ultimate end point of the process, which will be determined by President Trump.” Meanwhile, most of the nation’s solar industry has warned that a move to raise the price of imported panels could threaten U.S. solar jobs.

In the middle sits Trump, who seems to be interested in taking some trade-related jab at China, a big solar panel producer and one of the president's favorite punchbags on the campaign trail. Trump has the discretion to agree to or reject the federal trade panel's recommendations — or just write his own. -- "Whatever happens in the White House:" The head of the United Nations' environment program thinks the United States will meet standards set by the Paris climate accord despite President Trump’s lack of support for staying in the deal. UNEP Executive Director Erik Solheim said Tuesday that “all the big American companies are dedicated to go in the green direction” which will ultimately drive the country’s progress “whatever happens in the White House,” he added, per the Associated Press.

Solheim's comments come as UN officials warned that overall, countries are not doing enough to limit greenhouse gas emissions. The “Emissions Gap” report released Tuesday noted that pledges within the Paris deal are “only a third of what is needed to avoid worst impacts of climate change."

“We still find ourselves in a situation where we are not doing nearly enough to save hundreds of millions of people from a miserable future. This is unacceptable,” Solheim said. “If we invest in the right technologies, ensuring that the private sector is involved, we can still meet the promise we made to our children to protect their future. But we have to get on the case now.”

-- Before you throw away that leftover lasagna: The 27 million tons of food that Americans throw away every year costs the economy about $144 billion and contributes to greenhouse gas emissions from overflowing landfills, The Post's Caitlin Dewey reports. And a new report from the Natural Resources Defense Council found that leftovers make up the largest source of edible food waste in the country. -- The claim: On Tuesday, Lamar Smith, chairman of the House Science Committee, questioned the scientific validity of a recent report from the Government Accountability Office calculating the price tag of climate change for the federal government.

The GAO report relied heavily on two previous studies, including one published in 2014 by the Rhodium Group. "The heavy reliance on this study raises concerns considering that it is a non-peer reviewed document that has not received the same scrutiny as many other scientific documents used in similar reports," Smith wrote in a letter to GAO.

The facts: Dan Vergano‏ of BuzzFeed News asked the Rhodium Group study authors if their 2014 paper was peer-reviewed. It was. In fact, it was published as a research article in Science, the preeminent U.S. scientific journal.

It actually has a link that explains the peer review -- https://t.co/y7VDMnrTDp and everything. Took 7 months, two rounds of review.

Is Hillary Clinton president? In Trump world, it sounds like it: