A canoer paddles on one of the many waterways in Minnesota’s Boundary Waters Canoe Area Wilderness. The Obama administration denied renewing two mining leases near the area in January, on the grounds that any future mining operation could contaminate the region’s pristine watershed. (Dave Freeman)

The Trump administration has decided to shorten an environmental review aimed at determining how preventing mining on 230,000 acres of public land in Minnesota would affect a nearby region of pristine lakes that is popular with caneoers.

The move, detailed in documents obtained by myself and Juliet Eilperin for The Washington Post, could give the public a smaller voice in reviewing an Obama-era ruling blocking mining in a swath of forest near Minnesota's Boundary Waters Canoe Area Wilderness, a glacially carved region west of Lake Superior that is speckled with lakes.

It is another small example of the Trump administration easing the way for more mining across the country — not just for the rock Trump always talks about — coal — but for ores of copper, nickel and other metals as well.

Like with so many other Obama-era decisions, the Trump administration has gone to work unwinding the Minnesota mining one — in this case, quite slowly and only after intense lobbying. This week, the U.S. Forest Service will take another small step.

According to a draft of a press release obtained by The Washington Post, the Forest Service plans to announce that it will now conduct an abbreviated review of the Obama-era proposal to withdraw the area adjacent to the boundary waters from possible mining. The decision to convert the study launched in the final days of the Obama administration into a less-stringent environmental assessment could have major policy implications — basically giving bureaucrats less of a leash to build a case that forest near the protected area should be out of bounds to drilling.

Changing to a less stringent review, from what's called an "environmental impact statement" to an "environmental assessment," comes a month after the Interior Department moved to renew the expired mining leases held by a Chilean mining giant next to the wilderness area.

Connecting the dots: Shortly after entering office, Interior Secretary Ryan Zinke met with proponents of Twin Metals Minnesota, a subsidiary of the Chilean firm, that  belongs to the family of billionaire Andrónico Luksic, who rents a Washington, D.C., home to Ivanka Trump and her husband, Jared Kushner.

Here's where everyone stands on continuing mining near Boundary Waters:

While the Forest Service, a division of the Agriculture Department, is tasked with completing the environmental review, the final say on whether mining should be banned rests with Zinke.

For more on Minnesota's Boundary Waters: Read this excellent profile of the region's dueling mining and tourism economies by Reid Forgrave in The New York Times Magazine in October. Michael Dourson sits for his confirmation hearing in front of a Senate panel in October. (Rex Features via AP Images)

— Former controversial nominee "befuddled" by his fate:  Michael Dourson, who withdrew his name from consideration to lead the EPA’s Chemical Safety Office and was hired as a senior adviser to EPA head Scott Pruitt, described the fallout from his star-crossed nomination to the Cincinnati Enquirer. "I've always just followed where the science takes me,” he said. "So to lose out on this because of that belief in the science was disappointing…But people don't want to believe that perhaps newer science does come up with different results than 10 years ago and that those that do can't also be committed to defending public health."

— Clean Air Act measure, reversed: The EPA announced Thursday it was reversing a Clean Air Act provision that "requires a major source of pollution like a power plant to always be treated as a major source, even if it makes changes to reduce emissions," Reuters's Eric Beech reported. "Sources of air pollution previously classified as 'major sources' may be reclassified as 'area' sources when the facility limits its emissions below 'major source' thresholds, the EPA said." Environmentalists were furious at the decision, with the Sierra Club calling it an "appalling attack" and a "deadly new loophole."

— Tick-tock: The Doomsday Clock is now stopped at just two minutes to “midnight,” as the Bulletin of the Atomic Scientists pressed the minute hand of the symbolic clock forward 30 seconds. The organization called it a “grim assessment of the state of geopolitical affairs,” The Post’s Lindsey Bever, Sarah Kaplan and Abby Ohlheiser report.

Here’s Mashable’s Andrew Freedman’s assessment of the clock, which in some corners is derided as an atomic-age relic and alarmist gimmick: “More importantly, the use of a clock to convey complex concepts, such as the need to act now to prevent the worst consequences of global warming decades from now, is a bizarre and imperfect choice at best…. Perhaps the best way to reform the clock would be to get with the times, and represent global threats using, at the very least, a digital watch, but more appropriately, a blaring, beeping, vibrating emergency alert sent to everyone's phone at the same time, giving vague but disturbing information, thereby forcing us all to read the full statement.”

— Billions of pieces of plastic: A new study of more than 100,000 reef-building corals in the Asia-Pacific region found more than 11 billion plastic items are floating near the reefs, which increases the likelihood of disease from 4 percent to nearly 90 percent, The Post’s Darryl Fears reports. And researchers say that amount of plastic is expected to spike 40 percent by 2025. A couple watches a video on their phone as they and other Hurricane Harvey evacuees settle in for the night while sheltering at the Calvary Community Church on September 5, 2017 in Houston. (Ricky Carioti/The Washington Post)

— Harvey’s damage: The National Hurricane Center reported Hurricane Harvey may have been more extreme than any other deluge in U.S, history. “[I]t is unlikely the United States has ever seen such a sizable area of excessive tropical cyclone rainfall totals as it did from Harvey,” the report said, per The Washington Post’s Jason Samenow. Harvey was also the second costliest storm in history, with an estimated $125 billion in damage, per Bloomberg, second only to Hurricane Katrina in 2005.

— And in Puerto Rico: "Puerto Rico’s government unveiled a fiscal plan Thursday under which the commonwealth would only be able to support $2.5 billion to $14 billion of debt in the long term, a fraction of its current level," The Post's Steven Mufson reports. "The plan suggests that holders of its bonds might receive as little as a nickel on the dollar." 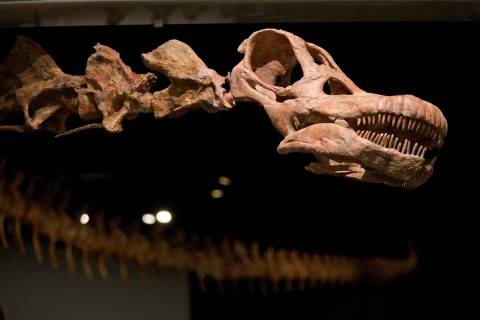 Scientists rebel over a Trump ally at the Natural History Museum
More than 200 scientists and other academics are asking the American Museum of Natural History to remove Rebekah Mercer from its board.
The New York Times
OIL CHECK A new Volkswagen Beetle Wave is seen on display at a press event at the 2015 New York International Auto Show. (EPA/JASON SZENES)

— Monkeying around: The New York Times details a fraudulent study conducted by Volkswagen that was meant to bolster its claim that its new diesel vehicles were cleaner than its old ones. For the experiment, “ten monkeys squatted in airtight chambers, watching cartoons for entertainment as they inhaled fumes from a diesel Volkswagen Beetle.” The problem? "[T]he Volkswagen used in the Albuquerque monkey tests had been set up to produce false data."

Shell is closing in on ExxonMobil's crown
Profit at Anglo-Dutch major set to surpass U.S. rival for first time this century
Bloomberg News 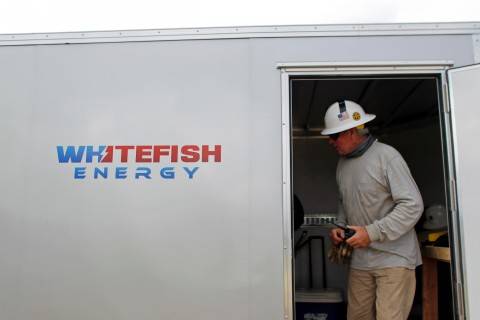 And here are some great longreads for your weekend:

— Within two years, turbines that generate electricity for thousands could be exported from a Canadian province to Massachusetts, providing long-awaited renewable energy to the state. But the indigenous people within the region have concerns about the environmental consequences of such a project. (The Boston Globe)

— The World Health Organization says more than 11 percent of deaths worldwide are linked to air pollution, and 92 percent of people around the world live in areas with dangerous pollution levels. HuffPost’s Killer Air series examines some of these stories. (HuffPost)

— David Gelles writes of self-made tycoon T. Boone Picken’s decision earlier this month to do the unthinkable, close down BP Capital and effectively announce his retirement. (The New York Times)

— Gabriel Stargardter writes of fuel theft, which is becoming one of the top economic and security concerns for Mexico as it saps more than $1 billion in revenue yearly, and how the involvement of drug cartels has pit the country’s biggest industries against one another. (Reuters)

Here's what was happening with the clouds that captivated meteorologists on Wednesday night via The Post's Angela Fritz: