The Energy 202: Trump nominates USGS head. It took him more than a year.

President Trump has nominated a former astronaut to head a science agency after more than a year in office — even as his administration has touted the agency as key to helping make the United States a dominant force in exporting fuel and minerals globally.

On Friday, the White House announced it would nominate James F. Reilly II to direct the U.S. Geological Survey, the science arm of the Interior Department that is responsible for overseeing about one-fifth of the nation’s landmass.

During the 13 years Reilly worked as an astronaut for NASA, he flew three spaceflight missions, conducted five spacewalks and logged more than 853 hours in space.

Although his nomination was long expected, it took Trump more than a year to formally advance Reilly’s name, which still has to be confirmed by the Senate. William Werkheiser, a 32-year veteran at the USGS, has been serving as its acting director.

The Trump administration has been especially slow when it comes to filling top-level science roles. President Barack Obama, for example, nominated his first USGS director, Marcia McNutt, in July 2009, or seven months into his tenure. She was in the job by October. And in 2000, President George W. Bush decided to retain his predecessor’s USGS director.

By July of last year, Trump had not nominated anyone to 85 percent of the top science jobs in his government, a move that may be intentional as his advisers have talked about "dismantling" government and Trump has expressed skepticism about climate change more generally.

Democrats and other critics from scientific and academic circles have accused Trump and his deputies of ignoring the advice of experts, resulting in such actions as pulling the United States out of the Paris climate accords despite ample evidence that human activity is warming the planet.

But the foot-dragging displayed by the White House in filling top science posts has done little to boost the Trump administration’s stated ambitions.

One of those priorities is expanding domestic mining — not just for coal, which Trump mentioned often on the campaign trail, but also for metals imported by the United States. For example, Interior Secretary Ryan Zinke, himself a former geologist, recently ordered the USGS, without Trump’s political pick in place, to identify new sources of copper, aluminum and other minerals in what the department called the “first ever national survey of critical minerals.”

“Other nations are far ahead of us with mapping of their mineral resources, leading to private sector investment overseas rather than right here at home,” Zinke said in a statement in December. “Drafting a complete topographical and geographic survey of the United States is exactly the kind of task the USGS was created to do.”

Historically, the USGS has played an essential role in assessing oil and gas reserves in the Arctic refuge, often known by its acronym ANWR. In 1998, the USGS estimated the refuge’s coastal plain contains a mean volume of 10.4 billion barrels of oil.

The real figure, however, could be much higher. New discoveries in other parts of Alaska’s North Slope have led some geologists to believe that ANWR may have more oil than originally estimated. The task of revising federal oil reserve estimates will fall, again, to the USGS.

And finally, just this month Interior issued a plan to expand offshore oil and gas drilling in the Gulf of Mexico and elsewhere. Zinke swiftly withdrew waters off the coasts of Florida from consideration at the request of Republican Gov. Rick Scott (R), however, inciting withering criticism not only from governors of other coastal states eager for their own exemptions, but from the oil and gas industry as well, with the American Petroleum Institute deriding the exclusion of Florida as “premature.”

Reilly probably understands that concern. Before flying high for NASA, Reilly searched for underwater oil and natural gas in the Gulf as the chief geologist for Enserch Exploration, a Dallas-based energy company.

—  Trump says ice caps are “setting records:” Talking about Arctic and Antarctic ice like it is the U.S. economy, President Trump claimed ice caps are experiencing record growth an interview with Piers Morgan aired Sunday night on the British network ITV. “The ice caps were going to melt, they were going to be gone by now, but now they’re setting records,” Trump said.

What's really happening, per Bloomberg News: "On ice caps specifically, NOAA, in its annual Arctic Report Card published in December, said the amount of the Arctic Ocean frozen over in the coldest points of winter set a record low in 2017 and is declining faster than at any time in the past 1,500 years."

Some other things Trump said:

From The Post’s Juliet Eilperin and Brady Dennis: “[Pruitt’s] decision, which falls short of blocking a proposed gold and copper mine in the region outright, represents a surprising twist in a years-long battle that has pitted a Canadian-owned mining company against commercial fishing operators, native Alaskans and conservationists determined to protect the world’s largest sockeye salmon fishery."

— “A threat to the country:” William Ruckelshaus, who served as the first ever EPA chief under President Richard Nixon and again under President Ronald Reagan, warned climate change denial under the Trump administration was dangerous. “If you don’t step up and take care of real problems, and don’t do anything about it, lives will be sacrificed,” he told HuffPost in an interview. “They certainly are killing everything."

— Irony alert: The U.S. Chemical Safety Board said late last week it will investigate the oil and gas drilling site explosion in Oklahoma that killed five, per Reuters. Trump has proposed to eliminate the budget for the chemical safety board all together.

—  Zinke’s Sunshine State burn: The Alaska congressional delegation — including Senate Natural Resources Committee Chairwoman Lisa Murkowski — asked the interior secretary to leave certain areas in the state out of his proposed plan to boost oil and gas drilling in federal waters, per the Anchorage Daily News.

Following the secretary’s surprise announcement he would exclude Florida from the offshore drilling plans before other Interior officials backpedaled, Murkowski said she expects Zinke to respond to requests from other coastal lawmakers. Only one area off Alaska's coast, near Bristol Bay, is currently off limits.

— Russian pipeline a potential problem, says Tillerson: Secretary of State Rex Tillerson said the administration is opposed to Russian plans for the Nord Stream 2, a natural gas pipeline to Germany. “We see it as undermining Europe's overall energy security and stability," per the Washington Examiner.

— From Russia with LNG: Meanwhile, a $27 billion project along the Russian Arctic coast exporting liquefied natural gas (LNG) abroad is subject to U.S. financial sanctions. So why is an LNG tanker full of Russian gas sitting in Boston Harbor? Because while Treasury Department sanctions prohibit U.S. investors from financing the project, they do not ban the purchase of natural gas from there, The Post's Steven Mufson reports.

And after the recent cold snap, New England is hungry for gas.

— Oil price spike gives the nation an edge: The recent oil boom has allowed the United States to “challenge the dominance of Saudi Arabia and dampen price pressures at the pump,” the New York Times reports. “The success has come in the face of efforts by Saudi Arabia and its oil allies to undercut the shale drilling spree in the United States. Those strategies backfired and ultimately ended up benefiting the oil industry.” — Monkeying around: Volkswagen has apologized following a New York Times report it conducted a fraudulent study to make it seem its diesel vehicles were cleaner than past models. “We apologize for the misconduct and the lack of judgment of individuals,” the company said a statement, per Bloomberg. “We’re convinced the scientific methods chosen then were wrong. It would have been better to do without such a study in the first place.” And the New York Times reported over the weekend on the company’s struggle to contain the harsh criticism following its report.

— Congressional GOP pushes back on a gas tax hike ahead of Trump's State of the Union: "I'm not for raising the gas tax," said Senate Majority Whip John Cornyn (Tex.), per CNBC. "It's going to be a declining source of revenue." Cornyn has David and Charles Koch on his side, too.

— Fact check: Trump says solar tariffs will create "a lot of jobs." But according to an analysis by The Post's Salvador Rizzo, part of our fact-checking team, it could wipe out many more as solar developments cancel projects due to the rise in cost to panels. 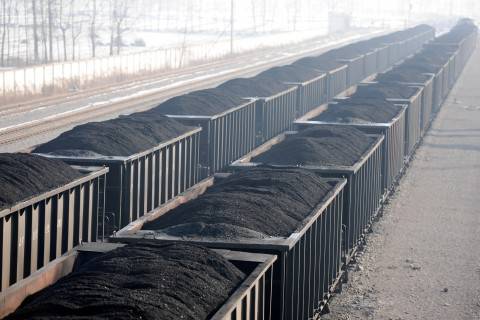 The U.S. may back a Vietnam coal plant. Russia is already helping.
A state-run company in Vietnam is seeking support from the Export-Import Bank for a project that could benefit American business but is criticized by environmentalists.
The New York Times
DAYBOOK

POST PROGRAMMING ALERT: The Washington Post is hosting an event on the eve of President Trump’s first State of the Union Address, featuring House Minority Leader Nancy Pelosi (D-Calif.), Kellyanne Conway, counselor to the president, and several other lawmakers and political analysts. The program begins at 2:30 p.m. Sign up to get a notification when the event stream begins, which will be live here.

— A bear necessity: The Post's Karin Bruilliard writes about how fish skins helped treat bears who were badly burned in California wildfires: