The Energy 202: This is how pipeline companies will seek a pass on Trump tariffs

Many businesses that so far have been big boosters of President Trump's agenda are scrambling to figure out how to avoid the crushing new tariffs he announced last week.

In the wake of the announcement, a lobbying race is on for industries aiming to carve out exemptions to the 10 percent tariff on imported aluminum and 25 percent tariff on imported steel. Oil and natural gas pipeline companies are surprisingly optimistic about being excluded from the protectionist measures, despite the Trump insisting that unless pipeline steel “comes from the United States … we're not building one.”

“We certainly believe it should qualify for an exemption,” said John Stoody, vice president of government and public relations for the Association of Oil Pipe Lines.

The tariff tussle is a latest test of the degree to which Trump — and those around him in the administration — will let his protectionist tendencies get in the way of his administration’s effort to maximize domestic fossil-fuel production.

Trump’s tariff order potentially offers the energy industry some wiggle room. It directs Commerce Secretary Wilbur Ross, in consultation with the State, Treasury and Defense departments, to “provide relief” for companies that need “any steel article determined not to be produced in the United States in a sufficient and reasonably available amount or of a satisfactory quality.” President Trump speaks before signing the Section 232 Proclamations on Steel and Aluminum Imports during a ceremony in the Roosevelt Room at the White House last week. (Jabin Botsford/The Washington Post)

That provision, toward the bottom of Trump's order, is where oil and gas pipeline companies see their solution. The production of high-grade pipeline steel strong enough to withstand pressures is a niche market making up just 3 percent of the total U.S. steel market, pipeline-laying companies say, one that stateside steelmakers have exited as foreign competition became more intense.

“Part of the problem is that U.S. domestic steel producers have largely exited this market,” said Donald Santa, head of the Interstate Natural Gas Association of America. Santa and other pipeline-laying industry representatives said U.S. steelmakers have steadily turned to selling to more reliable buyers, like automakers.

According to a report prepared by the consulting firm ICF last May for oil and gas lobbying groups, 53 percent of steel pipeline in 2015 and 2016 was manufactured abroad with foreign steel. Of the remaining 47 percent that was fabricated in the United States, about half was still composed of imported steel.

One of Trump’s first actions as president in January 2017 was to clear the way for the controversial Keystone XL and Dakota Access pipelines that the Obama administration scuttled. Hours later, however, Trump ordered Ross to draft a policy requiring the nation’s pipelines to be constructed or reinforced with U.S.-made materials “to the maximum extent possible and to the extent permitted by law.”

But the turn of bureaucratic gears wore down that resolve. By March, the White House said Keystone would be exempt from the “buy American” requirement because the project was already underway. The Commerce Department was given 180 days to complete its proposal, but that deadline came and went without it seeing the light of day.

The issue the Commerce Department must resolve over the ensuing months is whether market conditions for pipeline steel meet the “sufficient and reasonably available” threshold set by Trump. The department will issue procedures for requesting product exclusions within the next two weeks.

“Anyone who opines with certainty on exclusions is on shaky grounds,” said Joshua Zive, senior principal at the law and lobbying firm Bracewell. “The process is not only numerical, it’s political.”

For the oil and gas industry more generally, there is an even bigger trade issue on the horizon. The Trump administration is contemplating ending the North American Free Trade Agreement, to the chagrin of U.S.-based oil and gas multinationals with operations in Canada and Mexico. With NAFTA negotiations ongoing, U.S. neighbors to the north and south are exempted from the steel and aluminum tariffs — for now.

But as we have all seen, anything could happen in Washington these days.

— More tariff fallout: Sen. Lisa Murkowski (R-Alaska), chair of the Senate Energy and Natural Resources Committee, warned Trump’s steel tariffs could bump the cost of exporting natural gas in her state. “The back of the envelope numbers with these tariffs, we might be in a situation where it might be as much as half a billion dollars added on the most expensive infrastructure projects that we have seen with this country,” Murkowski said at the CERAweek conference on Friday, per the Washington Examiner.

— The Forest Service’s sexual harassment problem: The U.S. Forest Service moved quickly to name an interim leader following the resignation of the agency’s former chief over sexual misconduct allegations. The Associated Press reports wildland firefighter Vicki Christiansen was appointed to lead the service as lawmakers call for efforts to combat misconduct within the agency and elsewhere in the executive branch. Christiansen has worked in the agency for seven years and worked in forestry at the state level for 30 years, per the AP. — What happened to Pruitt’s “red team blue team” exercise: White House Chief of Staff John Kelly blocked an effort by Environmental Protection Agency chief Scott Pruitt to launch public debates to challenge accepted science around climate change, the New York Times reports. Despite a so-called "red team blue team" exercise “intrigu[ing]" President Trump, "the plan encountered widespread resistance within the administration from Mr. Kelly and other top officials, who regarded it as ill-conceived and politically risky, and when Mr. Pruitt sought to announce it last fall, they weighed in to stop him.”

— Meanwhile at the EPA: The agency's scientific advisory board hasn’t met in at least six months, the Scientific American reported last week. “Agency officials say the lapse isn't intentional and that it's just the result of delayed paperwork. That has prevented the group from meeting because there weren't enough members to make a quorum.”

— GOP media group helps promote Pruitt: The EPA hired a Republican media group, “Go BIG Media Inc,” to produce a report on Pruitt’s first year in office, E&E News reports. The company signed a contract with the EPA worth up to $6,500 to help with “design, graphics, production and edits of the EPA end of year report.” “This pales in comparison to the previous administration that paid $570,000 to a Democratic campaign manager's PR firm to run EPA's What's Upstream campaign," EPA spokesman Jahan Wilcox said.

— Trump vs. states: New York Attorney General Eric Schneiderman on Friday threatened to sue the Trump administration if it does not exempt the state from its five-year offshore oil and gas drilling plan. “The Trump administration’s plan to turn over New York’s coast to Big Oil threatens our environment and our economy, and I stand ready to use the full power of my office to fight back if the administration won’t listen to New Yorkers’ opposition,” Schneiderman said in a statement.

— Call me on my cell: Over the weekend, the New York Times published a deep dive into the Interior's Bureau of Safety and Environmental Enforcement and its leader under Trump, Scott Angelle, who "spent his first months on the job, records show, traveling between Washington, Texas and his native Louisiana to meet with executives at most of the top offshore oil companies" as the administration attempts to rewrite offshore drilling safety rules.

NYT reports: "During the gatherings, most of which were behind closed doors, he asked for suggestions about how federal safety and environmental rules should be rewritten. Sometimes he offered up his cellphone number, urging attendees to call rather than send emails or text messages, which could be subject to public records requests."

— Meanwhile: The oil and gas industry is pushing the administration to maintain its drilling plans. The American Petroleum Institute published four studies commissioned by the industry that says drilling could add $590 billion to the nation’s economy in the next two decades, the Hill reported.

— Trump vs. the world: French President Emmanuel Macron reupped his jabs at President Trump for leaving the Paris climate accord over the weekend. At the International Solar Alliance in New Delhi, Macron praised a group of women solar engineers for promoting solar energy as “some countries decided to just leave the floor,” according to the Associated Press. Macron did not mention Trump by name.

Residents in Portland, Maine walk across a snowy street during a nor'easter. (AP Photo/Robert F. Bukaty)

— Storm watch: Another storm is on its way. The Northeast will face its third nor’easter in less than two weeks as a southern storm moves up the coast, the Associated Press reports. The storm is currently expected to bring snow to New York and Philadelphia by Tuesday and southern Maine by Wednesday.

— The ocean’s fate: A recent study published late last week found that if global warming continues, with Antarctic sea ice collapsing and oceans changing, nutrients could become trapped in the Southern Ocean. That could harm the growth of tiny marine organisms, The Post’s Chris Mooney explains, and impact the food chain in other parts of the ocean. The shift could trigger a 60 percent drop in fishery yields in the Atlantic Ocean and 20 percent drop overall.

— Saudi Aramco's IPO may be delayed until 2019: The highest anticipated public listing of Saudi Arabia' state oil company will likely be delayed until next year, the New York Times reports, "reflect[ing] the difficulties in arranging what would easily be the world’s biggest-ever initial public offering... its finances have not been transparent, and both the American and London stock exchanges require both transparency and the protection of public shareholders." Cattle graze in a pasture against a backdrop of wind turbines near Vesper, Kan. (AP Photo/Charlie Riedel)

— Electric future: Now that Sempra Energy in Texas has purchased the state’s biggest utility, Oncor Electric Delivery, the company’s chief executive wants to use the excess wind power in the state to bolster its future with electric cars. “We’re kind of the leaders in electric vehicles,” Sempra CEO Debra Reed told Bloomberg News. “With the excess wind that’s being produced in Texas during certain hours of the day, there may be some good opportunities for electric vehicles to be used in Texas to consume some of that.” 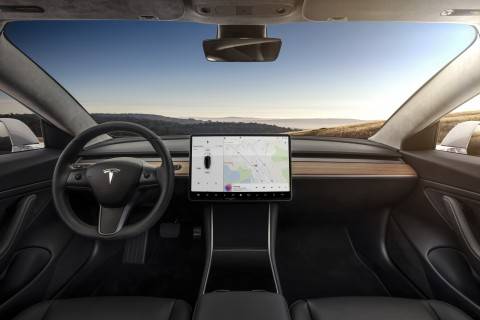 — Did you remember to spring forward? Justin Grieser writes for The Post on how things would change if we got rid of daylight saving time.