The Energy 202: How Brett Kavanaugh could rein in environmental rules on the Supreme Court Two years ago, the second highest court in the land upheld a controversial decision by the Environmental Protection Agency to block a permit for what would have been one of West Virginia's largest strip-mining operations.

The new coal mine promised so many jobs that in 2010 the state's Democratic governor — Joe Manchin III — sued the Obama administration over the EPA's decision to stop the project.

The only dissenter in the 2-1 decision in 2016 was Judge Brett Kavanaugh, who President Trump picked Monday to take Justice Anthony Kennedy's spot on the Supreme Court. And now Manchin is a senator for West Virginia -- and one of a handful of moderates in the tightly split chamber who will decide Kavanaugh's fate.

Kavanaugh's dissent is illustrative of the pro-business approach to environmental law that he cultivated throughout his dozen years on the U.S. Court of Appeals for the District of Columbia.

If confirmed, his limited-government jurisprudence will swing the court even further to the right.

Kavanaugh has insisted on upholding the expansion of regulatory authority only when there is clear evidence Congress intended to do so.

"It is a perfectly legitimate neutral principle for interpreting federal statutory authority," said Richard Lazarus, a professor of environmental law at Harvard. "But as applied to EPA, it had led Kavanaugh repeatedly and consistently to rule against EPA."

Policing regulatory overreach, at least as conservative legal thinkers see it, was once the job of the late Justice Antonin Scalia.

While the right-leaning high court often reins in government regulation, Kavanaugh has often taken that approach even further than many of the court's current conservatives.

For example, the D.C. Circuit struck down an Obama administration program regulating air pollution that drifts across state lines. Kavanaugh, writing for the majority, argued the EPA exceeded its authority under the Clean Air Act in crafting the so-called “good neighbor” provisions.

And just last year, the lower court also ruled against another Obama-era EPA program that even the Trump administration had yet to fully challenge, requiring manufacturers to replace a class of potent greenhouse gases called hydrofluorocarbons with other substances.

"However much we might sympathize or agree with EPA's policy objectives," Kavanaugh wrote, "EPA may act only within the boundaries of its statutory authority."

Kavanaugh has actually acknowledged the seriousness of man-made climate change when speaking from the bench. "The earth is warming," he once said. "Humans are contributing."

But when the Obama administration sought to use old environmental statutes to address that and other emerging environmental issues, Kavanaugh tried to strike the actions down.

Instead, Kavanaugh has pushed the EPA to consider the financial impact of its actions. "The bottom line is that EPA considered the benefits to animals of revoking the permit," he wrote in his dissent in the West Virginia coal mine case, "but EPA never considered the costs to humans."

Under former Administrator Scott Pruitt, the EPA is already reviewing how it adds up economic pros and cons of new rules. Kavanaugh "is a thought leader in deregulation," said Abigail Dillen, vice president of litigation for climate and energy at Earthjustice. "I think his writing on it gave it significant momentum."

More than 30 percent of filings in that court are administrative appeals, nearly double the average nationwide, according to one study. Senate Majority Leader Mitch McConnell (R-Ky.) reportedly tried to nudge Trump away from Kavanaugh because his lengthy record not only on the bench but also in President George W. Bush's White House makes his confirmation more arduous, though still likely.

For decades, the Supreme Court has generally hewed to a legal doctrine giving agencies wide berth in interpreting federal statute, much to the chagrin of conservatives wishing to rein in government.

Trump's first nominee to the court, Justice Neil Gorsuch, has argued for years in legal opinions that the principle, called Chevron deference after a 1984 case involving the oil company, needed to be revisited.

While Trump's new nominee has not been "vocal" about undoing the doctrine, "Gorsuch may find a comrade in his quest to overturn Chevron deference in Judge Kavanaugh," said Thomas McGarity, a professor of administrative and environmental law at the University of Texas.

Legal experts see Kavanaugh also joining conservatives to curtail the application of anti-pollution rules on wetlands and intermittent streams. Ever since the passage of the Clean Water Act in the 1970s, the court has struggled to define the extent of the federal government's jurisdiction under the law. In 2006, Kennedy staked out a middle-ground position between the court's liberals and other conservatives in an unusual 4-1-4 split.

"I'd be surprised if Justice Kavanaugh didn't decide it differently than Justice Kennedy," McGarity said. — Pruitt’s folks find the exit: Four EPA aides who worked under Pruitt are leaving the agency following their former boss’s resignation last week, The Post’s Juliet Eilperin and Brady Dennis report. Three of the four — Jahan Wilcox, Hayley Ford and Lincoln Ferguson — were seen as close allies of the former administrator. Indeed, Wilcox generated headlines of his own for his combative defense of Pruitt, once calling a reporter a “piece of trash" on the record.

To that end, Andrew Wheeler is already trying out a new approach with the media. The new acting EPA administrator will address the agency staff in a Wednesday afternoon event at the Washington’s agency headquarters that will be livestreamed and open to the press.

And Republicans are in no hurry to confirm a Pruitt replacement. About a dozen Republican senators have said this week that they would be happy to have Wheeler run the agency in an acting capacity indefinitely, with no real rush to taken on the confirmation process of finding a permanent replacement for Pruitt, Politico reports. — "Justice is overdue": Trump has pardoned the father-and-son Oregon ranching duo who were convicted in 2012 on charges of arson on public lands, The Post’s John Wagner, Juliet Eilperin and Mark Berman report, noting it was “a move their supporters hailed as a shift in how the federal government approaches the West.” The duo’s case sparked a 41-day occupation of the Malheur National Wildlife Refuge in 2016. White House Press Secretary Sarah Sanders said: “The Hammonds are devoted family men, respected contributors to their local community, and have widespread support from their neighbors, local law enforcement, and farmers and ranchers across the West. Justice is overdue.”

Tropical Storm Chris is shown off the eastern coast of North and South Carolina. (NOAA/Goes-East Imagery/Handout via REUTERS)

— Another Atlantic hurricane: Tropical storm Chris became the second hurricane of the 2018 season on Tuesday, and was expected to continue to strengthen through Wednesday likely into a Category 2 storm.

Where is it going? “But the strengthening storm is moving away from the Mid-Atlantic coast on a path out into the open Atlantic, although it may clip Newfoundland along the way,” The Post’s Jason Samenow reports. — The last plastic straw: EcoGlass Straws, a shop based in Hood River, Ore., is one such small business that has seen its niche craft boom to meet skyrocketing demand for alternatives to plastic straws. It plans to soon produce 2,000 handcrafted glass straws an hour, up from its current 1,000-straws-a-day pace, Bloomberg News reports. The rising demand has allowed the small company to drop its wholesale price to about $1 to $1.50 per straw. 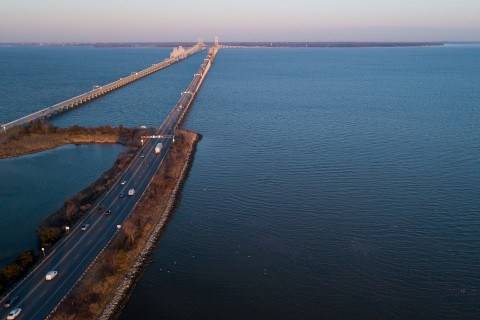 Developers go with the flow as new water rules kick in
Real-estate developers are adapting to new environmental rules in regions of the country where critical bodies of water are becoming increasingly imperiled.
Wall Street Journal 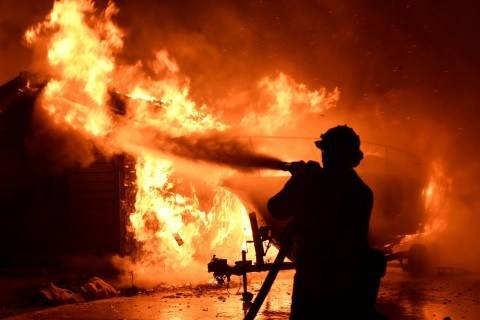 ‘416,’ ‘Witch,’ ‘Not Creative’: How fires get their names
Names usually come from where fires started. But sometimes, officials shrug and land on something more obscure.
The New York Times
OIL CHECK

— One pipeline Trump actually opposes: Prior to the North Atlantic Treaty Organization summit in Brussels, Trump called out Germany for its support of a pipeline deal with Russia, calling the nation “a captive to Russia.” “Germany, as far as I’m concerned, is captive to Russia because it’s getting so much of its energy from Russia,” Trump told NATO Secretary General Jens Stoltenberg in a heated on-camera exchange, The Post’s Michael Birnbaum and Seung Min Kim report, noting it was “nearly without precedent in the history of the post-World War II alliance.”

Trump blasted the nation for supporting Russian gas deals while the United States was paying to defend Europe against Moscow. Trump is set to meet with German Chancellor Angela Merkel, who on Wednesday defended her country, per the Associated Press.

Meanwhile, the U.S. Energy Information Administration (EIA) predicted in a new monthly report that oil output in the nation will surpass 12 million barrels a day for the first time in late 2019, which would make it the world’s largest oil producer. The prediction would also have the United States edging out Russia, Reuters reports.

— “We’ll consider it": Secretary of State Mike Pompeo noted the United States has not ruled out handing out waivers to countries seeking relief from sanctions against Iran. "There will be a handful of countries that come to the United States and ask for relief from that. We’ll consider it," Pompeo said in an interview Tuesday with Sky News Arabia, Reuters reports. Pompeo did not explicitly mention any countries that may acquire a waiver. Meanwhile, oil prices recoiled Tuesday following Pompeo’s remarks.

The benchmark for global oil prices fell more than $2 a barrel on Wednesday following Trump’s tariff threat against China, per Reuters. The shift also followed the administration’s signal that it may ease sanctions on Iranian oil exports for some countries seeking waivers.

— EVs to boost electricity demands: A new report from the Energy Department’s National Renewable Energy Laboratory predicts a growth in electricity demands as a result of the increased use of electric vehicles. “The study considers three scenarios, a reference case and medium- and high-adoption electrification predictions,” according to Utility Dive. “All indicate demand growth, but in the medium and high scenarios for 2050, U.S. electricity consumption increases by 20% and 38%, respectively, compared to business as usual.”

— After a decade-long hunt: A 1,300 pound, 15-feet long crocodile was captured in northern Australia. Rangers have been searching for the reptile since it was first seen almost a decade ago, The Post’s Lindsey Bever reports: