Traffic jams up on the eastbound State Route 91 Freeway near Corona, Calif. in 2010. (Bruce Chambers/Orange County Register via AP, File)

A tiff between two key government agencies over how to justify one of President Trump's biggest reversals of his predecessor's climate policies may provide progressive litigators with leverage to bring the rollback to a skidding halt.

At the beginning of August, the Environmental Protection Agency and the National Highway Traffic Safety Administration (NHTSA), a division of the Transportation Department, jointly estimated that keeping  the gas mileage rules set by President Obama for cars could cost lives. The restrictions on tailpipe emissions for future cars was one of the single biggest way the Obama administration planned to reduce climate-warming emissions.

But behind the scenes, the two agencies squabbled when writing a rationale for the reversal, Chris Mooney and I reported Wednesday. The key disagreement centered on the transportation agency’s claim that the Obama-era car rules would lead to more deaths. The agency contended upping car mileage per gallon would cost automakers money and make new cars several thousand dollars more expensive — leading people to drive older cars that perform less well in accidents.

But staffers at the EPA objected, according to documents released Tuesday.

The EPA staff’s critiques could empower critics of the proposed rollback, particularly in California. The Trump administration’s proposal would block California’s ability to set its own, more-stringent standards.

“The EPA documents challenging the Administration’s alleged safety rationale for rolling back fuel economy and tailpipe emissions standards are devastating from a legal perspective,” said David Hayes, who served as the Interior Department’s deputy secretary under presidents Bill Clinton and Barack Obama.

He added: "If in fact there was internal warfare, that just provides further grist for litigators.”

California's leaders had already given every indication they are preparing for a courtroom fight. Xavier Becerra, California’s attorney general, said the freeze is “a brazen attack, no matter how it is cloaked.” And California Air Resources Board Chair Mary D. Nichols said her team “will examine all 978 pages of fine print to figure out how the Administration can possibly justify its absurd conclusion."

Next month, the California air agency will vote on scrapping a provision that would keep California’s tailpipe rules in line with the federal government’s. Though the federal Clean Air Act grants California special authority to restrict auto emissions to clean up its historically smoggy cities, for the past decade policymakers there and back east in Washington had agreed to keep a uniform set of standards so carmakers did not need to meet different rules in different U.S. states.

The Energy 202 is publishing on an abbreviated scheduled this month. Our next edition will be Tuesday, Aug. 21.

— The new plans for Utah's national monuments: The Bureau of Land Management posted draft plans for the pair of Utah monuments the Trump administration shrunk last year, the Salt Lake Tribune reports. Within the former boundaries of Grand Staircase-Escalante National Monument, the tentative plan would put "nearly 700,000 acres in play that otherwise would have been off-limits to mineral extraction."

In particular, the plan includes transferring or selling 1,610 acres of land that was previously part of the two monuments and that have now been “identified for disposal” in the draft resource management plan, HuffPost reports, despite Interior Secretary Ryan Zinke's record of opposing the sale of publicly held lands.

— Less than 1 percent of available offshore tracts received bids during an auction: On Wednesday, the Interior Department had offered up for auction 14,622 tracts for oil and gas drilling on 801, 288 acres in federal waters off the Gulf of Mexico, The Hill reports, but just 144 of those garnered bids. That’s down from the just over 1 percent of tracts that received bids in March, the last time the Trump administration had an offshore lease sale. The administration still held up the sale as "another step our nation has taken to achieve economic security and energy dominance,” according to Interior Deputy Secretary David Bernhardt.

Sanders says the new tariffs put on some American products by Turkey are a “step in the wrong direction” and “out of retaliation” https://t.co/r5usPAqdw4 pic.twitter.com/gjixP3CSLd

— Tariff woes: The White House on Wednesday condemned the tariffs that Turkey has raised on $1 billion on U.S. goods, which follow Turkish President Recep Tayyip Erdogan’s call earlier this week for a boycott of U.S. electronics. White House press secretary Sarah Huckabee Sanders told reporters the tariffs were a “step in the wrong direction,” as the trade standoff between the two nations escalates, according to Bloomberg News. The Trump administration has imposed tariffs on Turkey in recent weeks to push for the release of an evangelical Christian minister, but Sanders also noted Wednesday that even if Turkey releases the pastor, the tariffs on Turkish steel and aluminum won’t be lifted because they are a matter of “national security.” — “Set the standard": Federal Emergency Management Administrator William “Brock” Long is cracking down on how the agency addresses sexual harassment allegations, telling The Post’s Lisa Rein and Elise Viebeck that senior agency leaders will determine how such harassment has gone unaddressed for so long. Long told The Post he wants FEMA to “set the standard for how allegations of harassment should be handled across the federal government.” Last month, Long said a former leader of FEMA's personnel department harassed women and even hired some as possible sexual partners for other male employees. Coleman’s lawyers counter that FEMA is trying to “demonize” Coleman.

King Bass, 6, left, sits and watches the Holy Fire burn from on top of his parents' car as his sister Princess, 5, rests her head on his shoulder Thursday night, Aug. 9, 2018 in Lake Elsinore, Calif. (AP Photo/Patrick Record)

— California is burning: After a record wildfire year in 2017, the state of California upped its resources including adding helicopters and emergency command centers and launching a forest management task force. “What the state didn’t do enough of, fire safety experts warn, is push through the sort of change that matters most: fewer ill-protected homes at the edge of the forest,” Bloomberg News reports.

Damage control after the flames are out: California crews are starting “suppression repair” to address the damage to the land left behind by firefighting efforts. It’s a “massive but often overlooked part of firefighting,” the Associated Press reports. “They replace barbed-wire cattle fences, gates and crushed culverts; smooth out dirt roads torn apart by heavy equipment; flatten the berms created by bulldozers and put hiking trails back in shape."

— Judge dismisses youth climate lawsuit: A judge in the state of Washington on Tuesday dealt a blow to young climate activists, dismissing a lawsuit the plaintiffs had filed charging the state with violating their rights by failing to protect against climate change. King County Superior Court Judge Michael Scott wrote in his ruling that he hopes the young activists will not be discouraged, but said that the issues in the case must be addressed via the legislative and executive branches and not by a court, the Associated Press reports. Balloons are released in Memorial Stadium before an NCAA college football game between Indiana and Michigan in Bloomington, Ind.  (AP Photo/AJ Mast, File)

— Deflating the balloon business: Amid an ongoing effort to ban plastic straws, environmentalists are turning their graze upward, to balloons. “The issue of straws has really broadened the marine debris issue,” Emma Tonge of the National Oceanic and Atmospheric Administration told the Associated Press, noting balloons may not necessarily be on people’s radar because of their “light and whimsical” image. 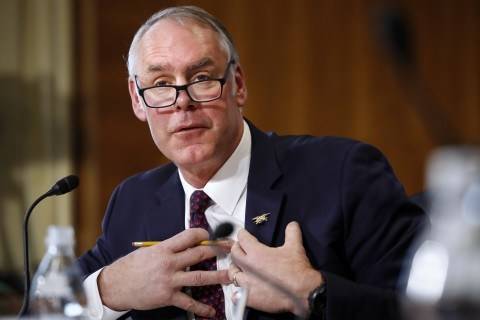 — The road ahead for Tesla: The electric automaker’s stock fell on Wednesday after a report from Fox Business that the Securities and Exchange Commission sent a subpoena to the company over chief executive Elon Musk’s tweet saying that he is considering taking the company private and had "funding secured." “The electric-car maker’s shares dropped 2.6 percent to $338.69, closing at the lowest since the chief executive officer set off a firestorm last week,” Bloomberg News reports.

Jessie the parrot in now home safe & sound with her owner and she had this to say to the firefighters who came to help her in #Edmonton https://t.co/Th2nlVCq7I pic.twitter.com/3ABkzH2nHY

— Potty mouthed parrot: When a firefighter tried to save Jessie, a macaw, from a roof after she escaped her home in London, the parrot instead had some “choice words,” for the crew, with one witness account saying the bird told the firefighter to “f--- off,” writes The Post’s Amy B Wang.