An international body of nearly 100 climate scientists convened by the United Nations have issued a stern warning to the rest of the world.

Unless governments around the globe undertake “unprecedented” action to reverse it, Earth’s temperatures will soar upwards of 1.5-degrees Celsius, or 2.7 degrees Fahrenheit, over preindustrial levels by the end of the century.

Warming above that threshold, the scientists write, could trigger the near-total loss of the world’s tropical coral reefs and the collapse of ice sheets in Antarctica and Greenland that would send sea levels soaring.

In short, the scientists say the world has only a dozen years to tackle climate change to avoid some of its most devastating effects.

That is the tough-love conclusion of the U.N.'s Intergovernmental Panel on Climate Change, or IPCC, in a major consensus report released Sunday evening after days of discussions last week between scientists and government officials meeting in South Korea.

The IPCC, seen as a definitive source on the state of climate science, outlined a path to keeping temperatures under those levels.

Because of that, write The Post’s Chris Mooney and Brady Dennis, the report “is being received with hope in some quarters because it affirms that 1.5 degrees Celsius is still possible.” Many observers abroad see President Trump's decision to withdraw the United States from the Paris climate accord as a backward step by the world’s second biggest emitter of carbon dioxide.

But the path to reverse the rising temperatures is arduous. And, so far, even nations with leaders who acknowledge the severity of climate change have not pledged to do enough under the 2015 Paris climate accord that would prevent 1.5 degrees of warming, according to the scientists.

Even if the world's governments muster the political will to fully address the problem — and that is a very big "if" — they will still need technical knowhow not yet invented to curb the emissions of climate-warming gases enough to keep the world under that crucial 1.5-degree mark. Among the steps the IPCC calls for are:

Right now, the world is not on track to stay under the 1.5-degree mark. The new report throws cold water on the idea current Paris promises will be enough to stop some of the most severe effects of global warming. Existing promises under the Paris agreement, which give countries wiggle room to come up with ways of meeting emissions targets, would lead to about 3 degrees Celsius of warming by 2100.

“It’s like a deafening, piercing smoke alarm going off in the kitchen,” Erik Solheim, executive director of the U.N. Environment Program, told The Post. “We have to put out the fire.”

Read The Post's entire story on the IPCC report here: 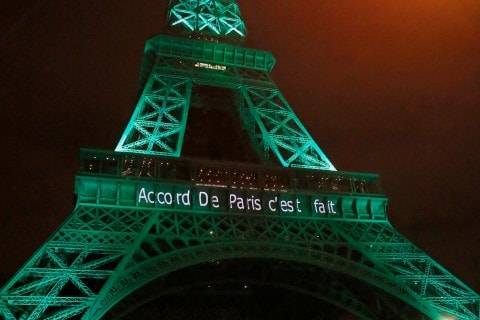 Energy and Environment
The world has barely 10 years to get climate change under control, U.N. scientists say
“There is no documented historic precedent” for the sweeping changes required to hold the planet’s warming to just 1.5 degrees Celsius (2.7 degrees Fahrenheit), the U.N. Intergovernmental Panel on Climate Change found.
Chris Mooney and Brady Dennis
POWER PLAYS

— Environmentalists wary now that Kavanaugh confirmed: The Senate voted 50 to 48 on Saturday to make Brett M. Kavanaugh the 114th Supreme Court justice. Kavanaugh was sworn in during a private ceremony at the Supreme Court on Saturday night. His confirmation ushers in a solid. five-vote block of conservatives on the high court that environmentalists worry will lead to a series of pro-business decisions hampering the government's anti-pollution efforts.

— Environmental economist wins Nobel: William Nordhaus of Yale won the Nobel Prize in economics for studying how markets can address climate change, the Associated Press reports. Nordhaus was the first person to model "the global interplay between the economy and the climate" and showed that “the most efficient remedy for problems caused by greenhouse gases is a global scheme of universally imposed carbon taxes," according to the Royal Swedish Academy of Sciences, which gives out the prizes. He won the prize on Monday along with New York University's Paul Romer.

— Corn wars:  Trump is set to announce that he will lift a federal ban on summer sales of higher-ethanol blends of gasoline, Reuters reports. The announcement, which will come Tuesday ahead of a trip to Iowa, is set to boost vulnerable Republicans in farming states. The lifting of the ban "is expected to be coupled with restrictions on trading biofuel credits" disliked by refiners. A collapsed ceiling is shown in the house of a Marine and his family whose home suffered severe damage after Hurricane Florence at Marine Corps Base Camp Lejeune in North Carolina. (Andrea Januta/Reuters)

— Military families in North Carolina deal with the aftermath of Florence...: Families living on a Marine Corps base in North Carolina say a private company managing their homes, Atlantic Marine Corps Communities, is ignoring issues like crumbling ceilings and moldy walls that were exacerbated by Hurricane Florence last month, The Post’s Emily Wax-Thibodeaux reports.

— ...while a new storm approaches the Florida Panhandle: Florida Gov. Rick Scott (R) announced he will declare a state of emergency for counties in the Florida Panhandle and the Big Bend region in anticipation of the strengthening Tropical Storm Michael, which the National Hurricane Center warned could become a hurricane on Tuesday or Wednesday, The Post’s Jason Samenow reports. “This area is expected to face the full range of hurricane hazards as early as Tuesday night, which include torrential rain, damaging winds, coastal flooding from rising ocean waters or storm surge and tornadoes.,” Samenow reports. Michael, the 13th named storm of the Atlantic hurricane season, could make landfall along the Gulf Coast on Wednesday. — California is burning: The state is expected to set an annual record for the amount of earth burned by wildfires, Bloomberg News reports. The amount of land burned has already grown to the size of the state of Delaware. And the month of October is usually a peak time for blazes in the state. “Eleven of California’s 20 deadliest fires occurred in previous Octobers, along with 11 of its most destructive, according to Cal Fire.” GE’s new CEO will need to decide whether to fix its power division or scrap it. (Luke Sharrett/Bloomberg News)

— The long to-do list to fix GE: What will it take to fix a storied company that is in a “inexorable downward spiral”? The Post’s Thomas Heath and Jena McGregor write that General Electric’s new chief executive, H. Lawrence Culp Jr., “faces a daunting turnaround." Among the decisions Culp will have to make is whether to sell its turbine business, GE Power, as demand for the services it provides to coal and gas plants wanes.

— Are these birds drunk? Intoxicated birds were wreaking havoc in a Minnesota town last week after eating fermented berries. “Incidents around town involving intoxicated birds appear to be more prevalent than in past years,” The Post’s Antonia Noori Farzan reports. Police Chief Ty Techar from Gilbert, Minn. explained that’s in part because they have not yet migrated south.