The Energy 202: Trump administration's release of a climate report on Black Friday didn't bury the news

The Trump administration did something over the long holiday weekend it has rarely done for most of the president's tenure. It actually acknowledged global climate change is real and its effects on the United States both now and in the future are dire.

But Friday's release of the congressionally mandated report was stuffed into the middle of a Thanksgiving weekend on one of the busiest shopping days of the year. As The Post's Brady Dennis and Chris Mooney report: "Several people involved in the report said its release originally had been planned for early December, but after a behind-the-scenes debate in recent weeks about when to make it public, administration officials settled on Black Friday."

If the intent of that publication date was to keep the climate report out of public view, the plan did not quite work. Major news organizations still featured the report prominently in print and over the airwaves, even days after its publication. If anything, dropping the report on Black Friday just gave Democrats another point of criticism of the administration and generated even more headlines.

"The Trump administration may want to bury this report so that it doesn’t get attention," Sen. Edward J. Markey (D-Mass.) said in a statement, "but we can’t bury our heads in the sand to the threat of climate change."

The National Climate Assessment, which is the product of scientists from 13 federal departments and agencies, found that the effects of climate change have already arrived in the United States. They include an increasing likelihood of events like deadly wildfires and debilitating hurricanes that have dominated the news in recent months.

The wide-ranging findings contained in the 1,600-page report gave regional papers the news hooks they needed to give the story prominent placement. Out west, papers such as the Idaho Statesman, Wyoming Tribune Eagle and Arizona Daily Star wrote headlines focused on the rising threat of wildfires. Back east, papers in coastal cities such as the The State in Columbia, S.C., and the Portland Press Herald in Maine featured front-page photographs of the destruction brought by flooding from hurricanes over the past two years.

As the managing editor of the Press Herald said on Twitter:

If the release of the climate change report really was timed to bury the news, it backfired badly. It’s on the front page everywhere today. We stripped it across A1 with a second story about Northeast/Gulf of Maine impact. Because this is the most important issue of our time. pic.twitter.com/hZELULzawR

The report also gave television journalists at NBC, CNN and even Fox News the opportunity to ask Republican politicians — who rarely if ever bring up climate change on their own —  about the looming economic and ecological crisis as well.

Sens. Mike Lee of Utah, Ben Sasse of Nebraska and Joni Ernst of Iowa were each asked what Congress could do to address the economic toll climate change could extract on the nation that was described in the report.Under the worst-case scenario, labor-related losses by the year 2090 as a result of extreme heat could total an estimated $155 billion annually while coastal property damage could go up to $118 billion.

While each senator to some degree acknowledged the climate is changing, they all brushed aside the need for the aggressive action, like placing a price on carbon dioxide or reinstating an Obama-era plan to curb greenhouse-gas emissions from coal-fired power plants.

"Any time that we are putting regulation out, we need to always consider impact to American industry and jobs," Ernst said on CNN's "State of the Union."

The White House played down the findings by saying the report was "largely based on the most extreme scenario," according to the Times. On Twitter, Trump himself dismissively asked "Whatever happened to Global Warming?” when discussing a cold spell gripping the Northeast over the weekend, daily weather with long-term climate trends.

In a call with reporters about the findings, federal experts were repeatedly asked about the timing of its release.

"For the most part, they demurred, saying that in part the report was finished early and that they wanted to make sure it was out ahead of both an American Geophysical Union gathering next month, as well as a major international climate conference in Poland around the same time," Dennis and Mooney write. "Rather, they implored reporters to focus instead on the contents of the report, which they said had not been tinkered with by administration officials." 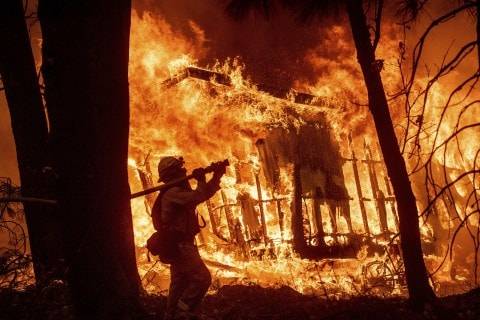 Energy and Environment
Major Trump administration climate report says damage is ‘intensifying across the country’
Scientists are more certain than ever that climate change is already impacting the United States, and that it is going to be very expensive.
Brady Dennis and Chris Mooney
THERMOMETER After a brief delay to let a downpour pass, volunteers resume their search for human remains at a mobile home park in Paradise, Calif. (AP Photo/Kathleen Ronayne)

— Speaking of wildfires: The Camp Fire, the deadliest wildfire in the history of California, has finally been fully contained. As of Sunday, nearly 14,000 homes burned in 17 days and more than 153,000 acres were charred, The Post’s Cleve R. Wootson Jr. reports. That is an area the size of Chicago. More than 1,000 firefighters helped beat back the blaze. Still, authorities believe the death toll, currently at 85, will continue to rise as officials continue to look for the 296 people still unaccounted for.

— “I’m trapped in the fire. It’s all around me”: That’s what a 42-year-old nurse and mother of five said when she called the eldest of her children to tell them she and others were trapped in a ring of fire. Tamara Ferguson, who eventually escaped with the help of multiple sheriff cruisers, was stuck after helping hospital patients who needed to be evacuated, the Los Angeles Times writes in this heartbreaking account. She tells her daughters she loves them, and to take care of their siblings. “No, you don’t understand,” the nurse pleads with her daughters when they say she’ll make it out. “I’m not going to make it. I was the best mother I could be.”

Another crisis unfolding: Towns in Butte County are “struggling to absorb the roughly 50,000 people displaced by the Camp fire,” the Los Angeles Times reports. A lack of adequate housing to accommodate evacuees has worsened the housing crisis in the state. “Butte County Housing Authority Executive Director Ed Mayer said that nearly 14,000 homes burned to the ground on Nov. 8, a loss of about 14% of Butte’s housing stock,” per the report. “Before the fire, the county’s homeless population numbered about 2,000. Now, it is expected to grow.”

More: Recovery has also been slow for those who endured another deadly blaze elsewhere in California last year. The Tubbs Fire in Santa Rosa was “the most destructive wildfire in California history at the time,” the Wall Street Journal reports. “The housing market in Sonoma County, which includes Santa Rosa, was already tight before the Tubbs Fire, with a vacancy rate of 1.8% for rentals and 1% for homeowners,” per the report. “Only 61 homes destroyed by last year’s fire in the county have been completely rebuilt, while another 1,700 are in the process of being rebuilt, according to building permit records. Replacement of many of the others has been delayed by the fact that most fire victims—66%, according to an April survey by the nonprofit group United Policyholders—had too little insurance.”

President Trump in a meeting with Saudi Arabia's King Salman bin Abdul Aziz in Riyadh. Trump has thanked Saudi Arabia for lower oil prices — a day after pledging the U.S. would remain a "steadfast partner" of the kingdom despite the killing of Washington Post contributor Jamal Khashoggi. (Mandel Ngan/AFP/Getty Images)

— “Thank you to Saudi Arabia”: In addition to his tweet about global warming, the president twice touted dropping oil prices over the Thanksgiving break. He tweeted Sunday that it’s “so great that oil prices are falling,” thanking himself for the feat. And last week, he thanked Saudi Arabia too despite a recent conclusion from the CIA that Saudi Crown Prince Mohammed bin Salman ordered the assassination of Washington Post columnist Jamal Khashoggi.

Oil prices getting lower. Great! Like a big Tax Cut for America and the World. Enjoy! $54, was just $82. Thank you to Saudi Arabia, but let’s go lower!

So great that oil prices are falling (thank you President T). Add that, which is like a big Tax Cut, to our other good Economic news. Inflation down (are you listening Fed)!

What is actually going on: The current surplus contributing to a drop in prices is “largely attributed to a miscalculation between demand and output by major producers, including Iran,” The Post’s Thomas Heath and Damian Paletta report. “He’s a piece of work,” Nancy Tengler, chief investment officer at Heartland Financial, told The Post following the president’s earlier tweet. “It’s all supply, that is the issue. The U.S. is producing 11.5 million barrels a day. We are largest producer in the world. There’s just more supply than demand currently. If Saudi Arabia keeps pumping and exemptions to Iran stay in place, prices are going to stay low.”

— Moving on to Iraq: "President Trump twice raised to the Iraqi prime minister the idea of repaying America for its wars with Iraqi oil," Axios reports. After Trump brought up the controversial idea out of step with international norms, then-national security adviser H.R. McMaster chided the president.

— “The main reason why coal sticks around is, we built it already”: While coal is contributing to the catastrophic effects of climate change, it shows no sign of disappearing, the New York Times reports. “While coal use looks certain to eventually wane worldwide, according to the latest assessment by the International Energy Agency, it is not on track to happen anywhere fast enough to avert the worst effects of climate change,” per the report. But coal is so hard to avoid because it’s “a powerful incumbent. It’s there by the millions of tons under the ground.” — Pipeline spat in Michigan: In the final weeks before he leaves office, outgoing Michigan Gov. Rick Snyder is pushing for a deal with Canadian oil transport giant Enbridge to replace the underwater section of the Line 5 pipeline. “Gov.-elect Gretchen Whitmer, elected this month, pledged during her campaign to shut down Line 5 and criticized the tunnel plan — as did fellow Democrat Dana Nessel, who won the race for attorney general,” the Associated Press reports. “Both take office in January and have said the Snyder administration should not steamroll the plan to enactment in the meantime.”

— Lobbying push from chemical giant: 3M has launched a campaign"to stave off new regulations and potentially billions of dollars" for a water contamination crisis impacting more than 1,500 communities and drinking water for tens of millions of Americans, Politico reports. The Minnesota-based company is arguing its chemicals don’t threaten people’s health, “a conclusion that numerous government agencies and independent studies have disputed,” per the report. “3M’s combative posture contrasts with a more conciliatory approach taken by other giant companies that have been implicated in the pollution crisis, as well as the industry’s primary lobbying group, the American Chemistry Council. Those organizations have supported federal efforts to evaluate and regulate the chemicals, banking on the Trump administration to deliver industry-friendly rules.”

— Waves in the clouds: The National Weather Service station in Cheyenne, Wyo. writes these "Kelvin-Helmholtz waves" are caused by "an instability that forms where there's a difference in wind speed and/or direction between the top and the bottom of those clouds."

Here's a great picture of Kelvin-Helmholtz waves over Cheyenne this evening around sunset.
Photo courtesy of Tom Mason. pic.twitter.com/mgd2uNTu7V