White House lawyers warned against it. So did members of the National Security Council.

Nevertheless, high-level Trump administration officials persisted in promoting the sale of nuclear energy technology to Saudi Arabia -- even though the sale would potentially violate laws meant to stop the spread of nuclear weapons technology.

That's according to a new bombshell report released Tuesday from Democrats on the House Oversight and Reform Committee.

The 24-page document is the latest instance of House Democrats flexing their newfound muscle in Congress. Republicans complained they were not included in the drafting of the report.

The head of the House Intelligence Committee, Rep. Adam B. Schiff (D-Calif), promised to also investigate the proposed nuclear sales.

From Rep. Stephen Lynch (D-Mass.), a member of the Oversight and Reform Committee:

But there are Republicans who found the discussions of the potential sale to be a cause for concern — and they work in the White House.

Among the biggest concerns were the potential conflicts of interest of former Lt. Gen. Michael Flynn. President Trump's ex-national security adviser once described himself as an adviser to a subsidiary of IP3, a firm that pushed a “Marshall Plan” for nuclear reactors in the Middle East.

But the fixation on helping the Saudis build nuclear reactors lasted much longer than Flynn's short tenure. Even the death of Washington Post contributing columnist Jamal Khashoggi at the Saudi Arabian consulate in Turkey did not quell interest at the White House.

As The Post's Tom Hamburger, Steven Mufson and Ellen Nakashima report: "The possible sale of nuclear power plants to Saudi Arabia was discussed in the Oval Office just last week. The meeting included Energy Secretary Rick Perry, representatives from the NSC and State Department, and a dozen nuclear industry chief executives, one of the people present told The Washington Post."

Why does Saudi Arabia want atomic energy? The kingdom does, after all, have the second-largest known petroleum reserves. But it says it would rather export that oil than use it for generating electricity, especially as the nation demands ever more air conditioning for its growing population. But some U.S. analysts worry the Saudis are looking for a covert way to develop nuclear weapons.

So why does the Trump administration want to help? The executive branch under Trump has consistently sought ways to support what it sees as the chief regional rival to Iran. But Democrats hinted at a potential personal motivation on the part of the president's son-in-law, The Post reports.

"The report released Tuesday notes that one of the power plant manufacturers that could benefit from a nuclear deal, Westinghouse Electric, is a subsidiary of Brookfield Asset Management, the company that has provided financial relief to the family of Jared Kushner, the president’s son-in-law and a senior White House adviser. Brookfield Asset Management took a 99-year lease on the Kushner family’s deeply indebted New York City property at 666 Fifth Ave."

Read more of the report here: 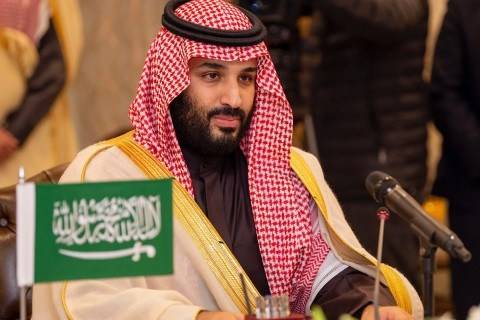 — The White House is readying a panel to assess whether climate change is a national security threat: The proposed Presidential Committee on Climate Security would be created by executive order and is being led by a National Security Council senior director William Happer, who “has said that carbon emissions linked to climate change should be viewed as an asset rather than a pollutant,” The Post’s Juliet Eilperin and Missy Ryan report. Happer is not formally trained as a climate scientist. Even though federal intelligence agencies have concluded climate change is a risk several times during Trump’s administration, this panel “represents the Trump administration’s most recent attempt to question the findings of federal scientists and experts on climate change.”

“This is the equivalent of setting up a committee on nuclear weapons proliferation and having someone lead it who doesn’t think nuclear weapons exist," Francesco Femia, chief executive of the Council on Strategic Risks and co-founder of the Center for Climate and Security, told The Post. "It’s honestly a blunt force political tool designed to shut the national security community up on climate change.” — High court to hear case on groundwater pollution: The Supreme Court agreed to consider whether the landmark Clean Water Act can limit underground wastewater dumping. The high court will hear an appeal of a case in Hawaii, which the Los Angeles Times writes is “an important test of the reach of the federal government’s anti-pollution authority.”

The context: “For more than a decade, the justices have been split over how far the federal government can go to regulate water inside the United States, whether it be wetlands, or, as in this case, groundwater,” per the report. “The court’s conservatives have argued the federal government can only regulate polluted water that flows directly into a river, bay or the ocean.” — Corn wars: Acting Environmental Protection Agency administrator Andrew Wheeler rejected a staff proposal to reduce how much ethanol needs to be blended into the fuel supply from 15 billion gallons a year to as low as 14.3 billion over three years, Reuters reports. The move may have implications for Wheeler as he faces confirmation to become the permanent head of the agency, if senators from oil-producing states withhold support.

— Meanwhile, House Democrats next target is EPA enforcement: Democrats leading the Energy and Commerce Committee announced Tuesday it will hold a Feb. 26 hearing on the EPA's "troubling enforcement record" in recent years. As The Post's Juliet Eilperin and Brady Dennis have reported, EPA inspections have fallen to a 10-year low under Trump. A sign on a door of the Environmental Protection Agency. (AP Photo/Pablo Martinez Monsivais, File)

— The EPA is trying to argue a little pollution is good for you: The Trump administrative actively sought out a scientist best known for his theory that low levels of toxic chemicals and radiation are good for you. Less than two weeks after an official at the EPA reached out to Massachusetts toxicologist Ed Calabrese early last year, his suggestions were published in the Federal Register, the Los Angeles Times reports. “It was a glorious moment for Calabrese, who had been snubbed for decades by mainstream public health scientists because of his controversial research and theories,” per the LA Times. “This view — that pollution and radiation can be beneficial — has many experts worried. The fact that such a position may become EPA policy, they say, portends a future in which corporate desires outweigh public and environmental health.”

— The White House wants its money back from California: The Trump administration says it plans to cancel about $929 million in federal funds for California’s high-speed rail and to seek the return of $2.5 billion in funds doled out for the project after California Gov. Gavin Newsom (D) said he plans to scale back the state's rail-building efforts,The Post’s Michael Brice-Saddler reports. The Transportation Department said it would be "exploring every legal option" to get the money back even as some accuse the administration of retaliating against a blue state.

— Remembering “the grandfather of climate science”: Wallace S. Broecker, a geochemist who popularized the term “global warming” in the 1970s and later developed a model for how oceans circulate heat and impact the climate, died Feb. 18 at 87. He first featured the term “global warming” as part of the title of a 1975 research paper that theorized “a natural cooling trend would soon give way to a rise in global temperatures,” The Post’s Harrison Smith writes. Still, Dr. Broecker was known best for his research on Earth’s seas and oceans.

“Raised in an evangelical Christian family in suburban Chicago, he grew up in a home where modern geological thinking was dismissed and where Earth was believed to be only a few thousand years old,” Smith writes. “But he eventually abandoned that false view of the planet’s history and became a grim prophet of its future."

— Man, it’s a hot one: Last month was the third warmest January on Earth on record, according to the National Oceanic and Atmospheric Administration. It tied with 2007 for the spot, based on NOAA global temperature data going back to 1880. Even as a record cold temperatures hit parts of the northern United States during the month, the data found there were record-high surface temperatures “across much of Australia and its adjacent Southern Ocean waters, southern Brazil, the ocean off the south coast of South Africa, and across parts of Africa, Asia, and the southeastern Pacific Ocean.”

— What’s the weather on Mars? Starting this week, you can find out, thanks to daily reports from NASA's new robotic lander, which arrvied on the planet in November.