The Energy 202: Biden lifting language for climate plan sparks questions about its seriousness The rollout of Joe Biden's $1.7 trillion climate plan did not go as smoothly as his campaign had hoped after readers discovered his campaign copied a handful of sentences from documents published by environmental advocacy groups.

Biden’s presidential campaign lifted language without credit, at times word for word, when crafting both its climate and education plans, The Post's Matt Viser, Jeff Stein and I reported Tuesday evening.

The campaign acknowledged the incidents and said they were inadvertent. Indeed, politicians often rely on think tanks specializing in certain issue for facts and legislative ideas. The plan from Biden, who weeks ago was criticized for being out of step with the rest of the Democratic Party on climate change, was praised Tuesday by many big environmental groups, including the Sierra Club and League of Conservation Voters, for his call to achieve net-zero emissions in the United States by 2050.

But for some liberal advocates, it was a sign that climate policies were not taken seriously by the campaign or the candidate.

“Biden appears to be taking ideas from other people and not giving credit. You can’t do that,” said Leah Stokes, a political scientist at the University of California Santa Barbara who specializes in climate issues. “It speaks of pulling an all-nighter and reading off of your friend’s essay.”

Other campaigns have used unattributed language similar to that crafted by primary sources. A policy plan by Sen. Kamala D. Harris (D-Calif.) includes a line that “black women are three to four times more likely to die from ­pregnancy-related causes than white women.” That is identical to a reference in an American Heart Association document, which attributes the statistic to the Centers for Disease Control and Prevention. “It’s a statistic,” campaign spokesman Ian Sams said when asked for comment.

But the issue was a particularly sensitive one for Biden, whose 1988 campaign was derailed after he plagiarized, in speeches, rhetoric used by British politician Neil Kinnock.

The use of other groups’ words in Biden’s environmental plan became known after Josh Nelson of the progressive group CREDO noticed Tuesday that much of its language about carbon capture sequestration appeared to resemble talking points from pro-industry groups.

Nelson found the phrases were a near-identical match with wording used by the Carbon Capture Coalition, whose members include Shell, Peabody Energy and Arch Coal.

On its website, the Center for Climate and Energy Solutions’s Carbon Capture Coalition says “its goal is to make carbon capture, use and storage (CCUS) a widely available, cost-effective, and rapidly scalable solution to reduce carbon emissions to meet mid-century climate goals.”

“It is certainly not a good sign for a Democratic presidential candidate to be copying things verbatim from a group associated with the coal industry,” Nelson said.

Alec Gerlach, communications director for the Center for Climate and Energy Solutions, said it does not coordinate with campaigns. But he added “carbon capture should be an essential element in any comprehensive strategy to eliminate carbon emissions.”

In its climate plan, the Biden camp copied a factoid — the “average American sewage pipe is 33 years old, with many pipes dating back 50 or even 100 years” — verbatim from the website for American Rivers in a section about water infrastructure.

Amy Kober, a spokeswoman for the American Rivers clean-water advocacy group, said her organization was “absolutely happy to see anybody come to our website.”

“Our information is available to all campaigns,” she added.

Read the rest of the story here: 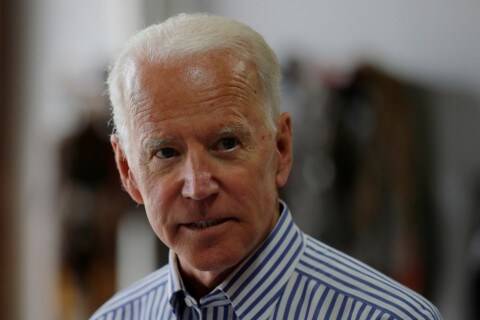 Politics
Joe Biden’s campaign acknowledges lifting language from other groups for its policy plans
The issue is a sensitive one for the former vice president, whose 1988 presidential effort was derailed by accusations of plagiarism
Matt Viser, Dino Grandoni and Jeff Stein
POWER PLAYS

— More on 2020: Green New Deal sponsor Rep. Alexandria Ocasio-Cortez (D-N.Y.) told The Hill’s Miranda Green she has concerns about the timeline included in former vice president Joe Biden’s climate plan, calling for a 2030 goal for climate action. As The Energy 202 wrote this week, Biden released a plan that he says will “go well beyond” the Obama administration to address climate emissions, calling for net-zero emissions by 2050. Although she didn’t provide an explicit endorsement, she called the climate plan released by Washington Gov. Jay Inslee the "golden standard."

Just spoke to @AOC who takes issue with the scale of @JoeBiden’s new climate plan. She says some action must be taken by 2030, not 2050.

In contrast, she calls @JayInslee’s climate plan the “Golden Standad.”

No, she’s not endorsing.. yet. She said

— The notion of a Green New Deal continued to pick up momentum this week when Sen. Elizabeth Warren (D-Mass.) released a $2 trillion plan for clean energy programs. The plan includes $1.5 trillion in federal purchases of zero-emission vehicles and other clean-energy products, $400 billion in clean-energy investment and $100 billion for helping countries buy U.S.-made clean-energy technology, as The Post’s Jeff Stein and I report.

— More calls for a climate debate: Inslee sent a letter to the Democratic National Committee calling on the chairman to allow for a presidential debate on climate change. "On behalf of grassroots Democrats and environmentalists around the country, I’m asking the DNC to lead the way and announce a climate debate today," the letter from Inslee, who was previously asked for such a debate, read. Demands to hold a dedicated debate are growing among 2020 candidates. Another presidential candidate, former Maryland congressman John Delaney, followed up Inslee's letter in a statement to say he supported a debate, too.

— Trump says climate change goes "both ways": Meanwhile, in a wide-ranging interview with Piers Morgan on “Good Morning Britain,” President Trump signaled that after a 90-minute meeting with climate advocate Charles, Prince of Wales, that he’s still unconvinced about the scientific consensus that the climate is warming, The Post’s Isaac Stanley-Becker reports. “I believe that there’s a change in weather, and I think it changes both ways,” Trump said. “Don’t forget it used to be called global warming. That wasn’t working. Then it was called climate change. Now it’s actually called extreme weather, because with extreme weather, you can’t miss.” — Climate kids back in court: A group of youths who first sued the federal government to take action on climate change in 2015 were back in court Tuesday to argue their lawsuit should move forward. “And the Trump administration, like the Obama administration before it, was there to argue once again that the lawsuit should be tossed out before it ever goes to trial,” The Post’s Brady Dennis reports.

An assistant attorney general for the Justice Department argued the request from the young Americans is unrealistic and unwarranted, while the attorney for the plaintiffs argued “her clients — a majority of whom are now old enough to vote — had been deprived of their fundamental rights as a result of government policies that fuel global warming. The group’s goal is to compel the government to scale back its support for fossil-fuel extraction and production and to support policies aimed at reducing greenhouse gas emissions."

— NRDC sues EPA for banning scientists from key panels: The Natural Resources Defense Council has filed a lawsuit against the Environmental Protection Agency for excluding many scientists from advisory panels that address science-related issues. EPA chief Andrew Wheeler is also named in the suit. “The NRDC said the Oct. 31, 2017 directive from Wheeler’s predecessor Scott Pruitt upended decades of EPA practices ‘for no good reason’ and without required public comment,” Reuters reports. “It said the agency has since used the directive to remove qualified scientists from its roughly 23 advisory committees, freeing it to replace them with industry representatives.”

Meanwhile: A bipartisan group of senators is planning to block 22 arms deals the Trump administration is seeking that would largely benefit Saudi Arabia, Demirjian adds. Sen. Robert Menendez (D-N.J.) said he plans to “introduce ‘22 resolutions of disapproval’ — one for each deal the Trump administration informed lawmakers last month it would push through, raising objections from Democrats and Republicans,” she writes. Sen. Lindsey O. Graham (R-S.C.), who has been a vocal critic of the president’s embrace of Saudi leaders, said he will join Menendez. — How Trump's latest trade war could affect automakers: Toyota Motor Corp. is warning that tariffs threatened on goods from Mexico could cost the car manufacturer’s major suppliers $1 billion, Reuters reports. “Faced with this threat, major automakers are also planning to delay some vehicle shipments from Mexico,” per the report. “The shipment delays would affect vehicles with high inventory levels on U.S. dealer lots if the tariffs take effect as threatened. Automakers are trying to speed some critical parts shipments this week ahead of the Monday deadline.”

Not so fast: In what could be the “most brazen defiance of the president since he took office,” Republican senators are already cautioning that they would block efforts to impose tariffs on imports from Mexico, The Post’s Erica Werner, Seung Min Kim, Damian Paletta and Mary Beth Sheridan report. “During a closed-door lunch, at least a half-dozen senators spoke in opposition to the tariffs, while no one spoke in support,” they write. “The lunch meeting occurred just hours after Trump, during a news conference in London, reiterated his intention to impose the tariffs next week and said it would be ‘foolish’ for Republican senators to try to stop him.” — This week could break the Corn Belt: States across the Corn Belt have broken or neared precipitation records. After an April that capped the wettest 12 months on record, The Post’s Andrew Van Dam, Laris Karklis and Tim Meko write, May data is expected to see more records. The deluge has hurt farmers, who usually have much more of their crop planted by this point in the season.

“Recent measurements show most of Illinois’s famous topsoils are more waterlogged than they have ever been, University of Illinois economist Scott Irwin said,” Van Dam, Karklis and Meko report. “Farmers cannot plant in that muck. It fouls their equipment and strangles their seeds. It is not enough for the rain to stop. The soil has to dry for as much as a week before they can plant again. According to the latest forecasts from the National Atmospheric and Oceanic Administration, that does not look likely.”

— A feline under the Beast: The infamous Larry the Downing Street cat sheltered under Trump's armored limousine during the president’s state visit to England. One reporter suggested he refused to budge.