When Environmental Protection Agency chief Andrew Wheeler goes to Japan this week to meet with other environment ministers, action on climate change won't be the priority. Instead, Wheeler plans to talk a lot about the tons of trash floating in the ocean he just flew over.

In an interview with The Post's Juliet Eilperin and Brady Dennis on Monday, Wheeler called the debris clogging the ocean one of the world's most pressing environmental concerns. And with six Asian nations topping the list of contributors of marine trash -- with China the top contributor of plastic pollutants -- the cause well fits into the broader Trump administration goal of ramping up pressure on Beijing.

"That’s where the problem lies,” Wheeler said. “My biggest concern is, how do we stop the waste from other countries?”

Wheeler's trip to the Japanese resort town of Karuizawa, for the first-ever meeting of environment ministers from the world’s 20 largest economies, comes as President Trump leveled a new threat to tariff $300 billion in Chinese imports.

Curtailing the amount of plastic polluting the world's oceans has emerged as one of the few environmental issues in the Trump era on which there is broad bipartisan agreement. Images of ocean wildlife found with six-pack rings around their necks or plastic bits in their stomachs tug at hearts across the political spectrum. And efforts to clean the seas of trash have no real industry opposition.

"We come from different regions, backgrounds, and political parties," Rep. Francis Rooney (R-Fla.) and Sen. Sheldon Whitehouse (D-R.I.) recently wrote in an op-ed for the environmental news site Grist. "Yet we are united by our passion for keeping our coasts and oceans healthy."

Trump himself has trumpeted that priority, staging a signing ceremony in October for the Save Our Seas Act, which reauthorized a marine trash program at the National Oceanic and Atmospheric Administration through 2022.

And when Trump was asked about the proposed withdrawal from the 2015 Paris climate accord, the president was sure to note Asia's contributions to both water and air pollution.

“You look at our air and our water, and it’s right now at a record clean. But when you look at China and you look at parts of Asia and you look at South America, and when you look at many other places in this world, including Russia, including many other places, the air is incredibly dirty, and when you’re talking about an atmosphere, oceans are very small,” Trump told The Post in an interview in November. “And it blows over and it sails over. I mean we take thousands of tons of garbage off our beaches all the time that comes over from Asia. It just flows right down the Pacific.”

Yet the administration, overall disinclined to support international agreements, has in the past opposed binding measures to address ocean trash. Unlike nearly every other country in the world, the United States declined to sign onto a framework that would require nations to track the movement of trash outside their borders.

And Wheeler, in his interview, expressed apprehension to recent municipal efforts to ban plastic straws for fostering a false sense of complacency among Americans.

“The plastic straw bans, that’s not what’s creating the problem in the oceans,” he said. “That’s a drop in the bucket, as far as the amount of plastic. . . . And I’m concerned that if people think, ‘Well if I get rid of my plastic straw, then that solves the problem.' ”

Read the rest of the interview here: 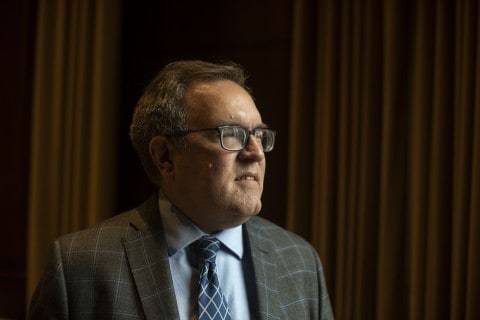 Climate and Environment
EPA chief will focus on ocean trash, not climate change, at upcoming global summit
Environmental Protection Agency Administrator Andrew Wheeler said in an interview that he will emphasize the importance of curbing marine debris during an upcoming summit with his Group of 20 counterparts in Japan, rather than seeking new action on climate change.
Juliet Eilperin and Brady Dennis
POWER PLAYS A house on Staten Island that was heavily damaged during Hurricane Sandy, shown in 2012. (Paul J. Richards/AFP/Getty Images)

— Watchdog boss retires early after “feel good” FEMA reports: John V. Kelly, the acting inspector general for the Department of Homeland Security, announced he will retire early, news that follows reports about how he pushed auditors to conceal issues and whitewash reports about the agency’s performance following disasters, The Post’s Lisa Rein and Kimberly Kindy report. In an email to The Post, Kelly wrote that no one “in DHS leadership or any member of Congress asked me retire.” — Congress to debate the costs of climate change: The House Budget Committee will hold a hearing Tuesday about the costs of climate change, where lawmakers are expecting to discuss the Green New Deal and the potential impact on the nation’s workers and economy overall. The event will give Republicans another chance to emphasize what they see as the sky-high costs of the plan to dramatically decrease carbon emissions all while increasing access to healthcare and high-quality jobs. “Congress should focus on policies that build on our progress – not sweeping overhauls of our economy that would stifle competition and innovation, add trillions of dollars to our nation’s debt, and fail to achieve our shared objective: protecting the environment," Rep. Steve Womack (R-Ark.) will say, according to remarks sent to The Energy 202.

— How the Trump administration plan to find oil will impact polar bears in Alaska: Earlier this year, the Interior Department halted approval for seismic surveys used to search for oil and gas reserves because concerns that the machinery would crush polar bears, Bloomberg News reports. That concerns prompted a switch to aerial surveys. But those too could negatively impact bears, seals and caribous, conservations and agency experts warn. Low-flying aircraft can cause caribou to flee, causing disruption and harm during these sensitive periods,” Interior’s Bureau of Land Management said in an April letter to a company looking to do the exploratory work. “The agency also warned CGG of the risk that the flights could drive polar bears to flee the coastline -- a possible violation of U.S. law barring the harassment of marine mammals,” Bloomberg reports, adding that the administration has no plans to vet the impacts of aerial surveys, even considering the risk to wildlife.

— Another Nature Conservancy exit: In the latest in a series of departures from the world’s largest environmental group, the head of the Nature Conservancy’s Caribbean chapter has left the organization. Luis Solorzano, the executive director of the Caribbean chapter, is leaving following an investigation into sexual harassment and misconduct, Politico reports. He “had been accused of workplace misconduct in complaints shared with POLITICO and interviews with former colleagues.”

— “It’s just a major punch in the gut”: Scientists from the National Oceanic and Atmospheric Administration and Louisiana State University say record rains in parts of the country will result in a near-record “dead zone” in the Gulf of Mexico. That means an area “the size of New Jersey could become almost entirely barren, posing a threat to marine species — and the fishermen who depend on them,” The Post’s Sarah Kaplan reports. She explains these oxygen-poor ocean areas occur in waterways when “algae are overfed by runoff from human activities like urbanization and agriculture — a phenomenon called ‘eutrophication.’”

The extent of the problem: “NOAA estimates that 65 percent of American estuaries and coastal waterways are moderately to severely degraded by this phenomenon….The dead zone in the Gulf of Mexico, fueled by the nutrient-laden water spilling from the mouth of the Mississippi River, is the second largest in the world.” And the recent extreme weather the Midwest has experienced is set to worsen the problem, a NOAA oceanographer warns.

CalFire firefighter Scott Wit surveys burnt out vehicles near a fallen power line on the side of the road after the Camp fire tore through the area in Paradise, Calif. (Josh Edelson / AFP/Getty Images)

— PG&E’s wildfire woes: The crisis facing the state’s largest utility has a major impact on its employees who have dealt with the fallout after state officials pointed fingers at the company for causing numerous catastrophic fires. After the deadly Camp Fire, California residents “hurled trash at 'workers. They spit and yelled. They slashed tires on PG&E trucks and painted ’85’— the number of dead — in red on the trucks’ doors, according to a union representative,” the San Francisco Chronicle reports. “If it was our equipment, then it’s our fault,” one employee told the paper. “It’s on PG&E. But there are a lot of upset people who don’t understand that it wasn’t us who started the fire. We are on the ground trying to get the town cleaned up and running.”

— How climate change impacts the spread of a mosquito-borne illness: A new study published in the journal Nature Microbiology found that warming climates could increase the transmission of dengue fever, spread through the Aedes mosquito and already common in warmer climates. “Globally, the study estimated that more than two billion additional people could be at risk for dengue in 2080 compared with 2015 under a warming scenario roughly representative of the world's current emissions trajectory,” the New York Times reports. “That increase largely comes from population growth in areas already at high risk for the disease, as well as the expansion of dengue’s range.”

— More U.S. businesses making changes in response to climate concerns: “From carbon credits to eco-labeling to energy use, companies are responding to warming temperatures and consumer concerns,” The Post’s Steven Mufson reports. “In a survey by the consulting firm Deloitte, 84 percent of business decision-makers said they were aware of grave U.S. and global climate-change reports issued in late 2018,” Mufson adds. “And two-thirds of those familiar with the reports have reviewed or changed their energy management strategies in response, the survey said.” Lindblad Expeditions, for example, a company whose ships contribute a high amount of carbon dioxide every year, announced it would offset its carbon footprint by investing in emissions-reducing projects.

— There's been an uptick in sightings of rare noctilucent clouds, which form on the edge of space, in the western half of the country, Matthew Cappucci reports for The Post. "They form 50 miles up, in a region of the atmosphere called the mesosphere," he writes. " Noctilucent clouds are most common near the poles. They’re rarely seen below 50 degrees latitude, but they’ve been venturing outside of their usual bounds much more frequently in the past decade. A potential reason? Climate change."

One of our forecasters snapped a few photos of the brilliant noctilucent clouds observed by many across the western U.S. last night. These clouds are the highest clouds in the atmosphere (~260,000-280,000 ft) & are only visible during twilight hours before & after sunset. #CAwx pic.twitter.com/k5oABCxThj