The Energy 202: Here's why automakers are so eager to extend electric car tax breaks

General Motors, Tesla and a fleet of other car manufacturers are going into overdrive to extend a tax break that has for a decade helped sustain the sale of cars that need little to no gasoline to run.

But in that effort, there is a roadblock: Oil and natural gas companies, which supply the gas fueling the internal-combustion engines dominating American roadways and which oppose extending tax breaks for vehicles that don't use their fuel.

This has triggered an intense lobbying battle on Capitol Hill between two powerful and traditionally closely linked industries, Steven Mufson and I report.

Oil and gas companies, said electric car proponent Rep. Daniel Kildee (D-Mich.), “prefer a world where every vehicle spews greenhouse gases, and this is not the world that I’m trying to encourage."

But opponents, in their own blitz of studies, op-eds and meetings with lawmakers, are emphasizing what they see as the economic downsides of the tax credit. They say extending the credit would be unfair to middle- and lower-class consumers unable to afford electric cars. And they’re making inroads with their own Republican allies.

“Regardless of whether you support the tax credit for electric vehicles or not, there is no denying taxpayers are overwhelmingly subsidizing Americans that can afford to buy their own car," said Sen. John Barrasso (R-Wyo.), chairman of the Senate Environment and Public Works Committee who has proposed legislation to wipe out the tax credit.

Here’s how the program now works: The federal government provides a tax credit of $7,500 to buyers for the first 200,000 electric vehicles sold by each company. After a manufacturer sells that first tranche, the tax credit drops by half for cars sold over the next six months — then by half again for another six months before disappearing entirely.

The reason the issue is coming to a head now: Two major auto companies, Tesla and GM, have already crashed into the 200,000-car threshold. And several more, including Nissan and Ford, will likely run into the same problem in the coming years.

Kildee, along with Sen. Debbie Stabenow (D-Mich.), sponsored legislation to raise that ceiling so companies would be able to sell three times as many electric vehicles before the tax credits, originally offered as a lifeline after the 2008 financial crisis, start to run out.

Stabenow and Kildee crafted their bill for months in consultation with major automakers. Not only does the legislation have the backing of the powerful Alliance of Automobile Manufacturers, which represents a dozen automakers including GM, it also has the support of several major environmental and public health groups. They include the Sierra Club and the American Lung Association, as well as the Edison Electric Institute, which represents the investor-owned electric utilities that would help power the plug-in cars.

It also, crucially, has the backing of two Senate Republicans, Susan Collins of Maine and Lamar Alexander of Tennessee.

But Derrick Morgan, senior vice president of the American Fuel and Petrochemical Manufacturers, said he has “met with dozens and dozens” of lawmakers to highlight the high cost of the tax break. The trade association, which represents refiners, worked with Ernst & Young to calculate that lawmakers’ plan to extend the tax break bill could cost the federal government $15.7 billion over 10 years. By comparison, the Joint Committee on Taxation estimates the government will spend $7.5 billion on the current credit between fiscal years 2018 and 2022.

“We have nothing against electric vehicles,” Morgan said. “Our thing is that we would like to have an even playing field.”

Right now, Stabenow is trying to figure out how to get the tax credit extension into a must-pass piece of legislation — possibly one introduced earlier this year by Sen. Charles E. Grassley (R-Iowa), chairman of the Senate Finance Committee, and Sen. Ron Wyden (Ore.), the ranking Democrat on the committee, that extended a variety of tax provisions.

Stabenow, who sits on that committee’s task force for examining energy tax credits, wants to persuade Grassley to include the credits. His spokesman would not comment on the issue.

All tax legislation, however, must originate in the House. The fact that a majority of Democrats on the Ways and Means Committee has sponsored Kildee’s electric-vehicle bill seems to bode well for credit supporters. 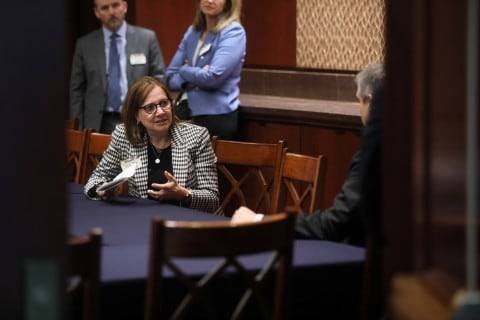 Climate and Environment
In lobbying battle for electric vehicle tax credit, it’s car makers vs. the oil and gas industry
A federal tax credit that has boosted electric car sales is starting to run out.
Dino Grandoni and Steven Mufson
POWER PLAYS

Good morning! It’s sunrise on the @DNC steps! Rested and ready to start day 2 of sitting in to demand a #ClimateDebate pic.twitter.com/xqnEUdPHwW

— Climate debate debate still rages: Dozens of protestors gathered for a demonstration hosted by the Sunrise Movement outside of the Democratic National Committee’s headquarters in Washington. One day before the first presidental debates, the youth environmental activist group continued calls for an official face-off centered on climate change. Earlier this month, this back-and-forth culminated in DNC Chair Tom Perez saying it would not hold a debate on a particular issue area. “I know that the crisis I see in my community is bigger than the few sentences they’re going to spend on it over the next few nights,” an 18-year-old demonstrator from Philadelphia told The Guardian.

Meanwhile: A science advocacy group called 314 Action is offering to put up $100,000 to hold a climate-focused debate, hoping other environmental organizations will join the effort, BuzzFeed News reports. “Climate change is an existential crisis and it’s worthy of an hour-and-a-half-long debate where Democrats can put forth their plans for voters to see,” 314 Action founder Shaughnessy Naughton told the publication. “Regardless of who wins the Democratic nomination, voters deserve to know what these candidates’ plans are for climate change.” — Standoff in Oregon: After state Republicans scattered across state lines to avoid a climate change vote, the state’s Democratic Senate president now says the bill may not even have enough Democratic support to pass. "House Bill 2020 does not have the votes on the Senate floor,” Oregon Senate President Peter Courtney said in the chamber Tuesday, according to the Oregonian. “That will not change.”

Shock among climate advocates: “The bizarre and unnerving eruption of partisan warfare here…took another stunning turn Tuesday when the climate bill — which would cut greenhouse gas emissions through a market-based cap-and-trade system — suddenly appeared to all but die,” The Post’s Joel Achenbach and Maureen O’Hagan report in this dispatch from Salem, Ore. “…Citizen climate advocates seated in the Senate gallery were so shocked by Courtney’s announcement Tuesday that they spontaneously stood up and turned their backs on him.”

...but is it a trap?: From an “undisclosed location,” one Republican state Sen. Herman Baertschiger told reporters over a speakerphone that members of his party weren’t ready to return to the state. “They fear a trick. They worry that the Democrats may pivot again and scrounge together enough votes to pass the bill,” Achenbach and O’Hagan write. — Meanwhile, in Maryland: Gov. Larry Hogan (R) signed an executive order to mandate that state-owned buildings reduce their energy consumption by 10 percent over the next decade. The initiative also mandates that a state agency audit the least energy-efficient buildings in Maryland every year, The Post’s Ovetta Wiggins reports. “Our administration is committed to ensuring that our state-owned buildings are as energy efficient as possible,” Hogan said in a statement. “This initiative seeks to reduce greenhouse gas emissions, while saving taxpayer dollars.”

— “It rained yesterday, it's a nice pretty day today”: In an interview with CNN, Agriculture Secretary Sonny Perdue answered a question about the planet’s climate crisis by talking about the weather. He told a CNN reporter that we “don’t know” the causes of climate change, and added “and obviously scientists — many scientists believe that it's human caused, other scientists believe it's not" when in fact the vast majority of climate scientists attribute the changes to human activity. When asked what other than humans have driven warming Perdue responded: "You know, I think it's weather patterns, frankly."

When asked by @Sen_JoeManchin what the agency’s budget request was for #LWCF, @Interior Assistant Secretary Susan Combs confirmed her office requested ZERO DOLLARS for one of the most successful conservation programs in the world. #FundLWCF pic.twitter.com/PcmF2yXOvM

— “Robbing Peter to pay Paul”: During a Senate Energy and Natural Resources hearing on the Land and Water Conservation Fund, both Republicans and Democrats challenged the lack of money for the fund in the administration’s proposed Interior Department budget. Sen. Angus King (I-Maine) accused the Trump administration of “robbing Peter to pay Paul” adding “to the extent we’re siphoning off these funds for other entirely different purposes that’s really not appropriate," as the Hill reports. “Unfortunately, although the LWCF is now permanently authorized, the program does not have any certainty of funding, as evidenced by the President’s budget proposal, which essentially zeroed out LWCF appropriations,” the panel’s top Democrat Joe Manchin (D-W.Va.) said during the hearing. “Permanent funding is the next step Congress must take.” — New World Bank President David Malpass breaks with Trump on climate change: President Trump in 2012 tweeted that the World Bank is “tying poverty to ‘climate change’ And we wonder why international organizations are ineffective.” But David Malpass has so far sought to reassure he will support the institution’s climate change initiatives, The Post’s Heather Long reports. “The [World Bank’s] mission is clear of poverty alleviation and of shared prosperity, and that includes living standards rising. That includes environmental and climate activity by the bank,” Malpass said. He also touted commitment to the Climate Change Action Plan, which will invest $200 billion by 2025 to help countries deal with the consequences of warming, Long reports.

— Frida the rescue dog is retiring: The Mexican navy announced this week Frida, a yellow Labrador retriever who became famous after helping in the aftermath of a major earthquake in 2017, is retiring as a rescuer. She saved the lives of 12 people over multiple disasters and has found at least 41 bodies during her career, Morgan Krakow writes for The Post.