At least five high-profile Democrats running for president will not be attending a town hall airing on MSNBC this week focused on climate change — an issue many in the 2020 field count among the most urgent facing the United States and the world.

The campaigns of Joe Biden, Elizabeth Warren, Kamala Harris and Beto O'Rourke told organizers the candidates will not attend the forum in Washington, according to Kelly Ogburn, spokeswoman for Georgetown University's Institute of Politics and Public Service, which is one of the event's hosts.

Staffers for a fifth candidate, Amy Klobuchar, told organizers they would check the senator's schedule but never got back to the university, Ogburn said.

The absence of Biden, who leads in most polls, and Warren, who often scores second in polling, comes just two weeks after one of MSNBC's rivals, CNN, hosted its own climate forum. All 10 candidates who qualified for the CNN event — including the five set to miss the MSNBC forum — showed up.

MSNBC's two-day forum, scheduled for Thursday and Friday, comes as environmental activists continue to hound candidates to sharpen their ideas for tackling global warming and clamor for the Democratic National Committee to hold an official debate specifically on climate change.

But the declined invitations show in part how hard it is for candidates to juggle the many policies they champion and places they need to visit to win over voters.

Warren will instead be participating in a Sept. 20 debate focused on LGBT issues in Iowa, a campaign spokeswoman said. And O'Rourke this week will be touring California, visiting a state prison and the skid row section of Los Angeles, according to his official schedule.

So far, Tom Perez, the DNC chairman, and other committee leaders have rejected those calls. The activists want a debate where candidates share a stage and wrangle with each other over environmental policy. By contrast, the MSNBC and CNN forums have candidates speak separately.

One reason the activists are upset is because they feel the climate issue is getting short shrift during the debates.

Moderators for the three official debates held so far have dedicated only a few minutes of questioning to the climate issue, usually toward the end of the debate as viewers begin tuning out.

For example, during the last debate, on Thursday, only six of the 85 questions asked by the ABC News hosts were related to climate change, according to an analysis from the liberal media watchdog group Media Matters for America.

But it’s unclear just how much appetite voters have for hearing about global warming.

CNN’s seven-hour extravaganza on climate change ended up being a ratings dud for the network. Averaging just 1.1 million viewers during the time slot, CNN came in third place behind Fox News and MSNBC on the evening of Sept. 4, according to Nielsen Media Research.

At the very least, the activists’ pressure has not only pushed the two cable news networks to hold the forums in the first place, but has also forced candidates to commit to policy positions far more aggressive in curtailing fossil-fuel use than were pursued during the Obama administration. — Saudi Arabian oil output takes major hit after apparent drone attacks: "Explosions and towering fireballs struck the heart of Saudi Arabia’s oil empire on Saturday," write The Post's Kareem Fahim and Steven Mufson. "The blows knocked out more than half the kingdom’s oil output for days or more and threatened to drive up already high tensions between Iran and its foes in the Persian Gulf."

What was hit? The blasts struck facilities in the districts of Khurais and Abqaiq run by state-run oil giant Aramco, which is the second-largest oil producer in the world and which has been preparing for an initial public offering to raise billions of dollars and help the kingdom move away from dependence on oil revenue.

Who is responsible? The Houthis, a rebel group in Yemen allied with Iran, claimed to have carried out the attacks. Iran itself denied accusations that it was responsible after Secretary of State Mike Pompeo blamed the nation on Saturday for what he called “an unprecedented attack on the world’s energy supply,” as The Post’s Kareem Fahim, Anne Gearan, Erin Cunningham and Steven Mufson report. Trump said the United States is ready to respond. “His administration was contemplating what U.S. officials characterized as a serious military response, though some in the Pentagon were said to be urging restraint,” the team writes.

Trump weighs in: In a series of tweets, Trump said he authorized a release of oil from the Strategic Petroleum Reserve and that he has told government agencies “to expedite approvals of the oil pipelines currently in the permitting process in Texas and various other States.”

Based on the attack on Saudi Arabia, which may have an impact on oil prices, I have authorized the release of oil from the Strategic Petroleum Reserve, if needed, in a to-be-determined amount....

....sufficient to keep the markets well-supplied. I have also informed all appropriate agencies to expedite approvals of the oil pipelines currently in the permitting process in Texas and various other States.

Saudi Arabia oil supply was attacked. There is reason to believe that we know the culprit, are locked and loaded depending on verification, but are waiting to hear from the Kingdom as to who they believe was the cause of this attack, and under what terms we would proceed! — Americans increasingly see climate change as a crisis: A new poll from The Post and the Kaiser Family Foundation found that roughly 80 percent of Americans say human activity is driving climate change, and almost 40 percent say climate change is a “crisis,” compared to less than a quarter of Americans who said as much five years ago. As more Americans describe what’s happening to the planet as a crisis, two-thirds say tPresident Trump is not doing enough to tackle the issue, The Post’s Brady Dennis, Steven Mufson and Scott Clement report in this first story from the team’s climate survey.

Here’s what they want to do about it: While more Americans call global warming a major problem or crisis, fewer than 40 percent say tackling it requires them to make “major sacrifices.” “For example, while nearly half of adults say they would be willing to pay a $2 monthly tax on their electricity bills to help combat climate change, just over a quarter say they are willing to pay $10 extra each month,” the Post team writes. “And while two-thirds support stricter fuel-efficiency standards for the nation’s cars and trucks, increases in the gas tax remain deeply unpopular. Instead, clear majorities say they would prefer that climate initiatives be funded by increasing the taxes on wealthy households and on companies that burn fossil fuels.”

When to act: Forty percent of Americans say climate action must happen over the next decade to avoid the worst impact,but the poll also found 12 percent say it’s too late.

What teens think: A majority of teens – more than 7 in 10 – say climate change will cause harm to individuals in their generation. The first major survey of teenage views on the issue since the boom of the youth climate movement also found that about a quarter of teens are taking action. Those teens have attended a rally or walkout or written to a public official to express their views about climate change. “Teens are slightly more likely than adults to accept the scientific consensus that humans are causing global warming, 86 percent versus 79 percent. But in other ways, kids are much like the rest of America when it comes to climate change,” The Post's Sarah Kaplan and Emily Guskin write. “..Just under half believe the United States must drastically reduce its fossil fuel use in the next few years to avoid the worst effects of climate change. And roughly 4 in 10 say mitigating the effects of warming will require major sacrifices from ordinary Americans.” “Markey has amassed a long record on environmental and energy issues — particularly on the subject of climate change, chairing a House select committee on the subject from 2007 to 2011 — as well as on other issues,” The Post’s John Wagner and Mike DeBonis report. “But national prominence has been elusive, and some Democrats in Massachusetts have come to believe he is vulnerable to a younger challenger.”

— NOAA chief seeks to reassure staff: Neil Jacobs, acting NOAA administrator, sent an email to agency staff in attempt to clean up after the controversial unsigned statement defending Trump and criticizing agency forecasters in the wake of Hurricane Dorian.

In the email, “Jacobs showered praise on forecasters for their efforts during Dorian — specifically highlighting the efforts of the Birmingham office,” The Post’s Jason Samenow reports. The email was a clear effort, he adds, to allay concerns that the unsigned statement would harm forecaster morale and negatively impact public trust in the agency. “The American people are depending on our agency,” Jacobs wrote. “There is no question in my mind that we will continue to provide expert analyses and predictions to keep Americans safe, and that all our line and staff offices will support the American public during these events. Our work saves lives.”

— Trump vs. California: Sen. Kamala Harris (D-Calif.) wants the Justice Department’s internal watchdog to probe why the department launched an antitrust investigation of four major auto companies over a deal they struck with California. “In an expression of hostility towards California’s regulatory authority, the Trump administration has launched a multi-pronged assault on California’s framework with the four automakers,” Harris wrote in a Friday letter. “ … This chain of events raises serious questions about whether federal law enforcement is being used to coerce the four automakers to abandon their efforts to make cleaner, less-polluting vehicles." 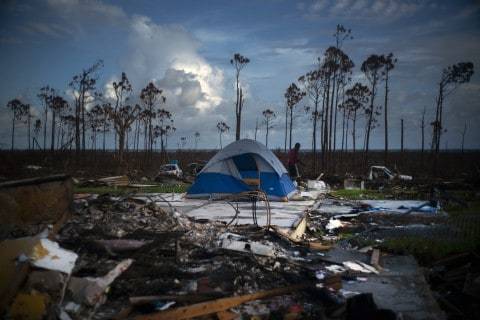 The Americas
Bahamas struggling for a way forward after Hurricane Dorian’s devastation
Thousands are living in shelters, grateful for food and a bed, but uncertain about their futures.
Karin Brulliard 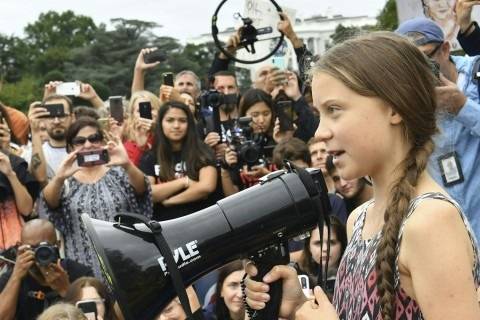 Climate and Environment
Teen activist Greta Thunberg takes her youth climate campaign to Washington
“Hope is something you need to deserve,” the 16-year-old from Sweden said in an interview with The Washington Post, as she continues her push for global leaders to take more aggressive action.
Sarah Kaplan and Brady Dennis 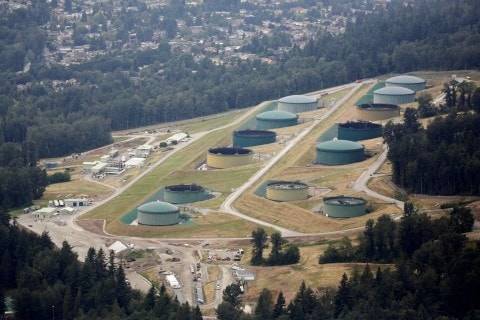 The Americas
An oil pipeline expansion is dividing Canada’s indigenous peoples
Some oppose the Trans Mountain Pipeline project. Others are competing with each other to buy it.
Amanda Coletta 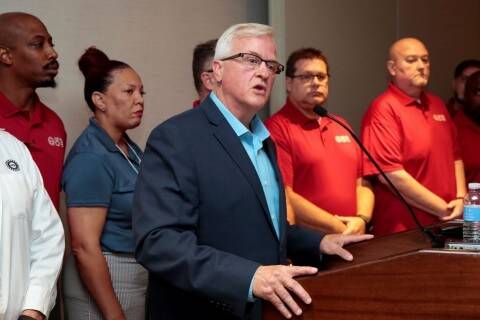 Nearly 50,000 General Motors employees go on strike after union talks break down
The United Auto Workers strike is set to begin at midnight, unless a deal can be reached at the negotiation table.
DAYBOOK

— "PLENTY OF OIL!": One of the president’s latest tweets following the drone attack on Saudi oil infrastructure led to a wave of jokes on Twitter.

Via The Post’s Elizabeth Bruenig:

when ppl ask what the secret to delicious fried chicken is https://t.co/rsJvLQ4SOl

And via The New York Times’s Astead W. Herndon: