All eyes were on activist Greta Thunberg when she bluntly told world leaders: “You are failing us.”

But what mattered most at Monday's U.N. climate summit was what China, India and the U.S. actually said — and what the three biggest emitters of greenhouse gases did not say.

Countries "once again stopped short of committing to the sort of far-reaching new goals scientists say are needed to rein in emissions," as The Post's Brady Dennis and Juliet Eilperin report from the summit.

“Greta Thunberg laid down a clear line in the sand, separating those countries and leaders who are united behind the science from those who continue to place the profits of fossil fuel polluters above the safety of their citizens,” Alden Meyer, director of strategy and policy at the Union of Concerned Scientists, said in a statement. “Sadly, most leaders from the world’s largest emitting countries failed this litmus test, dodging their responsibility to step up action as is essential to address the climate emergency we now face.”

Altogether, the top three emitters account for nearly half of global greenhouse gas emissions, according to the World Resources Institute. Their national policies are what will have the biggest impact on whether the world can hold global warming below 2 degrees Celsius (3.6 degrees Fahrenheit), which is the goal of the 2015 Paris agreement.

The aim of the Paris accord was for nations to ratchet up their emissions cuts over time. But it relied on voluntary pledges. The Obama administration, which brokered the agreement in 2015, hoped that over time the United States could wield its soft power to press other nations to cut emissions.

President Trump's election upended that plan. And this week's climate summit brought into stark relief how countries are still grappling with the fallout of Trump's promise to withdraw from the climate accord: China: China's Foreign Minister Wang Yi took a veiled swing at Trump. He sought to reassure other countries that the promised U.S. withdrawal won't affect China's goals under the international accord.

United States: After initially deciding to forgo the climate summit, Trump made a surprise, 14-minute appearance, listening to Modi's and German Chancellor Angela Merkel's remarks, according to The Post’s Seung Min Kim and Anne Gearan.

Read more about the summit here: 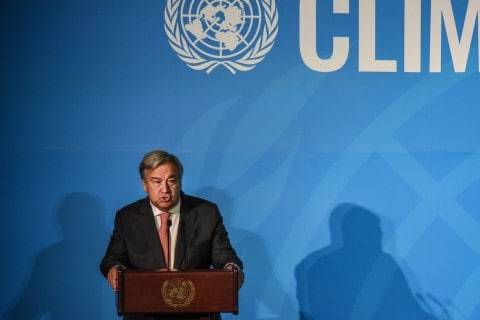 Climate and Environment
Countries promise more aggressive action at U.N. climate summit, but is it enough?
Days after millions of young people took to the streets around the world to protest for more aggressive action on climate change, dozens of world leaders arrived Monday at the United Nations facing a simple question: What’s your plan?
Brady Dennis and Juliet Eilperin

— “If you choose to fail us, we will never forgive you”: Thunberg reminded world leaders at the summit that “the eyes of all future generations” were on them. The teenager made no attempt to hide her emotions and anger as she warned that her generation would bear the brunt of the climate catastrophe if the world did not act fast.

— Sunrise’s first Democratic primary challenge endorsement: The Sunrise Movement has endorsed Jessica Cisneros, who is running to unseat an eight-term Rep. Henry Cuellar (D-Tex.). The youth-led climate organization pointed to Cuellar’s stance against the Green New Deal and that he has received hundreds of thousands of dollars in donations from the oil and gas industry. “Even though he calls himself a Democrat, he rakes in campaign contributions from fossil fuel CEOs and Wall Street and joins with Trump to do their bidding in Congress,” the group's executive director, Varshini Prakash, said in a statement. “Young people like Jessica Cisneros have seen the impacts of these failed policies for our entire lives.”

— CDC awards funds to study PFAS impacts at several sites: The Centers for Disease Control and Prevention and the Agency for Toxic Substances and Disease Registry announced $7 million will be awarded to institutions for a multisite study on the health impacts of PFAS-contaminated drinking water. The study was authorized by the National Defense Authorization Acts of 2018 and 2019, according to a news release. Various institutions will get a $1 million award to look at PFAS exposures in El Paso County, Colo.; Cooper Township, Mich. and North Kent County, Mich.; Montgomery and Bucks Counties, Pa.; Gloucester County, N.J.; Hyannis, Mass. and Ayer, Mass.; Hoosick Falls, N.Y. and Newburgh, N.Y.; and communities near the University of California at Irvine Medical Center. — Brown’s new climate gig: Former California governor Jerry Brown (D) told Bloomberg News the new climate think tank he’s launching with China’s chief climate official at the University of California at Berkeley is especially critical amid the administration’s trade war with China. “Trump is offering resistance to absolutely imperative climate actions,” Brown said in an interview. “This is an important collaboration, and it’s extra important because of the growing animosity at almost every level in the America-China relationship.”

— Trump vs. California: Environmental Protection Agency chief Andrew Wheeler sent a letter to the California Air Resources Board warning that the state had the “worst air quality in the United States” and “failed to carry out its most basic tasks,” under federal law. The letter threatened sanctions against the state, including federal highway funding cuts, over its “failure” to submit implementation plans required under the Clean Air Act, the Sacramento Bee reports. “The administration will give California until October 10 to rescind their ‘incomplete’ plans and resubmit new reports addressing 82 municipalities facing noncompliance,” per the report. 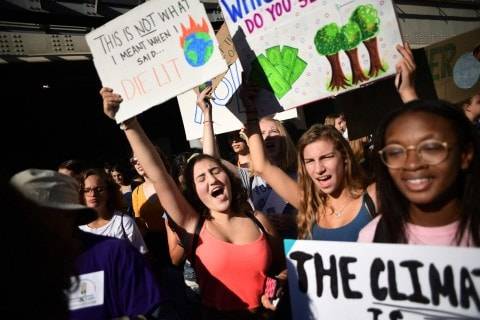 Science
Teen girls are leading the climate strikes and helping change the face of environmentalism
“We have a new wave of contention in society that’s being led by women," sociologist Dana Fisher said. "And the youth climate movement is leading this generational shift."
Sarah Kaplan 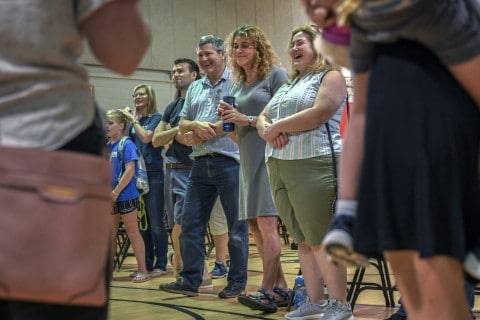 Social Issues
The USDA relocation to Kansas City is ripping apart the lives of its employees. Here are some of their stories.
In the months since the announcement, two-thirds of USDA employees decided to leave their jobs rather than move, forcing families at all stages of life to make wrenching decisions.
Hannah Natanson
DAYBOOK A purple-tinged sunset is seen near The Washington Post on Sunday evening. (Matthew Cappucci)

— You can thank a volcano for the purple tinge you’ve been seeing in sunsets: The purple hue that has been showing up in sunsets this summer may be because of Raikoke. The Russian volcano that erupted in June injected sulfur dioxide into the stratosphere, The Post’s Matthew Cappucci writes. “These sulfuric aerosols are known to scatter blue light. Sunsets are already red, so when you mix the two colors, you get purple.”