Twin leadership failures by the White House and the business community so far have hobbled the push for a sweeping tax code rewrite.

But the past 72 hours offer some qualified encouragement to those cheering for a breakthrough. At 1600 Pennsylvania Ave., President Trump’s decision Friday to replace Reince Priebus — his incredible shrinking chief of staff — with Homeland Security secretary John F. Kelly holds out a glimmer of hope that the former Marine general can impose some grown-up supervision on the Lord of the Flies atmosphere that’s prevailed there. “Kelly is an incredibly disciplined person who could bring order to the process if the animals in the zoo behave,” John McLaughlin, a former acting director of the CIA who served in seven administrations, tells The Post's Philip Rucker, Robert Costa and Dan Balz.

Easier said than done, of course, in a West Wing that last week looked as badly off its axis as at any time in Trump’s tumultuous half-year presidency. Even the Wall Street Journal editorial board isn’t holding its breath that a personnel change can fix what ails this White House, writing Friday that a “shuffling of the staff furniture won’t matter unless Mr. Trump accepts that the White House problem isn’t Mr. Priebus. It’s him.”

But as one person close to Kelly put it to Politico, “I think this is the best and last shot. This is it.”

Meanwhile, a big-money cavalry is finally riding out on behalf of a tax overhaul. With a border adjustment tax they opposed definitively off the table, the Koch brothers’ political network is launching a multimillion-dollar campaign to press the case for a wholesale revamp. It launches today, at a Newseum event guest-starring Treasury Secretary Steven Mnuchin and Marc Short, Trump’s top lobbyist. This Friday, the Business Roundtable is kicking off its own seven-figure assist, sponsoring a national TV and radio blitz. And finally, the American Action Network, the center-right nonprofit group, plans to spend $20 million promoting the effort, including $5 million in August.

As with the Kelly move, time will tell whether the lobbying push represents the leading edge of a new seriousness or a cosmetic effort.

So that's big GOP $, plus big Koch $ and big corp (Roundtable) $. Does that sway voters/members? And can it survive a detailed draft? https://t.co/XbjWXOg36U

And as with the Kelly move, some helpful engagement by the president would go a long way toward making the difference. Over the weekend, Trump tweeted that he wants Senate Republicans to remain focused on health care:

Unless the Republican Senators are total quitters, Repeal & Replace is not dead! Demand another vote before voting on any other bill!

And White House budget director Mick Mulvaney, appearing Sunday on CNN, affirmed it is “official White House policy” that the Senate should keep working on Obamacare before voting on anything else. That demand will become unworkable in the September when lawmakers need to lift the debt ceiling and approve a government funding package. (Not to mention that it's highly unpopular: nearly two-thirds of respondents in a new Reuters poll want to keep Obamacare in place or see it slightly modified, and only 29 percent want Republicans to continue working on a new health-care bill.)

It could also complicate the picture for a tax overhaul, since congressional Republicans may need to repurpose the House-passed health-care bill as a vehicle for the measure. The GOP’s internal deadlock on a new budget threatens to hold up the reconciliation rules they need in place to bypass Democrats in the tax debate. So Senate Republicans are eyeing a strategy that would allow them to skip the spending blueprint in favor of retooling the health-care bill and its reconciliation instructions instead.

That such an unorthodox move is under serious consideration underlines the urgency for Republicans to post their first major legislative win. — Trump over the weekend tweeted yet again on one of his favorite topics, the continued strength of the stock market:

He’s understandably been a lot quieter on the performance of the dollar, a metric that some market watchers think more accurately reflects confidence in his economic leadership. The greenback surged along with equities in the weeks after Trump's election but has since given back those gains and then some. Bloomberg's Lananh Nguyen  and Liz McCormick report: "To many, it reflects deepening worries the turmoil embroiling Washington -- much of which has been Trump’s own making -- is undermining his ambitious economic agenda. And as his administration has lurched from one crisis to the next -- from the firing of FBI Director James Comey to allegations of collusion with Russia and the Republican Party’s failure to repeal Obamacare -- something of a consensus has emerged in the currency market. And that’s to sell the dollar."

— The economy rebounded by growing at an annualized pace of 2.6 percent in the second quarter of the year, but persistently weak inflation is casting doubt on the Fed's plan to continue raising interest rates. The Post's Ana Swanson: "Less spending by state and local governments, as well as lower investment in housing and company inventories, dragged on growth in the second quarter. But those effects were offset by an increase in other types of investment, greater consumer spending and stronger exports... While the 2.6 percent growth in the second quarter signals a rebound from the previous quarter, it still falls short of the 3 percent to 4 percent growth the Trump administration has been targeting. Many of President Trump's economic plans, including tax cuts and the administration's budget, rely on having higher economic growth to generate more revenue for the government. But while the current economic expansion is already the third-longest on record, rates of growth have remained stubbornly low, due to longer-run changes in the economy, such as the aging of the U.S. population."

— And while Trump may not be making good on much of his agenda, U.S. corporate profits are on a tear. The biggest American companies are poised to post the second consecutive quarter of double-digit growth for the first time in six years. The Wall Street Journal's Theo Francis and Thomas Gryta report: "The second-quarter profit gains are spread across industries from Wall Street banks to Detroit’s car factories to Silicon Valley’s software labs. Earnings are expected to decline only in the utilities sector, according to data from Thomson Reuters." 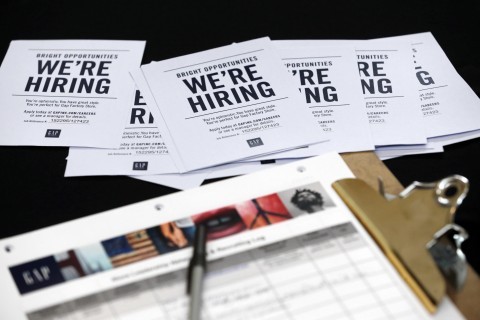 This chart suggests the unemployment rate isn’t as low as it seems
The unemployment rate has fallen to exactly where it was back in March 2007 before the Great Recession struck, but wage growth has continued to be sluggish as if the labor market remains weak.
Vox
POCKET CHANGE

— More fallout from the Wells Fargo mess: My colleague Renae Merle reports that the bank's  acknowledgment that it charged 800,000 of its customers for auto insurance they didn't need over six years is already sparking some political backlash.

Cap Alpha's Ian Katz sees the fallout potentially shaping the financial deregulatory debate: "Our deep analysis is that it's bad for everyone, except perhaps for defenders of the CFPB," he writes in a Sunday night note to clients. "This is another headache for Wells, which is already facing reputational challenges, and a poke in the eye for Republicans and others who want to neuter the CFPB. It could also end up being unhelpful to broader efforts to reform Dodd-Frank, because it strengthens the arguments of Democratic lawmakers including Elizabeth Warren and Sherrod Brown that banks need tougher, not lighter, oversight." 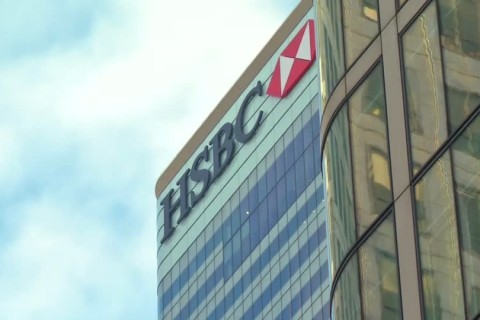 HSBC to Buy Back Up to $2 Billion in Shares
The bank said it would buy back more shares as it reported better-than-expected earnings in the second quarter.
New York Times 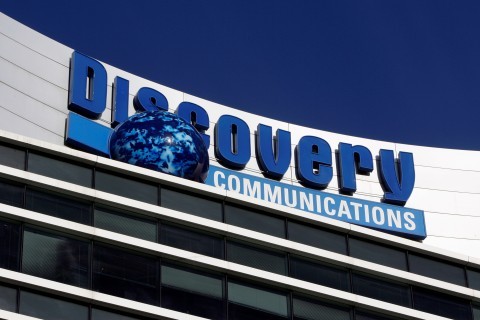 — Lawmakers returning from the August recess will have just 12 legislative days to raise the debt ceiling before risking a default. Treasury Secretary Steven Mnuchin wrote Congress on Friday urging action by Sept. 29. On Capitol Hill, there is no clear strategy yet for dealing with the must-pass measure. The Wall Street Journal's Kate Davidson reports: "Mr. Mnuchin has made clear the administration wants to see the debt limit increased, with no strings attached. But GOP leaders will almost certainly need to rely on Democratic support to get any type of increase to the president’s desk, something Democrats might be reluctant to provide without something in return. They have been unified in opposition to Republicans on other issues."

— The Republican coalition is increasingly showing the strains of trying to hang together behind an unpopular, galvanizing president. Last week, those bridling at Trump's style appeared to demonstrate a new willingness to confront him. The Wall Street Journal's Siobhan Hughes and Thomas M. Burton: "In Congress, some Republicans are pushing back at Mr. Trump through actions. Last week, the House and Senate passed legislation that would make it hard for Mr. Trump to relax economic sanctions on Moscow or to restore Russia’s control over diplomatic compounds, in response to U.S. intelligence findings that Russia interfered in the elections, which Russia denies. In the meantime, Republican senators moved to block every path Mr. Trump might try to use to fire and replace Mr. Sessions, out of concern that doing so would disrupt the independence of the investigation into any election interference."

— Meanwhile, Neil Irwin of the New York Times sees greater odds that National Economic Council director Gary Cohn will move out of the White House, since he isn't moving up in it:

With Gary Cohn not being named chief of staff, odds of him being nominated for Fed chair edge higher, I think. 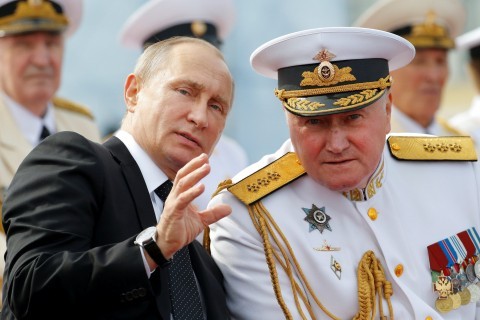 Putin orders cut of 755 personnel at U.S. missions
The move signals the end of hopes for better relations with Washington.
Andrew Roth
THE REGULATORS

— Former Trump campaign manager Corey Lewandowski says John Kelly should make it a first order of business to fire Richard Cordray, the director of the Consumer Financial Protection Bureau, who's rumored to be on his way out anyway for a gubernatorial bid in his native Ohio. “The general should re-look at firing Richard Cordray,” Lewandowski said on NBC's "Meet the Press" on Sunday. "He is a person who is now all but running for governor in the state of Ohio, and he’s sitting in a federal office right now.” 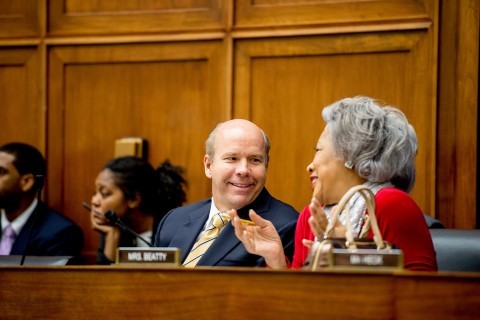 John Delaney: Why I’m running for president
My vision for the country is based on my own American Dream, and my focus is on preparing our country for the future.
John Delaney 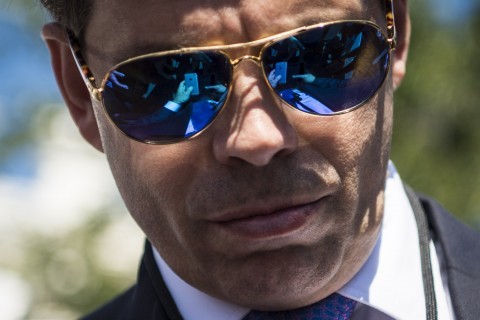 Scaramucci learned his press tactics from Wall Street. They’ll only get uglier.
Beltway journalists should be ready for a more aggressive approach than they’ve ever seen.
Heidi N. Moore
DAYBOOK

From The Post's Tom Toles: "Will the GOP need to rearrange the orchestra chairs on the Titanic?" Watch the Fact Checker’s guide to the debt ceiling:

Was this the Trump administration’s worst week in Washington?

Spicey is out. The Mooch is in:

From Stephen Colbert, the rise of Anthony Scaramucci: