Your monthly premiums could be 20 percent lower if you buy the kind of short-term health plan the Trump administration is seeking to expand. But you won't necessarily get benefits such as maternity care or prescription drugs.

Yesterday was the deadline to comment on a proposal from the Department of Health and Human Services to let people buy these lean, short-term plans for a full year instead of just three months — and the agency got lots of mail from industry groups and medical associations urging it to modify or change its course.

If the administration finalizes the proposal — which could happen within the next few months — it will please conservatives who view it as a solution to expensive health plans under Obamacare. Because short-term plans are currently designed to basically tide people over during an unexpected coverage gap, such as a job loss, they’re exempt from the Affordable Care Act’s expansive coverage requirements.

But expanding the availability of these plans could also split the insurance market in two, siphoning healthier people into cheaper plans, while those who remain in ACA-compliant plans face premiums that spiral upward even faster, as my colleague Carolyn Y. Johnson explains here.

That’s precisely the concern being raised across the health-care stratosphere. The American Medical Association has warned it could “disrupt and destabilize the individual insurance market.” The American Academy of Family Physicians said it would allow insurers to avoid covering “vulnerable, expensive patients.” More than 100 patient groups have signed a letter in opposition.

TODAY is the deadline to tell HHS not to extend short-term health plans.

The outcome is clear – Patients living with CVD, stroke survivors and others with pre-existing conditions will suffer if this rule becomes law. Add your voice: https://t.co/vaKywuY4oj pic.twitter.com/dZmYLPKUon

From the Crohn's and Colitis Foundation:

We are joining several other voluntary health organizations in urging the Administration to withdraw the proposed rule on short term health plans and notifying Congress of our concerns. See our coalition letter to Congress here: https://t.co/IqEWfZgqq5

Even health insurers — who typically like more flexibility in the types of plans they can design and sell — aren’t fully on board with expanding short-term plans.

America’s Health Insurance Plans, the largest association representing health insurers, yesterday urged HHS to allow such plans to be purchased for just six months, not a full year, and ensure consumers are aware of what the plans don’t cover.

The Blue Cross Blue Shield Association, whose members participate heavily in the Obamacare marketplaces, also said it has significant concerns that allowing consumers to stay on these plans for a full year “would cause rates to increase for those who need or want comprehensive health insurance coverage.”

Hopefully, you had kids already, because under the short-term health plan expansion encouraged by an executive order signed last year, covered maternity care vanishes in 100% of plans analyzed by @KaiserFamFound.

Underscoring these objections, short-term policies are so lean that people who have them don’t even satisfy Obamacare’s requirement for having health-care coverage. Of course, that won’t matter starting next year, since Congress has canceled the penalty for being uninsured.

So what might these short-term plans cover — and not cover? It’s easy to get a sense because they’re already on the market. In an analysis released yesterday, Kaiser Family Foundation researchers looked at two dozen short-term plans sold in 45 states and the District through insurance brokers eHealth and Agile Health Insurance. A few of their findings:

“People who buy short-term policies today in order to reduce their monthly premiums take a risk that, if they do need medical care, they could be left with uncovered bills and/or find themselves “uninsurable” under such plans in the future,” the researchers wrote, although they also noted these patients could always buy more generous marketplace plans during the next enrollment period.

Short-term health insurance plans also generally deny coverage to people with pre-existing existing conditions, and exclude coverage of those conditions just in case you sneak through medical underwriting. That's why their premiums are so much lower than ACA plans.

What you need to know about President Trump’s junk plans and Republicans’ latest effort to undermine our health care → https://t.co/GJ1RAgrUXS In this file photo, lettuce is harvested at a farm in Wellton, Ariz., east of Yuma. (AP Photo/Jeff Robbins, file)

AHH: U.S. officials still don’t know the source of the nationwide outbreak of dangerous E. coli infections from romaine lettuce. The FDA and CDC are maintaining a broad warning to consumers to throw out romaine in any form from Yuma, Ariz. and to avoid any romaine from unknown origins, our colleagues Lena H. Sun and Joel Achenbach report. The outbreak involves a dangerous strain of E. coli, which produces a toxin that can enter a person’s bloodstream and damage kidney function. Symptoms of infection include vomiting, painful cramps and diarrhea that is often bloody.

Investigators are conducting field tests in the Yuma area to determine the origin of the problem -- and eight sick prisoners in Nome, Alaska may have provided a clue.  All the prisoners from the Anvil Mountain Correctional Center ate lettuce from a single supplier, which state officials traced back to a farm in Yuma. “FDA’s investigation is still ongoing. What they have is not conclusive,” FDA spokesman Peter Cassell said. “We are still working on the traceback. We have not traced it back to a particular farm or supplier.” Trump at a meeting with representatives from the Pharmaceutical Research and Manufacturers of America at the White House. (Ron Sachs/Pool via Bloomberg)

OOF: Health care industry trade groups upped their spending on lobbying in the first quarter of 2018 during efforts to tackle health issues within a major spending deal and budget deal, CQ News’s Mary Ellen McIntire reports. Here are some of the highlights of the groups' expenditures: OUCH: The Senate has postponed a Wednesday confirmation hearing for doctor Ronny Jackson to lead the VA, after top Republicans and Democrats raised concerns about his qualifications and oversight of the White House medical staff, The Post's Seung Min Kim, Lisa Rein and Josh Dawsey report. Jackson was scheduled to testify before the Senate Committee on Veterans’ Affairs. Now, what was already looking to be a difficult confirmation process for Trump's nominee appears in further jeopardy.

"In addition to Jackson’s lack of management experience, the former combat surgeon had come under fire for his glowing appraisal of Trump’s health following his annual physical in January," Seung Min, Lisa and Josh write. "Jackson said then that the president might live to the age of 200 with a healthier diet. In recent days, fresh concerns arose about Jackson’s management of the White House medical office, said the officials, who declined to provide details."

“I can tell you we’re vetting out Jackson,” said Sen. Jon Tester (Mont.), the committee’s ranking Democrat. “I can’t get into specifics, but we’re doing our job to make sure he’s fit for the job.” — Sen. Bernie Sanders (I-Vt.) will announce a plan for the federal government to guarantee a job paying $15 an hour and health-care benefits to every American worker “who wants or needs one,” embracing the kind of large-scale government works project Democrats have shied away from in recent decades, The Post's Jeff Stein reports.

The measure would fund hundreds of projects throughout the United States aimed at addressing priorities such as infrastructure, caregiving, the environment, education and other goals — and guarantee every American would be entitled to a job under one of these projects or receive job training to be able to do so, according to an early draft of the proposal. But a Sanders representative said they hadn't yet done a cost estimate or proposed how it might be funded.

“Sanders joins two other rumored 2020 Democratic presidential contenders who have expressed support for the idea of a jobs guarantee,” Jeff writes. “The push reflects a leftward move in the party's economic policy, away from President Barack Obama's use of public-private partnerships or government incentives to reshape private markets and toward an unambiguous embrace of direct government intervention.” — Wisconsin passed a law in February barring food stamp recipients from owning cars that are worth more than $20,000. Our colleague Robert Samuels has a must-read dispatch from Milwaukee that features James Howlett, a homeless man who is worried about having to choose between food for his family and his only car. “The way things are changing in Wisconsin — and around much of the country — is that lawmakers are embracing increasingly aggressive measures to move the poor out of the social safety net and into the workforce,” Robert writes.

Wisconsin has been a leader with these kinds of initiatives. In 2013, Republican Gov. Scott Walker signed a bill requiring childless adults who are not disabled to work at least 20 hours a week to receive food stamps. As of February, parents of school-age children will also have to work at least 30 hours. Howlett, the man Robert interviewed, said he lost his job as a heavy machinery operator after an injury, then cut back hours as a Lyft driver after his car broke down -- and was later evicted. Howlett's not a fan of the new regulations around food stamps.

“They are trying to make people who don’t need government help feel good,” Howlett told Robert. “If you’re one of them, all of this stuff sounds good. But in reality, when you apply it, it doesn’t work.”

— Have you or someone you know waited too long for an organ transplant? Do you know someone who died while waiting for an organ? If so, The Post would love to hear from you. There are more than 114,000 people in the United States on a waiting list to receive an organ transplant — and some patients can wait years while their health deteriorates. Your stories can help us identify failures in the organ donation process nationwide, as well as in specific states or transplant centers.

Our colleagues Lenny Bernstein, Kayla Epstein and Kimberly Kindy have provided questions here for you to answer to the best of your knowledge. “We understand that you might not know every detail of the story, but any piece of information helps,” they write. “We would also appreciate your passing this questionnaire to people who have stories to share.”

— On that note, a few more good reads from The Post and beyond: 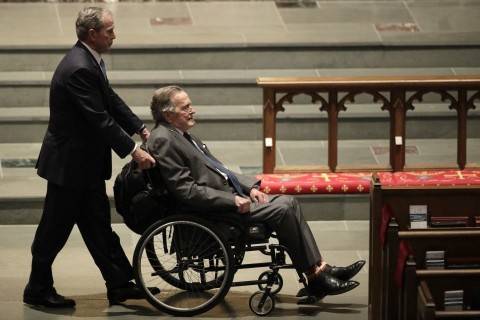 Politics
George H.W. Bush hospitalized one day after the funeral for his wife, Barbara
The former president, 93, was admitted to a Houston hospital on Sunday “after contracting an infection that spread to his blood,” his spokesman said.
Marwa Eltagouri 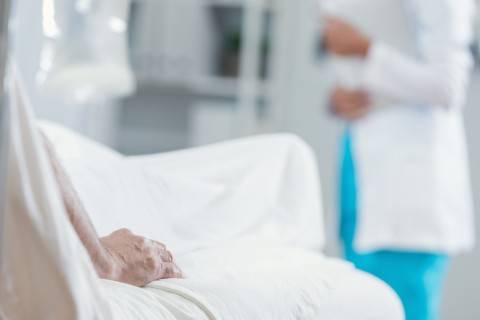 Thousands of organs are lost before they can be donated. Here’s how to save them.
Tens of thousands of viable organs are lost each year rather than going to patients desperately in need of them. Researchers recently estimated there are only half as many donors as there are deaths with potential to donate.
Vox 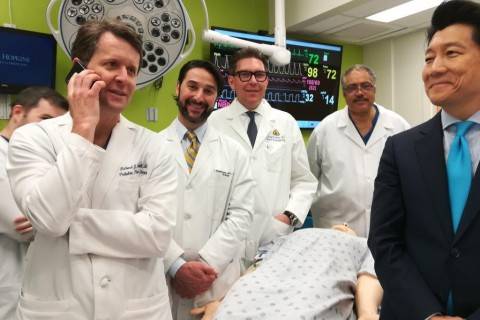 ‘Whole Again’: A Vet Maimed by an I.E.D. Receives a Transplanted Penis
A young soldier whose genitals were destroyed underwent extensive reconstructive surgery that doctors hope to offer to others who were wounded at war.
New York Times
AGENCY ALERT 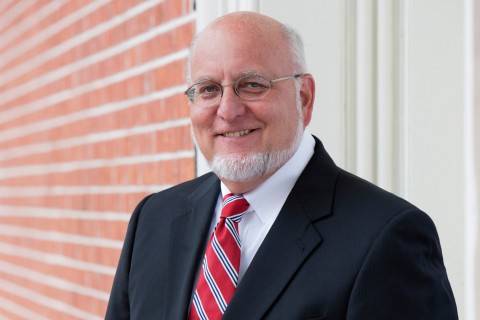 CDC chief makes $375K, far exceeding his predecessors' pay
The new head of the nation’s top public health agency is getting paid nearly twice what his predecessor made and far more than other past directors, government officials confirmed.
INDUSTRY RX 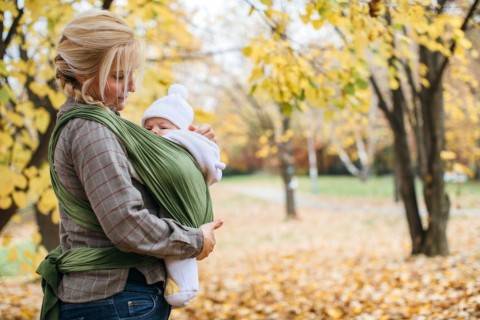 On Parenting
How one university is normalizing breast-feeding on campus — for students and employees
Southern Connecticut State University has been deemed a breast-feeding-friendly campus.
Sarah Bradley
REPRODUCTIVE WARS 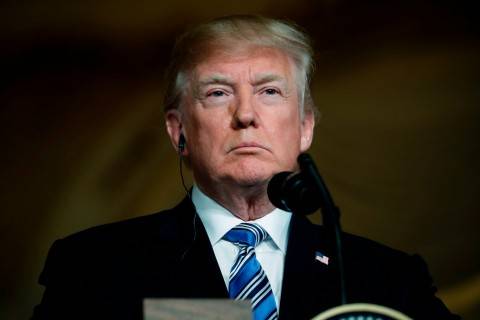 SUGAR RUSH
President Trump and French President Emmanuel Macron planted a tree on the South Lawn of the White House, a gift from the French first couple: