The Health 202: House Democrats must decide whether to work with GOP on drug prices Democrats celebrating their new-but-narrow House majority are confronting a hard decision: Whether to work with the Trump administration – and the GOP-led Senate – to lower drug costs.

House Republicans grappled with  exactly this kind of question for six years under then-President Obama, as the president and Democrats urged them to help improve the Affordable Care Act. Republicans refused to cooperate on bills that might have bettered its marketplaces and its other benefits, all because the law’s shortcomings were too good a political weapon with which to keep bludgeoning Democrats.

Democrats, who gained at least 26 seats in the House with a handful of races yet to be declared, could very well make a similar political calculation when it comes to drug prices under President Trump. The issue is a top concern to voters, and it’s likely to come up in 2020 when Democrats are seeking to defeat Trump to win the White House.

“They’ve got to make a decision, which is: How far are they willing to go to show they’re willing to work with Republicans and the Donald Trump administration?" Rodney Whitlock, a former health-policy staffer to Sen. Chuck Grassley (R-Iowa) and now a vice president at ML Strategies, told me.

Minority Leader Nancy Pelosi (D-Calif.), who is expected to reclaim the House speakership, has said going after the high cost of prescription drugs is a task Democrats plan to take on right away. In July, Pelosi personally visited the Pharmaceutical Research and Manufacturers of America to threaten some specific legislative actions, according to Stat News. Last night she told PBS’s Judy Woodruff it’s “hopefully something we can do in a bipartisan way.”

“I think that we could find common ground on reducing the of prescription drugs if the president is serious about his saying that he wants to do that,” Pelosi said, referring to the administration’s surprisingly bold proposal last month to lower the government’s spending on certain Medicare drugs administered in doctors offices.

But Pelosi, who has given little credit to the administration for the proposal, added a jab to Trump: “He has pulled his punch on it so far,” she said.

Pelosi was referring to a campaign promise by Trump to buck conservative norms and push for allowing Medicare to directly negotiate lower prices with pharmaceutical companies -- a policy with huge potential to move the needle on drug prices that would give the government much more influence over the industry. The president has since backed off that pledge as it’s an idea that alienates many in his own party.

Democrats are certainly poised for one type of action: Launching multiple investigations of Trump and scrutinizing his policies on immigration, education, Russia -- and health care, as my colleague Karoun Demirjian writes.

But if anything is to get done legislatively in the next two years on drug prices -- which are much higher in the U.S. than in other developed countries -- it would take House Democrats and Senate Republicans working in tandem with the administration, which has spent the last six months pushing drug costs as a top priority.

Any feasible, bipartisan legislation would likely take the shape of tweaks to Medicare or changes to the laws surrounding the rebates drugmakers give to pharmacy benefit managers, who are widely blamed for putting upwards pressure on list prices. Some House Democrats have introduced more aggressive bills aimed at the drug industry. Reps. Peter Welch (D-Vt.) and Lloyd Doggett (D-Tex.) have been especially active on the issue. So has Rep. Elijah Cummings (D-Md.), who is poised to become chairman of the House Oversight Committee. Cummings has proposed legislation allowing Americans to import drugs from Canada and permitting direct Medicare negotiations.

It’s an idea you’d expect Democrats to support since the Obama administration attempted something similar. But as we’ve noted, Pelosi and other leading Democrats expressed only tepid support, appearing unwilling to give any ground to the administration just weeks before the election. Now, on the other side of the midterms and with the House majority firmly in hand, Democrats will be seriously considering how to engage  onthe issue over the next two years.

Nonetheless, lobbyists are skeptical there will be much bipartisan action on drug prices. “Unlikely,” one GOP lobbyist wrote to me.

Other lobbyists pointed to Grassley – the most likely senator to assume chairmanship of the powerful Senate Finance Committee from retiring Sen. Orrin Hatch (R-Utah_ – and his longtime, bipartisan work on prescription drugs. A key architect of Medicare’s Part D prescription drug program, Grassley teamed up with Sen. Ron Wyden (D-Ore.) three years ago to investigate steep prices for the hepatitis C drug Solvadi.

One could imagine Grassley teaming up with Democratic colleagues on pharmaceutical legislation – assuming, that is, that either party is willing to take actions that would raise the powerful industry’s ire.

AHH: A Washington Post-Schar School survey of battleground districts on Election Day found health care and the president were the two top issues voters pointed to in House contests.

Other polls had similar findings. In an NBC News exit poll, 41 percent of voters said health care was the most important issue, replacing the economy, which NBC News noted had been the “top issue going back at least a decade.”

During a town hall for veterans, Congressman Dave Brat listens as veterans discuss their problems with medical care and dealing with the Veterans Administration. (Timothy C. Wright.)

OOF: At least one of the Republican lawmakers who played a critical role in passing the GOP’s unpopular Obamacare repeal-and-replace bill will soon be out of a job.

Rep. Dave Brat (R-Va.), , was defeated by Democrat and first-time candidate Abigail Spanberger, who said she decided to run for Brat’s seat the day that he and other Republican lawmakers voted to repeal the ACA. Brat is a member of the House Freedom Caucus, which as Paige wrote this week was were more worried about eliminating Obamacare requirements that maintaining its consumer protections during last year's repeal and replace debate.

Meanwhile, Rep. Tom MacArthur (R), who helped House Republicans compromise on a repeal bill by inserting language to weaken protections in the ACA for preexisting conditions, was up very slightly in his New Jersey race. It hasn't been called yet.

OUCH: Two critical Senate races and a governor's race where preexisting conditions protections were a signature issue fell different ways on Tuesday. In Missouri, Democratic Sen. Claire McCaskill was defeated by Republican challenger Josh Hawley. But in Wisconsin, Democratic Sen. Tammy Baldwin beat back a challenge from Leah Vukmir, winning a second term, even as the state's Gov. Scott Walker (R) fell in his bid for a third term.

McCaskill had repeatedly hammered Hawley for being one of the plaintiffs in a lawsuit brought by Republican attorneys general that seeks to overturn the ACA. She argued the lawsuit could eliminate the law's provisions that provide protections for people with preexisting illnesses. For his part, Hawley dismissed those attacks and has insisted that such protections can be maintained with an alternative to Obamacare.

And in Wisconsin, Walker was forced to answer for his state's participation in the Obamacare lawsuit, calling the claim by his opponent Tony Evers that he wanted to eliminate preexisting condition protections the “biggest lie of the campaign.” “No matter what happens in the courts or in the Congress, in Wisconsin we’ll codify that, the exact same language that’s in the [ACA],” Walker had said. “We’ll make sure everyone living with a preexisting condition is covered here in the state.” As our Post colleague James Hohmann reported, Gov.-elect Evers made health care a big issue on the campaign trail, campaigning last month with former HHS secretary Kathleen Sebelius.

— Here are other results from the midterms the health-care policy world is watching:

In this Tuesday, Oct. 2, 2018, file photo, a clerk reaches for a container of marijuana buds for a customer at Utopia Gardens, a medical marijuana dispensary, in Detroit. (AP Photo/Carlos Osorio File)

— Here’s where many of the health-care related ballot measures stand: — And here are a few more good reads From The Post and beyond: 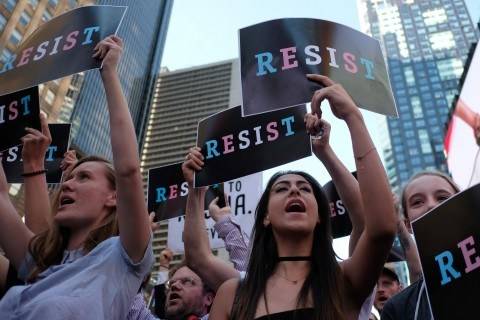 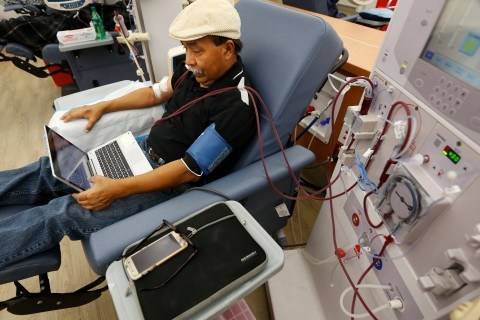 California voters reject ballot measure to cap dialysis company profits
Proposition 8, which would have imposed a cap on the profits earned by large dialysis companies such as DaVita, was defeated by voters on Tuesday.
Los Angeles Times
TRUMP TEMPERATURE 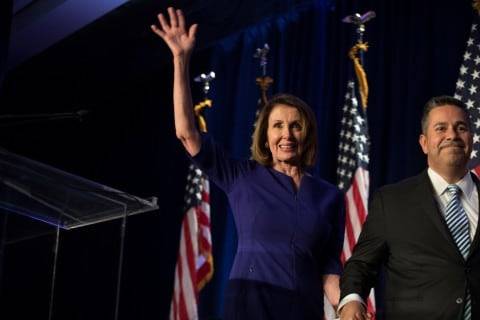 The Fix
Winners and losers from election night 2018
Democrats are on track to take the House, and Republicans will keep the Senate. And there was, and will be, plenty of shouting.
Aaron Blake 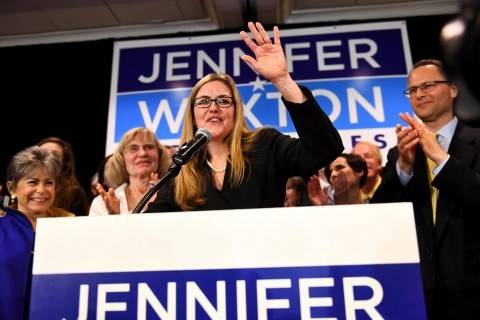 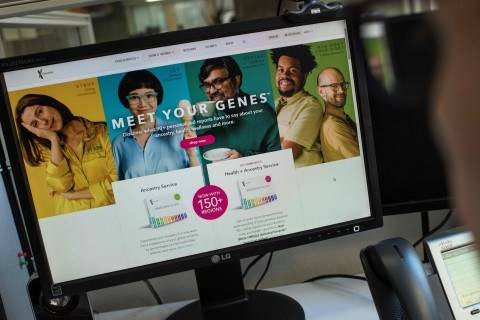 Life span has little to do with genes, analysis of ancestry database shows
The heritability of life span, long a hot research topic, is considerably less than widely thought, according to an analysis of millions of family trees.
Stat News 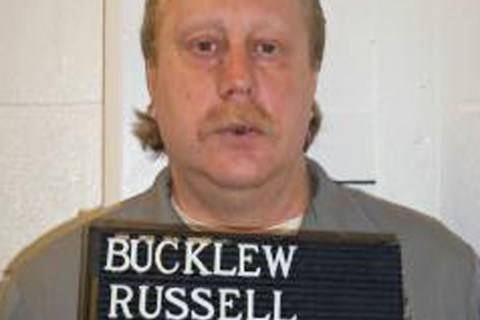 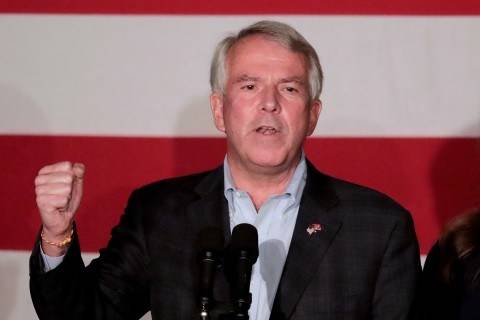 Bob Hugin reflects on his failed Senate bid — and the role pharma played
Bob Hugin, who lost his bid for New Jersey Senate on Tuesday, is the former CEO of Celgene, which has taken flak for hiking the prices of cancer drugs.
Stat News 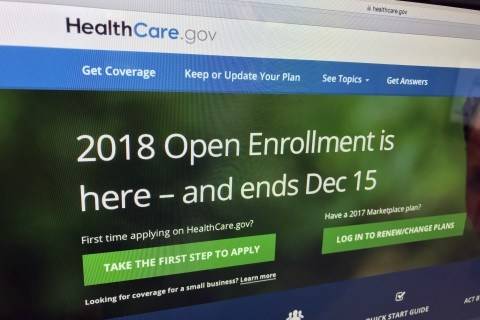 Redemption for Obamacare
Democrats' trek out of the health care wilderness was a long one, marked by a series of painful electoral losses.
Politico
REPRODUCTIVE WARS 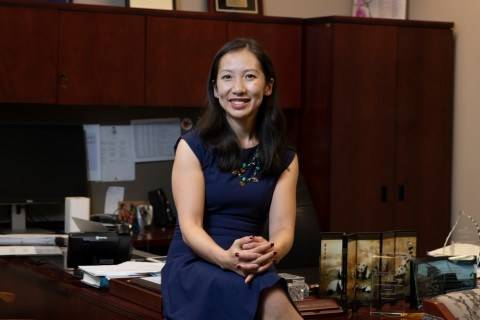 2018 midterm election: A night of firsts:

‘Colorado is a state that values diversity’: Rep. Jared Polis to be first openly gay governor