Here's the thing about making changes to the Senate filibuster rules: Both sides always threaten it and neither ever makes good on those threats. The so-called "nuclear option" is well named; the very threat of the damage it might do — to both sides —  has always served as an effective deterrent. 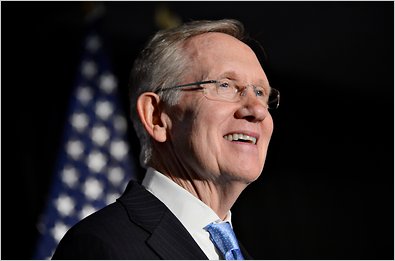 On "Meet the Press" Sunday, Senate Majority Leader Harry Reid (D-Nev.) sounded resolute about his plans to adjust the rules so that filibusters of Cabinet officials and federal agency appointees could be broken by a 51-vote majority.

"The changes we're making are very, very minimal," Reid insisted to "MTP" moderator David Gregory. "This is allowing the people of America to have a president who can have his team, to have his team in place. This is nothing like went on before."

In fact, Reid sounded as though he had already begun making the political argument to defend the changes. "Is there anyone out there in the world, the real world, that believes that what's going on in the Congress of the United States is good?" Reid asked Gregory. "Our approval rating is lower than North Korea's." (The Washington Post's Fact Checker explores Reid's claim in detail here and gives him four Pinocchios.)

Of course, part of the way to win in politics (like poker) is to bluff so convincingly that the other guy (or gal) falls for it — even though you really never were willing to go all the way in. So, is Reid bluffing?

No, according to one Reid insider. "In his heart, he's an institutionalist, but his caucus — and he — have reached a tipping point on executive nominees," the source explained. "If no deal, he'll do it."

The final chance for a deal will come Monday night when the full Senate gathers in the Old Senate Chamber in hopes of hashing one out.

Senate Minority Leader Mitch McConnell (R-Ky.), who has been in a war of words with Reid on the Senate floor over the past few weeks over the potential rule change, repeatedly offered that meeting as a last-ditch way out.

"We have an opportunity to pull back from the brink in this joint meeting that we're going to have of all senators in the Old Senate Chamber Monday night," McConnell told Gregory in an appearance that followed Reid's. (What we would have given for Reid and McConnell to have shared the same set for a joint interview.) "I hope we'll come to our senses and not change the core of the Senate."

The question for Reid is what happens if an accommodation acceptable to his caucus — which has been agitating for rule changes for the past several years — can't be reached. Does he go forward? Or does he find a semi-face-saving way to back away from the ledge?

"He's getting a lot of pressure from the caucus, outside groups and the White House to push this," said one source close to Reidworld.

We've written that the long-term view argues against changing the rules. But, Reid's own internal caucus politics may dictate that he go forward regardless of the danger he could be courting if Republicans take over the Senate in the 2014 midterms.

One thing is for certain: No one outside the two party bases and people in Washington care one whit about this issue. That lack of interest from the general public could be argued two ways. On the one hand, why expend energy on something that the public simply will not vote on in 2014? On the other, the fact that no one is paying attention lowers the potential penalties, politically speaking, for the change.

It all comes down to one simple question: Is Harry bluffing — or not? We'll find out in the next 48 hours.

The Justice Department said Sunday that officials are looking at whether there is enough evidence to pursue a civil rights case involving the shooting death of Trayvon Martin.

In a surprise blow to Senate Democrats, former Montana governor Brian Schweitzer (D) won't run for the Senate. Here's more on why it was an unexpected boost for Senate Republicans.

Texas Attorney General Greg Abbott (R) announced his candidacy for governor. Abbott is the overwhelming frontrunner in the race. His announcement came on the 29th anniversary of the accident that left him paralyzed from the waist down.

Reid said he was open to allowing a vote on a House bill that would ban abortions after the 20th week of pregnancy. He also said Obamacare "has been wonderful for America."

McConnell urged House Republicans to move ahead on immigration reform. Rep. Tom Cole (R-Okla.) said the Senate immigration bill likely wouldn't pass in the House if it was brought up for a vote.

“People who fall prey to hubris end up falling themselves. And this is something that I think infected me," Eliot Spitzer told Jay Leno on Friday.

A trial will begin Monday on the constitutionality of Pennsylvania’s voter ID law.