The Senate lost its last World War II veteran earlier this year when Sen. Frank Lautenberg (D-N.J.) passed away at the age of 89.

Lautenberg's death came as the ranks of veterans in Congress continue their long and slow decline.

Here's a look at how quickly the ranks of World War II veterans -- who as recently as 1985 comprised about one-third of Congress -- have declined as that population has aged.

Military service was once almost a prerequisite for service in Congress. Veterans comprised more than three-fourths of both the House and Senate at one point last century. Since then, their membership has declined to about 20 percent of both chambers.

But it's also worth noting that, in recent years, the decline in veteran representation has slowed somewhat, in part due to veterans of the Iraq and Afghanistan wars winning election to the House. Currently 16 veterans of those wars serve in the lower chamber, and Rep. Tom Cotton (R-Ark.) is trying to become the first senator from this group.

The number of veterans in the Senate actually increased following the 2010 election -- the first time that had happened since the early 1980s-- but then it continued its decline after 2012.

The 1970s remain the peak time for veterans in Congress -- the result of in influx in the number of veterans overall after World War II, Korea and the Vietnam war.

Just three decades prior, in the 1940s, veterans comprised less than half of Congress. 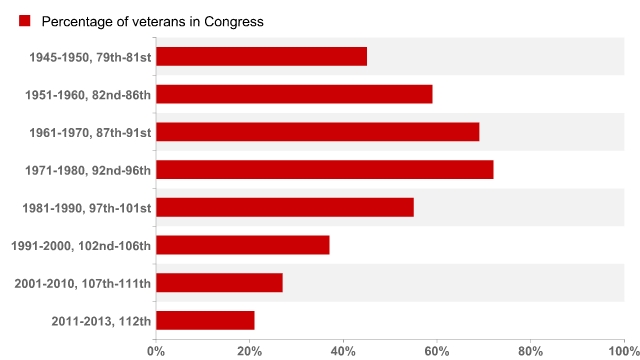 When veterans were more than three-fourths of Congress in the 1970s, they were less than 14 percent of the entire population. Today, the veteran population is about half that -- 7 percent -- but the number of veterans in Congress has fallen by about 75 percent.