This election is one for the ages, an epic upset that 100 years from now, we will all be discussing on our apparats. As always after big news events, I picked some of the best and worst of the just-concluded elections. My winners and losers are below. (And, no, this won't likely be my final word on the winners and the losers. Think of this as a first of a several part series.)

• President-elect Donald Trump: He was right. We — or at least most of us — were wrong. (More on that below.) Trump, from almost the second he entered the Republican primary race last June, had an intuitive sense of the state of the electorate. Trump understood their anger, their anxiety, their sense of alienation. He understood that what he said mattered less than how he said it. That his celebrity gave him both access to communities where other Republicans feared to tread and a different bar of what was acceptable from voters. He understood that his many controversial statements and, at times, outlandish policy proposals weren't really held against him by voters — they simply liked that he was willing to say stuff, even if they didn't agree with what that stuff was. He understood that there were a lot of “forgotten” people who were ignored not only by the elites and the establishment but also by polls.

You can like Trump or you can hate him. But it is indisputable that he got this election exactly right. Period.

• Reince Priebus: The Republican National Committee chairman took massive amounts of incoming — from Democrats and Republicans — for his unwavering support of Trump's candidacy. I wrote a few months ago that Priebus was being unfairly maligned, given that he really had no other options other than to steadfastly back Trump. But there were lots of members of his own party who were waiting with their knives out for Priebus, expecting that a Trump blowout loss would be the death knell of his chairmanship. Those knives are sheathed now. And Trump — to his credit — understood what Priebus had done for him, bringing the chairman onstage and asking him to say a few words to the adoring crowd. The cherry on top for Priebus? His home state of Wisconsin went for the Republican presidential nominee for the first time since Ronald Reagan in 1984.

• Sen. Roger Wicker (R-Miss.)/Ward Baker: Wicker was one of the lowest-profile chairmen of the Republican Senate campaign arm in modern memory. And Baker, the executive director of that committee, matched that low profile. The duo kept their heads down and worked like hell to keep expectations in check. After all, Republicans had to defend 24 of their own seats, including in Democratic-leaning states like Illinois, Wisconsin and Pennsylvania. And it was a presidential year — with an expected boost in Democratic turnout.

All of that makes what Wicker and Baker accomplished Tuesday night all the more amazing. Republicans lost just one seat — that of Sen. Mark Kirk (Ill.) — amid all that uncertainty and volatility. (A second seat in New Hampshire is teetering on the edge as of publishing this.) Reelecting Sens. Patrick J. Toomey in Pennsylvania and Ron Johnson in Wisconsin are remarkable feats; finding ways to get Sens. Roy Blunt of Missouri and Richard Burr of North Carolina over the finish line are equally amazing. And Wicker and Baker undoubtedly would also share the credit for their triumph with Sens. Rob Portman of Ohio and Marco Rubio of Florida, whose strong campaigns saved the committee millions of dollars. 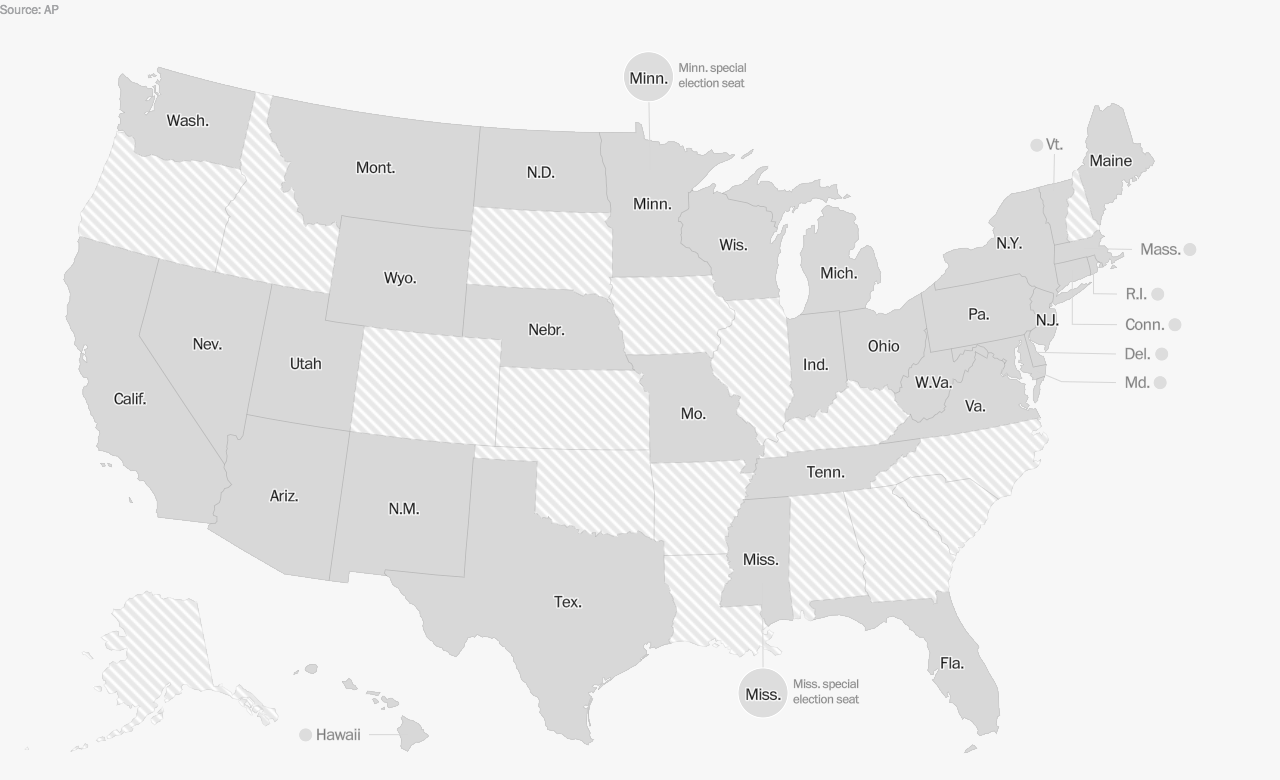 • Kellyanne Conway: Conway was a known commodity in the polling world before this race. But now she's a known commodity across the country and the world. Conway did what neither Corey Lewandowski nor Paul Manafort could; she managed to manage Donald Trump. She did so by using her own public megaphone — a near-constant TV presence and an active Twitter account — to encourage Trump's better angels, always pushing him to stay focused on issues and away from personal attacks. If you watched the campaign and the candidate, you know Conway didn't succeed all the time — or even most of the time. But she rode the wave and stuck the landing. She can write her own ticket for what she wants to do next — whether that's inside or outside the Trump White House.

• Allan Lichtman: There are very few people who can say, unimpeachably, that they called this election. Lichtman, a distinguished professor of history at American University, is one of them. Lichtman first came to our attention in May when he told The Fix's Peter Stevenson that his model — based on a set of 13 true/false statements — predicted a Trump victory. It was a model that had successfully predicted the winner of the presidential race in every election since 1984. We went back to Lichtman in October — amid dire poll numbers for Trump everywhere — to see whether he wanted to hedge his bet. He didn't. He doubled down, insisting that he trusted in the model. And, holy hell, he was right.

• Michelle Obama: The soon-to-be-former first lady may be the only Democrat who emerges from this dumpster fire of an election in good shape. She was the unquestioned star of the 2016 campaign, delivering the two best speeches (her convention speech and her speech condemning Trump's behavior toward women) anyone gave in the race. And now Michelle Obama will be the first name on the lips of many Democrats already preparing for the 2020 presidential race against Trump.

• Hillary Clinton: Twenty months ago, Clinton looked for all the world like a president-in-waiting. By dint of her polling numbers, her résumé, her fundraising capacity and her lack of a serious Democratic primary opponent, Clinton was rightly described as the biggest non-incumbent front-runner in modern political history. But the idea of Clinton the candidate never matched the reality of Clinton on the campaign trail. She underwhelmed repeatedly, running a too-cautious primary campaign that allowed a little-known Sen. Bernie Sanders to emerge as exactly what Clinton's campaign had hoped to avoid: a viable liberal challenger. Support for Clinton — even after she won the primary campaign — seemed obligatory rather than excited. The campaign she ran was ruthlessly efficient and organized. But what it never seemed to be was joyful or exuberant. It felt, to put a fine point on it, dutiful.

Clinton's message was in keeping with that duty-bound sensibility. The main reason she gave for people to vote for her was that, well, she was ready for it and the other guy wasn't. Clinton was never — in this campaign or in the 2008 race — able to show that she was something more than the hyper-prepared, supersmart, best student in the class. Remarkably, Clinton did show more of herself in her concession speech Wednesday morning, the latest example of politicians doing their best when they've lost something they wanted so badly.

But make no mistake: This was a colossal swing and miss for Clinton in a race that was widely seen as a hanging curveball for her and her party.

• President Obama: The outgoing president left no doubt that he saw his own legacy on the line in the 2016 election. He was an active and aggressive advocate for Clinton on the campaign trail, insisting that the progress he had made over these past eight years could be lost if Trump was elected. But for the third election in the past four, Obama was unable to transfer his popularity to his party. (Democrats suffered massive losses in the 2010 and 2014 midterm elections and now, this.) It remains to be seen whether Trump will make good on his promises to undo a number of Obama's signature accomplishments — the Iran nuclear deal, the Affordable Care Act, etc. That Trump was elected on a promise to, essentially, erase the record of the Obama administration speaks to how a majority of Americans may like Obama, but they're not too keen on his policies.

• Organization/Money/TV ads: By every traditional measure of campaign success, Clinton should have rolled to victory. She had a carefully built and well-staffed organization nationally. She raised more than $1 billion, dwarfing the amount Trump raked in. She used that financial edge to flood the TV airwaves in swing states with ads, many of which, again judged by traditional standards, were quite effective. This ad, in particular, should have been a showstopper for Clinton:

But Trump still won. And in winning he proved that his seemingly outlandish focus on his Twitter feed and his large-scale rallies was the right move for him. And that Clinton's focus on organization and money was, generally speaking, a waste of time. It remains to be seen whether Trump, thanks to his celebrity, is a one-off when it comes to ignoring the traditional measures of winning campaigns or whether things have been fundamentally altered on that front.

• The media: Look, there's just no way to sugarcoat it: Everyone — and I mean everyone — in the political press and punditry expected Clinton to win. She did not win. That is a failure on our part to properly understand what the electorate was telling us. What it is not is evidence of some sort of inherent liberal bias. As I noted above, every measure that history suggests is an effective indicator of how candidates win pointed to Clinton. As did the vast majority of national and swing state polling. As journalists, we rely on the past to teach us about the present (and the future). That approach normally works — until the past is no longer predictive of the present. The time has come to throw out all of our assumptions about how the American public sees itself and what it wants in its leaders. It's time to start anew.

• Evan Bayh/Sen. Charles E. Schumer (D-N.Y.): The former Indiana senator, who was recruited into the race by Schumer, was seen as a shoo-in when he decided, at the last minute, to get into the open-seat race left behind by retiring Sen. Daniel Coats (R). After all, he had served two terms in the Senate (he retired in 2010) had a golden last name (his father, Birch, is a political legend in the state) and had oodles of cash ($10 million) sitting in a campaign account just waiting to be spent. Turns out that Bayh was an opposition researcher's dream, most notably because he barely ever visited Indiana after he stopped representing the state in the Senate.

Bayh's defeat, announced early Tuesday evening, was a sign of things to come for Schumer, who had hoped to become Senate majority leader when the new Congress convenes in January. That dream will now have to wait for at least two years and maybe quite a bit longer; Democrats have to defend 25 seats, including five that sit in ruby-red states, in 2018.