Large-scale cuts to social safety net programs have emerged as one of the more controversial parts of the budget proposal the Trump administration released Wednesday, which Office of Management and Budget Director Mick Mulvaney called “a taxpayer first budget.”

Mulvaney argued in an op-ed that the cuts mark a shift from past budgets that “focused on how we can help Americans receive taxpayer-funded assistance” and previous administrations that “mistreated and disrespected those hard-working taxpayers.”

The argument suggests a transaction-based split of the country into hard-working taxpayers and nonworking beneficiaries of government assistance, with working people presumably supporting cuts to such programs that don’t benefit them. But how well does that picture match up to reality?

Late last year, the University of Maryland’s Program on Public Consultation conducted a nationwide survey measuring support for increasing SNAP benefits. The survey was atypical in providing respondents with a bipartisan-vetted briefing on the SNAP program and arguments for and against each proposal before measuring support.

About 8 in 10 registered voters (81 percent) supported raising SNAP benefits for the average recipient who has an income of $542 a month and now receives $140 in benefits, while 11 percent favored lowering benefits and 8 percent wanted to keep them the same. High-income voters were somewhat less supportive of increasing benefits, although a 71 percent majority of voters with household incomes of at least $100,000 favored increasing benefits in this scenario, compared with 81 percent among those with incomes below that level.

Those results are roughly in line with a more customary Quinnipiac University national poll from 2013 that found 66 percent of voters nationwide opposing cuts to food stamps given to low-income families, with opposition similar among voters with incomes of at least $100,000.

It’s worth noting that although the public resists general cuts to food stamps included in the Trump budget, most people support more targeted restrictions. The University of Maryland poll mentioned above found that 73 percent said people should not be allowed to use food stamps to buy sweetened soda, and 59 percent said cookies, cakes and doughnuts should be restricted.

Welfare and general aid to the poor

The recently released 2016 wave of the American National Election Studies survey asked respondents whether they wanted to increase, decrease or maintain funding for welfare programs, aid to the poor (in general) and child care, among other programs. The survey also asked about respondents’ current work status, making it possible to compare attitudes of Americans younger than 65 who are not currently employed with those who are working, and presumably paying federal income taxes.

On welfare, the poll found a sizable gap in support for cuts between working and nonworking people, with 50 percent of workers saying welfare funding should be decreased, compared with 34 percent of people who are not employed who said the same. Support for cutting “aid to the poor” generally was far less popular among both groups, with 19 percent of workers and 11 percent of non-workers saying such spending should be decreased. Decades-old political debates about welfare probably explain the gap between support for cutting aid to the poor and welfare, and also show how the public’s support for different aid programs can vary.

Despite differences in employment, partisanship plays a much stronger role in people’s support for aid to the poor. Looking only at working people (taxpayers), more than 7 in 10 Republicans say welfare funding should be cut compared with less than 3 in 10 Democrats. Likewise, working Republicans are more than three times as likely to support cutting aid to the poor in general (33 percent vs. 9 percent), although most in both groups say it should be kept the same or increased.

Rather than reflecting a rift between workers and non-workers, Republicans’ growing skepticism of social safety net programs may be the better explanation for the Trump budget’s push to curtail them. In 2012, the Pew Research Center found record low Republican support for three broad values underpinning the social safety net. 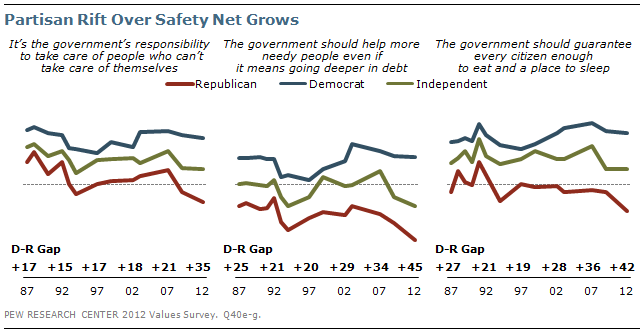 The Trump administration marks the first time since the shift in Republican attitudes that their party has held the White House, and after eight years of Barack Obama’s presidency, it’s understandable that the GOP would aim to alter the budget to reflect supporters’ growing skepticism of anti-poverty programs.

Yet just as Trump and Republicans gained united control of Congress and the White House, public opinion has shifted in a more liberal direction on a range of issues, including assistance to the poor. Separate Pew surveys found the share of Americans saying they want to increase assistance to the needy grew from 27 percent in 2013 to 45 percent in April. 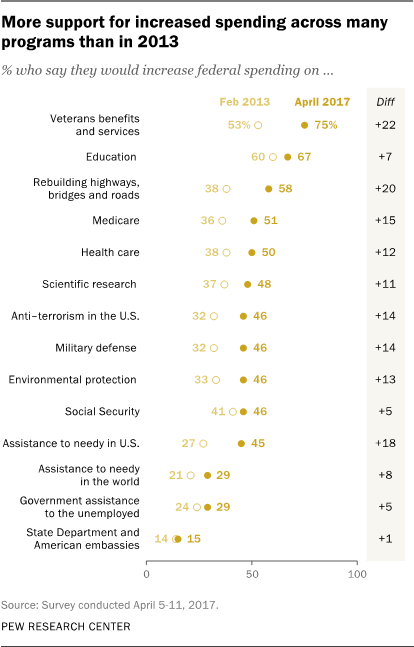 That shift, along with Trump’s overall unpopularity, make broad cuts to aid programs more difficult to defend to taxpayers and non-taxpayers alike.

Just in: ‘We’re not leaving until this is done,’ Biden tells Florida

7:01 PMThe latest: ‘Thanks to President Biden’ and administration for support, DeSantis says
6:32 PMThe latest: DeSantis greets Biden ahead of hurricane briefing
5:43 PMTake a look: Biden arrives in Florida, takes an aerial tour of damage
5:11 PMThe latest: IRS helping FEMA communicate with those affected by Ian
TOP STORIES
The Briefing
Don’t miss reporting and analysis from the Hill and the White House.
Biden is actually Greek. And Jewish. And raised by Puerto Ricans.
GOP leaders rally behind Walker. But in Georgia, Republicans fret.
What happens next with Herschel Walker
Try a different topic
Sign in or create a free account to save your preferences