On Monday, Rep. Mo Brooks (R-Ala.) cited his harrowing experience of witnessing last week’s shooting attack at a House Republican baseball practice to make the case that members of Congress should be allowed to carry concealed firearms anywhere in the United States.

When Del. Eleanor Holmes Norton (D-D.C.) accused the Republican of politicizing the shooting and attempting to interfere with local laws, Brooks’s response was blunt:

[GOP congressman wants his colleagues to be able to carry guns everywhere, including in D.C.

It’s impossible to tell whether Brooks is right. But a major new study of Americans’ opinions on guns finds that, perhaps surprisingly, people’s personal connections with gunshot victims have virtually no connection to their support for gun restrictions.

A Pew Research Center survey of nearly 4,000 Americans released Thursday found a substantial 44 percent of Americans saying they know someone who had been shot by a gun, either accidentally or intentionally. The survey also asked respondents their opinion on gun laws, with 52 percent of adults overall saying gun laws should be “more strict” than they are today, 18 percent “less strict” and 30 percent saying they are “about right.” (The report asked about a variety of specific restrictions and rules that ranged in popularity, but we'll focus on this summary question.)

How much are those experiences and attitudes connected? Pew Associate Director for Research Juliana Horowitz generously ran this breakdown for The Washington Post and found a striking similarity: 49 percent of people that know someone who had been shot said gun laws should be “more strict,” compared with 54 percent of those who do not have a personal connection with someone who was shot, a five-percentage-point gap, which is not statistically significant.

Pew found the same dynamic when separating out gun-owning households from those without a gun, a characteristic that has long been connected with support for gun restrictions. While people in households without a gun are 31 percentage points more likely to support stricter gun laws people in than gun-owning households, there were no significant differences within each group depending on whether they know a gunshot victim or not.

The effect of personal connections also pales in comparison to that of partisanship. About three-quarters of Democrats and Democratic-leaning independents support stricter gun laws -- while fewer than 3 in 10 Republicans and leaning Republicans do, regardless of whether they know someone who has been shot by a gun.

When it comes to support for gun restrictions, partisanship and gun ownership appear to overwhelm personal connections to gunshot victims.

This may not be that surprising, for two reasons. The first is that while gun owners cite personal protection as a central reason for doing so, a large portion of gun-related deaths are suicides. Suicides make up a majority of white gun deaths, while homicides make up a majority of African American gun deaths, according to analysis of federal data by The Post’s Dan Keating in 2013. As Keating found, many blame mental health problems for suicide deaths rather than availability of guns, thus knowing someone who committed suicide may not be seen as a reason for greater restrictions. 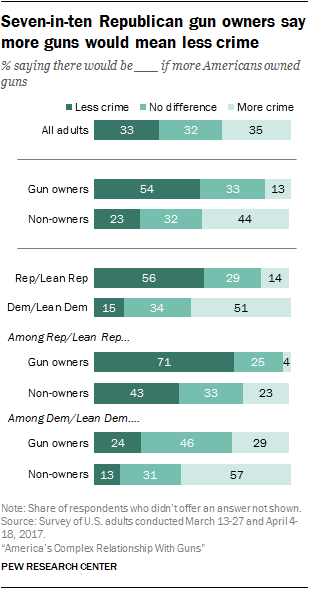 Americans’ experiences knowing a shooting victim are probably wide-ranging, and only some may share similarities to the shooting rampage House Republicans’ experienced in Alexandria, Va. But another question in Pew’s survey asked whether respondents or their family members had ever been threatened by a gun, perhaps tapping more into the type of experience Brooks said would change Norton’s opinion.

On this question, too, Pew found little connection between personal experiences and support for stricter gun laws.

The Pew Research survey was conducted March 13-27 and April 4-18 among 3,930 U.S. adults using a probability-based online panel, in which respondents were initially recruited through random digit dialing of cellular and landline telephones. The margin of sampling error for overall results is plus or minus 2.8 percentage points; the sample included 1,718 respondents who knew someone shot by a gun, and 2,202 respondents who did not, as well as at least 700 respondents in each of the categories reported above.