The Internet loves optical illusions. Why? Because the Internet is a network of bored cubicle-browsers in search of ways to pass the time.

Their latest fixation is an image dubbed “disappearing dots,” originally posted to Twitter on Sunday by game developer Will Kerslake. The illusion consists of a gray-and-white geometric pattern with 12 black dots superimposed at the intersections of some of its lines. Try as you might, you can’t see all of the dots at once — a bit of visual trickery that has prompted Twitter’s bored cubicle-browsers to retweet the image about 21,000 times.

Is this the single most important trick to going viral?

There are twelve black dots at the intersections in this image. Your brain won’t let you see them all at once. pic.twitter.com/ig6P980LOT

But how does disappearing dots compare with the year’s other viral illusions — of which we’ve had quite a few already? (I mean, it’s no ambiguous cylinders, but it certainly gives brick wall or camouflage phone a run for their respective moneys.) We’ve rounded up the most viral optical illusions of the year thus far, in all their mind-bendy glory. Some are good, some are merely mediocre — but all will improve a dull workday morning (!).

The artist Gergely Dudas posted this illustration of a field of snowmen in December, inviting users to find the panda hidden among them. About 180,000 people have shared it.

There's a panda amongst them! Can you find it? Original...

It looks like a big red circle … until you stare at it for a few minutes. Interestingly, whether you can see through this particular meme might indicate the health of your vision, or at least your color-sensitivity. (… not to get too serious about this or anything.) 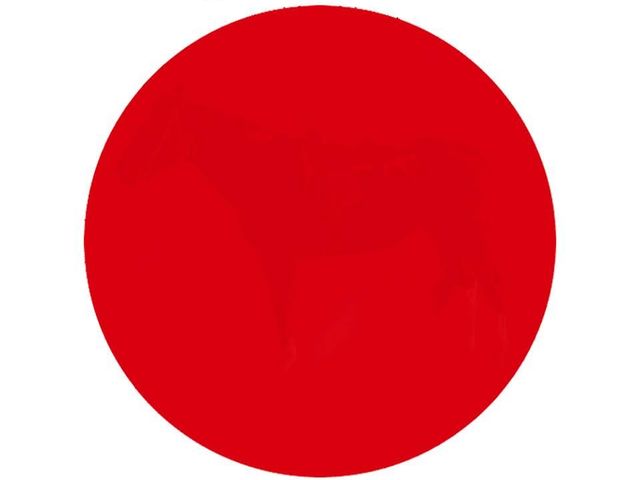 In April, a British Twitter user shared a confounding video of his son’s toy train tracks, which appeared to show one track growing and shrinking depending on where he placed it. This is called the Jastrow illusion and has to do with the way the brain interprets curved segments.

My toddler's train track is freaking me out right now. What is going on here?! pic.twitter.com/9o8bVWF5KO

This photo of a brick wall has been around since at least 2014, but Facebook users rediscovered it again this spring. There, some 60,000 people have shared “one of the best optical illusions Iv [sic] seen” — click through to read what they’re seeing.

This is one of the best optical illusions Iv seen. If you see it. Don't spoil it!!!!! Just like n share!!! Took me a good 5 minutes. 😆 Follow for the answer 😎 Snapchat : Azza-Bevo

More than 7.5 million people have viewed this Imgur image of a couple hugging — mostly because their legs look impossibly (painfully?) intertwined. As commenters eventually figured out, the illusion springs from the design on the man’s shorts. Wait for it…

This was the runner-up in the Neural Correlate Society’s Best Illusion of the Year Contest. (I know what you’re thinking: Who the heck won first?!) More than 10 million people have watched the confounding YouTube video and a series of explainers that break the illusion down — this one from YouTuber Devin Montes succinctly explains how it works.

In July, a Facebook user in the Philippines posted a photo of a floral carpet and challenged viewers to find the camouflaged phone placed on it. (That was shared more than 20,000 times, and liked by about 155,000.) A hint: The phone’s patterned case is very similar to that of the rug, but they don’t perfectly match up.

Since hindi ako makatulog, Let's play a game. Look for the cellphone.

Posted by Jeya May Cruz Estigoy on Saturday, July 2, 2016

… anyway, in light of all that competition, I’d give disappearing dots roughly an 8 out of 10. It’s not exactly a riveting image, after all, but there is real science behind it! As Kerslake later tweeted, his illustration is a take on the Hermann grid, a classical illusion that’s long been used to study the way the eye processes images.

You can read all about that here (click “view PDF”). Or, you know, you can squint a little — and just retweet it.

Liked that? Try these!