Jeff Bezos is buying The Washington Post. Here’s what you need to know about the sale.

As you might have noticed if you've read The Washington Post in the past 24 hours, the Graham family has sold us to Amazon founder and CEO Jeff Bezos. Here's what we know about the whole situation.

WELCOME TO THE BORG. (Paramount Pictures)

Nope. Amazon.com, the huge, publicly traded, Fortune/S&P 500 company, does not own The Washington Post or any of its affiliated publications. Bezos is buying us with his personal fortune rather than through Amazon.

So who owns who with the what now?

Cash money still the company and Weezy the boss. (AMC)

Was that a big expense for him?

Jeff Bezos is accustomed to throwing around fliff like a sultan. (Brad Neely / Creased Comics )

Not really. Bezos is worth around $25.2 billion, so The Post purchase set him back about 1 percent of his net worth.

That being said, if The Post runs losses, Bezos could end up covering them, meaning the expense of owning it would ratchet up considerably. That's tended to happen when eccentric rich people buy publications. Most famously, Marty Peretz's ownership of the New Republic proved a very effective way of evaporating his fortune, as he had to cover losses of around $3 million a year.

What's included in that purchase? 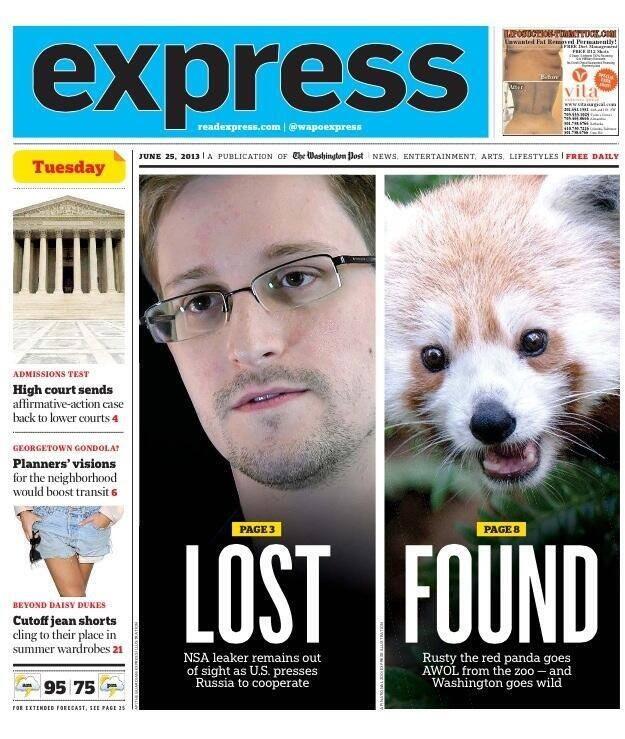 The geniuses at Express who dreamed up this cover are still with us.

The package being sold to Bezos includes The Washington Post's online and print editions, our daily free paper Express, the weekly Spanish-language paper El Tiempo Latino, the Gazette community papers in Maryland, and some specialty publications like New Homes Guide and Apartment Showcase.

What's not included in that purchase?

Everything else the Washington Post Co. owns isn't part of the deal, including the Slate Group (including Slate and The Root), Foreign Policy magazine, The Post's group of local TV stations, StudentAdvisor, SocialCode and the Kaplan for-profit college/test-prep company.

Also we apparently own a cable company, a boiler company and a hospice company, which aren't included. So we can't help you with end-of-life care anymore.

The Washington Post's physical building, which is on the market, isn't included in the sale.

Is the Washington Post Company still going to be called that?

One possible name for the new Washington Post Company. (Netflix)

Nope. Reflecting their new Slate-plus-Kaplan-plus-boilers-plus-death business model, they're getting a new name. What name that is has yet to be determined.

Were the Grahams looking for a buyer or did this come out of nowhere?

The Post's leadership, in particular Post Company CEO Donald Graham, was actively courting buyers, and hired the investment bank Allen & Co., the same firm that managed the sale of Newsweek, to help it do so.

Is it changing leadership?

Not immediately. Katherine Weymouth is staying on as publisher for the time being, and Graham is staying at the helm of the now smaller Washington Post Co. Marty Baron is staying on as the paper's editor and no layoffs are planned — at least as far as we know.

How does $250 million stack up to other recent media purchases?

Arianna Huffington got $315 million for her eponymous Post, which AOL apparently still had lying around in 2011. (Daniel Acker/Bloomberg News)

Well, it's a great deal more than $70 million, which is what the Boston Globe sold for the other day, and a bit less than $315 million, which is what AOL bought the Huffington Post for in 2011. Then again, the deal doesn't include our physical headquarters, which the D.C. government assesses as being worth $80 million.

The newspapers owned by the Tribune Company — which include the Los Angeles Times, Chicago Tribune, Baltimore Sun, and Hartford Courant — were valued at $623 million by Lazard last year. The New York Times has a market capitalization of about $1.8 billion.

The Washington Post Co. itself made a profit of $44.7 million last quarter, but the results vary considerably depending on what part of the company you're looking at. The newspaper division, which includes both the businesses that Bezos is buying as well and other properties like Slate, lost $14.8 million last quarter, though $16.8 million in expenses are due to pensions, which are fully funded and thus don't cut into the company's cash revenue.

Does Bezos own other businesses outright?

Yes. The best-known is probably Blue Origin, his private space company, which is working on a manned, Vertical Takeoff/Verticle Landing rocket for suborbital travel called New Shepard. It's pretty cool, if we do say so ourselves. Here's a test video from November 2011, showing its vertical landing capabilities:

And here's one from this past October, showcasing its launch escape system, in case something goes awry:

In other words, please take us on your space plane, Jeff Bezos.

What other stuff has Bezos invested in?

He also invested in Pets.com but let's all try to forget about that one. (Pets.com)

Besides Nash Holdings and Blue Origin, Bezos also owns an investment company, Bezos Expeditions. That's invested in startups like Business Insider, Twitter, Linden Labs (the creators of Second Life), 37Signals (which produced Ruby on Rails), and Airbnb. But it's also done stuff like recover an engine from the Apollo 11 mission from the bottom of the ocean:

He's also invested in the 10,000 Year Clock Project, which aims to build a mechanical clock that can keep time accurately for ten millennia. The clock was designed by Thinking Machines founder Danny Hillis, and its construction has been spearheaded by the Long Now Foundation, an organization started by Hillis and Stewart Brand (the creator of the Whole Earth Catalog), and named by the musician Brian Eno. The first clock is being built on land in West Texas that Bezos owns, with at least $42 million of his money:

What are Bezos's politics?

Bezos and his wife MacKenzie wanted their LGBT friends to be able to get married too. So they wrote a $2.5 million check. (Matthew Staver/Bloomberg News)

Like many tech entrepreneurs, Bezos is a libertarian, with laissez-faire views on both social and economic issues. He donated $2.5 million to a successful referendum effort to legalize same-sex marriage in Washington state in 2012, and gave $100,000 to oppose a referendum in 2010 that would have established a tax on income above $200,000 (Washington currently doesn't have any individual income tax). He has donated to the Reason Foundation, which publishes the libertarian periodical Reason.

Dave Weigel at Slate notes that he's donated to both Republicans and Democrats, often in a transactional-seeming way. He gave to Slade Gorton, the Republican senator from Washington State, in his 2000 reelection bid, and gave to Maria Cantwell, who defeated Gorton that year, shortly thereafter. Apart from stuff like the Clock of the Long Now (see above), Bezos has given to the Museum of History & Industry in Seattle, helped create a neuroscience center at Princeton, his alma mater, and started the Bezos Family Foundation, which runs programs for students like a scholarship to attend the Aspen Ideas Festival and Students Rebuild, a group encouraging global student activism. He's also donated to various early childhood education charities and to various parts of the education reform movement, including the KIPP and Uncommon Schools networks of charter schools and Teach for America.

This dude doesn't get a union. (Ross D. Franklin/AP)

That's a lot less than, say, Google (which spent $29 million last session) but still a fair bit. That lobbying includes work on online sales taxes, which Amazon has long opposed but has started backing at the federal level, as a harmonization measure between state policies, as well as on corporate tax reform and Internet regulation, where it's teamed up with Google, Facebook and Yahoo to form the Internet Association.

Amazon has taken a $600 million contract from the CIA to help it with its cloud computing needs; Amazon's EC2 platform is among the most widely used platform-as-a-service (PaaS) systems that other companies use to power their Web applications, so it's not surprising that the CIA would reach out. The company has also been clashing with German unions lately, due in large part to an internal aversion to organizing, driven by the belief that unions stifle the kind of speedy innovation that has made Amazon what it is today.

"So we're going to widen the paper until each sheet is this wide. It'll be pretty hard to read" — is not what Bezos is saying here. (David McNew/Getty Images)

We don't know more than he said in his letter to staff, which you can read here.

Update: The original version of this article said Explore Holdings LLC, one of Bezos's investment firms, was buying the post. A new firm, Nash Holdings, is doing that; Explore just acted as guarantor.