A growing branch of empirical health economics combines data and rigorous econometric method to tease out the impact of diffuse but important environmental hazards on human health. In recent years, brilliant papers have appeared to examine the health impact of particulate pollution, nuclear accidents, and legal changes such as the Civil Rights Act of 1964. A terrific recent NBER working paper by Sandra Black, Aline Bütikofer, Paul J. Devereux, and Kjell G. Salvanes deserves to join that group.

These authors examined the serious harms inflicted on Norwegian pregnant women (and ultimately on Norwegian children) by Soviet nuclear testing in the late 1950s and early 1960s. As an added bonus, their paper provides further posthumous vindication — as if this were needed — of the great Russian physicist Andrei Sakharov.

Most of my students were born after the fall of the Berlin Wall. Many don’t know who Sakharov really was. That’s too bad. If one had to make a list of the greatest human beings of the last century, Sakharov would be close to the top of any reasonable list. Father of the Soviet hydrogen bomb, he became first among equals among the dissidents courageously fighting for human rights and liberal values in the former Soviet Union.

If one had to identify a single year when Sakharov moved from pampered and compliant technocrat, three-time hero of Socialist Labor, to active dissident, 1962 would probably be that year. It was then that Sakharov waged a lonely, unsuccessful fight to prevent redundant tests of Soviet nuclear bombs. Four years before, Sakharov had published one of the first studies seeking to forecast the contributions of nuclear weapons testing to human cancers.

Analyzing the diffusion of radioactive carbon, Sakharov forecast that the explosion of a one-megaton hydrogen bomb -- equivalent in destructive power to 1 million tons of TNT -- would cost more than 6,000 lives. These lives would be lost over many generations. These deaths would be hard to distinguish from the much larger number of unrelated fatal cancers. They would be no less important in the lives of real people.

At the time, the Soviet Union sought to demonstrate its resolve by exploding huge, militarily irrelevant hydrogen bombs. The largest of these explosions exceeded 50 megatons. According to Sakharov’s calculations, each such explosion would ultimately take hundreds of thousands of lives. He was a loyal Soviet citizen who believed that his country needed powerful weapons to deter western powers. He wanted this work conducted in safety, with restraint. He subsequently used his scientific influence to support a nuclear test ban, too.

Like the United States, the Soviet Union established two main labs designing these weapons. Inevitably, the two labs developed rather similar prototypes of a new bomb. Bureaucratic rivalry produced the predictable result: Each lab sought to explode its own bomb, although the resulting redundancy would expose millions of people to additional toxic fallout in return for very little military or scientific gain.

Sakharov frantically tried to stop one of the blasts -- either one, he didn’t ultimately care. He appealed all the way up the chain to the leader of the Soviet Union, Nikita Khrushchev. Khrushchev frankly rebuffed Sakharov, sending a clear message that scientists should not meddle in larger policy matters. After the second explosion, Sakharov exclaimed, "A terrible crime had been committed, and I couldn't prevent it…. I dropped my face on the table and wept." (quote from Gennady Gorelik, "The World of Andrei Sakharov: A Russian Physicist's Path to Freedom," p. 288.)


The physicist’s anger and disappointment changed him. He began the journey from compliant technocrat to something more skeptical, to internal dissenter, and, eventually, to a political adversary of the Soviet regime.

Sakharov’s 1958 paper examined cancer. Black and her colleagues examined different consequences of nuclear testing that are scarcely less profound: The impact on Norwegian children of prenatal exposure to the fallout created by the frequent Soviet nuclear tests in the 1950s and early 1960s. Their specific findings are of interest. So is their clever and intricate study design.

Snippy ethics committees don’t allow researchers to conduct randomized human trials of nuclear fallout exposure. Black and colleagues did the next best thing. They exploited variations over time and space that led different pregnant women to receive different radioactive exposures depending rather randomly on where they live, the happenstance timing of nuclear tests, and local weather patterns. As the authors note:

The western Norwegian coast line was particularly exposed to atomic fallout coming from nuclear testing taking place in Novaya Zemlya in the Russian arctic archipelago, one of the most intense test regions between 1955 and 1962.
The fallout varies significantly by municipality and also over time. There was an international moratorium on nuclear testing from November 1958 to September 1961 so Norway received almost no fallout in the second half of 1959, in 1960, and throughout most of 1961. The partial test ban treaty in October 1963 led to very little fallout in 1964 or in subsequent years. However, there is significant fallout in 1957 and 1958 and, even more so, in 1962 and 1963 because the explosions after the expiration of the moratorium were much larger than before.

The figures below (reproduced by permission) illustrates the pattern. 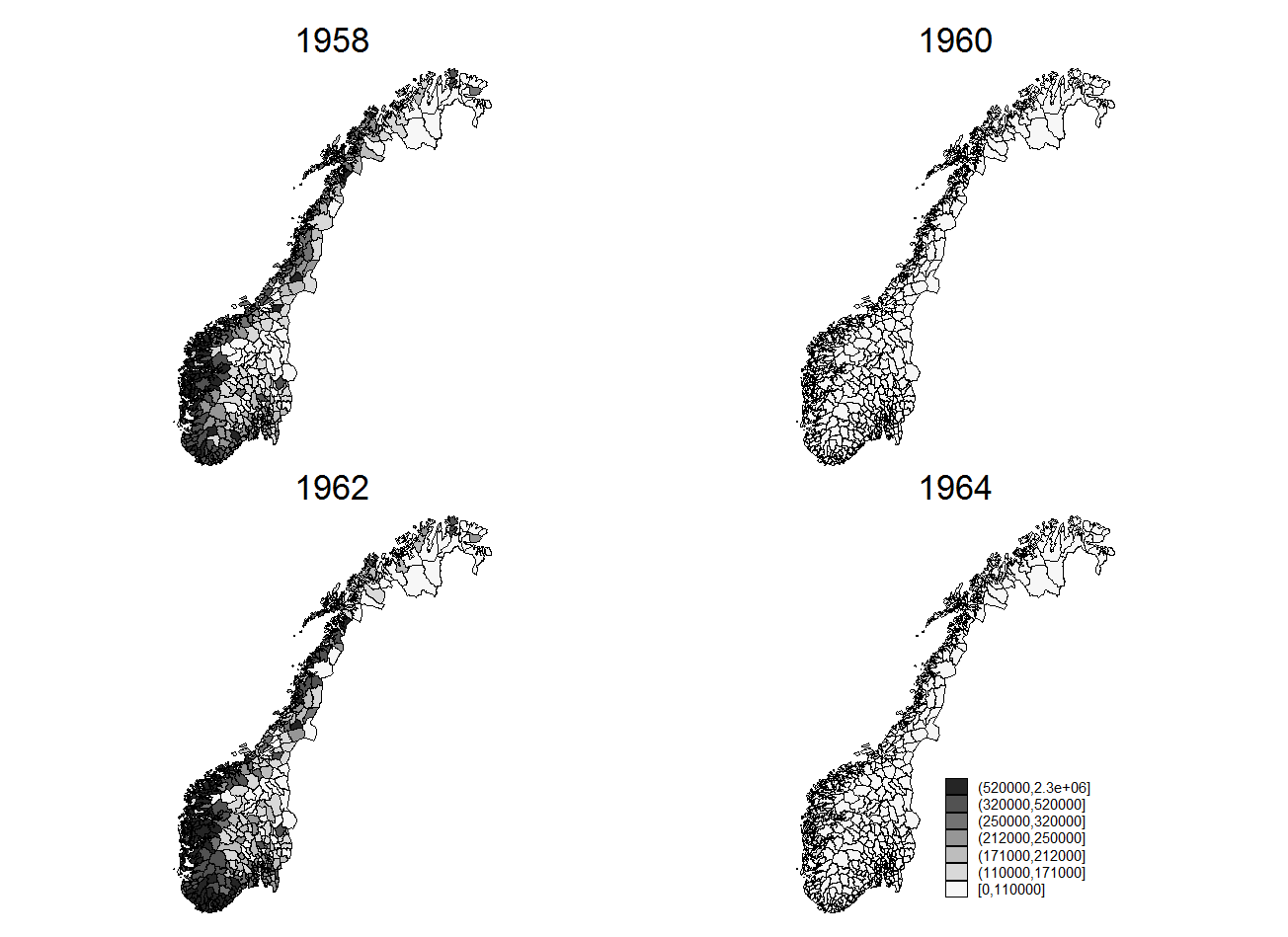 Norway also kept amazingly accurate records. Between 1956 and 1984, the Norwegian military carefully monitored radioactivity in the air, in rain and snow, and on the ground on a daily basis at 13 stations across the country.

The authors cite estimates that Norwegians in the hardest-hit areas were exposed to an annual radiation dose equivalent to about twice the dose one would receive from a whole-body computed tomography (CT) scan, and about 60 times the external dose from an X-ray mammogram. That’s not homicidal, but it is harmful. We don't routinely subject pregnant women to such things.

Meanwhile, a kind of linked super-census called the Norwegian Registry included data on citizens’ educational attainment, personal and family characteristics, employment, and earnings. Focusing on people born between 1956 and 1966, the authors identified the period of time in which each individual was in months three and four in-utero. Because Norwegian men had universal military service, the authors could obtain additional information on boys’ subsequent IQ score, psychological data, and height on service entry.

Given the availability of such data, the statistical analysis is pretty simple. The authors try various approaches, including to compare outcomes among siblings, one of whom was likely exposed to some form of fallout in utero and one was not.

Here’s what they found. Exposure to nuclear radiation during months three and four of pregnancy was associated with reduced educational attainment, high school completion, and adult earnings. Such exposures were also associated with reduced IQ scores among boys at 18 years of age. A one standard deviation increase in ground exposure reduced high school completion by about 1 percentage-point among men, and by about 2 percentage points among women.

I should mention that American and European atmospheric, ground, and underwater tests brought their own harms and environmental damage. The United States’s 15-megaton Castle Bravo was perhaps the most famous, inducing sometimes-fatal radiation sickness among Japanese fishermen and Pacific islanders.

The average effects found by Black and her colleagues don’t seem very large from the perspective of any single individual. These are more sobering when you consider that swathes of an entire country were exposed to toxic fallout over nearly a decade. Norway experienced 635,050 live births from 1956 to 1965. Radioactive fallout affected many of these children. The human health consequences remain with us. And of course the health consequences of these explosions (and everything in the production process leading up to them) were surely greater in the old Soviet Union.

Toxic plumes created 50 or 60 years ago still cast long shadows on human lives. We can’t change that. We can investigate what actually happened. We can also learn from the examples of Sakharov and others, who resisted normal bureaucratic pressures and professional incentives and remained willing to speak out. That wasn’t easy in 1962. It’s not so easy in 2013, either.