Are cows better represented in the Senate than people?

I recently stumbled upon a factoid that was news to me: The United States has nine states that are inhabited by more cows than people. Here’s one example: 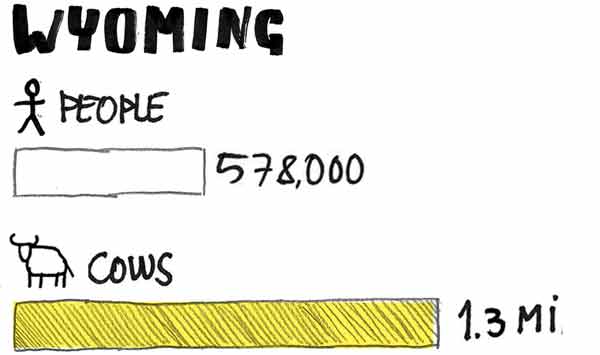 This bit of information would have passed unnoticed if I hadn’t come across it just as the president was about to face trial in the Senate. As fact and factoid mingled in my brain, an intriguing question emerged: Are cows better represented than people in the Senate?

I decided to check. The Constitution stipulates that each state is represented by two senators, regardless of population. If we add the population of the nine states that have more cows than people and compare that with California, this is what it looks like: 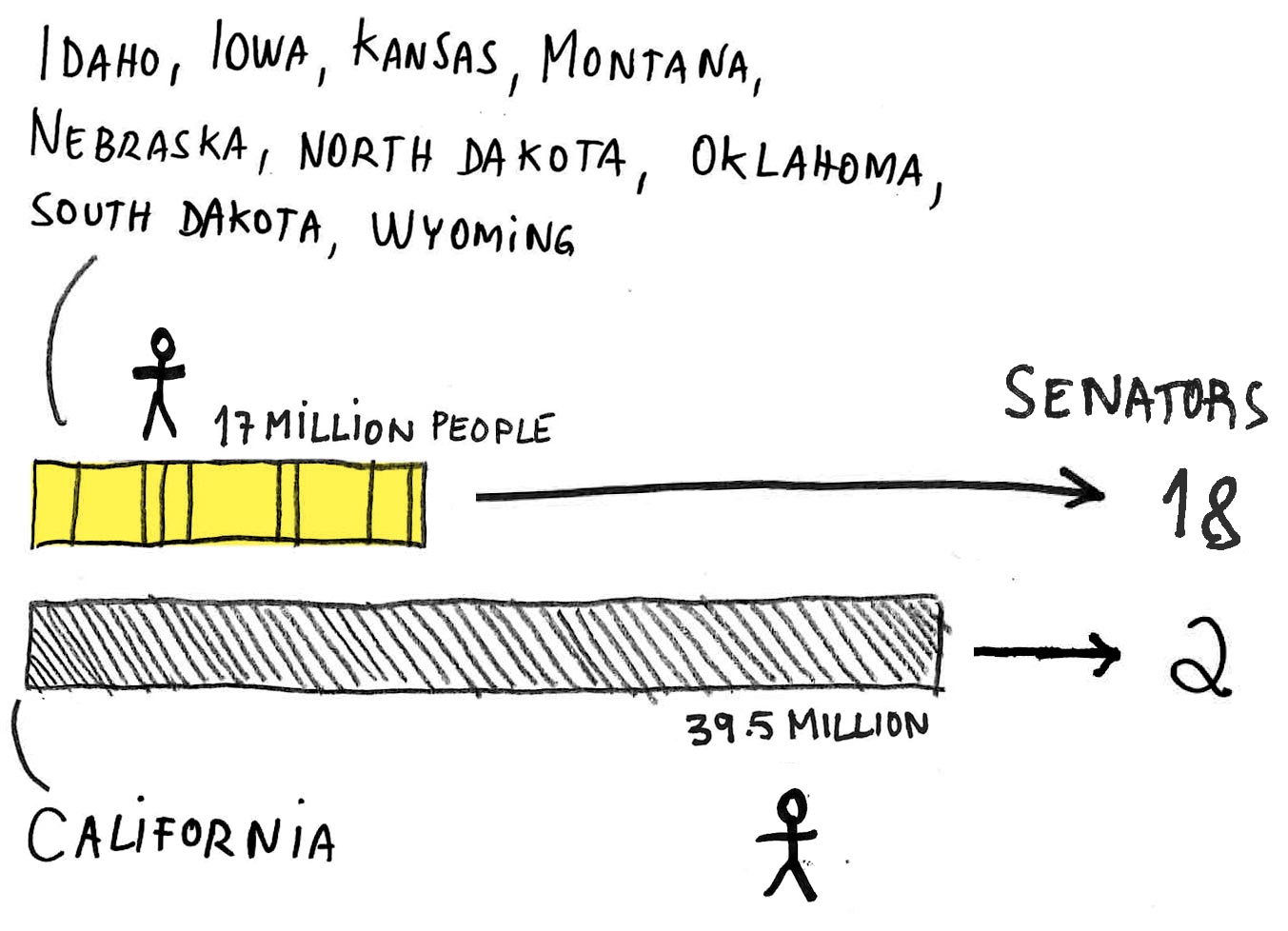 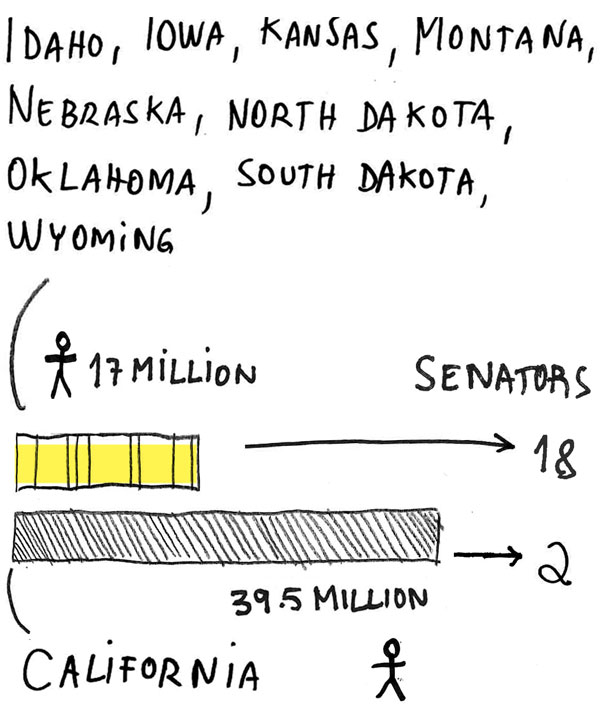 That seems out of balance. Unless, of course, Senate representation is secretly based on the number of cows, not on people. Consider this: 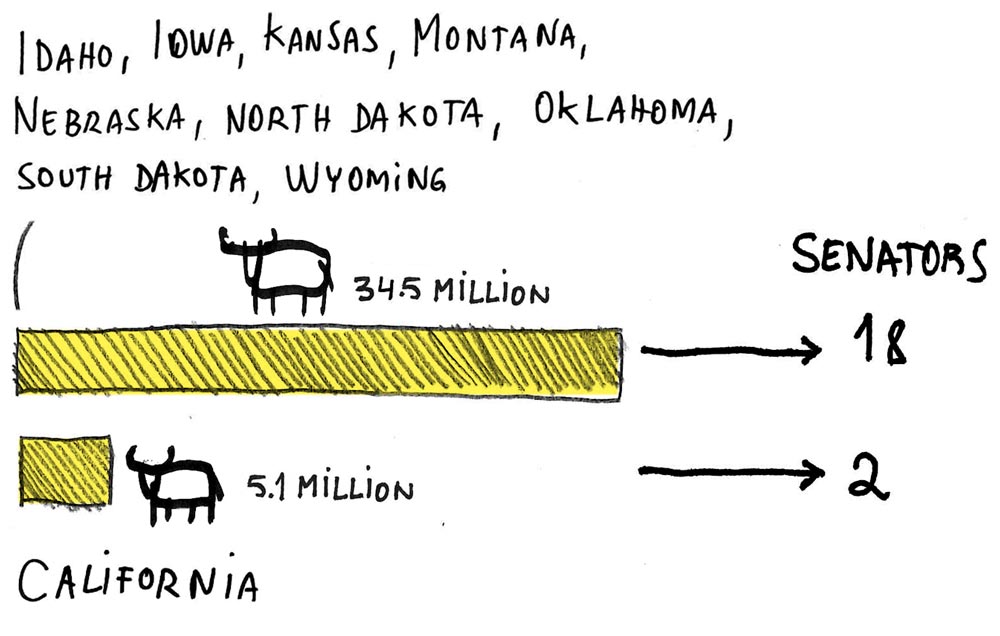 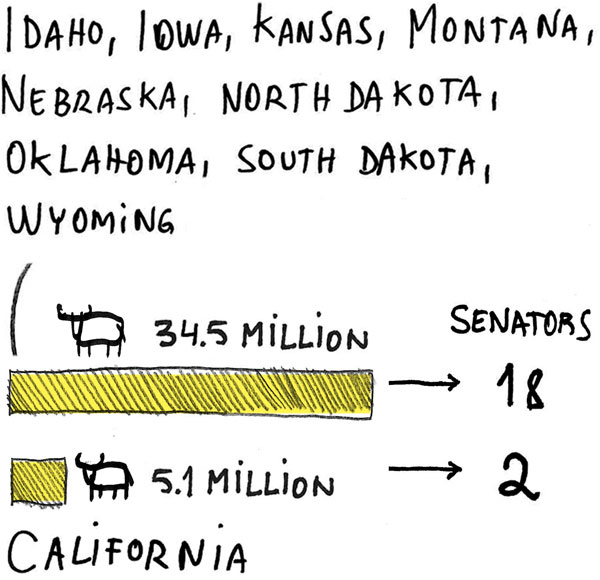 The outsize influence of low-population states in the Senate becomes an issue every time Congress needs to make a very important call — such as deciding if the president should keep his job.

How big is the problem? Here are all the states ordered and sized from most to least represented in the Senate in relation to their population: 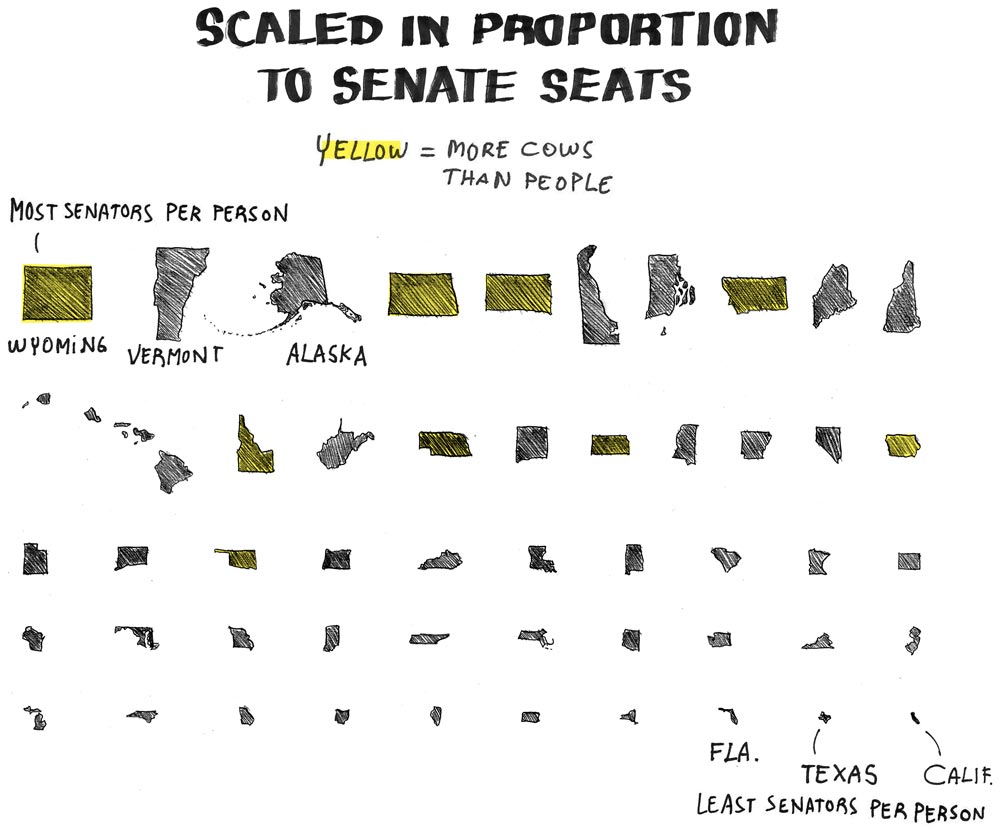 As you see, it is not just those nine cow-dense states that stick out. So, to put things on a better perspective, let’s look at the 20 states with the least population. Together, these states are home to about 33.5 million people — they hold about 10 percent of the American population and 40 percent of the senators.

By focusing on the 20 states with the lowest population, we finally get the answer to our initial question — cows are indeed better represented than people in the Senate: 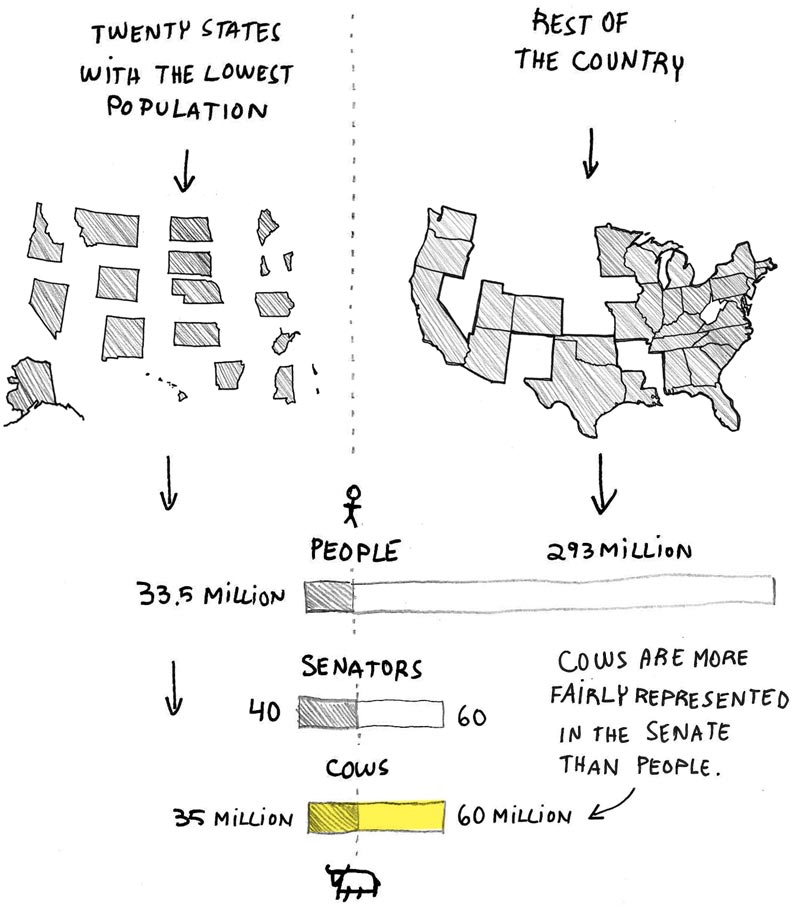 It might seem that changing Senate representation to a system that is proportional to the population would radically change the division of power between Republicans and Democrats. In fact, it would not. Here’s a calculation based on the number of seats each party holds today and the population of the states each senator represents: 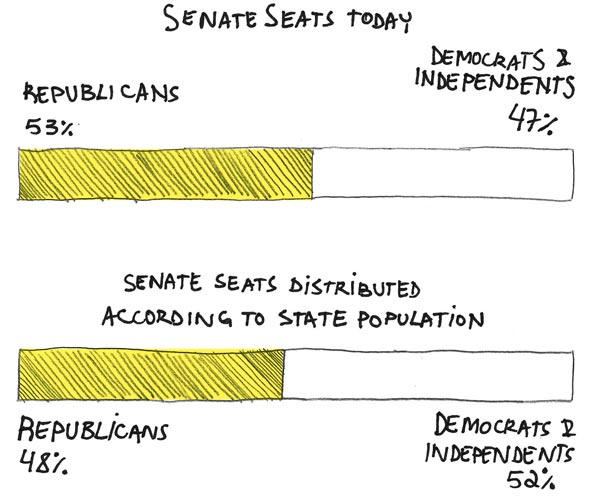 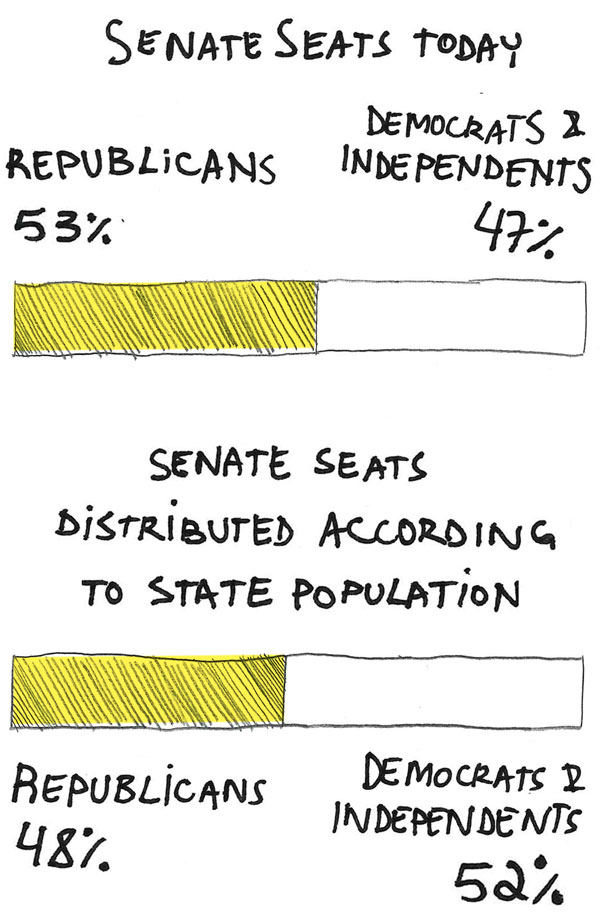 Therefore, proportional representation would not be enough for Democrats to single-handedly remove the president from office. It would just be equally unfair to everyone.

I wonder how different things would be if cows could vote. 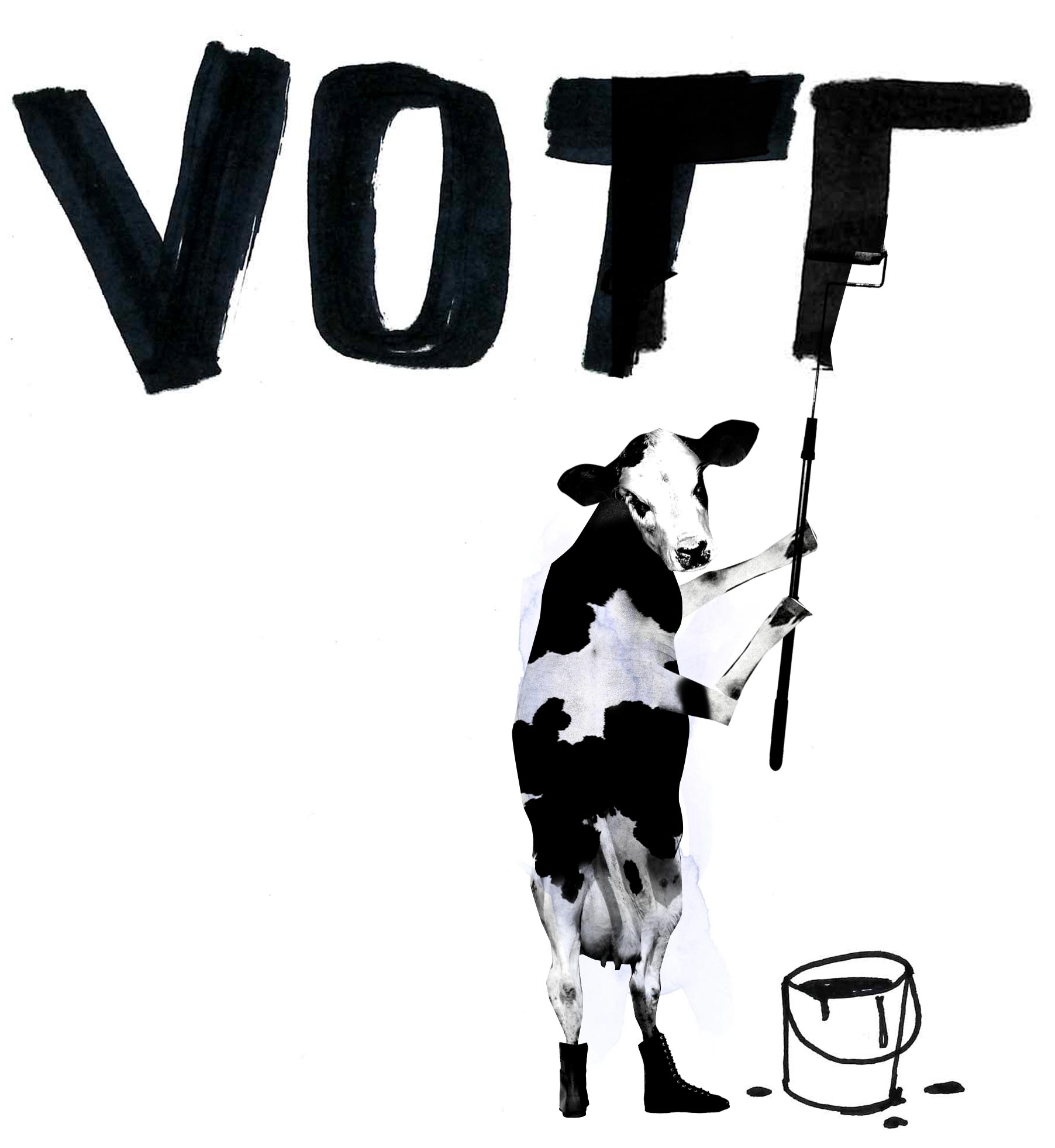 Greg Sargent: How GOP senators are already pre-spinning their coverup for Trump

Jonathan Turley: The impeachment trial will be a test of a knotty problem in the law

Jennifer Rubin: Nancy Pelosi may yet have the last laugh