Hugh Hewitt: “Is there any doubt in your mind, Senator Cotton, that this was planned long before it was unveiled? And by that, I mean the leak of Dr. Ford’s letter. I don’t know who did it, but I believe it was part of a campaign that was set up to occur exactly when it did. Do you agree with me?”

Sen. Tom Cotton (R-Ark.): “Hugh, I believe the Schumer political operation was behind this from the very beginning. We learned last week that a woman named Monica McLean was Ms. Ford’s roommate, and she was one of the so-called beach friends who encouraged Ms. Ford to go to Dianne Feinstein and the partisan Democrats on the Judiciary Committee. Well, it just turns out, it just so happens that Monica McLean worked for a Preet Bharara, the former U.S. attorney in Manhattan, now a virulent anti-Trump critic on television and former counsel to Chuck Schumer. So I strongly suspect that Chuck Schumer’s political operation knew about Ms. Ford’s allegations as far back as July and manipulated the process all along to include taking advantage of Ms. Ford’s confidences.”

Christine Blasey Ford said she decided to come forward with an allegation that Brett M. Kavanaugh sexually assaulted her in 1982 only after a confidential letter she sent to her congresswoman leaked this year.

“I am no one’s pawn,” Ford testified before the Senate Judiciary Committee on Sept. 27.

President Trump at first called Ford’s testimony credible. But once the Senate confirmed Kavanaugh to the Supreme Court, the president called the whole thing a “a hoax that was set up by the Democrats using the Democrats’ lawyers.”

The next morning, Cotton was on the radio connecting the dots. The senator theorized that Democrats led by Senate Minority Leader Charles E. Schumer (D-N.Y.) leaked Ford’s confidential letter near the end of the confirmation process in a bid to derail Kavanaugh.

How does he figure? Well, one of Ford’s former roommates had encouraged her to come forward, and this roommate once worked for Bharara, who once worked for Schumer, so there you have it.

It’s not clear what evidence Cotton is relying on to get from Point A (all these people know each other!) to Point B (all these people were secretly in cahoots!). Regardless, the former roommate in question, Monica McLean, never worked for Bharara. So this theory falls apart pretty quickly, relying as it does on a false premise sprinkled with suppositions on top.

Ford, a research psychologist, in July sent a confidential letter detailing her allegation of sexual assault to Rep. Anna G. Eshoo (D-Calif.), whose office sent the letter to Sen. Dianne Feinstein (Calif.), the ranking Democrat on the Senate Judiciary Committee.

On Sept. 7, the last day of Kavanaugh’s confirmation hearing for the Supreme Court, the letter was still under wraps.

But a few days later, on Sept. 12, the Intercept was the first to report on the existence of Ford’s letter and noted that Democrats on the Judiciary Committee had asked to see it privately but that Feinstein refused. The letter “describes an incident involving Kavanaugh and a woman while they were in high school,” the Intercept reported.

Two things happened the next day, Sept. 13. The New York Times reported that the letter involved “possible sexual misconduct” and Feinstein issued a vague statement alluding to Ford’s letter without disclosing details. The writer “strongly requested confidentiality, declined to come forward or press the matter further, and I have honored that decision,” Feinstein said. “I have, however, referred the matter to federal investigative authorities.”

The next day, Sept. 14, the New Yorker reported on the contents of Ford’s letter without naming her.

Two days after that, on Sept. 16, Ford went public in an interview with The Washington Post’s Emma Brown. She had not planned on doing so, Ford said, but decided to get out in front of the story after the murmurs and leaks about her letter led reporters to her home and classroom.

Feinstein has said neither she nor her staff leaked Ford’s letter or its contents. Ford and her attorney, Debra Katz, have said they believe Feinstein handled her letter appropriately. “But regrettably others did not,” Katz told The Post previously.

It’s clear that an anonymous source or sources leaked details about Ford’s letter to the Intercept, the Times and the New Yorker, right on the cusp of Kavanaugh’s elevation to the Supreme Court.

Back to Cotton. His suggestion is that Schumer, Bharara and one of Ford’s friends, McLean, somehow orchestrated these last-minute bombshells. (Ford’s interview with The Post led senators to reopen Kavanaugh’s confirmation hearing. The judge and the professor both gave testimony Sept. 27.)

Ford and McLean are friends who attended the same all-girls high school in Maryland. They were roommates in California. Ford testified that she was in Rehoboth Beach, Del., when she wrote the confidential letter that ended up in Feinstein’s hands. McLean lives in Rehoboth. She was among Ford’s supporters at the Senate Judiciary Committee hearing Sept. 27.

The Wall Street Journal reported Oct. 5 that McLean had pressured Leland Keyser to revise her initial statement about Ford’s allegation. Ford had named Keyser as one of the attendees of the 1982 gathering in which she said Kavanaugh assaulted her, although she said Keyser was not in the room but downstairs. Keyser at first said she did not know about an alleged sexual assault involving Kavanaugh; then, after pressure from McLean, she revised her statement to say she believed but could not confirm Ford’s account.

That’s as far as the facts go. There’s no evidence that McLean tipped off Bharara, Schumer or both about Ford’s letter.

Representatives for Cotton did not respond to our questions. Yet it’s not hard to imagine that the senator picked up some Internet chatter from conservatives making this fanciful connection.

“That’s Monica McLean, who served as a spokesperson for @PreetBharara, appendage of @chuckschumer,” Republican strategist Phil Kerpen tweeted Oct. 3, linking to a picture of McLean at Ford’s hearing. The next day, he added, “Feeling more like this was a Schumer op, forced on Feinstein via the Intercept leak when she wouldn’t act on the letter. That’s why her heart wasn’t in it.”

The connection here appears to be based on a pseudonymous conservative blogger’s analysis of a news release from Nov. 30, 2009, which announced a three-month prison sentence for a contractor in New York who had pleaded guilty to making an illegal payment to a union official.

As is common in criminal investigations, multiple agencies collaborated on this case. It’s also common for law enforcement agencies to give each other kudos in their news releases when a target is indicted, convicted or sentenced, and it’s a matter of routine to include press contacts for each agency in the same news release.

That’s what happened here. The 2009 news release clearly lists four agencies: the U.S. attorney’s office, the FBI, the New York City Department of Investigation and the Office of the Inspector General of the U.S. Department of Labor.

McLean’s name is listed as a press contact under the FBI header, not the one for the U.S. attorney’s office.

“Monica McLean has never worked for me. I couldn’t pick her out of a lineup and I have no contact with her,” Bharara tweeted in response to conservative writer Erick Erickson on Oct. 5, after Erickson tweeted that McLean had “worked for” Bharara.

In an interview, Bharara repeated that he did not know McLean and that she never worked for him, and he added that U.S. attorney’s offices do not oversee FBI employees because they are two different agencies.

Hey @TomCottonAR Monica McLean never worked for me. I couldn’t pick her out of a lineup & we have zero contact. Kavanaugh’s former deputy Bill Burck, meanwhile, is a close personal friend. You’re not even good at the dumbest of dumb conspiracy theories. @hughhewitt https://t.co/UNMCYuBeZ1

Bharara was once chief counsel for Schumer in the Senate. However, for Cotton’s theory to work, McLean has to be in the picture, too.

Her attorney, David H. Laufman, wrote in an email: “As a supervisory special agent assigned to the press office of the FBI’s New York Division in 2008-2009, Monica McLean was responsible for coordinating news releases with the press office of the U.S. Attorney’s Office for the Southern District of New York (USAO-SDNY). But Ms. McLean has never been employed by USAO-SDNY or by Preet Bharara. Moreover, Ms. McLean has never met or personally communicated with Mr. Bharara.”

Dawn Dearden, a spokeswoman for the U.S. Attorney’s Office for the Southern District of New York, said McLean “did not work here.”

Schumer spokesman Matt House called it “another fairy tale from Senator Cotton, reminiscent of his trip to the White House when he lied about what the president said about immigrants from Africa.” (Trump in a Jan. 11 meeting at the White House disparaged African immigrants as coming from “shithole countries.” Cotton said he heard “shithouse” and not “shithole” at the meeting.)

We decided to fact-check Cotton because U.S. senators should get the facts straight before trotting out incendiary accusations.

Not a whiff of evidence shows that McLean conspired with Bharara or Schumer or both to leak details about Ford’s letter. Contrary to what Cotton said, McLean never worked for Bharara. McLean left the FBI’s New York field office in 2009; Bharara was U.S. attorney from 2009 to 2017. Bharara and McLean both say they don’t know each other.

A few minutes of simple research would have set things straight for Cotton. Bharara had tweeted four days before Cotton’s interview that McLean “never worked for me,” and it’s an elementary fact that U.S. attorneys don’t supervise FBI agents. (Senators should know that kind of stuff.)

This Four Pinocchio claim should serve as a reminder: Just because someone says it on the Internet doesn’t make it true.

Washington Post Rating:
Four Pinocchios
"I believe the Schumer political operation was behind this from the very beginning. We learned last week that a woman named Monica McLean was Ms. Ford’s roommate, and she was one of the so-called beach friends who encouraged Ms. Ford to go to Dianne Feinstein and the partisan Democrats on the Judiciary Committee. Well, it just turns out, it just so happens that Monica McLean worked for a Preet Bharara, the former U.S. attorney in Manhattan, now a virulent anti-Trump critic on television and former counsel to Chuck Schumer. So I strongly suspect that Chuck Schumer’s political operation knew about Ms. Ford’s allegations as far back as July and manipulated the process all along to include taking advantage of Ms. Ford’s confidences.”
Tom Cotton
U.S. Senator (R-Ark.)
http://www.hughhewitt.com/senator-tom-cotton-on-the-lefts-descent-into-the-tactics-of-intimidation/ 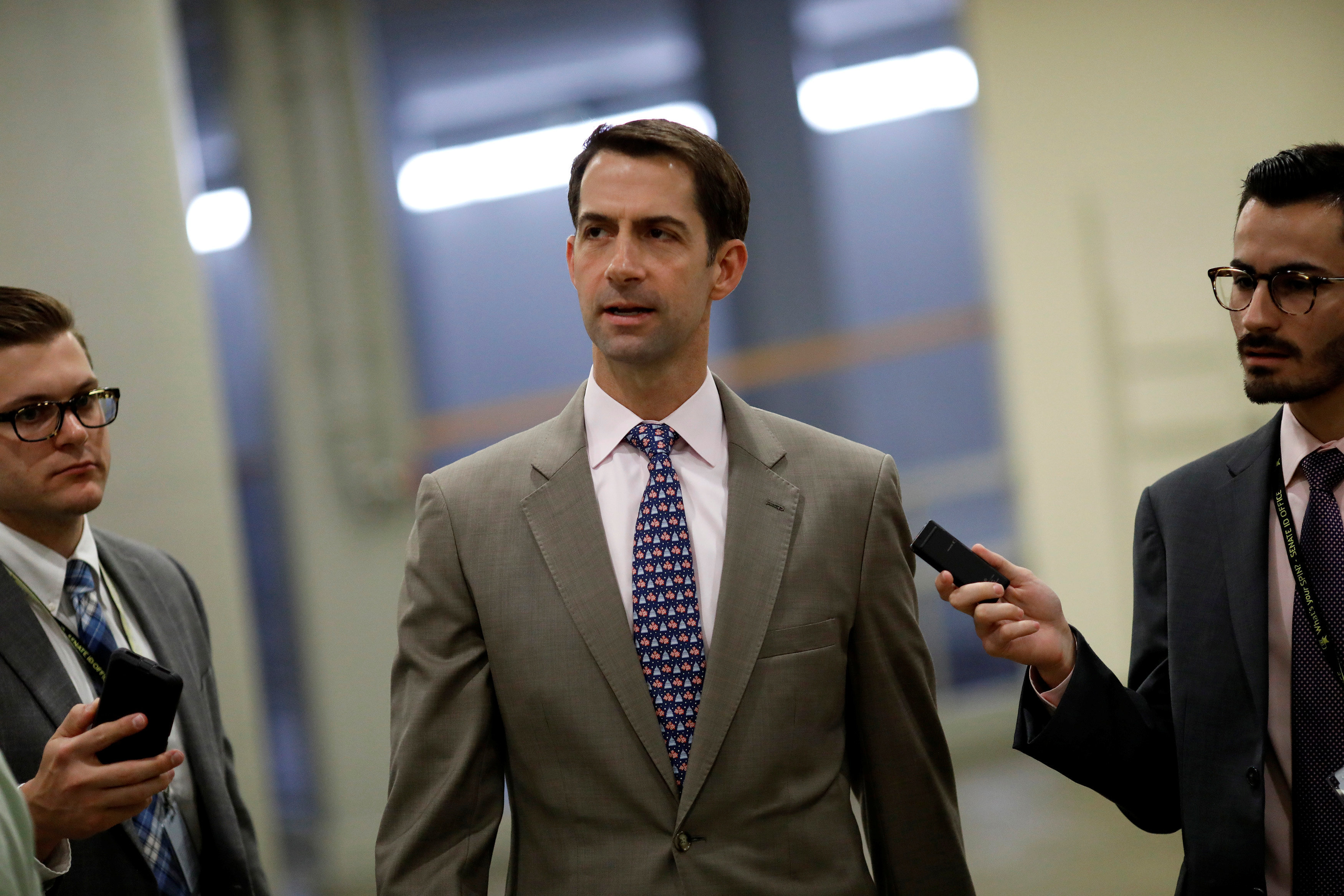