Jake Tapper, CNN: “Mayor de Blasio, why is that police officer still on the force, the one who killed Eric Garner? Please respond.”

New York Mayor Bill de Blasio: “Well, let me tell you. I know the Garner family. They’ve gone through extraordinary pain. They are waiting for justice and are going to get justice. There’s finally going to be justice. I have confidence in that, in the next 30 days, in New York. You know why? Because for the first time, we are not waiting on the federal Justice Department, which told the city of New York that we could not proceed because the Justice Department was pursuing their prosecution. ... There’s one last point I have to say about the Justice Department. The vice president [Joe Biden] for two-and-a-half of those years, Mr. Vice President, tell us, what did you do to try and spur on the Justice Department to act in the Garner case?”

De Blasio often gets questions about the years-long delay in starting disciplinary proceedings for Daniel Pantaleo, the police officer accused of using fatal force on Eric Garner in 2014.

For many viewers tuning in to the debate, though, it may have been the first time hearing the mayor’s defense. De Blasio said federal prosecutors “told the city of New York that we could not proceed because the Justice Department was pursuing their prosecution.”

As we found in this fact check of claims from several candidates, de Blasio’s statement is false because the New York Police Department could have started disciplinary proceedings for Pantaleo even as the Justice Department investigated. Federal prosecutors can request that local law enforcement agencies hold off on disciplinary proceedings, but the feds have no way to block these probes.

De Blasio’s claim is worth a closer look, and its own Pinocchio rating.

On July 17, 2014, police officers in Staten Island attempted to arrest Garner, a 43-year-old African American, after accusing him of selling loose, untaxed cigarettes. Garner protested. Onlookers shot video of the scene. Pantaleo approached Garner from behind and attempted to restrain him by the chest and neck.

Once Garner was down, police officers put their weight on him. The video shows Garner saying “I can’t breathe” 11 times. The New York City medical examiner determined that Garner died after going into cardiac arrest from an asthma attack precipitated by the pressure on his neck and chest. The medical examiner listed “chokehold” as one of the causes of death.

The city settled a wrongful-death claim brought by Garner’s family for $5.9 million. Under de Blasio, the city also fought in court to keep Pantaleo’s misconduct record secret, but was overruled by a judge in 2015.

Pantaleo was suspended Aug. 2, after an administrative judge found that he used a chokehold prohibited by the New York Police Department. The judge recommended that Pantaleo be fired. That decision rests with the city’s police commissioner, James P. O’Neill.

The officer’s suspension came more than five years after Garner’s death. In the interim, Pantaleo was on desk duty, collecting a salary and building up his pension.

The Washington Post’s Wesley Lowery reported that “the bureaucracy of justice has moved at a glacial pace” in Pantaleo’s case and noted “the extraordinary difficulty of holding police to account for deadly violence — even when the death is captured on camera and witnessed by the world.”

“The more than 20 hours of trial testimony — together with previous public accounts of the incident — permit a comprehensive and detailed examination of Garner’s death, one of the most consequential events in the 174-year history of the NYPD and a pivotal flash point in what would become the Black Lives Matter movement,” The Post reported June 13 in a detailed look at the case.

In December 2014, a grand jury in New York declined to charge Pantaleo. Following that, Eric H. Holder Jr., then the U.S. attorney general, announced a federal civil rights investigation into Pantaleo. Shortly before the statute of limitations ran out, last month, the Justice Department announced that Attorney General William P. Barr had decided not to bring charges. The probe has dragged on so long, Barr was the fourth Senate-confirmed attorney general to review the case.

The Post reported that the federal probe “stalled after attorneys in Washington, who wanted to charge the officer with civil rights violations, met resistance from FBI investigators and federal prosecutors in New York, who did not.” Barr ultimately sided with the New York prosecutors.

... prosecutors in the United States attorney’s office in Brooklyn, led by Loretta E. Lynch, did not believe they could win in court and balked at bringing charges.
Once Ms. Lynch succeeded Mr. Holder in April 2015, however, Vanita Gupta, the head of the civil rights division, and her lawyers convinced Ms. Lynch that the officers had very likely violated Mr. Garner's civil rights.
Ms. Lynch allowed the civil rights division to take a lead role in the case, and the following September the department replaced the F.B.I. agents and prosecutors who had been working on the case with a new team from outside of New York.
The two sides disagreed over whether the widely published video of Mr. Garner's arrest proved that Officer Pantaleo had acted wrongfully. Prosecutors in Washington D.C. accused their colleagues in Brooklyn of mishandling the investigation.
The case stalled again after Mr. Trump won the presidential election and appointed Jeff Sessions as his attorney general. Civil rights division prosecutors recommended to the deputy attorney general, Rod Rosenstein, that charges be brought, but he declined to move forward.

De Blasio blamed the feds, and he often notes that as mayor, he lacks the power to fire police officers. That’s accurate, but it should be noted that O’Neill, the police commissioner, reports to the mayor.

The New York Police Department could have started Pantaleo’s disciplinary proceedings years ago. Even if federal prosecutors requested to go first, they could not force the city to wait, and there’s no record showing that the Justice Department attempted to block the city’s internal probe.

As the Associated Press reported July 16, “De Blasio also said that it was a mistake for the city to wait for federal prosecutors to finish investigating Garner’s death before the police department began disciplinary proceedings. But there is no rule requiring the NYPD to do so.”

A 2019 report on community policing by the Leadership Conference on Civil Rights says: “The U.S. Supreme Court ruled in Garrity v. New Jersey that officers compelled to speak to investigators in order to avoid discipline may not have their statements — or other evidence obtained by means of those compelled statements — used against them in a criminal prosecution. In light of this ruling, departments have sought to delay administrative investigations to avoid even the slightest possibility of tainting subsequent criminal prosecutions. However, under this approach, the administrative investigation takes so long — sometimes more than a year — that the ability to obtain reliable statements from involved officers can be seriously compromised.”

In fact, de Blasio’s answer at the debate makes little sense because the NYPD announced a year ago, in July 2018, that it was starting Pantaleo’s disciplinary proceedings.

The NYPD’s delay had a material effect. As Lowery reported, “In a typical administrative hearing, prosecutors would need only to prove that Pantaleo had violated department policy to get him disciplined or fired. But in this case, the years-long delay had worked in the officer’s favor. Because so much time had passed, NYPD rules required prosecutors to prove both that Pantaleo had used a banned chokehold and that doing so rose to the level of criminal conduct.”

Last year, the New York Times reported: “ ‘No one is dragging their feet,’ Mr. de Blasio said on July 17, 2016, in response to a question about the process, which, even then, seemed unnecessarily delayed. ‘Everything is being done meticulously because we want to make sure that what happens is fair to everyone involved.’ ” After the administrative judge recommended Pantaleo’s firing Aug. 2, de Blasio called it a “fair and impartial process,” but declined to say whether the officer should go.

One final point: At the debate, de Blasio tried to turn the delays in the Garner case into an attack on former vice president Joe Biden. “Mr. Vice President, tell us, what did you do to try and spur on the Justice Department to act in the Garner case?” de Blasio said. Although the president has constitutional authority over the Justice Department, prosecutors are supposed to operate independently. The vice president, however, has no such authority.

This is a Four-Pinocchio claim from de Blasio. Neither his office nor his presidential campaign provided evidence for the mayor’s assertion.

In fact, the NYPD could have started those proceedings years ago. In fact, it did start that process well before the Justice Department closed its civil rights investigation this year with no charges. The NYPD’s delay had a material effect, because it meant more requirements for prosecutors seeking to prove Pantaleo’s culpability.

Washington Post Rating:
Four Pinocchios
"I know the [Eric] Garner family. They’ve gone through extraordinary pain. They are waiting for justice and are going to get justice. There’s finally going to be justice. I have confidence in that, in the next 30 days, in New York. You know why? Because for the first time, we are not waiting on the federal Justice Department, which told the city of New York that we could not proceed because the Justice Department was pursuing their prosecution."
Bill de Blasio
Mayor of New York City (D)
https://www.washingtonpost.com/politics/2019/08/01/transcript-night-second-democratic-debate/ 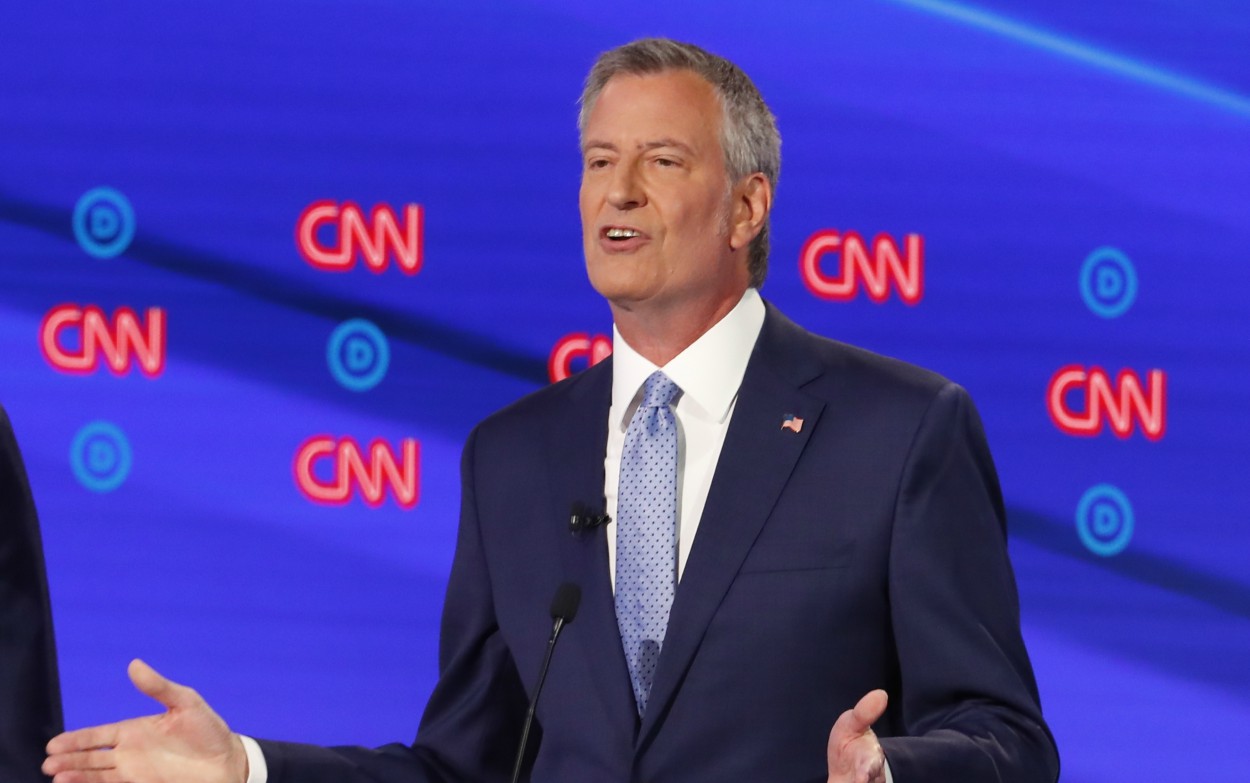