Midterm elections are almost always a referendum on the incumbent president, and this fall’s campaign appears poised to follow the historical pattern.

In the past three decades, both parties have suffered major midterm losses in the House two years after capturing the White House. Democrats lost 54 House seats under Bill Clinton in 1994 and 63 seats under Barack Obama in 2010. Republicans lost 42 seats under Donald Trump in 2018.

One recent exception to the pattern of the president’s party losing House seats in a first-term midterm came in 2002, when George W. Bush used the attacks of Sept. 11, 2001, to rally voters around the theme of terrorism and help his Republican Party gain seats.

The most closely watched indicator in a midterm election year is generally the president’s approval rating. The state of the economy is also important, though the direction of the unemployment rate — up or down — can count for more politically than the exact number. This year, inflation concerns have trumped the low jobless levels as an issue of concern.

Assessments of presidential job performance are not a perfect predictor of the size of House losses or gains and are even less reliable in Senate races. But a rough rule of thumb holds that the further a president’s approval rating is below 50 percent, the worse the president’s party will do.

President Biden’s approval rating average is in the low 40s, pointing to serious losses. Democrats hope his numbers will improve, but presidents almost never see their approval ratings rise appreciably between the beginning of a midterm election year and the November balloting.

LEFT: President Biden meets with Ukrainian refugees during a visit to PGE Narodowy Stadium in Warsaw in March. (Evan Vucci/AP) RIGHT: President Biden congratulates Ketanji Brown Jackson in April, moments after the U.S. Senate confirmed her to be the first Black woman to be a justice on the Supreme Court. (Oliver Contreras for The Washington Post)

But just how big could the Democrats’ losses be? And to what extent is history helpful?

Alan Abramowitz of Emory University argues that a better indicator of the size of House losses for the party holding the White House is what is known as the generic ballot — a poll question that asks people which party they favor in the House race in their district. That indicator suggests Republicans will gain more than the five seats needed to take control but perhaps not as many as some of the recent blowouts: 1994, 2010 or 2018.

Several factors could contribute to smaller losses this time. One is that Republicans gained seats in 2020. Usually the party that loses the White House also loses House seats. Those 2020 results mean Democrats have already given back some of their gains from 2018, and Republicans have already plucked some of the easiest districts. 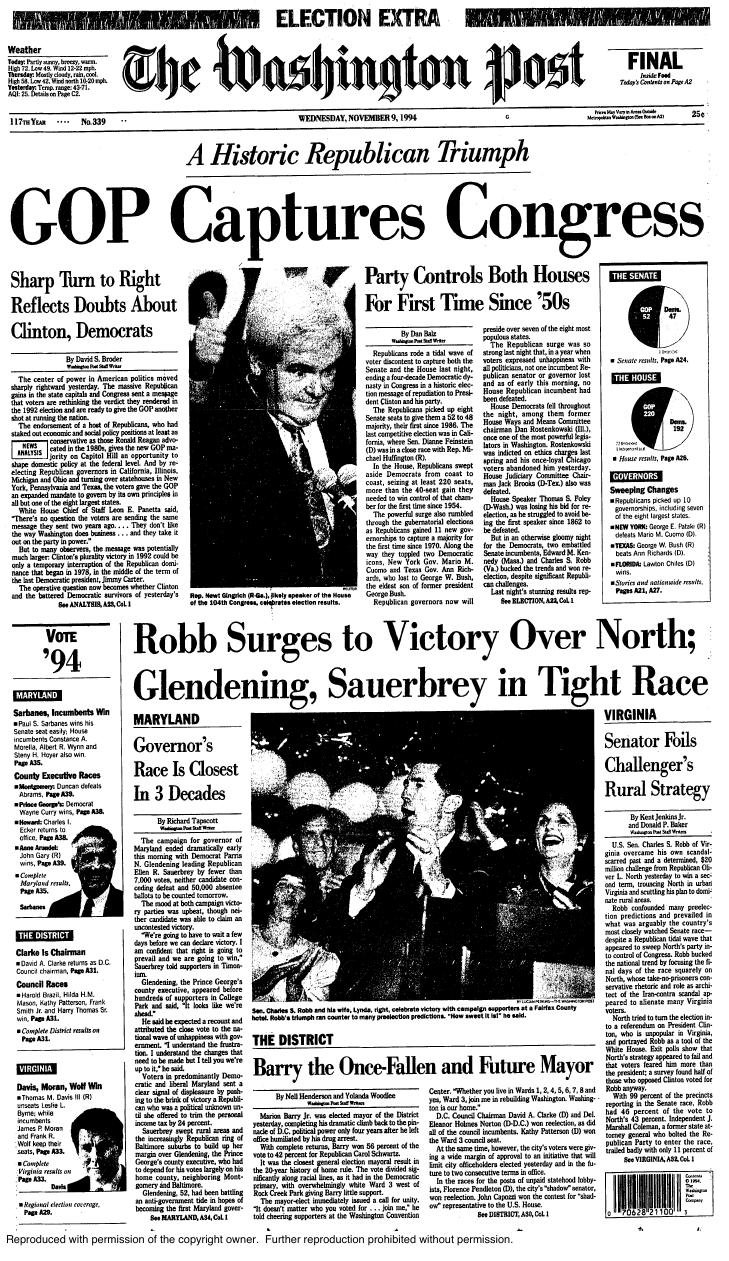 1994: Republicans swept to power in the House and Senate in an historic victory that ended four decades of Democratic control of the House and ushered in a new breed of GOP legislators led by Speaker Newt Gingrich. 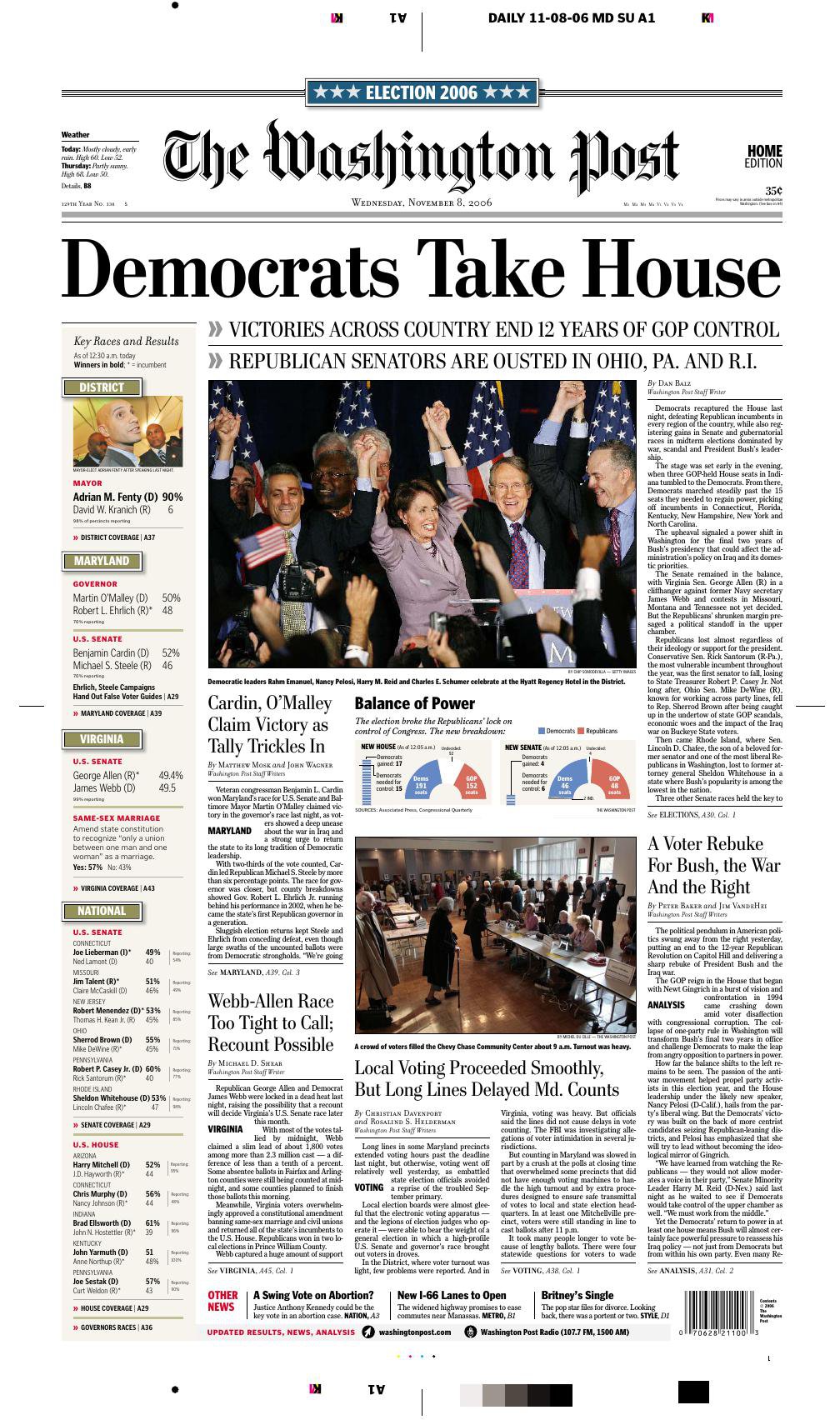 2006: Democrats took control of the House and Senate as rising disillusionment with the war in Iraq and dissatisfaction with the leadership of President George W. Bush combined to hand Republicans major losses. Bush said Democrats delivered “a thumping” to the GOP. 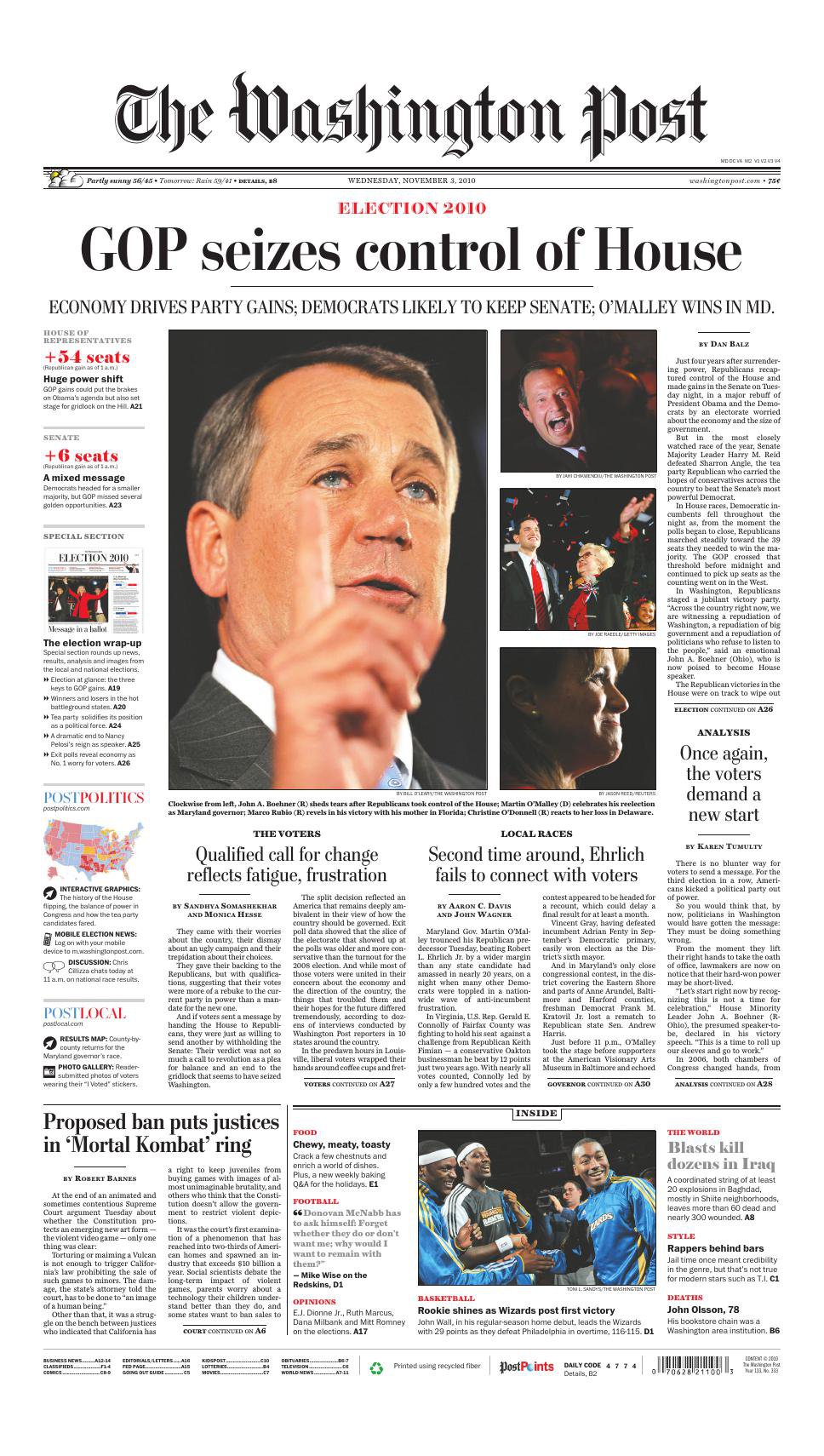 2010: After his historic victory in the 2008 election, President Barack Obama and the Democrats suffered a major setback in 2010, ceding control of the House to the Republicans in a campaign fueled by tea party anger toward Washington. Obama called the results a “shellacking.” 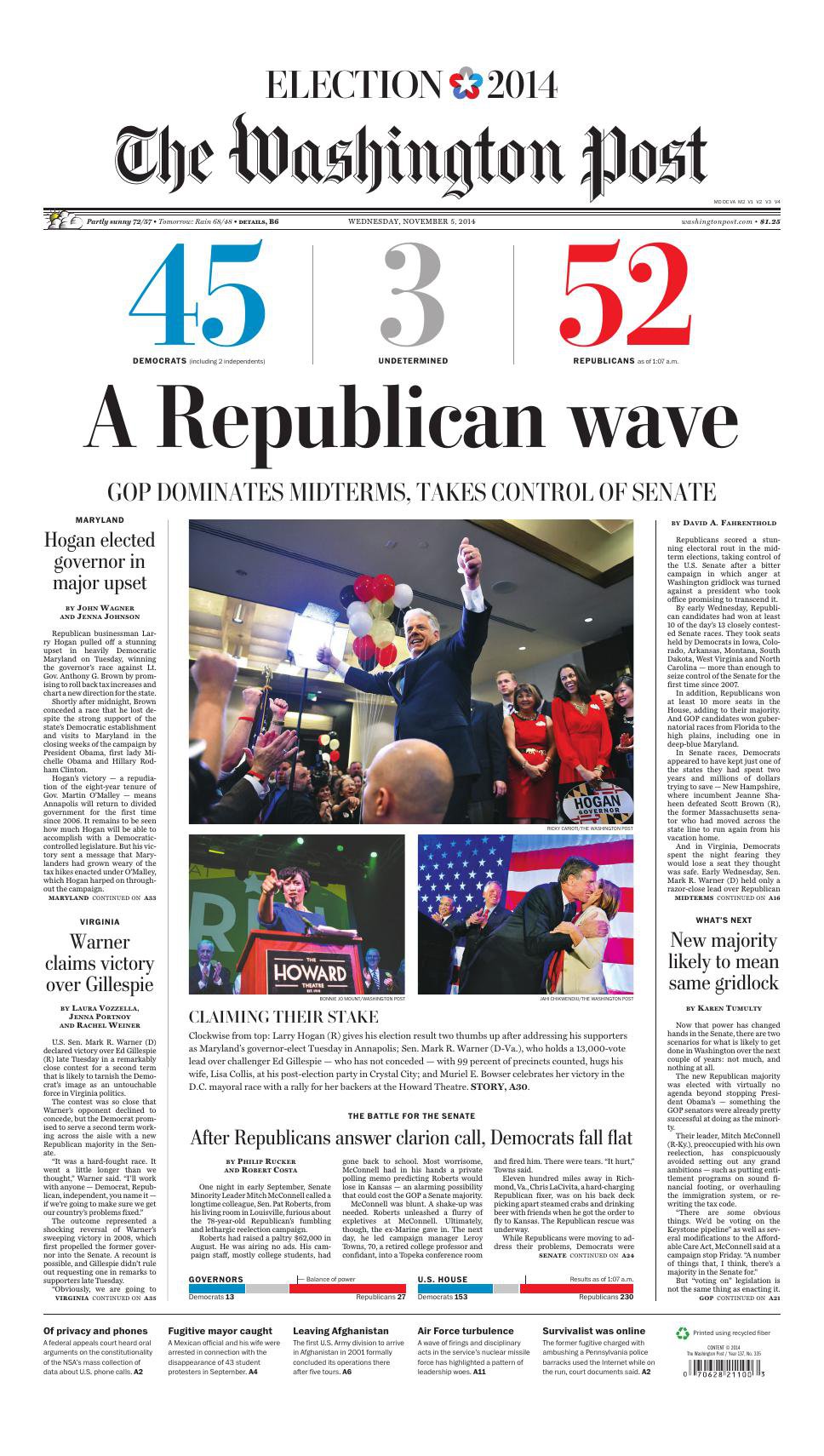 2014: Republicans completed their takeover of Congress by capturing control of the Senate and adding seats to their House majority. Democrats suffered substantial losses at all levels of government during the Obama presidency. 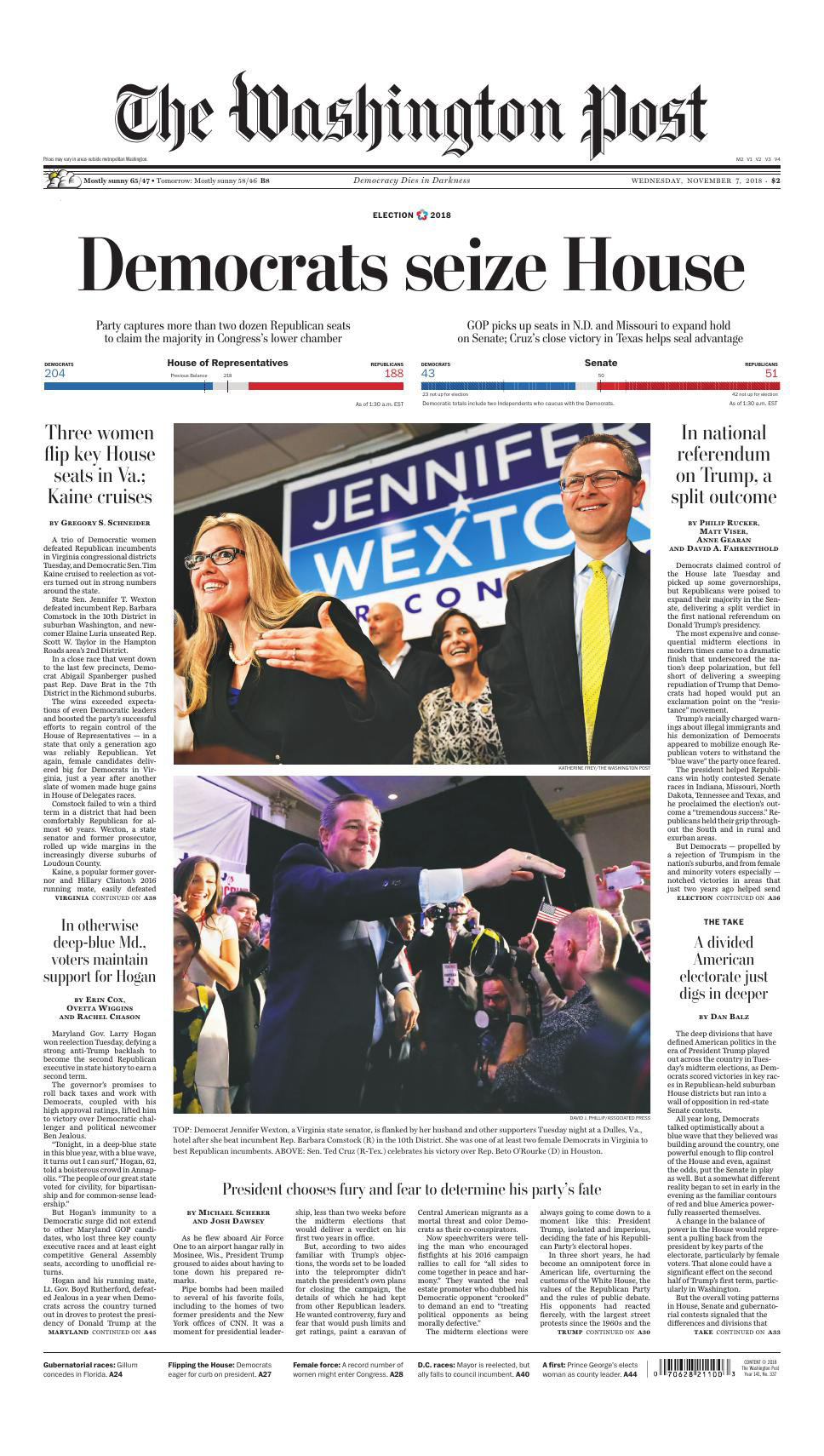 2018: Revulsion against President Donald Trump, fueled by an army of female voters across the country, brought Democrats to power in the House and sent a historic number of female legislators to Congress.

Through redistricting and the geographic sorting of the population, there are fewer competitive swing districts. The Cook Report with Amy Walter notes that after the 1996 election, there were 164 competitive districts, defined by the margin of victory in the previous election. The number of competitive districts fell steadily and hit a low of 72 after 2016, but then ticked up to 78 after the 2020 election — still far below earlier times.

Despite these caveats, an election-year tsunami could deliver major Republicans gains in the House.

Predicting shifts in Senate seats is more difficult, in part because only one-third of seats are up for grabs each election year, and therefore political geography is a factor in the results. There have been some years when the president’s party loses big in the House but not the Senate. In 2018, for example, Republicans gained a Senate seat despite losing control of the House because many of the competitive Senate races were in red states.

Several factors are at play here. One is candidate quality. In 2010, Republicans lost Senate elections in states they might have won because their candidates weren’t ready for prime time. Does anyone remember tea-party favorite Christine (“I am not a witch”) O’Donnell in Delaware? If not, have a look.

Democrats could hold the Senate this year in part because they are defending fewer seats. Of the 35 seats up for reelection this year, 14 are held by Democrats, none in states Trump carried in 2020. Republicans will be defending 21 seats, including in two states (Wisconsin and Pennsylvania) won by Biden.

In recent years, something else has come into play in Senate races. The party that wins the presidential vote in a state almost always now wins Senate races. In 2016, there was no deviation from that pattern. In 2020, Sen. Susan Collins (R-Maine) won her reelection bid as Biden was winning the state’s popular vote, making her a rarity.