Get 'em while they’re hot! Here are six players shooting up fantasy football draft boards — and with good reason.

Note: Since this article was first published on Aug. 22, Houston RB Lamar Miller suffered a season-ending injury. That made Johnson the Texans’ starting RB, at least for the time being, and makes him much more attractive to fantasy drafters, resulting in a further spike in his ADP, which is now at 7.04.

What was supposed to be a tight battle for the role of top RB in Seattle has turned into something of a rout. By many accounts, Carson, a seventh-round pick in 2017, has left in the dust Rashaad Penny, a first-rounder last year.

Some of this may have as much to do with Penny’s underwhelming performance in training camp and thus far in preseason games as with Carson’s impressive play. Noting that Penny “has just 13 yards on 12 carries” in the preseason, Joe Fann of NBC Sports Northwest wrote Wednesday that the second-year player “hasn’t shown much burst or make-you-miss ability,” and that he is “seeing a guy fall further behind Chris Carson, who has established himself as Seattle’s clear No. 1 option.”

Carson was the overall RB5 from Week 11 through the end of last season, and that was with just 12 receptions in that span. Reports from Seattle indicate that the team is planning on using him, and possibly Penny as well, more extensively in the passing game, which can only mean good things in fantasy.

Coleman really began his rise Aug. 8, which just happened to be a day that brought news of a setback in Jerick McKinnon’s return from surgery to repair a torn ACL. While McKinnon went off for a course of platelet-rich plasma injection therapy, the fantasy community saw that what had been a frustrating, three-headed RB monster in San Francisco was suddenly trimmed to a much more manageable two.

The other top 49ers RB, Matt Breida, has enjoyed an even greater surge in his ADP, from 13.03 to 10.01, but drafters clearly view Coleman as the better play. Coleman played for 49ers Coach Kyle Shanahan when the latter was the Falcons’ offensive coordinator, and although he is set to share the workload with or without McKinnon, he appears slated for a lead role and should get touches as a receiver and a goal-line back.

Few players seem to have generated as much positive buzz, starting with offseason training sessions, as Samuel. As a result, there’s reason to think that he, not 2018 first-round pick D.J. Moore, might actually be Carolina’s most productive WR this year.

It may not matter much who emerges as top dog, because there should be plenty of targets to go around, following the departure of Devin Funchess to the Colts. Samuel, a 2017 second-round pick who saw time as an RB at Ohio State, got off to a slow start in the NFL, but he has drawn raves for his progress this year, particularly in the technical aspects of his position.

“He’s had the most growth out of any player I’ve ever seen in terms of as a player, confidence … everything,” Panthers WR Torrey Smith said of Samuel earlier this month. “I’m expecting him to have a huge year." 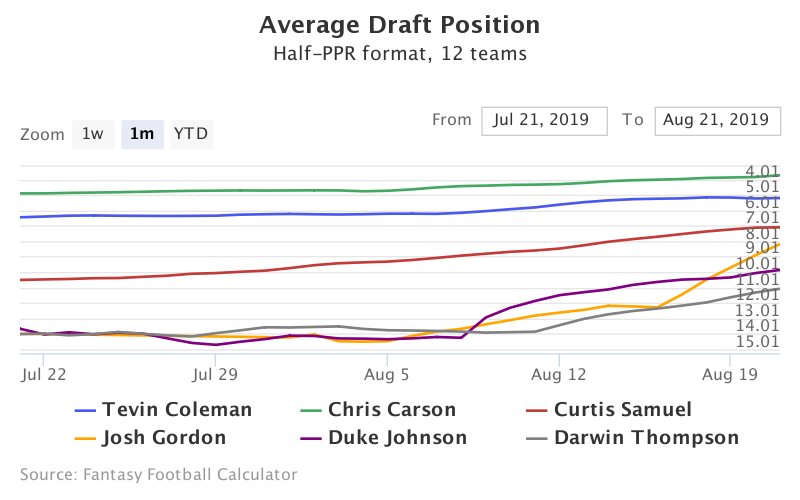 This one isn’t that hard to figure out. Gordon’s ADP had already been inching upward, as drafters noticed indications from the Patriots that they might be expecting the oft-suspended WR to play, and then it went on a rocket ride as of Friday, when he was conditionally reinstated by the NFL.

Even though Gordon has suited up for just 17 games since 2014, 12 of them came last year and he showed he hadn’t lost much of the talent that helped him lead the league in receiving in just 14 games in 2013. Add in the fact that his services are sorely needed by New England, which lost Rob Gronkowski to retirement and doesn’t appear to have much at WR outside of Julian Edelman, and Gordon’s ADP could go much higher before the month ends.

As with Coleman, Aug. 8 was a big day for Johnson’s fantasy stock, because that was when a trade to Houston finally liberated him from the Browns, where he was slated to eke out touches behind Nick Chubb until likely getting even fewer when Kareem Hunt came off his suspension.

Even if Johnson doesn’t become the Texans’ top back, he has a much better path to playing time as a pass-catcher in Houston, which doesn’t have an established TE and does have a pair of frequently banged-up WRs in Keke Coutee (who is already nursing an ankle injury) and Will Fuller.

Johnson himself had been sidelined with a hamstring injury, but he got in his first practice with his new team Tuesday, giving Texans Coach Bill O’Brien a few weeks to implement his “vision for how we want to use” the fifth-year RB. Shortly after the trade, O’Brien described Johnson as “a first-, second-, third-down running back,” and if he’s actually used that way, he’ll be quite a draft value even at an ADP four rounds higher than it was just a couple of weeks ago.

It’s not out of the question that Thompson becomes the Chiefs’ top RB before the season ends.

Already, the sixth-rounder from Utah State has gained plenty of ground in the battle for the No. 2 spot in Kansas City, and in fact, The Athletic’s Nate Taylor reported Wednesday that Thompson “appears to have leaped over veteran Carlos Hyde on the depth chart.” That came a day after Taylor predicted that the much-traveled Hyde, whose ADP has tumbled from 9.07 to 11.03 over the past month, wouldn’t even make K.C.'s 53-man roster.

Assuming all that comes to pass, then Thompson would only need to unseat Damien Williams, who has never had more than 50 carries in any of his first five NFL seasons. On the other hand, 34 carries, plus 35 more in the playoffs, came during a five-game stretch last season in which Williams lit it up after the Chiefs released Hunt.

Williams will start the season with a tremendous opportunity to cement his position as the lead back for one of the league’s most explosive offenses, but his ADP has slid from 2.07 to 2.12 on reports that he’ll be in more of a committee than his owners would prefer. The 5-foot-8, 200-pound Thompson showed last year an eye-opening combination of speed (4.50 in the 40), power (6.91 yards after contact per touch, per Pro Football Focus) and receiving ability (15.3 average on 23 catches), and he could continue to be a late-round steal — assuming he even remains in the late rounds.

Top players to draft at quarterback, running back, wide receiver and tight end

TOP STORIES
Climate Change
Reporting on Earth’s changing climate and the people trying to find solutions to one of the biggest challenges of our era.
The green revolution sweeping Sweden
A tropical wave could become Tropical Storm Bonnie in Caribbean
Rome hits highest temperature on record as heat wave sweeps Europe
Try a different topic
Sign in or create a free account to save your preferences