First in an occasional series on how to watch football smarter

Football is a complicated game. Twenty-two guys with different roles and responsibilities sometimes make it look like three sports are going on at once. Looking beyond where the ball is can spiral into an abyss of terminology and schemes. Trust me, I’ve been there.

If you want to go there too, be my guest, but there are some pretty easy ways to get your head around the basics first. Think of this series as a jumping-off point if you want to go really deep into the game or just a way to get a better overall understanding about what’s happening on the field and why. We’ll start with the building blocks of every play: gaps.

They’re denotations for the spaces between offensive linemen. The typical distance (called a split) is two feet, although that can vary. Gaps are referred to by letters extending out from either side of the center, A through C, or D depending on how many players there are to one side. There are more letters in the alphabet, and there can be more than one tight end in a formation. Ever thought of that, genius?

Yes, technically if you had a two-tight end set there would then be an E-gap. And the E gap exists outside of the D when there is only one tight end, but that’s not really common in the lexicon of the game and more of a theoretical space.

Do the skill players need to know about gaps?

Okay, first of all, linemen take offense to the term “skill players,” which implies that they have no skill when in fact the delineation should be between “big skill” and “small skill.” But I digress …

Running backs absolutely must have an understanding of these terms to know where to go with the ball. Wide receivers? Less so. While they are involved in blocking, they are usually doing it on the perimeter, and the delineations don’t extend to an S-gap for instance. This is for the boys in the “box.”

As a fan, why should I care?

File this in the back of your mind until you’re done reading: Blocking is as much about angles and geometry as it is about brute strength. Sometimes, angles can help offensive linemen compensate for a lack of overwhelming power. When you understand that, then you can look at how and why splits and gaps expand or contract.

Teams that run a pass-heavy, air-raid offense, for instance, make their gaps wider by expanding their splits to help linemen with pass protection.

The air raid is a system that forces opponents to defend the width of the field. Expanding splits to make the gaps bigger is part of utilizing the width. The defensive end has to line up outside the tackle to maintain his rush lane. If he slants hard inside, the tackle is just going to block him down and the quarterback will sidestep to his left and still get his throw off or scramble to the open field because the end has taken himself out of the picture.

Does the defense care about gap names?

If a defender is referred to as a 1/3/5/7-technique, then he’s lined up in the A/B/C/D gap respectively (even numbers means they’re “head-up, or directly across from an offensive lineman). A 3-technique, for instance, will have most of his body in the B-gap, and his inside foot (closest to the ball) will be even with the offensive lineman’s outside foot). Here’s how that looks charted out: He may not necessarily be responsible for that gap when the ball is snapped, but it is where he initially lines up.

Football guys use a bunch of terms with gap as a suffix or a prefix. What’s up with that?

Let’s run through the most common ones you might hear on a football broadcast.

Gap running schemes: This is the family of run plays that include “power” and “counter.” Running plays have a front side (where the ball’s intended to go) and a backside, the midpoint of which is the center.

The extremely oversimplified explanation is that if the play is designed to go to the right, the left guard is on the backside. If that backside guard vacates his position and moves to block a player on the right side (we call that “pulling”), then the play is generally called “power.” If two players from the backside are pulling (commonly a guard and a tackle), then it’s generally “counter,” and the point is to get the running back to hit in a specific gap. We’ll explain them a little deeper in a future part of the series.

One-gap and Two-gap: These are the two schools of thought in defensive line play. One-gapping is when each lineman is responsible for, well, one gap. It’s an aggressive style in that it allows players to shoot the gaps and penetrate the line without much of a second thought. Two-gapping assigns a defensive lineman a primary and a secondary gap to control. He’ll sometimes line head up with an offensive lineman (0, 2, 4 technique) and work toward one gap while pressing the offensive lineman into the other. Executed correctly, that gives the running back nowhere to go, leaving linebackers free to make the tackle cleanly.

Gap control: Simply put, does a player control the gap or gaps with which he’s tasked? It’s not enough to beat an offensive lineman and fly upfield if you don’t make the tackle. Look closely when you’re watching games, and you’ll see defensive linemen square up to maintain their position on running plays. This forces running backs, for instance, to move laterally and into the teeth of multiple defenders instead of gashing north-south through an open hole.

Gap sound/Gap integrity: These terms are basically interchangeable: Do you have a defender for every gap? Eight offensive players on the line of scrimmage means nine gaps to account for. Obviously, that’s going to require more than just linemen and linebackers.

A defense that is not gap sound can be ….

Outgapped: This is where we discover the beauty of the zone read. Let’s say the defense is three-for-three on the left side of the center — a man for every gap.

Well, what if we have a play design in which the quarterback essentially creates an additional gap by reading the unblocked defender and make him wrong whichever option he chooses?

This is how fine the margins are when you combine this design with a generational athlete, as the Ravens show us here.

The Ravens add a gap to the left side with a motioning player to take care of the linebacker. The left tackle heads up to the second level and leaves the backside defensive end, Cincinnati’s No. 96 Carlos Dunlap, alone to contend with both running back Mark Ingram and quarterback Lamar Jackson.

Dunlap isn’t even that wildly out of position. He didn’t completely sell out to tackle Ingram. He took maybe one false step toward him, but that was enough to allow Jackson to run to daylight. If Dunlap had stayed where he was and taken away the threat of Jackson, the Ravens had blocked the play well enough that Ingram would have had plenty of room to the right.

This is just the foundation. From here, we build on this in both the run and pass game. Stay tuned. 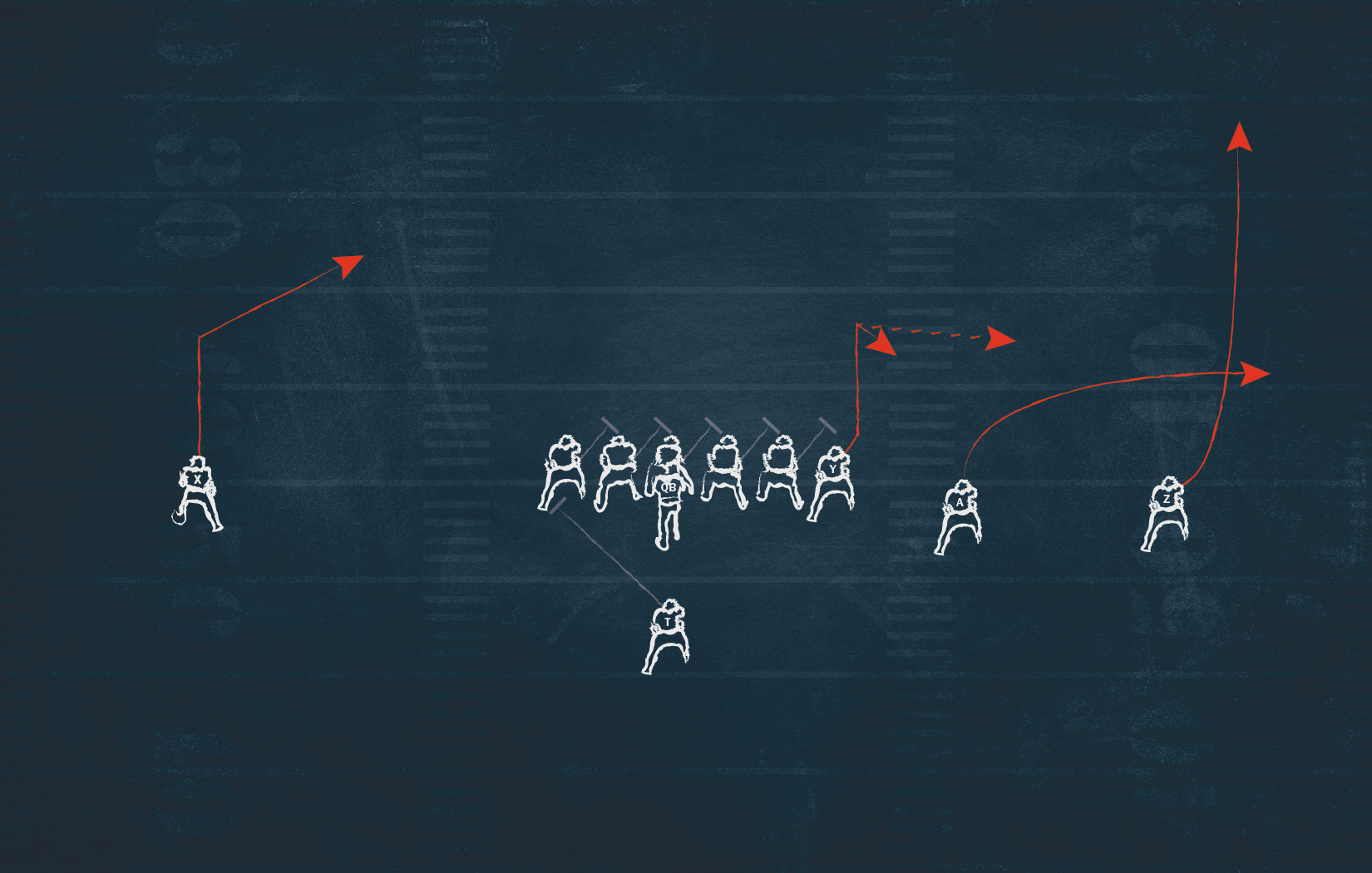