Since May 17, 225 tornadoes have been confirmed in an outbreak sequence that has been tormenting the country. With more than 400 individual tornado reports also logged by the National Weather Service since then, the number of confirmed twisters will probably grow.

The most tornadoes on one day in this current volley came May 27, when the Dayton, Ohio, region was swarmed. More than 45 twisters were confirmed on that day, but even the “quietest” day produced at least eight tornadoes.

Just how "active" have the last 30 days been for tornadoes? We're currently sitting at 500 filtered *eyewitness tornado reports* during this time period.

Tornadoes of late have focused from Texas to Colorado and Nebraska, then eastward through the Midwest, to portions of the Northeast and Mid Atlantic. At least four confirmed tornadoes have been deadly, with the current toll at seven killed and dozens more injured. Given the widespread destruction, the tallies could have been much higher.

May is peak season for tornadoes on average, usually delivering around 270. This stretch alone — with at least 225 tornadoes and climbing — will probably come close to that figure as the counts are finalized. It was also active for a time early month, meaning May is already above average for twister tallies. 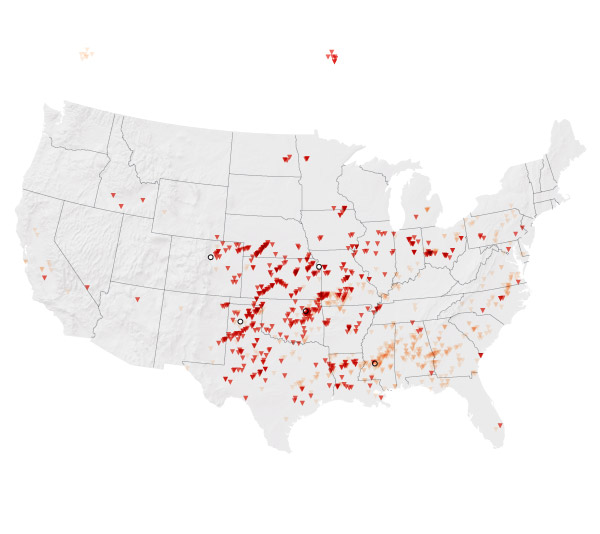 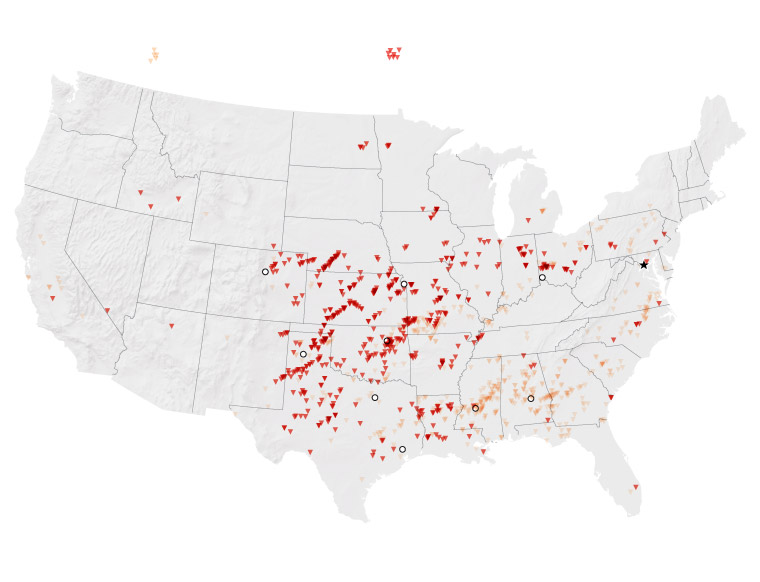 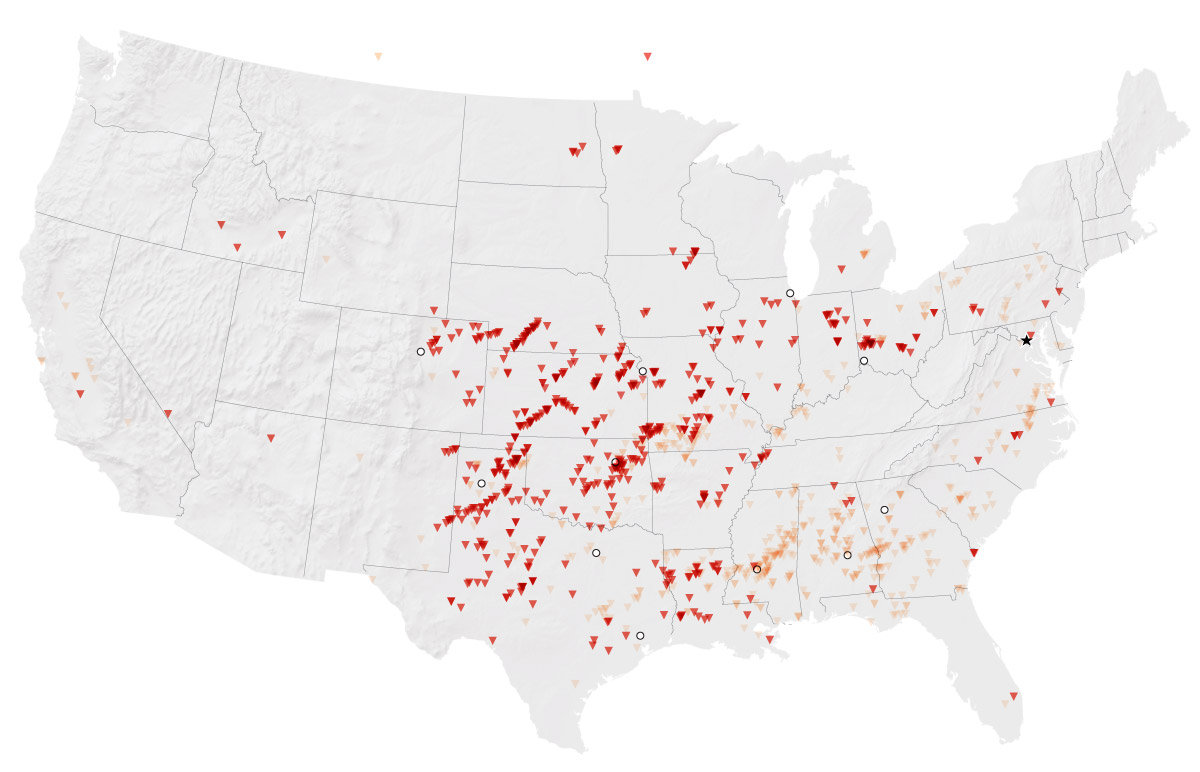 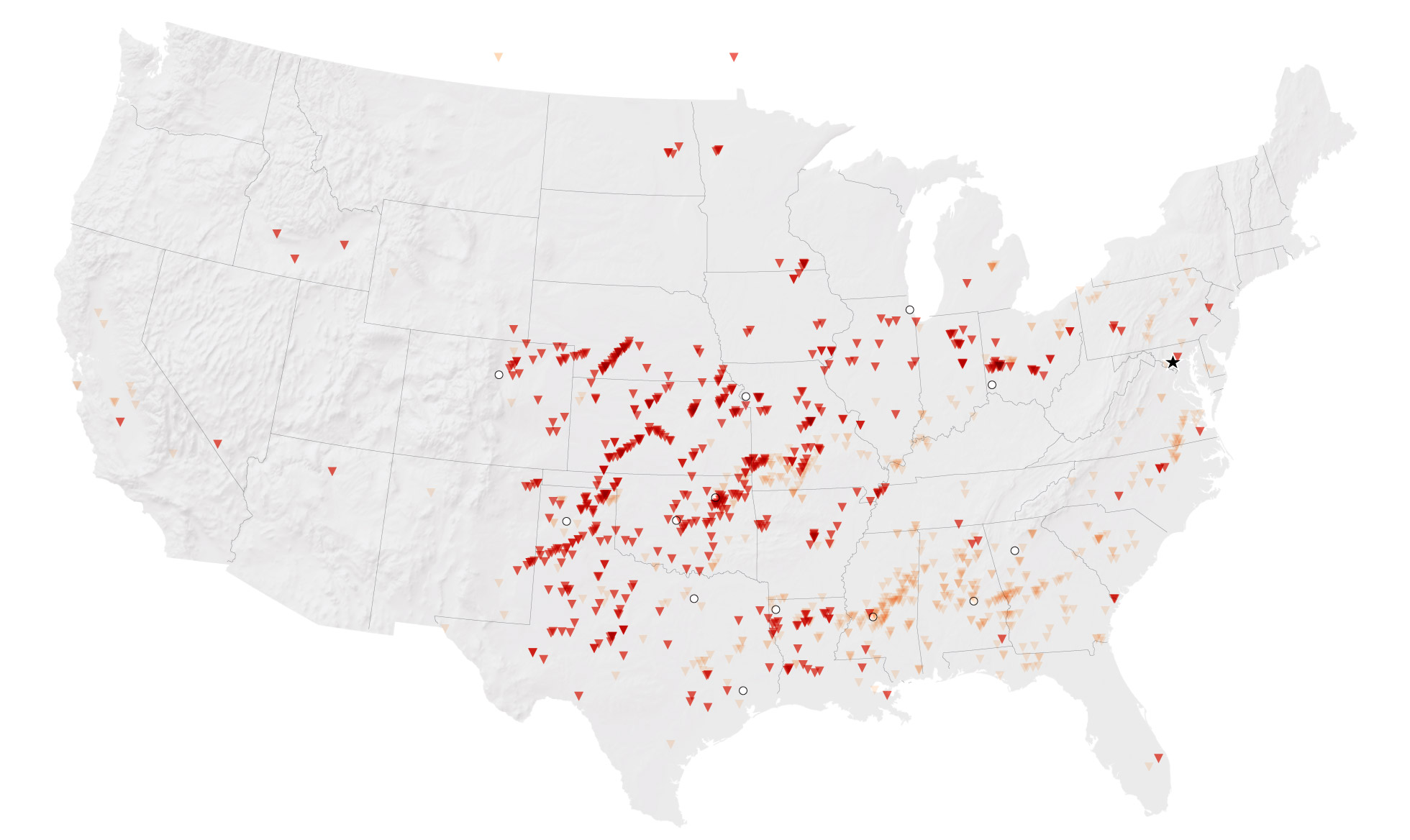 According to various stats, the current run is about as active for as long a period as seen in the modern record since 1950, and the most active since the hyperactive season in 2011 that included notable events such as the April Super Outbreak and the Joplin, Mo., catastrophe.

Filtering out the weakest tornadoes, which have seen considerable inflation in the era of spotting and advanced radar, tallies for this stretch are among the top four years on record for the back half of May, with 131 confirmed F/EF1 or greater tornadoes. This falls behind 2004 (155 F1-plus), 2011 (147 EF1-plus), having apparently passed 1973 (130 F1-plus) for the same time-frame since 1950. 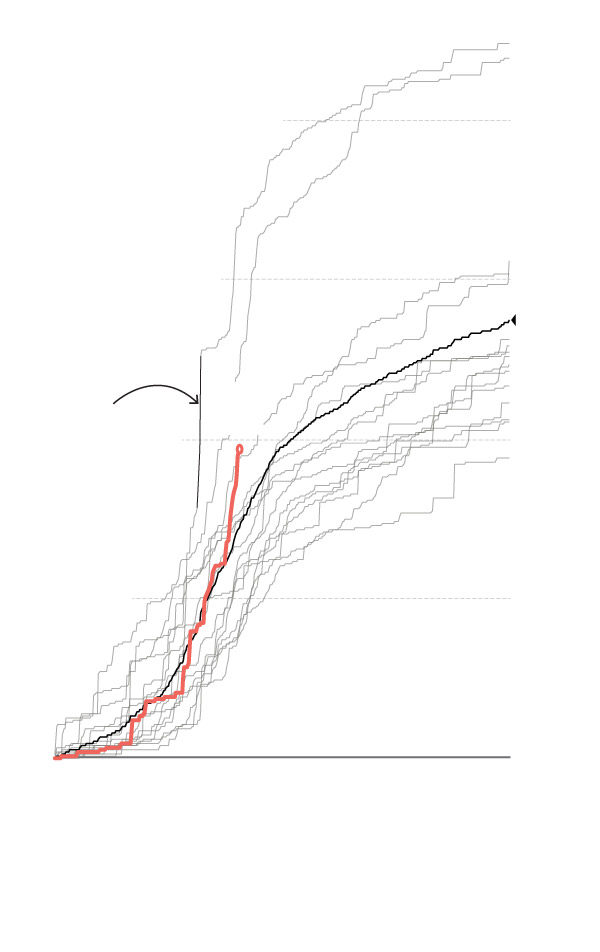 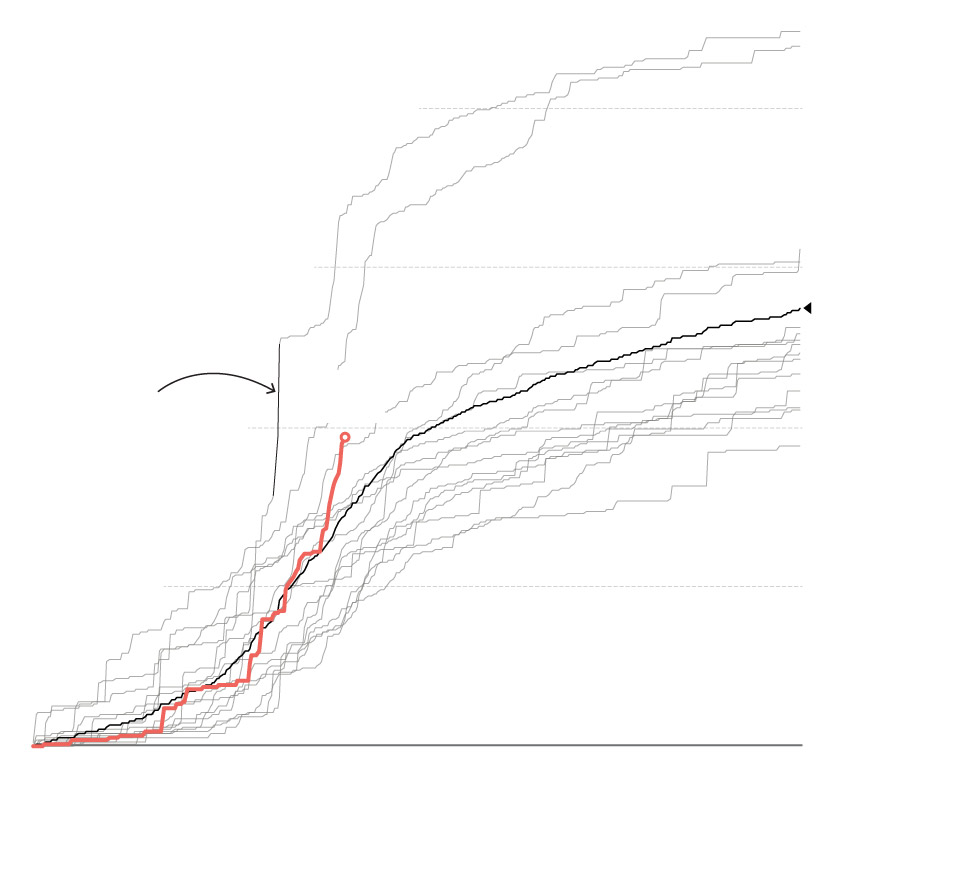 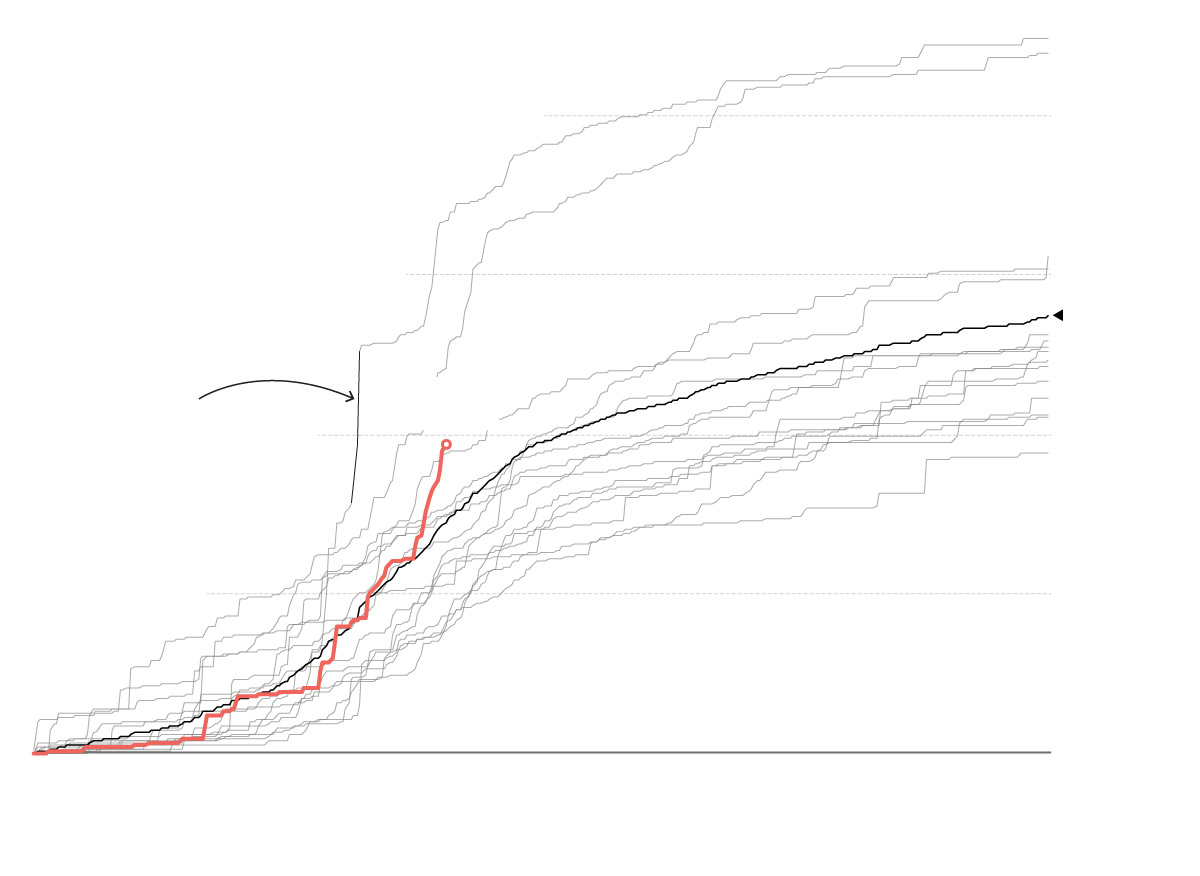 This streak also appears to be in proximity to records for the lengthiest streaks of days with five or more EF1-plus tornadoes.

Harold Brooks, a tornado scientist at NOAA’s National Severe Storms Laboratory, recently tweeted the numbers. In 1980, an 11-day run began May 28. The most recent lengthy streak was during the longest outbreak sequence on record in May 2003, when seven consecutive days occurred.

Per early stats, this stretch has seen at least an eight-day stretch, which would tie for the second-longest on record. Right now, May 25 falls just short with four confirmed EF1 or greater tornadoes, but shifting numbers may mean the record longest streak is still in play here, as well.

And the tornadoes have been hitting residential areas, often after sunset.

Towns like Golden City, Mo., where the deadliest tornado of the slew killed three people at night. Several other locations were tormented at bedtime. Jefferson City, Mo.; Dayton, and El Reno, Okla., among them. Others shrouded the sun as if it were dark, like the terrible wedge tornado that passed from near Lawrence, Kan., to Kansas City on Tuesday.

So, what can we blame for the tornado bombardment? May is peak tornado season, but an extraordinary and persistent pattern has kept conditions conducive for tornadoes on a much longer time scale than normal.

A primary cause in this case is large low pressure systems aloft that have repeatedly moved through the West Coast — delivering chilly and wet weather to California among others out west. As each successive low ejects out of the Rockies, they have spawned round after round of tornadoes across the central and eastern United States.

A weather pattern like this one has been unusually persistent in part because of high pressure blocking in the northern latitudes. High pressure which has been locked near Alaska through the winter continued into spring, and one over Greenland also flexed its muscles. This configuration helped reinforce low pressure and cold air aloft getting locked in the west as high pressure and warm air dominate the east.

This run of twisters also at least loosely fits into the idea that more tornadoes are happening on fewer days in recent history, although this stretch does have precedent, and similar activity seems to happen, on average, about once every decade or two.

The stretch is remarkable in more than its persistence. It was also extremely well signaled. For example, scientists working on the Extended Range Tornado Activity Forecasts highlighted the potential in late April, as did various weather modeling systems.

The shorter term has not been so easy for forecasts.

A high risk for severe weather — the greatest on a scale of 1 to 5 — was largely considered to underperform on May 20 in the Southern Plains. Another particularly dangerous situation tornado watch produced few major storms in parts of Oklahoma two days later. A killer tornado happened May 25 with no tornado watch in the Oklahoma City area, and Dayton was slammed by tornadoes on a day none was anticipated in the morning.

As importantly, the tornado barrages into towns and cities have been well warned by the National Weather Service. It is apparent that lifesaving action was apparently taken in most cases. Given the major tornado swarm, it is fortunate the toll is not higher.

With some luck, the current onslaught should be the last of this series. Weather modeling indicates a more tranquil pattern will try to take over, heading into June. How long that will last is another question.

2990-degree days so far
TOP STORIES
The Download
Stay up to date on the news from Silicon Valley, and how to take back control of your data and devices.
Gen Z workers demand flexibility, don’t want to be stuffed in a cubicle
Teens have fled Facebook but are loyal to YouTube, poll shows
After years of sameness, phones are getting delightfully weird again
Try a different topic
Sign in or create a free account to save your preferences
Tweets by @capitalweather