The full moon meets the criteria of a supermoon, passing the Earth near the closest point in its orbit. The moon rising on Monday over the Washington region. (George Jiang/Flickr)
By Jason Samenow

Buds are bursting and magnificent pink flowers are blooming all around as spring takes hold in the Northern Hemisphere. And we have a full moon to honor the moment, aptly called the pink moon.

No, the moon isn’t actually pink, but April’s full moon was given the name as it “heralded the appearance of the moss pink,” according to the Old Farmer’s Almanac.

This year’s pink moon will be especially bold and beautiful as it also a supermoon, meaning it is passing Earth near the closest point in its orbit while 100 percent illuminated.

During this coronavirus pandemic, the moon may offer a welcome distraction and reason to stare at the sky, at a safe distance from others.

April’s pink moon actually marks the third straight month that the full moon has met supermoon criteria, joining March’s worm moon and February’s snow moon. May’s “strawberry moon” will also be a supermoon, the fourth in a row and last of the year.

But this month, the moon will become full less than eight hours after its nearest approach to Earth, making it the closest of the four supermoons. Accordingly, it will technically appear the biggest and brightest of the moons — but not so much that it’s noticeable.

Moonrise will occur between 7 and 7:45 p.m. local time across most of the Lower 48 states. Clouds may interfere with viewing in the eastern third of the nation, but mostly clear skies are predicted in the Plains and Mountain West. Along the West Coast, cloudy skies may obscure the view in coastal sections as well as over much of California, while clear skies are anticipated in the interior portion of the Pacific Northwest.

Here are some images of the moon from Monday, as it was about one day away from fullness:

Suddenly, the moon appeared. #SocialDistancingNow on my bicycle, by the Lincoln Memorial in #DC. @capitalweather pic.twitter.com/6C3m9vUSK0

⁦@capitalweather⁩ not bad for a 40+ year old telescope and an iPhone 8. pic.twitter.com/LPfJWekSW2

.@capitalweather I'm sure you have a ton of these, but the moon was too good not to take a few pictures tonight! 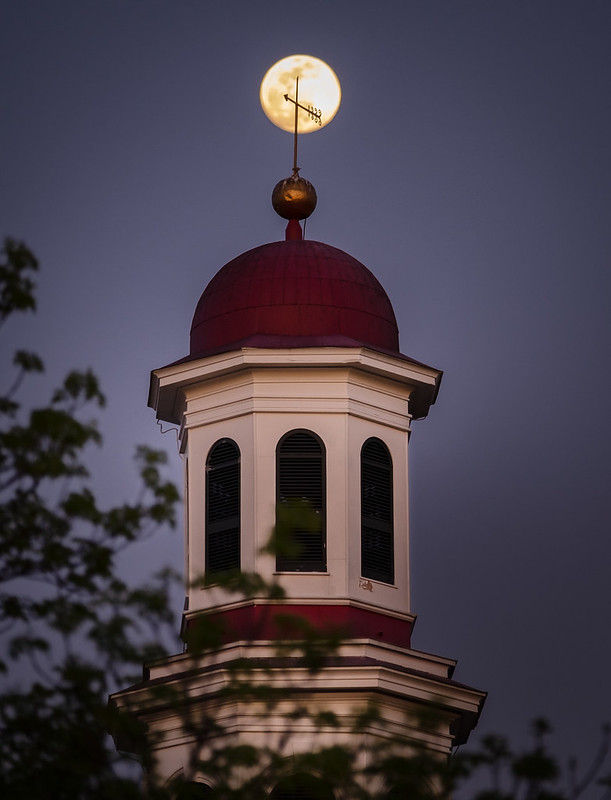 The waxing moon sets in the morning next to the pink neon angels, modeled on the little angels on Raphael's Sistine Madonna, on the Dresden Zwinger in Dresden, Germany, Tuesday. (Robert Michael/DPA/AP)

What is commonly referred to as a 'supermoon' is seen in the sky over the town of Garafia, La Palma, Canary Islands, Spain, early Tuesday. (Miguel Calero/EPA-EFE/REX/Shutterstock)